Home »Driving»SIDEWAYS THROUGH THE SNOW: 2017 Camp 4 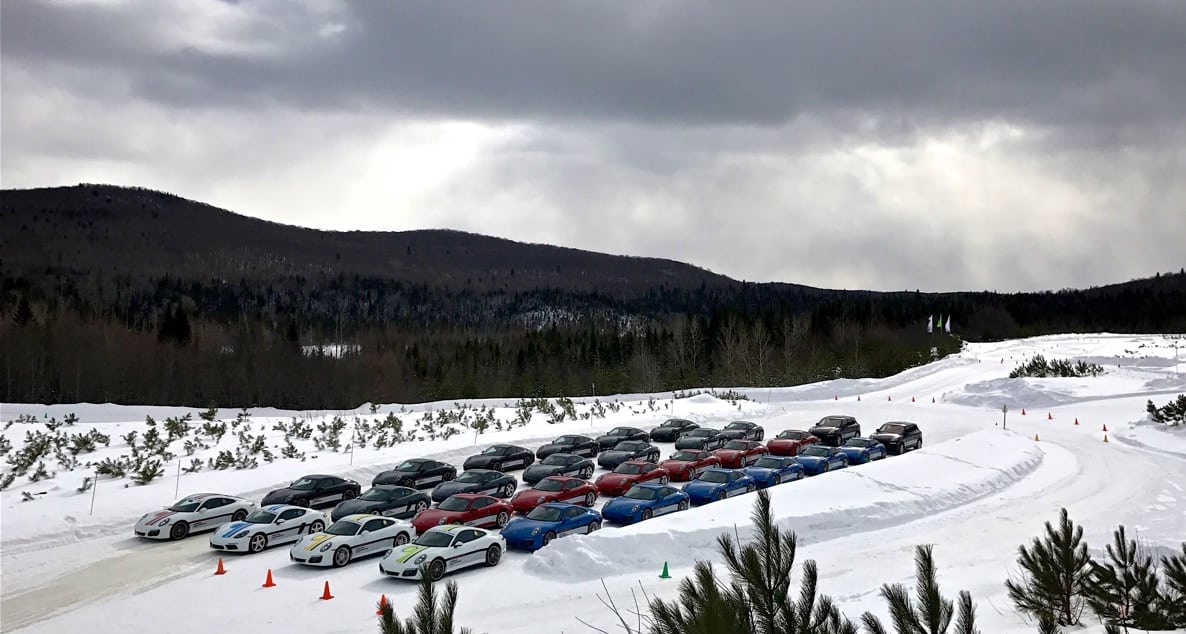 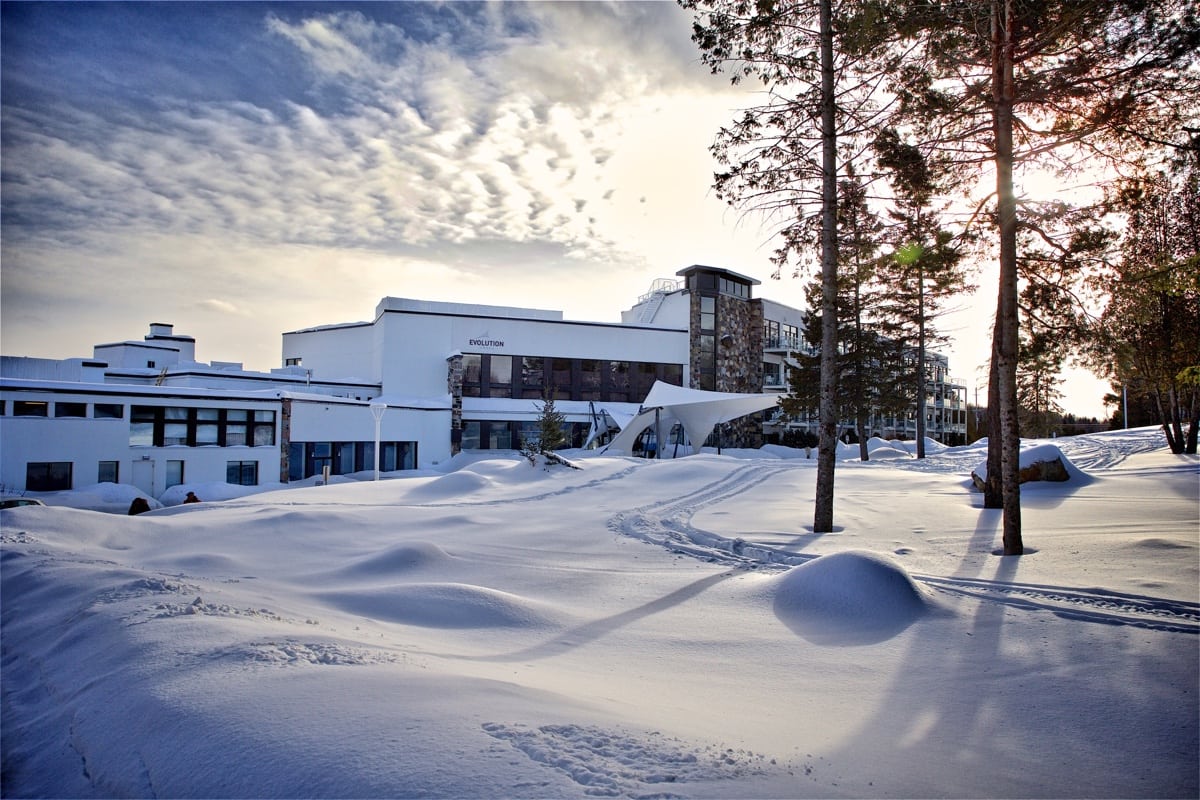 Our home base for Camp4 Canada 2017: the Estérel Resort, in Estérel, Québec, about an hour north of Montreal.

Every February, Porsche Canada takes over a special ice-and-snow-testing facility in the Laurentians called Mecaglisse. Taking a challenging multi elevation summer track, transforming it into a wintry playground for sports cars, it’s called Camp4 Canada, and it’s an amazing combination of driving school, extreme sport, and winter vacation. I was privileged to join a group from Pfaff Porsche to sample this year’s event.

Home base for Camp4 Canada is the Estérel Resort, 39 Chemin Fridolin- Simard, Estérel, QC J0T 1E0, about an hour north of Montreal. Our group of over 40 participants arrived at the hotel separately, and our first chance to acquaint ourselves with each other was at an intimate dinner held in the hotel’s restaurant, overlooking a frozen lake. At dinner we also met the amazing training/ support team Porsche Canada had assembled, led by Jennifer Cooper, who set us up for the next day’s activities. With just one night’s stay during our dealer program (longer programs are available at: http://porschedrivingexperiencecanada.ca/en/about/), we didn’t really get a chance to enjoy the luxury of our amazing rooms with fireplaces, most featuring outdoor Jacuzzis and other five-star amenities such as the Nordic Spa. 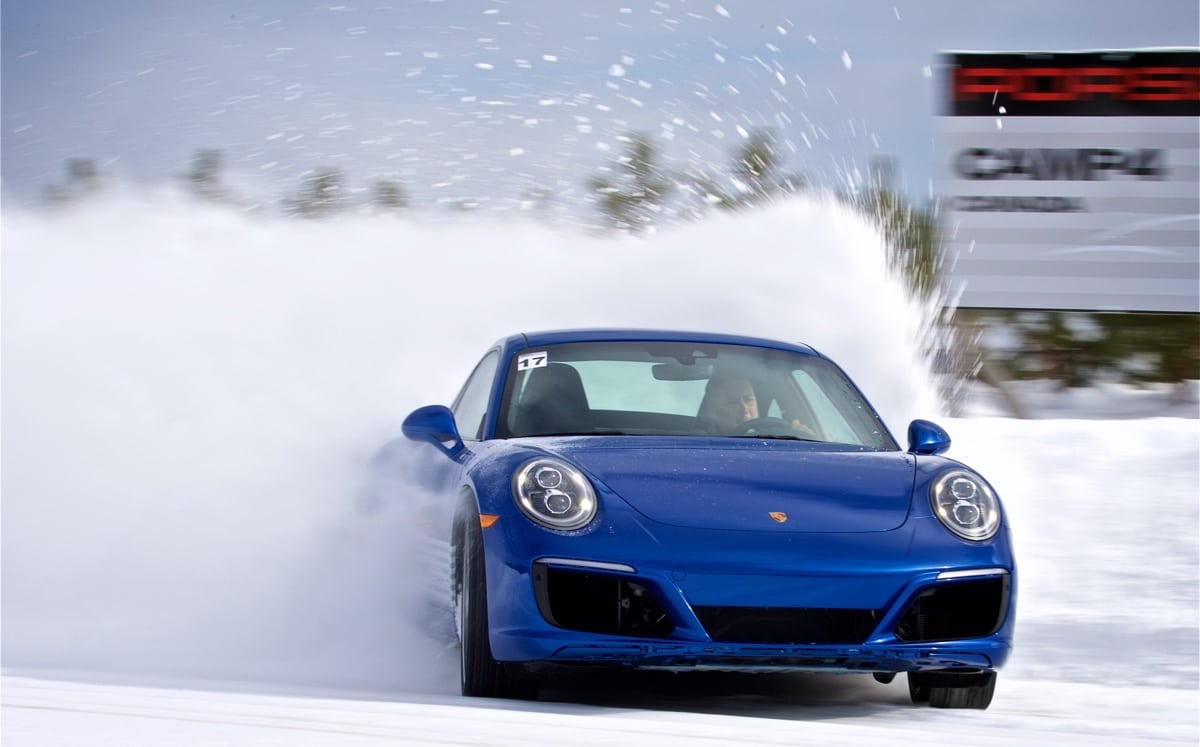 Masterful driving skills being demonstrated by the instructors.

Our action-packed day started with a classroom briefing, discussion of the driving exercises, an introduction to our instructor team, who all had accomplished racing histories – indeed, one of our instructors, Kees Nierop, drove for the Porsche factory at Le Mans in the one-off 961 race car. Jonathan Urlin the lead instructor and presenter did a wonderful job presenting and orchestrating the flow of events, plus demonstrating his masterful driving abilities throughout the day.

After the briefing we were shuttled to Mecaglisse for a full day of exercises behind the wheel of a variety of Porsche sports car models, from the mid-engined Boxster and Cayman pair, to both rear and all-wheel drive 911 Carrera S and 4S. All of the vehicles were brand-new, the latest-generation models with turbocharged, horizontally-opposed engines producing more power and torque than ever! The perfect winter wonderland any Porschephile can imagine. 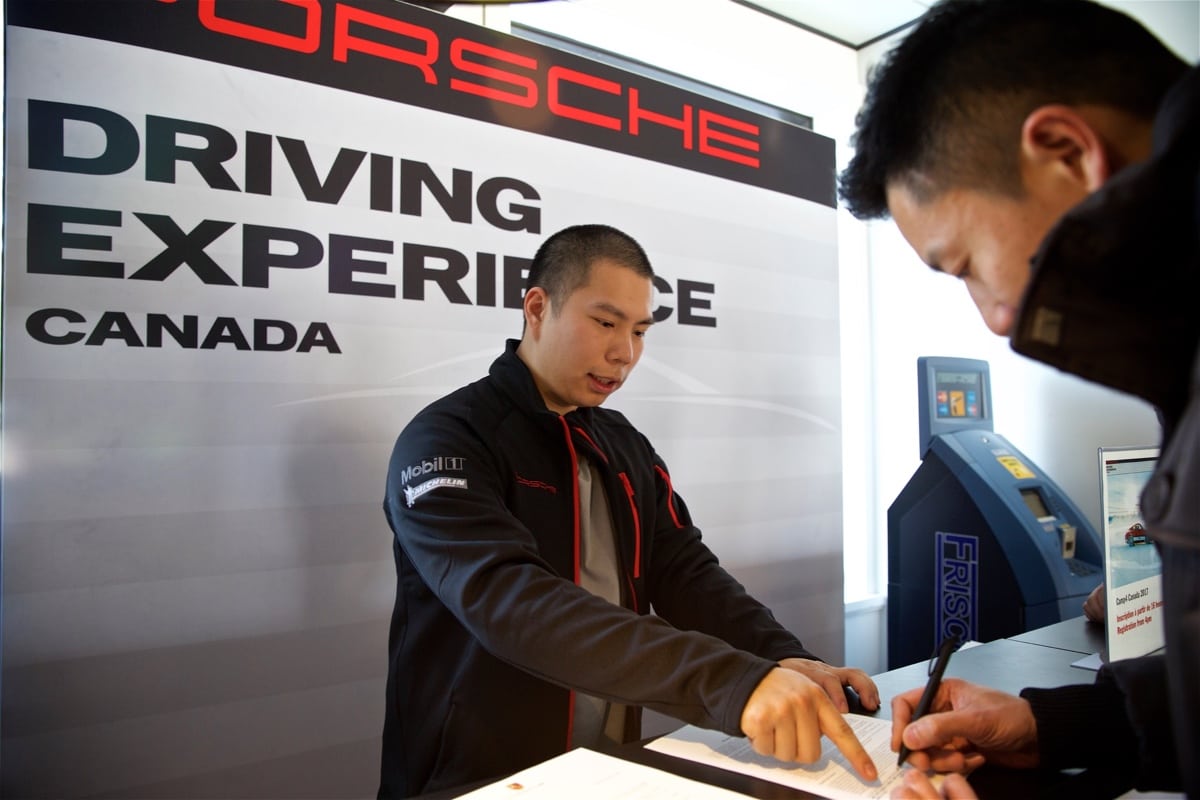 Check-in and registration at Camp4 Canada 2017. 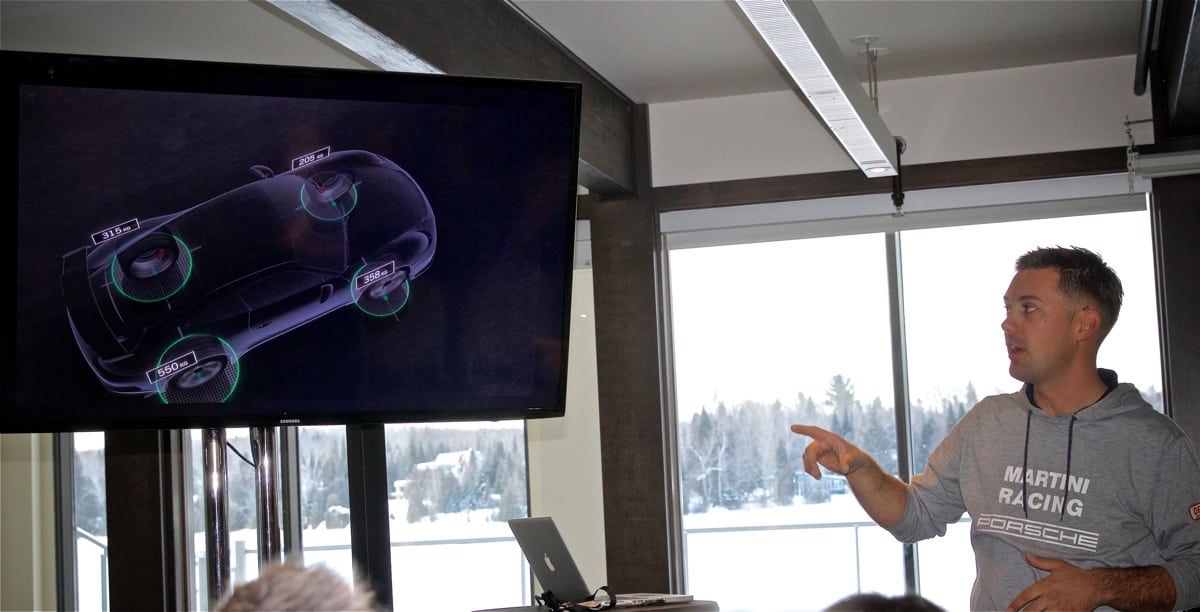 At the classroom briefing we discussed the driving exercises, were introduced to our instructor team, and shown the dynamics of the different drivetrain configurations

The day was divided into four groups of exercises that were designed to teach how each of the different drivetrain configurations behaved under extreme circumstances, with traction and stability control turned off, and with the rear or all four-wheel sliding. Developing our skills on a giant skidpad, as well as several racetracks carved into the snow and ice over weeks of building by repeated watering to a rock-solid ice base, we learned how to unsettle the cars and pitch them into beautiful four-wheel drifts, using the throttle, instead of the steering, to adjust their cornering attitude and drive an autocross course at progressively increasing speeds. After lunch, the instructors brought in the concept of the “Scandinavian flick,” which involves steering in the opposite direction to a corner before using the gas pedal to fling the rear around in the opposite direction, straightening the front wheels and exiting a 90-degree bend in style. 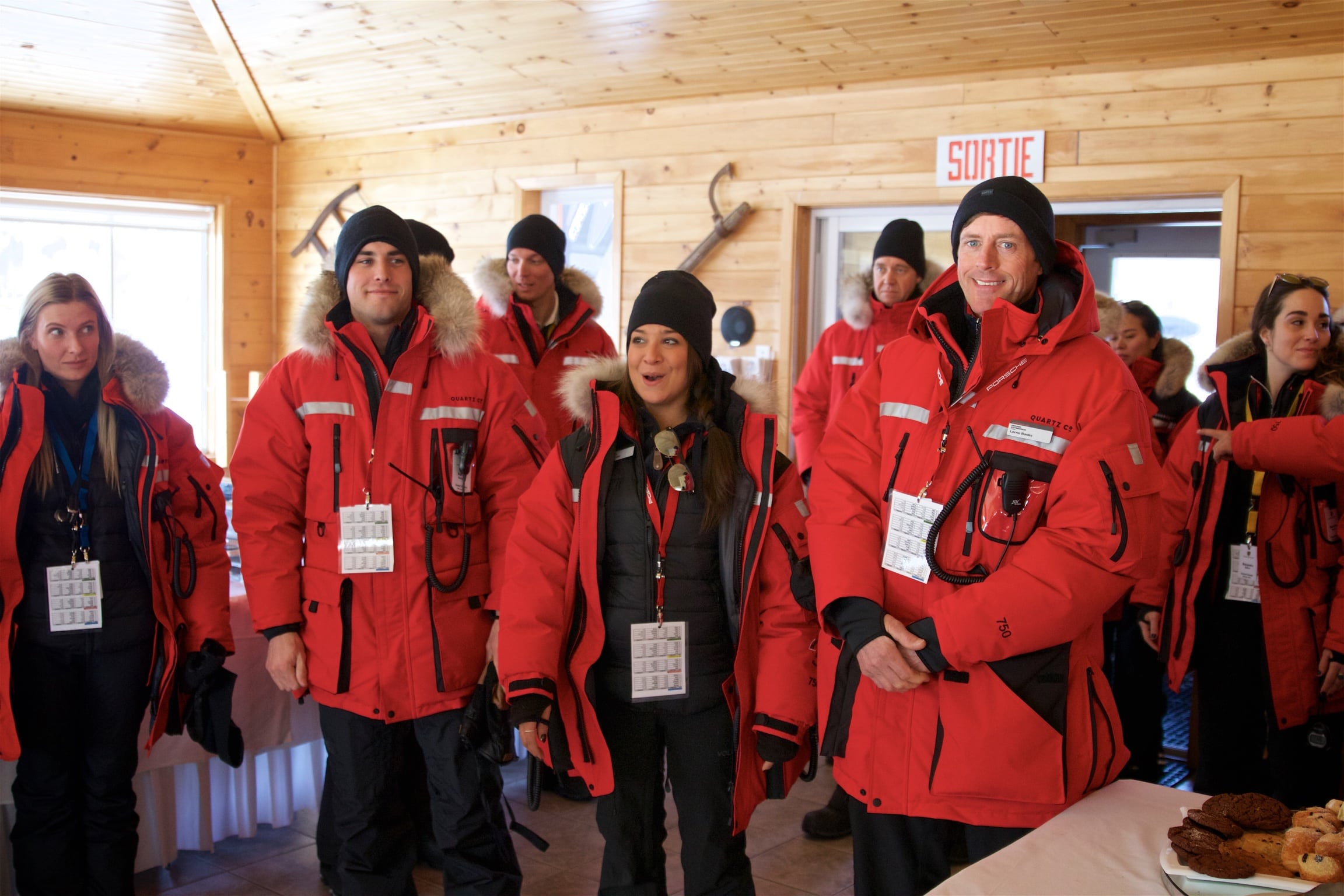 The amazing training and support team assembled by Porsche Canada and led by Jennifer Cooper.

It all came together at the end of the day, where our 32 cars all went out on a giant circuit, allowing us to practice all of the techniques we had learned, and get into a real rhythm with the cars. The final exercise also allowed us to compare the behaviour of all of the cars in an apples-to-apples way. Personally, while I loved the responsiveness of the Boxster and Cayman, and the incredible speed you could carry through corners in the Carrera 4S, the rear-wheel drive Carrera S was easily my favourite. It was easy to get sliding, easy to keep sliding, and made me feel like a hero in every corner. 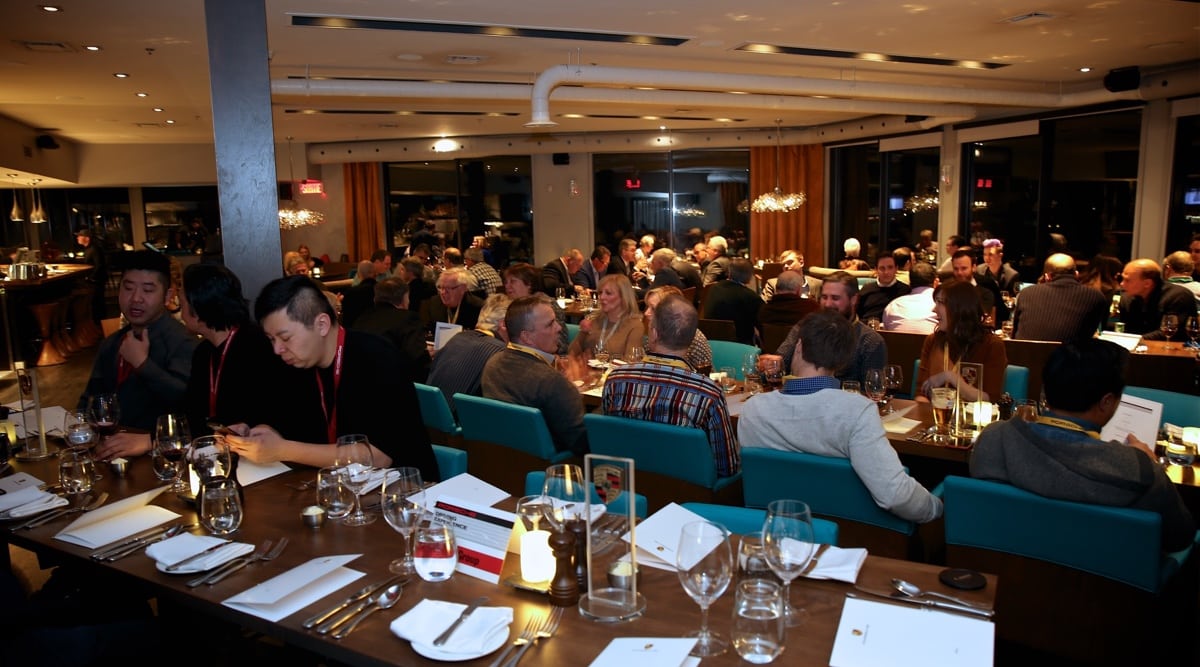 Our group of 40 participants getting acquainted over a sumptuous dinner on our first night. 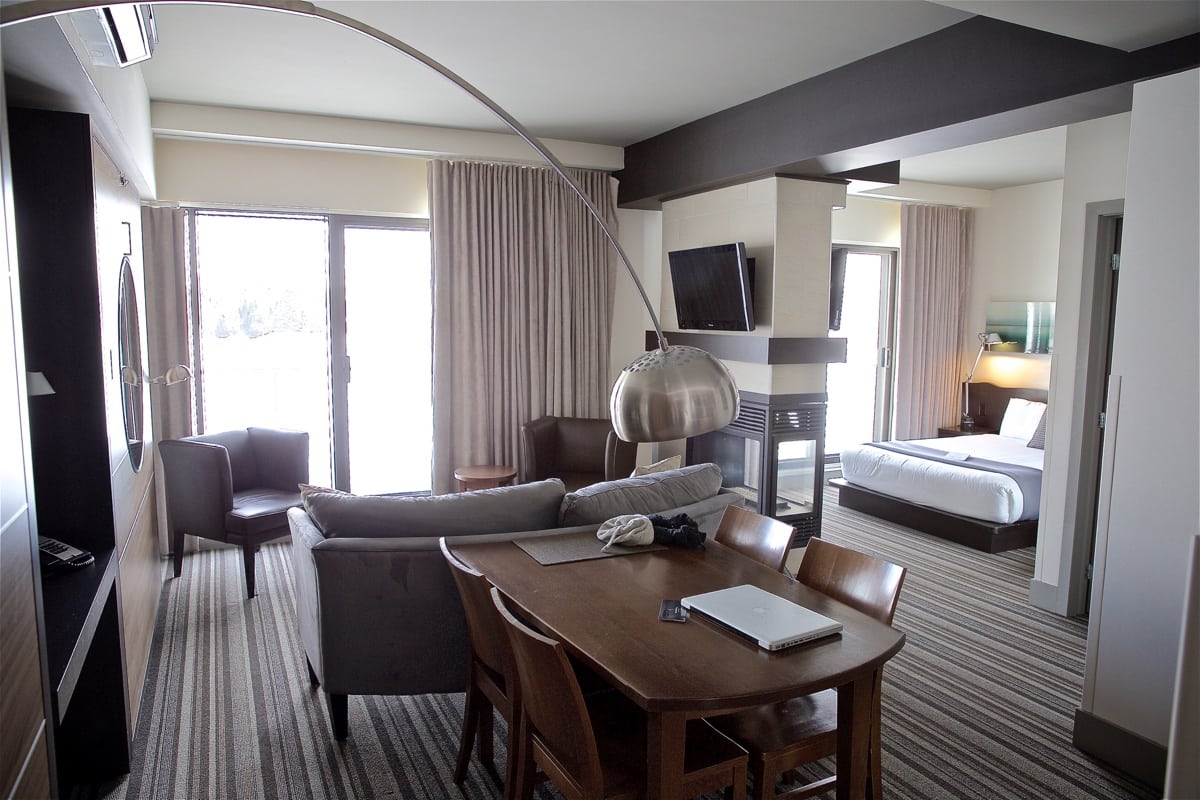 We didn’t get a lot of time to enjoy our fabulous rooms at the resort. 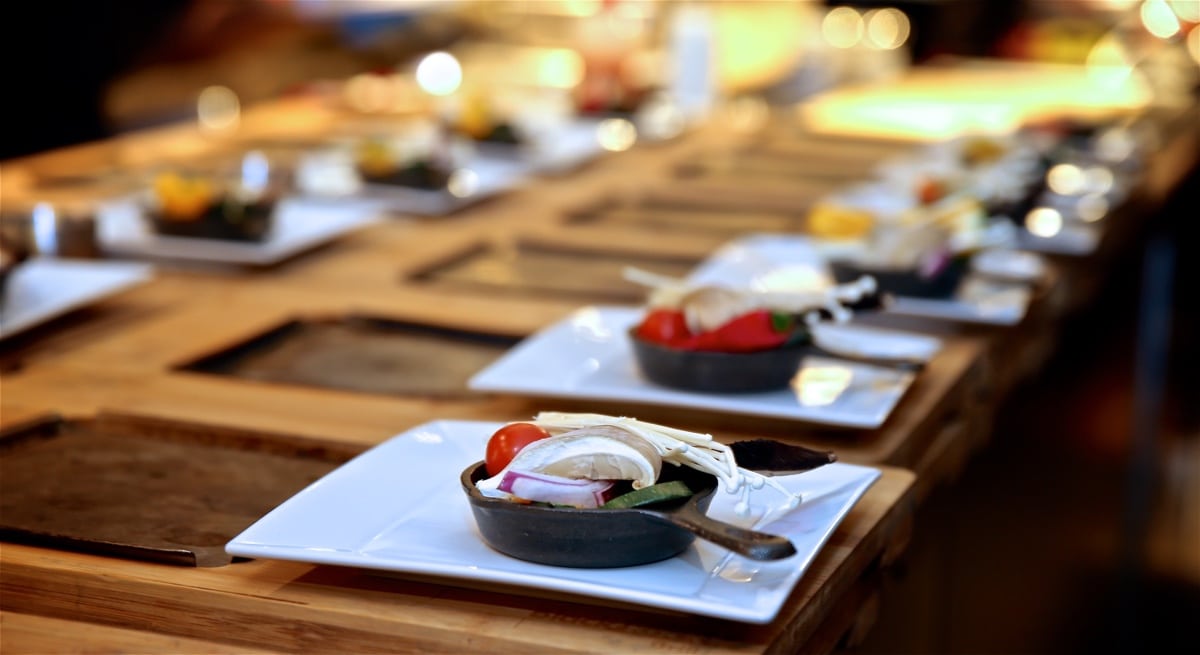 And before we knew it, the day was over, the sun drifting below the horizon as we headed to the airport. I came away from Camp4 with a new-found respect for how capable Porsche sports cars are in the snow—as well as a deep admiration for the people that help make this event the success it is year after year as one of the global must do bucket list events for anyone interested in sports cars. Special thanks from my side go out to the four incredible instructor and support teams presented by Porsche Canada, as well as Ashley Berkel, John Pera, and Alessandra Terzo from Pfaff.

It was also a great pleasure to drive with Peter Groenke and Mike McCarthy of Pfaff Porsche, people that I have known for many, many years, both are true professionals in the world of Porsche dealerships and highly skilled drivers.

At the end of the day, all 32 cars went out on the circuit where we were allowed to practice all the techniques we had learned, get into a real rhythm and compare the behaviour of all of the cars