Another Participant’s take on the Great Smoky Mountain Fall Tour 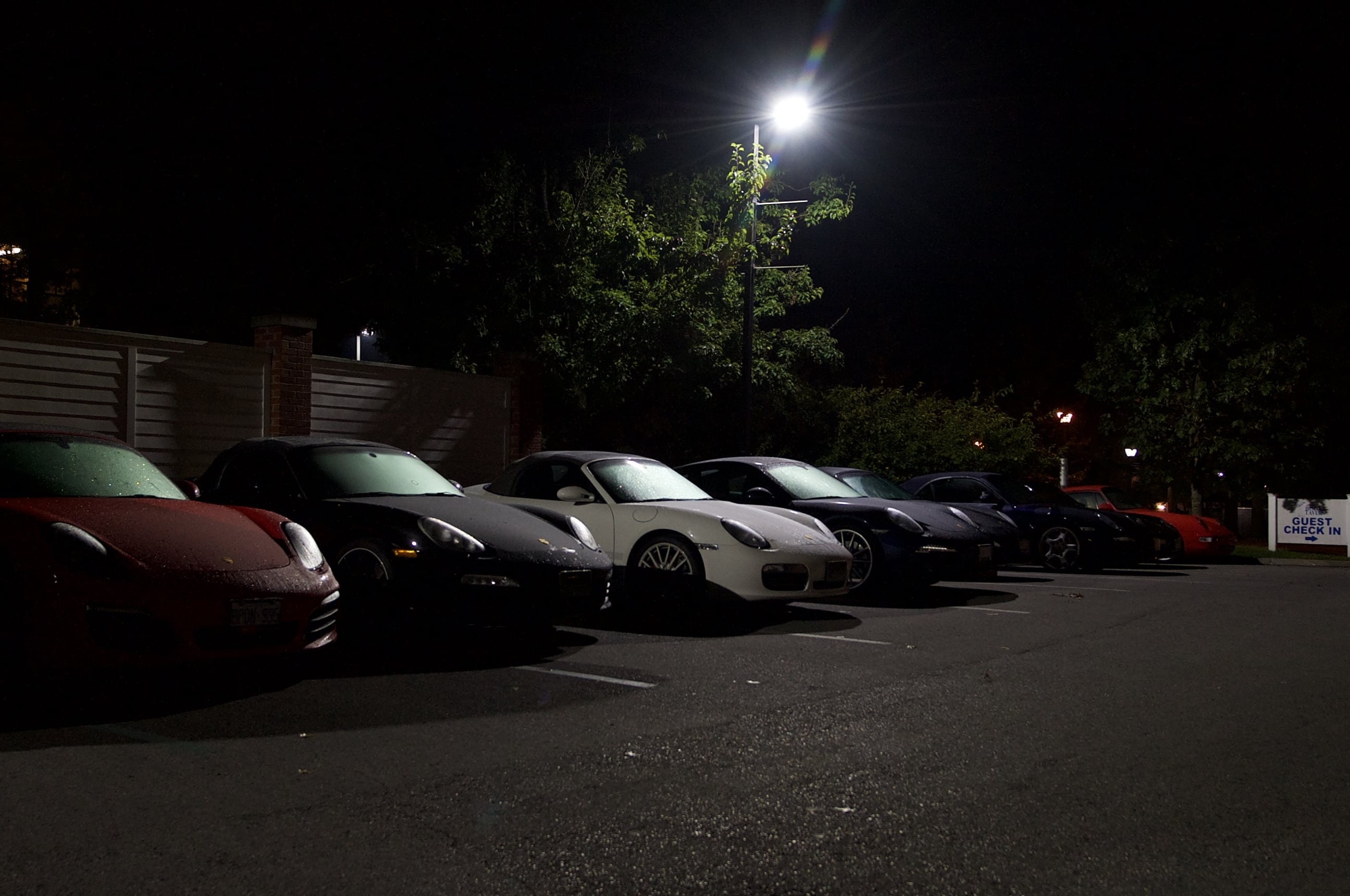 Space for the Great Smoky Mountain Fall Tour (Sept. 29—Oct. 3) was originally limited to just five cars, so some seven months prior to the tour, I registered at the exact time stipulated. Even so, my wife and I found we were second on the list. For interested parties, the number of registrants was soon increased to ten cars, due to demand. We all met up at Caesars Windsor on the evening of Wednesday Sept. 28th in order to be ready for a 6AM Thursday departure. Staff at the casino were very friendly and provided secure underground parking for our Porsches. This was one of many nice touches that we would soon get used to on this trip.

We met as a group privately that night, in one of the Casino lounges, for a briefing and opportunity to get to know each other. All materials and instructions had been forwarded previously but we discovered that the organizer, Jason Figueiredo, leaves nothing to chance—among other things, we discussed contingency plans, and it was agreed that we would drive follow the leader. It became apparent this was not the first trip for many in the group, a good omen.

We’d already fuelled up the car, in preparation for the early departure. One of my (as it turns out) needless worries for the trip had been how often would I have to refuel, and where, and would I slow others down? But Jason had this all covered, having driven the route the previous month. And he’d even accounted for different Porsches models with their 10%+ ethanol restrictions and varying fuel consumptions. We would travel in two groups of five cars, with the lead and trailing cars equipped with radios.

Rain was forecast for the 6AM departure, clearing as we travelled south, but our first challenge was to clear the border as a convoy. The border officials were very accommodating though and our group soon found itself in an early-morning Detroit traffic jam. A weather-related accident slowed our way to Cincinnati but there was sufficient flexibility in the schedule to accommodate this.

We had reservations for noon at a French restaurant named Jean Robert’s Table, and arrived in time but missing a car due to a puncture. It happened nearby, so happily, they were able to obtain a suitable tire and rejoin us at the restaurant while it was being installed. A prix fixe menu had been set for the group—and it was excellent. We find the quality of the bread served to be a good indicator of a restaurant’s competency. This was real French bread and the cuisine was authentic as well. 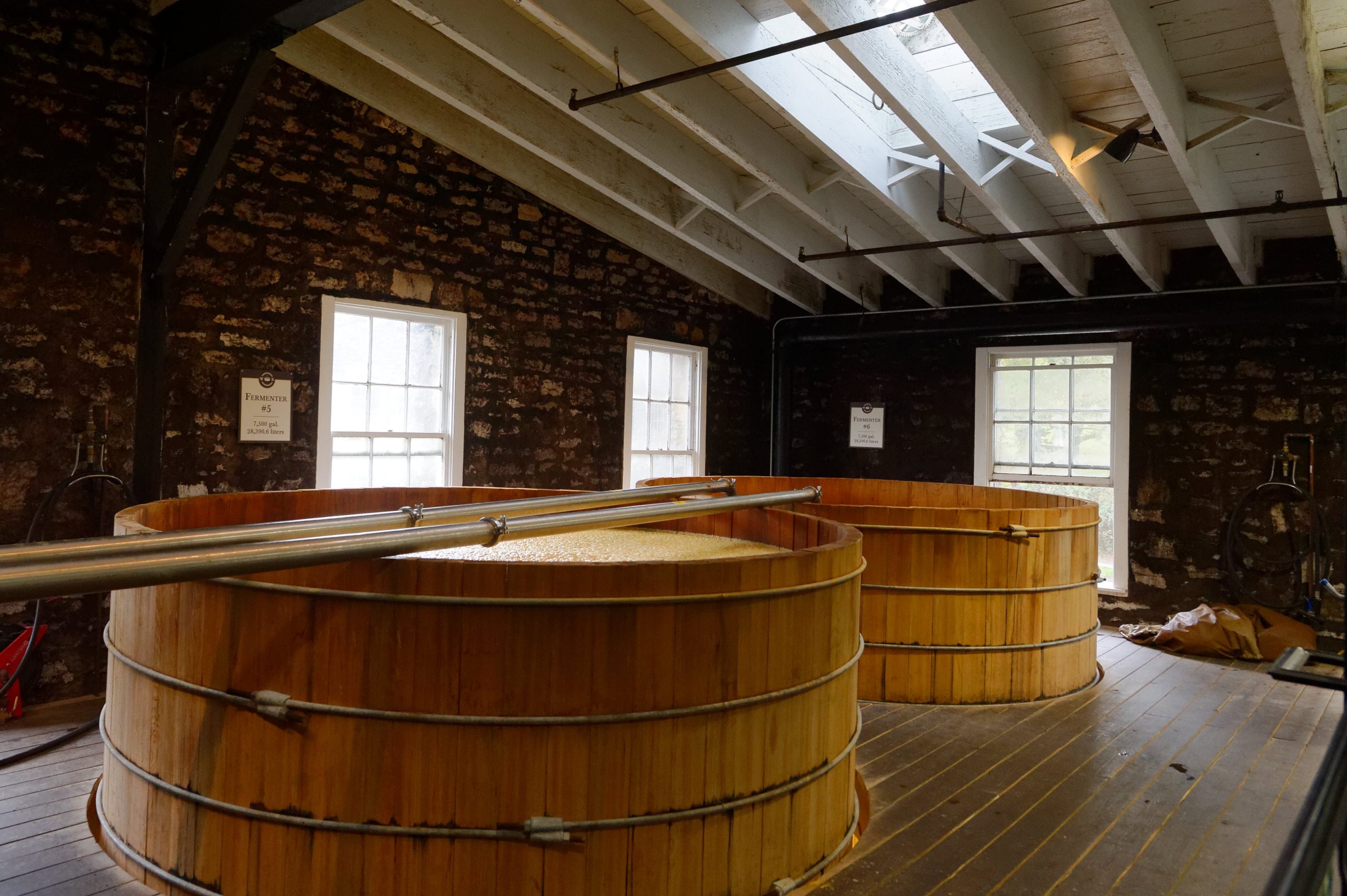 After reaching Kentucky on our first day we enjoyed an afternoon tour of the Woodford Reserve Distillery along with some sampling of Kentucky bourbon.

An afternoon tour of Woodford Reserve Distillery and some Kentucky bourbon sampling still remained before we’d reach our hotel that evening. The weather had improved remarkably by this time and our drive through the Kentucky countryside, past many immaculate horse farms, marked the start of back roads and wonderful scenery.

The Distillery’s tour guide noted that Kentucky water makes the difference in bourbon and race horses. More than 2,000 distilleries existed prior to 1850 and Woodford Reserve Distillery is one of the oldest. The Civil War and Prohibition combined to reduce this number to 12 licensed distilleries today, responsible for 95% of the world’s total bourbon production.

Bourbon production is governed by US law and one peculiarity is the need to use new American oak barrels for maturing the liquor. This results in a substantial number of used barrels being available on the secondary market. Scotch distillers are a major buyer, as are Southern hot sauce makers (Tabasco). Since a new barrel typically costs USD$1,000 it is not unusual for the Scots to be first in line! 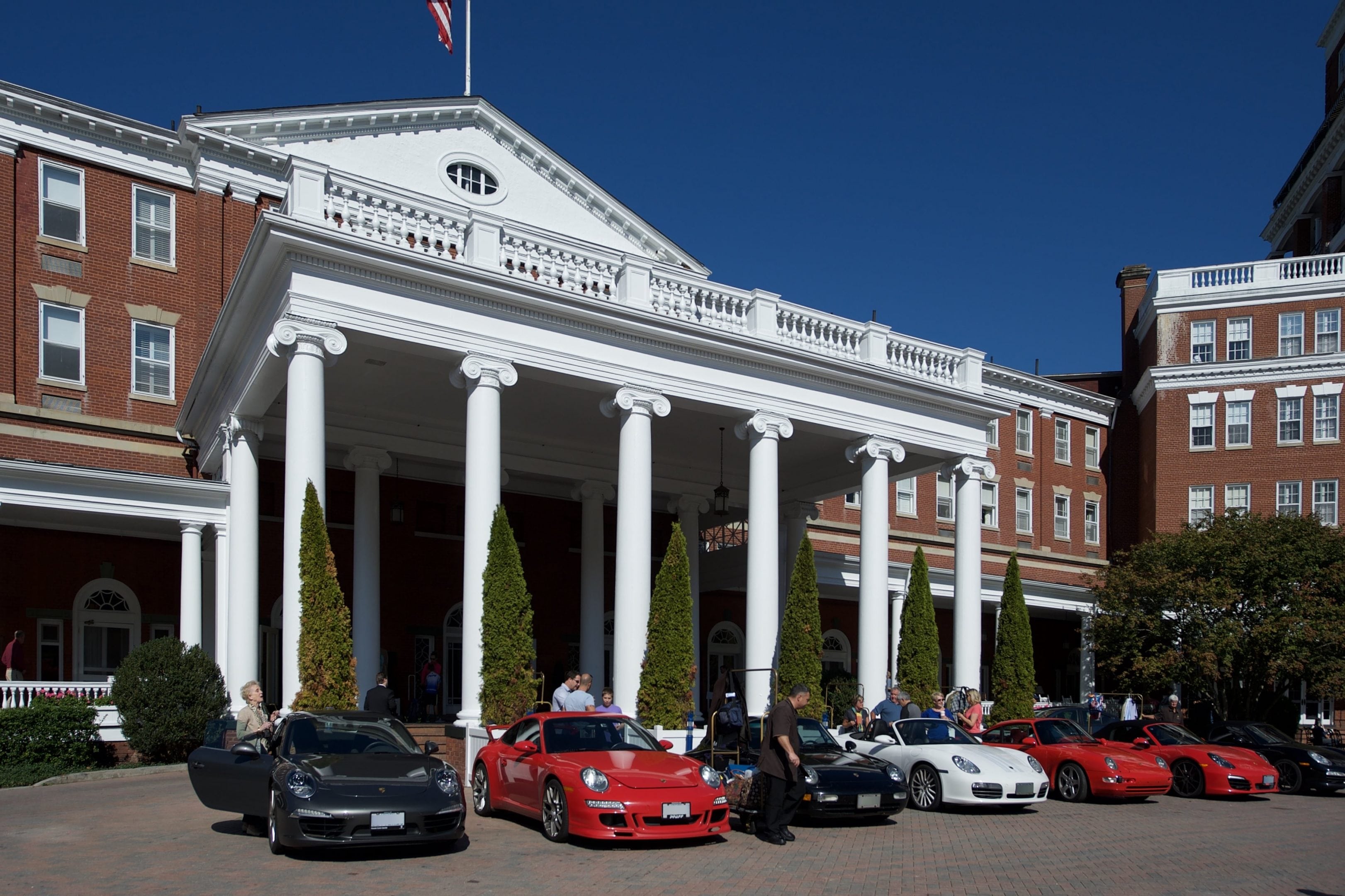 Our first night was at the Boone Tavern Hotel in Beres, Kentucky, complete with a resident ghost!

Driving on, we arrived in Berea—where we’d find our hotel for the evening, the historic Boone Tavern Hotel & Restaurant, which dates back to 1907. It comes with a resident ghost—who we later discovered resided in the room adjacent to ours. Fortunately, it didn’t snore! The property is a story in itself, and with its first-class hospitality, we highly recommend it.

After a leisurely Southern breakfast, we left for Knoxville, Tennessee, on our way to the Devil’s Triangle. The briefing was simple: “Don’t cross the lane markers!” This turned out to be a warmup for the Tail of the Dragon, and it was exhilarating. The route is less travelled than the latter, and was picturesque with no need for speed. Driving the posted limit is thoroughly enjoyable! Later, we dined at the Whitestone Lodge in Kingston, TN, prior to our run through the Tail of the Dragon.

US Route 129 leads through Deals Gap, bordering North Carolina, and is essentially a paved Cherokee Trail, with narrow lanes and no intersecting roads. Oncoming motorcycles use all of their lane—so the cautionary advice to avoid crossing the lines (and the previous practice driving the Devil’s Triangle) worked. There are 311 turns in 11 miles and typical speeds are 60–70km/h. It’s possible to go faster but at these speeds our g-force meter recorded .94g on a right hand turn and .86g on a left hand turn, which is probably more than enough when your wife is on board! 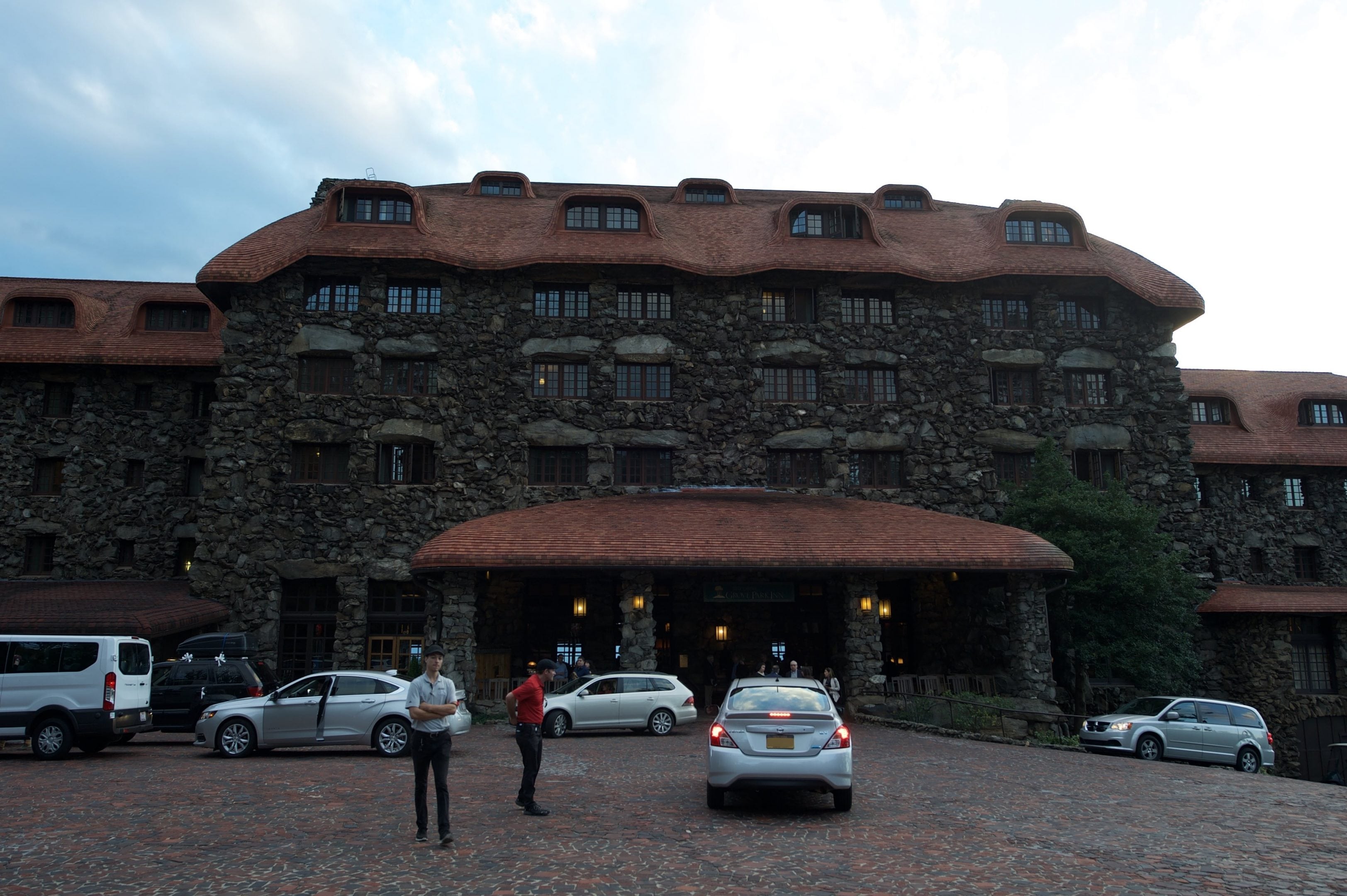 The Omni Grove Park Inn in Ashville, North Carolina, was the site of our second overnight stay.

Following a brief stop at Deals Gap for souvenirs and photos, we proceeded to Moonshiner’s Run and on to US74 for our trip to Asheville, NC. This was a tremendous road for touring. The scenery with its fall colours and interesting terrain left a lasting impression of Tennessee and North Carolina, and a determination for us to return. We arrived at Asheville’s Grove Park Inn in late afternoon, again, to secure parking and a warm Southern welcome. The view from the lounge at sundown was spectacular—even better, I think, after our long and enjoyable drive. 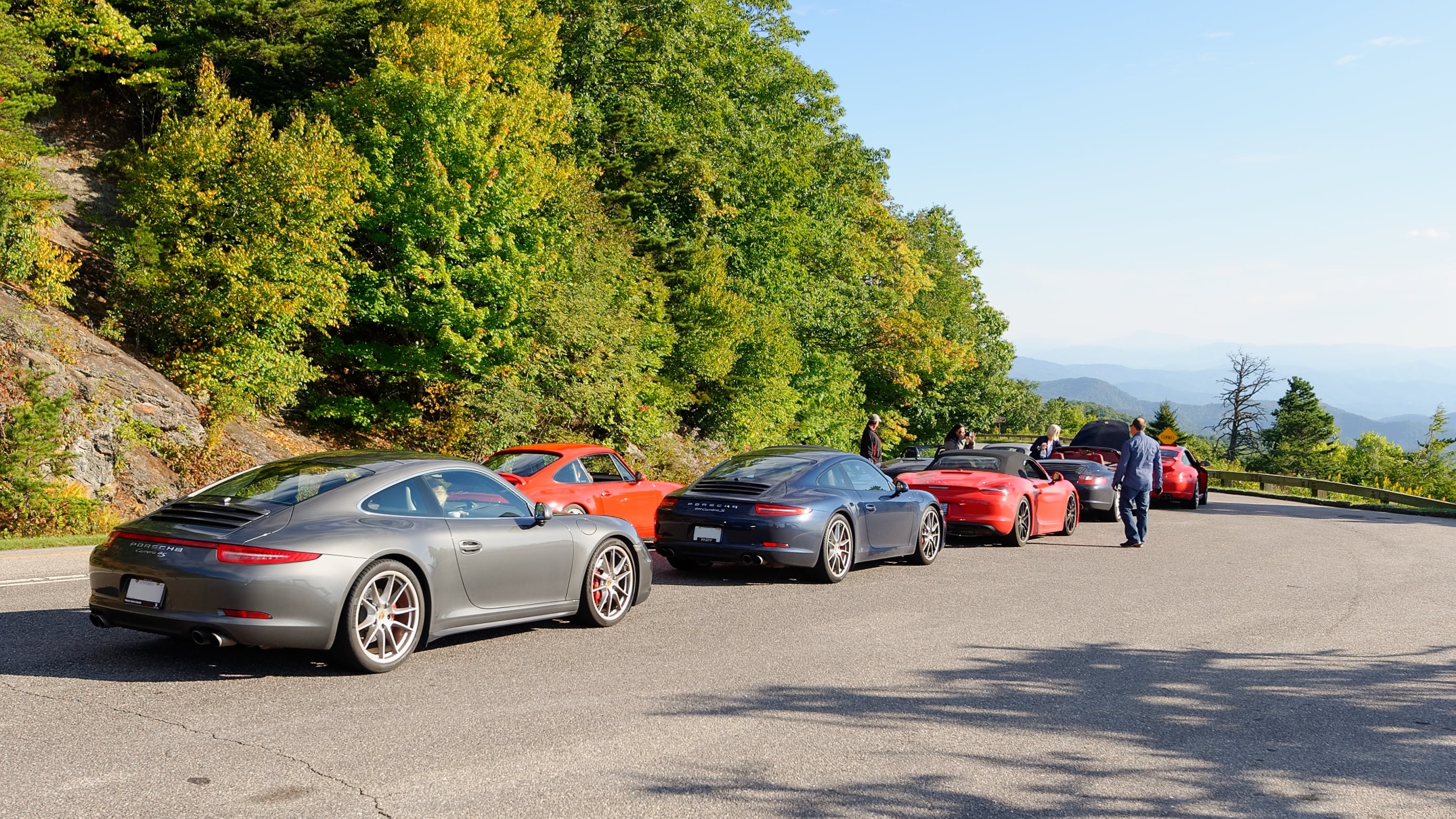 We made good use of the many lookout rest stops. They provided a relaxing break from some intense driving and let us enjoy the fantastic views.

On Saturday, we’d booked a tour of the Biltmore Estate, built in 1895 by George Vanderbilt. This was very much an American version of Downton Abbey. A half-day tour really doesn’t do the place justice, but it is a reason to return.

Sunday, we were off to Hot Springs, Virginia, via the Blue Ridge Parkway, which is another amazing route noted for its views of rolling hills and its absence of trucks. We lunched at Rowlands Restaurant in Blowing Rock, NC—a refined establishment with wonderful cuisine and service. Refreshed, we pressed on to the Omni Homestead Resort in Hot Springs. The resort itself was built in 1766 and is very well maintained. It too had its own resident ghost, this time (thankfully) inhabiting a different floor to ours. It had been a busy few days so nothing could wake us that night, even if it tried. Breakfast here was one of the more memorable meals of the trip—the old-world table service was very agreeable and the English-style breakfast buffet offered all manner of cereals, fruits, cold cuts, pancakes, waffles, and eggs— and condiments included pickles, relishes, compotes and jams in varieties too many to name. The Great Smoky Mountain Fall Tour ended here, so after a second cup of coffee, we went outside to say our goodbyes. Our cars had been brought around for us, our luggage had been loaded, and they were all were lined up, ready for departure and before that, a final photo opportunity.

We made our way home independently, via US219 and US220, which were both in excellent condition and gave great views of the full fall colours. Interstate highways are available but what’s the point when you’re in a Porsche? The route ended near Salamanca, NY, where we spent the night before returning home to Canada.