Photos by Michael A. Coates 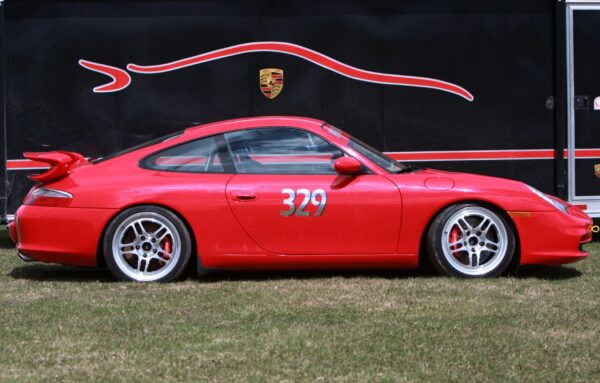 Months of planning and anticipation turned into days of hoping for no rain as the forecast predicted. Well, we had rain, and lots of it on the Friday before the show as a few of our vendors drove out to the venue to deliver cars, clean and prep them for the show, then leave them in a warm shelter overnight. Pfaff delivered their Bronze Edition 991 which made quite a statement in the central area of the building.

Neil Whitlock, who was my right hand man taking care of the vendor bookings for this event, was there with me setting up fencing for the show and shine area, in the rain. My hopes were for the clouds to disperse all of the moisture they contained on the Friday so that the Saturday would be dry. I mentioned to the vendors that even if it was cold no rain would be fine—I got my wish. It didn’t rain—it snowed!

Saturday morning had me driving my 911 through the snow—it was not the way to enjoy a nice spring drive, but as event chair the least I could do is have my Porsche at the event. Kye Wankum arrived with all of the club’s signage and banners, and was a great help, along with past president Mario Marrello. Most of the vendors arrived early to set up, while the event chairs in attendance showed up a little later.

Laurance Yap from Porsche Canada arrived with the new 2013 Cayman and set up immediately to the right of the Pfaff 911. Walter Murray arrived with his race car set-up and he parked the white truck and black trailer with the red race car immediately in front of his trailer. It made a fantastic statement in front of the Markham Fairgrounds sign, welcoming anyone wishing to attend our Annual Open House. 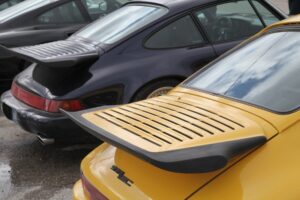 With expectations low due to the cold and snow, the day was quite successful. The parking lot at one point had more than 20 Porsches in front of our building and the foot traffic through the building pleased all of our vendors, who had a good day of sales despite the weather. This is definitely a testament to our membership. The desire to get that beloved Porsche on the road after a long winter break is still alive and well at PCA UCR, where even snow could not break our spirit to attend one of the first club events of the year. One member of our club not only drove from Barrie for the Show and Shine but left early before being recognized for his efforts, apparently concerned that the black clouds looming meant certain snow on his return drive. I do not know his name but I would love for you to contact me so that I can make arrangements for you to receive a small token of our appreciation.

I would like to thank Neil and all the other UCR members who made this event possible, as well as the event chairs who graciously shared their time for the good of the club.

I’m looking forward to meeting many more great members of the PCA UCR throughout the remainder of the driving season as I too reap the rewards of membership and the many opportunities that the club has to offer!