By pcaucr
By Andrew Fitzpatrick, Member at Large 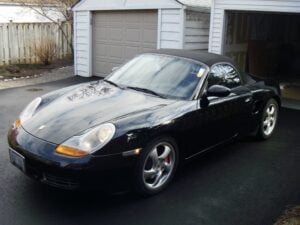 In summertime village cricket is the delight of everyone. Everyone in 1970’s England maybe, but for UCR members Porsche-driving is the summertime delight and rousing the car from its winter slumber is one of the seminal events on the calendar. Given that the GTA seems to have been visited by the ghost of a post-apocalyptic, polar bear free, winter future this year, the big event retreated to what I think is a record in my case, March 13. Toronto is the type of city that fancies itself “progressive”, as if five-cent shopping bags a few bike lanes will somehow offset the 16 coal-fired power plants the Chinese have built in the time it has taken me to type this sentence. Despite these leanings, everyone seems in their glee as far as the winter that wasn’t is concerned with no evidence of tears being shed for the aforementioned bears.

Even though I have been doing this, with a bike and or a Porsche for more than 20 years, (please don’t do the math) there is still that mixture of anticipation and nervous dread as you let the pressure out of the tires and clear the path of patio furniture working yourself up to that first hit of the starter button or turn of the key. Anticipation as you will soon drive something decent with actual steering feel after months of slogging it out in something sensible and more disposable. We can all relate to the anticipation. However, I fear that the dread may be a less universal affliction and maybe I’m the only victim.

On top of the dread list is, “will it start”? This is probably a hangover from my days of old Japanese motorcycles as starting after months, sometimes five or six months, in the parent’s basement was not always a sure thing. Batteries would be frantically charged and carburetors, remember carburetors, would be pulled off for a fishing-line cleaning. I’d follow the advice of the magazines and pull out the battery in the fall and pour in the stabilizer, but I swear that today’s fuel stabilizers work much better than those in the 80’s. In my pre-battery maintainer world, charging would be crammed into the hours before the intended first ride. I bought my share of new batteries. Although even back in the bad-old days the 944, with a boost, always fired up first thing. By comparison today’s fuel stabilizers and fancy cigarette lighter charger/maintainers are wonders of science and the best thing that ever happened to the winter-storing Porsche owner. Employing these modern marvels, starting the Boxster for the first time in the spring has been a non-event. This year was no exception.

Once the thing starts another of my psychiatric-type issues take over. I call it hypocardria (I really wish I could copyright that) and I bet that I’m not alone in my suffering. If the below symptoms sound familiar, contact me and we can start a support group. Hypocardria is a chronic illness in which the sufferer is obsessed with the health of their automobile and is convinced, in the total absence of any evidence, that there is something wrong with their car. It is characterized by manic attention to the sounds being emitted, especially those coming from the engine compartment. If you find yourself turning off the radio so that you can better hear some perceived strange noise, you likely have hypocardria. If you turn off the radio and the fan and put up the windows to block out the din from the road, you definitely have hypocardria. There seems to be something of a gender bias to the disease as sounds heard by men are often undetectable by their female companions. Victims have also been known to get down on the ground flashlight in hand looking for wet spots where there had previously been only dry engine. The disease is much more prevalent among those who own cars that are particularly expensive to maintain and that are know to generate enormous, Kia-sized, repair bills. There are two known cures for hypocardria, one is called a warranty. Unfortunately this cure lasts for a limited time before its potency wears off. The other, much more elusive cure, is called unlimited financial resources.

Sure enough, I was convinced that there was a tick-tick-tick that was not there last year. I babied it around the block a few times, radio and heater off, until I convinced myself that it had gone away or that it sounded just like that when it was shut down in December. Either way approximately 100 km later all seems well and everything, including the convertible top, still works. Did I mention that I’m loving the weather?

As much as you look forward to getting the car back on the road, the one downside is that all of those little problems that you put off dealing with in the fall have not magically taken care of themselves. I really need brake pads. The stock pads on the car lasted 12,000 km, or perhaps more to the point, six track weekends. So that has to be addressed.

Then there is the whole intermediate shaft bearing issue. For those of you who don’t know, the M96 engine in the 1997-2008 cars (other than the late air cooled cars and Turbos and GT3/2s) have been known to suffer from catastrophic engine failure due to a failed intermediate shaft bearing. Rumour is that the 3.2 in my Boxster S is one of the least likely to fail, but it can still fail. With my CPO warranty having run out last summer I’m a little more nervous every day. I’ve started the process of talking to some independent shops and the dealers with the thought that I’d have an aftermarket or updated factory part installed. I will write about this at length in the future and let you know how it goes. If you have replaced your IMS bearing, you could help me out by posting a comment describing the experience. In the meantime, happy spring.

On Being a Porsche Rookie