We imprint in our minds our baby’s first smile, first words (“Da!” in my case), first time crawling, first time walking, first time riding a bike… and so on. In our family, our son Pietro’s first experience driving a car seems to especially stand out – you see, he’d just turned three.

Pietro excitedly got into his new birthday gift—a pedal-powered Jeep—and then, after building some confidence, strategically positioned the Jeep on the stone entranceway outside the front door. He then accelerated with incred­ible speed, launched off the four-inch top step with a slight turn, locked the brakes (i.e., stopped pedaling), power slid 90-degrees, then pedaled himself off the next step with a huge smile on his face. I was very proud, and then it hit me: this kid was going to be trouble when he gets his driver’s license!

Fast forward many years to when Pietro was enrolled in an entry-level driver-training course, with his G1, and I—who’d been driving for more than 30 years—went to my first Porsche Drivers Education event. I thought, “I should have done this 30 years ago!” – so when the opportunity came to offer my son a street-survival version, in his own car, we signed him up for the Tire Rack Street Survival School. 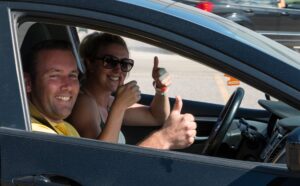 The day (September 27th) started off a bit foggy, and not just because we had to get up at 6am to get to the event in time. No worries, as after we’d arrived in Brampton, registered, and enjoyed the complimentary Tim Horton’s coffee and donuts, the sun burned off the fog and revealed a bright sunny day.

The event began and the 43 student drivers were teamed up one-on-one with in-car coaches. All volunteers, the coaches are signed-off advanced driv­ers from the Porsche Club and BMW Club’s Driver Education programs, and were there to guide the students and help them have a safe and fun day. I must say, some of the student drivers had a peculiar look, like “What am I doing here?” 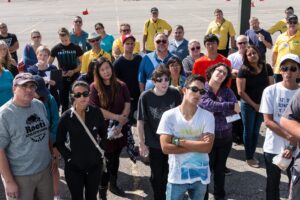 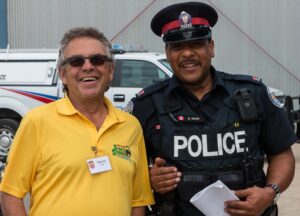 The rest of us—the proud parents— dispersed around the venue to get the best view of our loved ones as they pushed their and their car’s abilities at the various skill stations that had been set up. We could see that as they repeated the car-control exercises, the students got faster and were better able to anticipate troubles and more safely manoeuver around them. The day progressed with a perfect balance of driving and classroom exercises.

A special visit by Constable Hugh Smith led to a lively discussion on traffic laws in Ontario, including some clarification about handheld devices and other more seri­ous offences. It was a real eye-opener.

Another interesting speaker was an insurance broker from Martin Merry & Reid. He explained the benefits of Intact Insurance’s “My Driving Discount”, a GPS track­ing device you put in your vehicle for six months in order to get a discount of 5% to 25%. Some lively discussion regarding privacy followed, and most of the audience’s concerns were promptly addressed. 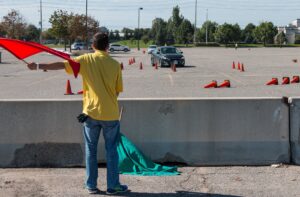 Evasive manoeuvres exercise with a volunteer flagger on a course marked out in cones.

After a tasty lunch, we were treated to a cou­ple of explosions! Controlled airbag inflations, that is – demonstrating the powerful forces involved, and the importance of driving so they never deploy! Then, off to sit in an 18-wheel truck in order to experience the visibility (or lack thereof) that a truck driver has, and why we should be very careful when driving around them. 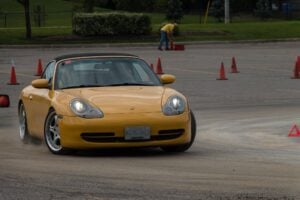 A wonderful team of volunteers then rearranged the traffic cones for three more exer­cises: a figure eight dusted with cracked corn to create a slippery surface, a combined skills exercise, and a distracted driving exercise. Once again, we parents watched in earnest and with pride as our children recalled all they’d been taught and displayed a symphony of new driving skills.

The day was drawing to a close, but with lots of excitement about what was still to come. The drivers and coaches finished up, then we all gathered to see the students presented their certificates. As we stood there, I noticed that every student gleamed with pride and new found confidence.

Thanks to the myriad of organizers and volunteers (54, I’m told)—led by our very own Hazel de Burgh—for all their efforts in making our streets and our most precious gift, our children, safer!

Editor’s Note: The dates and locations for next year’s events will be announced in the next few months – in Provinz and on UCR’s website. Stay tuned!