From what I could see of Strasbourg from the train station, it looked like a lovely city, but my attention was suddenly distracted by the rail clerk using the word, ‘grève’ (strike). But let’s start at the beginning of our journey.

My good friend and fellow UCR member Michael MacDonald and I had decided to put a checkmark beside entries on our personal bucket-lists and it was a famous one at that: the 24 Hours of Le Mans.

On the way to striking off that event was a side trip to the Porsche Museum, a Porsche factory tour and while we were in Stuttgart, a visit to the Mercedes Museum. OK, so we got carried away. Michael crossed off a total of four bucket-list items while I ticked Le Mans off my list on this trip.

We also had, (thanks to help from Laurence Yap, until recently Porsche Canada’s Marketing Manager) a personal tour of the Porsche Archives by its Director, Dieter Landenberger, where we were shown some amazing racing artifacts in the film and photo archives. We saw Ferry Porsche’s famous Stool-Umbrella combination that he used at Le Mans, one of Hans Stuck Jr. racing helmets, a huge 1/8th scale chocolate 911, and many other incredible items, including gifts that Porsche has collected, that are in storage, waiting for the day they can be shown in the museum proper.

As an aside, the Porsche Archives collects every single article, book and magazine written anywhere in the world that concern Porsche cars; this also includes publications from Porsche clubs world wide, including Provinz.

So after an enjoyable few days in Germany—no Autobahn this time—off we went to Le Mans by train. After an eventful trip that included a detour to Paris thanks to that strike, we finally made it to Le Mans. It’s a pretty little burg but our objective was the track. A tram takes you through the town of Le Mans to a station just outside the gates of the track.

Le Mans—what an absolutely massive place. A lap is over 13.6-km long. Think about a track three and a half to four times the size of CTMP’s GP track, without taking into account all of the land around the outside of the track. One could make a fortune here renting folding bikes to the spectators. The amount of walking, the heat. Just be in reasonable shape is my advice. And bring more money than you think you’ll need. A beer is seven Euros.

We were camping outside the track proper, in what is called the Blu Sud (blue south) area near the Maison Blanche kink which made it a few kilometres walk each way to our grandstand seats on the front straight.

We were joined in the grandstand by two other friends from Toronto who were staying in a family villa outside town. We didn’t mention how nice our tent was…

Is there anything better than a warm, clear summer night at Le Mans, having a few cool ones while watching qualifying until midnight? A sunset over the Dunlop Bridge to our left–the famous Ford Chicane Ferris wheel glowing in the fading light to our right, and the hard-working Porsche crews across track from us. Brilliant.

The last sliver of light faded at close to 11:00pm, while sunrise was at 5:00am! Qualifying takes place on Thursdays until midnight. Afterwards the track is closed and re-opened for local traffic, which we found out is when all the local crazies come out and drive around, attempting burn outs and the like.

Meanwhile in the town centre, thousands show up at noon Friday for the driver’s parade. We thought we would avoid those crowds in town, only to encounter a huge crush during the free Friday pit walk. Lots of DNA transfers attempting to move around pit lane with all the thousands of other sweaty people…

I did a little fan demographic study here. The line up for the men’s washrooms at Le Mans was averaging 15 minutes long. The lineup for the ladies washroom: Oh wait—there wasn’t one!

The start of the race is amazing! They played the theme  song from 2001: A Space Odyssey and timed it perfectly  as the leading Toyota prototype along with the rest of the  P1 field blasted out of the Ford chicane and along the front  straight past Fernando Alonzo waving the green flag.

During the early evening we walked down to the Porsche  curves to watch the action. What a set of corners! There is  very little room for error in this series of S-bends and the  speeds the LMP1s carry through here is incredible. There  can be no misunderstandings between the P1 class cars  and the GT class passing each other—arguments here don’t  end well.

When we arrived at the track on Wednesday afternoon  all everyone could talk about was the crash of Audi # 1 in  the Porsche Curves during practice and how it looked like  a plane crash. Luckily for the Audi driver Luc Duval, he  walked away despite the car having no windscreen, roof,  bodywork or any wheels. When I saw the car and the video  of the crash I remarked that Duval should buy a Lotto  ticket—it was that bad.

What can you say about Le Mans at night? It’s magical, exciting,  colourful and LOUD? It’s all of that, and also tiring.

We couldn’t stay up for the whole event due to loss of  sleep during Friday night’s noise—World Cup qualifying  games—so somewhere around midnight we walked back to  the campsite and bed.  Around 5:30am we  were up and heading  back to our seats for the  rest of the race.

Could it really happen?  With three hours to go,  the brand new Porsche  919 prototype was in  the lead, with former  F1 Red Bull driver  Mark Webber driving.  But then it slowed coming  out of the final chicane  on the Mulsanne  and dribbled around  the rest of the circuit on  battery power to retire  to the pits. 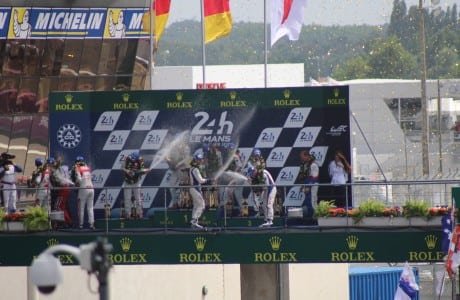 By 3 o’clock it was all over, and Audi had won, again. For  the first time in more than 20 years the organizers allowed  the field a lap of honour after the checkered flag, which  was really neat.

Two hours after the event, except for the private jets taking  off behind us at  the small airport,  it was all quiet at  Le Mans.

The traffic jams  are as legendary  here as you may  have heard. Why  the Brits drive  to this race is a  mystery. I think  it’s a Dunkirk  revival thing. As  we walked back to  our campsite late  Sunday afternoon  many of the cars  we passed had shut  off their engines as  they weren’t going  anywhere soon. Many were still there past 9pm.

Five on Monday morning came quickly for us. We had a  one hour walk around the track to the Tertre Rouge corner  to catch the tram into town for the direct train to Charles  de Gaulle airport in Paris. As we got to the Le Mans train  station and checked our train times we saw “train cancelled  – strike”. Seriously?

Again we headed to the Montparnasse station, on the  opposite side of the City from the airport. Now the stakes  were a lot higher—we couldn’t miss this flight. There are  no flight refunds if we are late.

Thankfully Michael was getting reception on his phone  and googled as fast as he could to find us a direct bus from  the train station to the airport to avoid an uncertain Metro  experience. 16€ each.

Le Mans is an experience unlike any other race event  outside of Indianapolis and Monaco. Everywhere you  stand at Circuit de la Sarthe you’re standing at a site with  over 90 years of history, some great and some tragic. If you  have the chance and you’re in France in June and you’re  tired of shopping in Paris, (yeah, it could happen…really)  you have to go–pack patience and a sense of humour and  you’ll be fine.