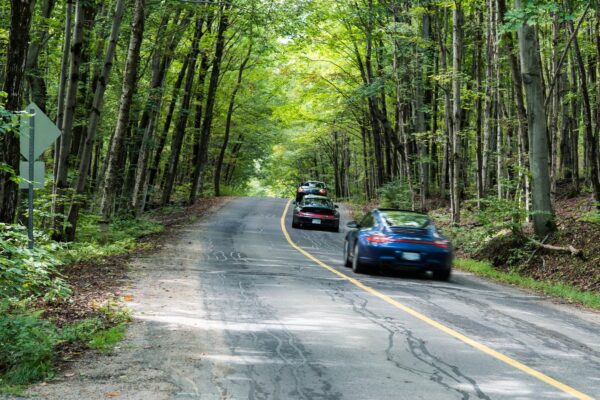 Muskoka is a an alluring place with its rolling hills, beautiful lakes, green meadows, dense forests and dizzying winding roads…perfect for a car rally…in the summer. Planning the route was an adventure and my work was made easy, as Walter Murray, event planner, knew quite a few roads in the area. Consequently, no time was wasted designing the rally route. Thanks to both Sheila and Walter for hosting us and making us feel at home on their lovely property. Dave and Anne Forbes’s hospitality on Friday evening was also appreciated by rally participants, who were also able to share their passion for art. 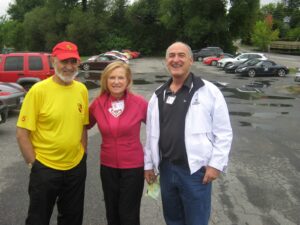 On Saturday morning, at 8:30 am, I met all the rally participants at the drivers’ briefing. The forecast called for a rainy day but the shiny Porsches lined up with their enthusiastic owners made for a pleasant sight. After the briefing, the cars lined up and car #1, driven by Rosemary and John Adam, was off at 9:44 am. The send-off was reminiscent of a parade as each car drove off, engines roaring, one after another until car 43, with Hazel De Burgh and Martin Tekela.

After 90km through splendid cottage country, lunch was held at a wonderful restaurant by the river, in Huntsville. At this stage two cars were tied for first place, car 42 driven by Laurie and Ernst Johle and 43, with Martin Tekela and Hazel De Burgh. Ten cars were close behind with only 3-6 points lost. This was headed to be a tight competition. Anyone could come out a winner.

After lunch the rain made its debut. By the time it hit its maximum force, cars were rolling in at control four, where they were greeted by Sabir, a completely drenched but smiling control marshal. All the cars were doing well with the exception of car 26, driven by Peter and Beth Oakes. After this control, a slew of events caused several cars to lose points. One car reversed into a ditch and lost 140 points, another (Sheila Harwood and Lucille Beaumont) had difficulty finding the control four (Sheila had a good laugh when she found out it was in front of her home). At the end of the day only 10 points separated the first 13 cars. The Johles in car 42 led the pack with four points, with cars 40 (Brian and Wendy Vandusen) and 43 (Martin and Hazel) tied at six points each. 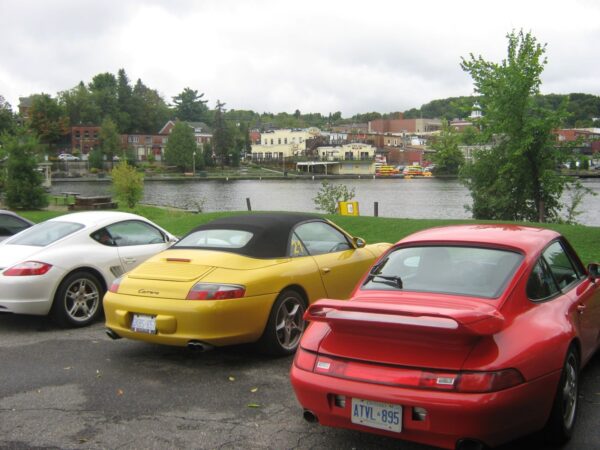 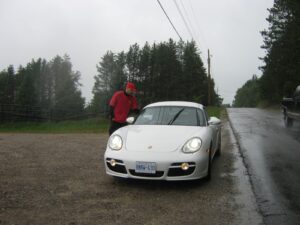 Sunday’s skies were a wonderful contrast to the day before. The day was brighter and car 43 led the way with their yellow t-shirts, taking off at 9:45 am. The competition intensified, as participants knew that the race was tight and every minute mattered. Novices were intent on improving their scores, as they got used to rally route techniques. These efforts paid off well as very few points were lost. 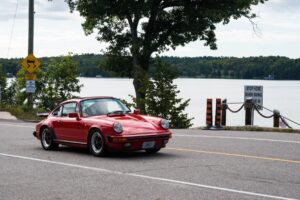 The rally finished at Gravenhurst. Lunch was served and many prizes given out to participants. Laurie and Ernst in car 42 finished first, maintaining four points, losing none on the second day, while Hazel and Martin in car 43 came in second, also finishing with no points lost on day two. Car 5, driven by Anibal and Cindy Claudino, placed third, losing only 10 points. Prizes were awarded to cars 42; 20 (Dean and Jackie Lines); 4 (Brent and Carolyn Buchwald); 40 (Brian and Wendy Vandusen); 21 (Michael and Lisa MacDonald); 31 (Tim Sanderson and Delani Davis); 28 (Arthur and Charlene Quinlan); 23 (Shaun and Rosemary McKaigue); 13 (Mario and Debbie Goyette); 33 (Stan and Isabel Schnapp); 39 (Clive and Eunice Van Wert); and 18 (Cris and Urszula Holden).

Lots of thanks to the volunteers; John Ruffo, Gord Bric, Sabir, Sadia, Halah, Hiba, Mustafa, Daryl Beaumont and my wife, Gulzar. I appreciate my friend Dave Sly taking photographs, and thanks again to Sheila and Walter Murray for their hospitality.

We look forward to next year’s event.