Home »Provinz»Targa Muskoka 2012, An Event To Be Remembered 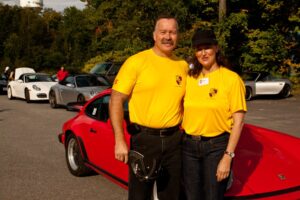 So, after months of organizing and learning to write articles for Provinz about Targa—thank you Kye and Emily for correcting my Scottish Brogue—the date was upon us. We were oversold at 42 cars but Sajjad Butt and I believed we had come up with great routes and a fun venue for participants to enjoy. As Muskoka is home for me and I arrange a Charity Motorcycle Ride for Diabetes each year, I knew all the roads in my sleep.

So Friday Sept 7th rolled around and there was one final thing to do. Mark out parking spots in numerical order for 42 cars at the Bala Bay Inn. Mike Edmonds who does such a great job on our Club Race had been kind enough to give us laminated numbers to mark out the spots. After a bit of work, there was the parking grid neatly laid out. Then the rains came and very high winds appeared and Mike’s numbers started to fly all over Muskoka. Sorry Mike we are now missing a few. So we retreated to the covered Hotel entrance to greet our guests. 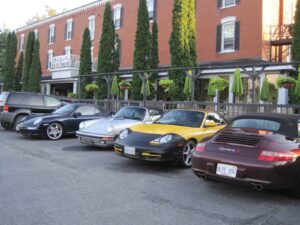 Photo by Halah and Hiba Butt

Standing on the steps a local lady engaged us in conversation: “He is here, our séance will be great.” “Who is here,” I asked? “Mr. Sutton of course, you know he died here–murdered they say, and his ghost still walks the hallways.” “No way!” I retorted. “Yes, look I will show you.” She turned on her camera. “Look,” she said. “See that white spot in the top left, that’s him, and as the night goes on, it will get larger.” To my rescue, another Targa participant arrived and I ran out into the rain. Man that was spooky. I wonder who got Mr. Sutton’s haunted room on Saturday night.

Soon the parking lot was covered in a sea of Porsches and water, but everyone took it in stride. It was time for the bus to arrive for people to take the 30-minute trip from Bala to Bracebridge to David and Anne Forbes’s social. As the big, yellow school bus pulled in someone remarked, “A school bus?” “Yes,” I replied, “All the budget could afford.” “Awesome!” remarked someone else. “I have never been on a school bus.”

David and Anne, who oversee the Club’s Fun Runs and specifically arrange our Muskoka fun runs, did an awesome job. We were 80 strong and the wine flowed. Not to worry as they were all going back on the school bus. 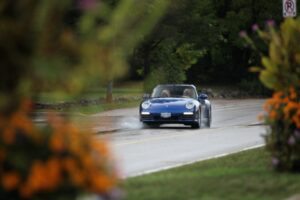 Saturday morning arrived and coffee was in great demand for some. Our Rally Master held the Drivers’ meeting and people were getting excited to go. The 10 am start was upon us and Sajjad passed out the route guide. You are given distances where you need to turn. To make sure one’s odometer was calibrated to our route planning car, there is a marker at 10km so Navigators could start to allow for the natural odometer variances. There is also an average speed designed to respect speed limits. So the objective is to arrive at a designated checkpoint within a prescribed time. Arrive early, you lose two points. Arrive late, you lose one point.

Participants needed to calculate the third variable, time, as they had speed and distances. You could hear minds whirring and calculators humming as Navigators scratched their heads. “What did they say the formula was?” The first turn was: At 00kms turn left. Easy, as this was on the way out of the Bala Bay Inn. The second instruction was: At 00kms turn right. The answer to this dilemma was take an immediate right after you leave. Odometers only record in 0.1 of a km and the right turn was 100 meters down the road. What perverted mind came up with that. We take the fifth. 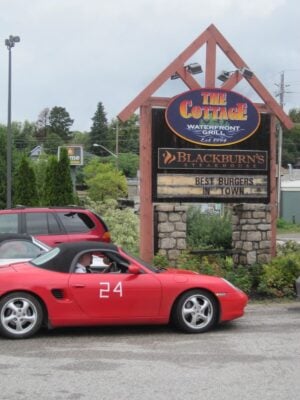 Photo by Halah and Hiba Butt

The route was over some of the most up and down, twisty, beautiful roads in Canada. Sajjad had commented, “These are great rally roads”. Lunch was at the Cottage Waterfront Bar and Grill in Huntsville, and the owner Bruce Kells and his team did a great job in serving a lovely lunch and quickly. Time to get back on the road and we re-emphasized that my telephone number was on the instructions. No one had called in the morning but in no time, it started ringing and did not stop all day. As I know the roads so well, I could quickly determine where the car was.

My first challenge and I will leave out the names of the callers, was “I see the Deerhurst Inn but seem to be lost.” A quick correction and off they went. Five minutes later they were back still navigating around Deerhurst. Further instruction and of they went again. A few minutes later, they are back. When asked where they were you, they replied: “North Portage Road.” “Not to worry,” I said. “You’re going the wrong way, but it will take you back to the Rally Route.” Then all of a sudden a big whoop: “I see other Porsches.” Off they merrily went.

Ten minutes later another crackly call. “We are lost, going up Hwy 141.” “Good,” I said, “If you keep going you will be in North Bay. Turn around and retrace your steps to Hwy 11 south.” Another satisfied customer. And then, a dreaded call, “We have hit a pothole and blown a tire.” It was Doug and Jean Stark and I will let Doug tell you his story. 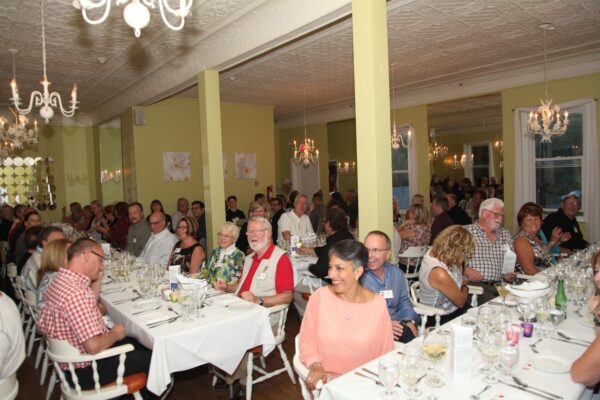 What Doug’s story underscores is, “It is not about the cars, it is about the people. And it is rewarding to help others.” 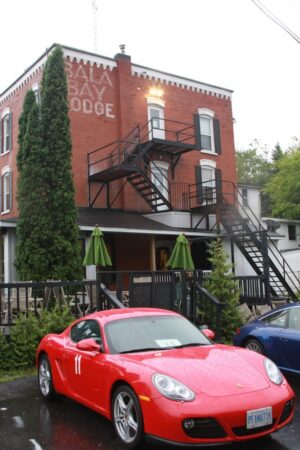 As everyone rolled in at the end of the day, big smiles and everyone recounting their day’s adventures. Time for our wine flight dinner sponsored by Henry of Pelham. Paul Speck, coowner of the winery and a Club member had generously sponsored with some of his Reserve wines. They were awesome. Thank you Paul. The Bala Bay Inn put on a great meal, with Kim Ward, the owner, merrily serving guests. Time to retire, an exciting and fun day and more to come tomorrow. One last thing to do is to make sure our guests staying with us were all tucked in. There was John and Rosemary Adam and the Butt clan. By this time the Butt family had grown to 11 but space was found for all.

Sunday morning was beautiful and sunny in contrast to rain on Saturday. Despite the Saturday weather, everyone had driven very well with no incidents of any consequence. We described the Sunday run as firstly a relaxed very scenic run, back on to the twisty up and down roads a pleasant drive through Bracebridge and back on to a beautiful rollercoaster road to finish. Participants were really engaged and no longer were they saying “I will finish last”. They were having fun, and wanted to improve their scoring position.

The morning session ran without incident and as the cars arrived at the Muskoka Boat and Heritage Centre at the beautiful Wharf in Gravenhurst, there were lots of smiles, regardless of where people felt they finished. So what did people think?

Our survey after the event indicated that while we can work on timing mechanisms and instruction, 91 percent indicated they would recommend to others and 93 percent would like another rally. As one of the principal objective of your Club is to “facilitate goodwill and fellowship among its members and engaging in events agreeable to the membership,” Targa Muskoka truly was an event to be remembered.

Thank you to all who participated and all of the individuals, particularly the Butt family, who spent countless hours putting Targa Muskoka together, and my good friend John Adam who handled registration and the wine selection.