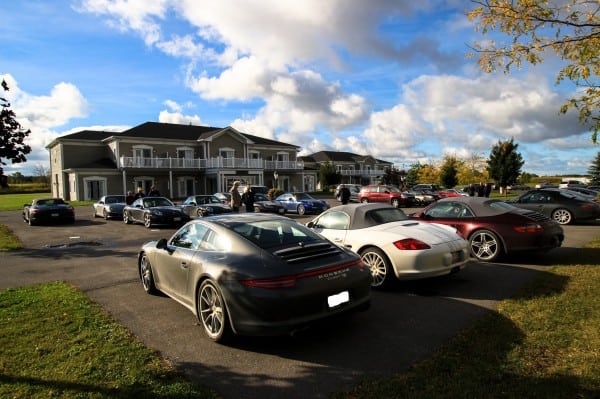 We kicked off with a welcome reception Friday evening in a room that dated back to the late 1800’s when the main building of the Waring House was constructed. A thirsty crowd soon had the wine and conversation flowing after all Porsches were parked for the evening.

The facility also has two main buildings constructed a few  years ago with elegant rooms. The fireplace was a nice touch, as the weather turned cool. Saturday morning started with a drivers’ meeting; participants were keen to get route instructions. They had to be patient as the instructions were only handed out on departure, at 10am.

The starter was UCR President, Walter Murray, who enviously gave up his 911 Turbo to his wife, Sheila, to participate in the Targa. (Walter and I were precluded from joining the Targa as we had developed the route.) 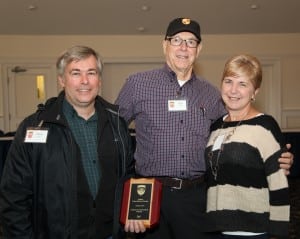 Twenty-one cars lined up, awaiting the start. As they took off, navigators had to quickly determine which exit to take from the roundabout outside the hotel entrance. All departed smoothly and I headed out to the course checkpoint while Walter went into Picton for a newspaper and coffee: presidential privilege!

However, coffee had to wait as he got an emergency call: “There is a roadblock at the early part of the route. What are we going to do? There are tons of Porsches here.” So Walter headed out to investigate but on reaching the roadblock, nary a car was to be seen. Ah well, Porsche owners left to their own devices are a smart lot. There is no truth to the rumour I engineered the detour to make the course more interesting! 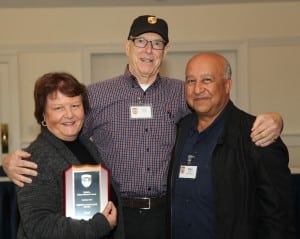 The rest of the morning and afternoon went smoothly and at the end of the day everyone headed to the Pub for a well-earned libation. However, my problems were only just beginning as the “scoring” program developed a glitch—I was in over my head. Jennifer Glover, an IT expert, answered my cry for help. Jennifer was Sheila Harwood’s (Walter’s wife) navigator. Thank you, Jennifer, for bailing me out. Then it was on to a sumptuous dinner where the conversation was engaging and the meal lovely.

Sunday morning came early. And everyone was keen to go. But hold it, we had not counted on a 1,500 person marathon. In a moment of panic I thought I needed to change part of the route, but no, Porsche owners are resourceful, hopefully and would deal with what was thrown at them.

Fortunately all worked out without a problem and back at the Waring House we enjoyed a lovely brunch as scores were tabulated. It was a close event, with two teams tied for second, but after a toss, best of three, the winners were:

So 21 Porsches, great roads, interesting courses, fantastic accommodation and meals, of course, time spent with friends and getting to know other Porsche owners—that sums up the UCR Targa in Prince Edward County.

While weather conditions were somewhat variable over the three-course event, it did not stop participants enjoying 350 km of driving around the County. The Targa spanned the whole County, which juts out into Lake Ontario between Trenton and Napanee. Due to the shape of the County and the fact it is surrounded by water, the courses were interesting, including short stints on the same road in the same direction or reverse. Some of the course routes also overlapped. A detour and the questionable placement of the check point in the first course added to the mystery of the event.

Our participants said it all: “What a great event: beautiful countryside, fantastic people, great food, good times”; “we can hardly wait to do another Targa”, “a great event for first timers”; “great event, great people, great cars, lousy weather”. Just some of the comments from participants whose average rating for the Targa was 9.6 out of 10 on the event questionnaire.

My thanks go out to all those who helped me bring Targa Prince Edward County together: Walter Murray for all his Targa Muskoka experience and helping hand; Clive Van Wert for holding the fort in September when I was touring Europe; my wife, Beth, for her patience, counsel and help whenever needed; John Adam for collecting revenues, preparing badges and advising me on Club processes; Sencer Erkaya for delivering the trophies; Leo Kazlovskis for delivering the badges and Jennifer for the score sheet work. Thank you all!! A Targa is a group effort, I could not have done it without your help. 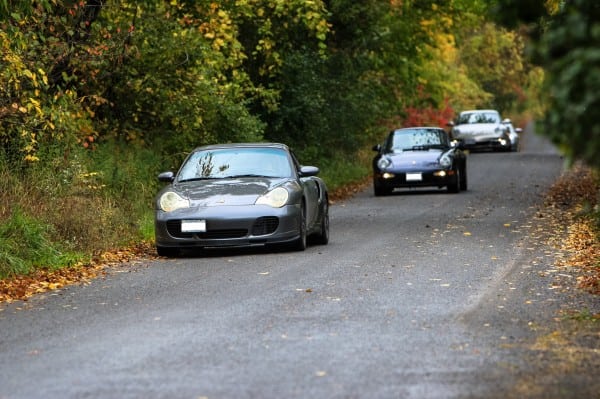 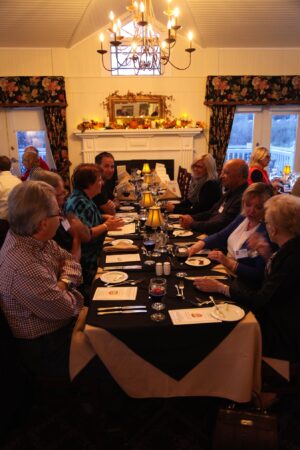 Thank you to all the participants for making it a stellar event and thanks to Prince Edward County. Now, on to next year’s Targa, which will be in the Niagara Peninsula or as well, possibly another Prince Edward County Targa, in the Spring, provided a Targa Master for the event signs-up. Two Targas, twice the opportunity for Club members to enjoy a Targa or twice as much fun for members who can enter both.