Somewhere in Central Muskoka: “I have to pee.” My spouse, Jean, must be affected by the rain.

“Lots of trees to choose from, Dear,” I reply. Not a good time for that type of response, I was informed.

It all started out ok, if you don’t mind rain and moderately slippery roads. Not only is the route devilishly laid out, but my odometer is out 0.4km every 10km, so we have to adjust our distances to the next turns on the fly. We had made a wrong turn. (I am reminded that I failed to listen to the navigator…) and had to double back and we’re now catching up trying to make up lost time. 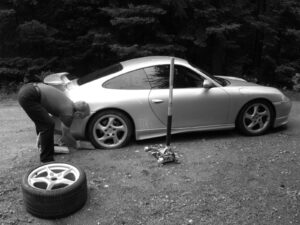 I almost missed it. A one-foot diameter hole in the road that had I just simply driven over might not have been a problem – but I just had to try to miss it… BANG! ‘What was that’, asked Jean? “Tire…” I replied, as I slowed and pulled off the road into a driveway.

Oh wait…The spare tire is sitting in my garage. I removed it for a track day. Ok then… (scratching head)

Pull out phone. Dead battery. No problem—I’ll use my phone charger. Nope, battery fried—won’t charge. Great… (sigh) Thankfully Jean’s phone works and we get a good signal. Calling CAA, we’re told a one hour wait. FINE. (Annoyed.) Pouring rain now. We hear fellow Targa runners going past behind us. We’re not concerned so we don’t get out and flag them down. One hour and forty minutes later, after calling CAA back—another one hour delay… Now we’re steamed—and not just the inside of the windshield. Half an hour later a text from CAA informs us the driver was diverted to St. Catharines from Bracebridge. What the…?! Plan C. My spouse calls Walter Murray and tells him about our situation and the fact that CAA seems to have just one truck and driver in the area and that one is off to the south.

Should have been our FIRST call, as Walter drives his truck and trailer to our location (somewhere near the Shire?) and brings along a set of rear tires on rims that fit a Carrera, along with his race jack! It took us just 10 minutes to change the rears and just as I lowered the car…who shows up? An independent tow truck who was finally contacted by CAA three hours after our first call! Fail.

Off we went back to the hotel, very late (four hours) slightly damp, but thanks to the wonderful support of Walter we were back in time for dinner and able to continue the event the next day as well as drive home to Mississauga. Of course, being many hours late we missed the meeting for the next day’s run info and lo and behold I show up in a yellow Porsche tee-shirt the next morning… just like the Targa leaders. Whoops, who knew? Felt like Rosie Ruiz. (Google her.)

In a mighty show of teamwork and coordination, Walter brings my tires down from Bracebridge the very next day to John Adam who then drops them off at Tirecraft in Mississauga. Tuesday morning, phone rings: “Hi, I’m Chris from Tirecraft, I have your rim and tire here.” Wow! I ordered a new tire (rim was fine, tire was toast) on the phone, and the next day I had my tires back on my car; Walter’s loaners were picked up by John and they were already on their way back up with Walter that night to Bracebridge! Thanks to Walter Murray and John Adam, a happy ending.

Is that club support or what?! Porsche people really ARE like family

During Targa Muskoka, Doug Stark hits a pothole and flattens a rear tire. Walter Murray comes to the rescue by loaning two wheels to Stark, putting Stark back in Targa rally action.

On Monday afternoon, Murray delivers Stark’s two rear wheels to John Adam in Mississauga. At 4:30pm, Adam takes the bad wheel to Megawheelz for inspection and repair. Rim ok, but tire is scrap.

Stark is called and authorizes a new tire for installation upon arrival Tuesday morning. At 5:30pm, Adam delivers the second (good) wheel to Megawheelz (second run to the shop within an hour).

Tuesday morning, about 10am, Stark arrives to have the loaner wheels removed and his own wheels, with new tire installed.

At 4:00pm Murray shows up to pick up his wheels and have a cup of tea.