If you are a real fan of boxing, you most likely are aware of The Fight of the Century that was held on March 8, 1971 at Madison Square Garden in New York City, between what many believe to be two of the best boxers ever, Joe Fraser and Muhammed Ali.

Tickets were so hard to come by that even Frank Sinatra could not get one. Yet he apparently got in with the media by claiming to take pictures for Time Magazine. There are even pictures showing Sinatra holding a camera that evening, so it must be legit!

Fraser and Ali went the full fifteen rounds that night, with Fraser putting Ali down twice, and Ali quickly returning to his feet each time. Yet, Fraser ultimately won the match by leading in all three scorecards.

Through the eyes of this young boy it was a fascinating event as the relentless pounding, jab-cross-hook-cross, leftright- left-right, punches went back and forth for an hour, and for every punch delivered there seemed to be an equally responsive powerful response from the opponent. At times, punches were like explosions.

Not until I was recently thinking about 911 engines did I make the connection to that boxing match. So why do we call the engines in 911, Boxster (hint, hint) and Cayman sports cars, boxer engines, also known as flat or horizontally opposed? One just has to reflect on a match like the Fraser – Ali fight to seek the answer.

Boxer engines have all of their cylinders configured in a flat plane, with the pistons “punching” back and forth like the fists of boxers. Every thrust of a piston is matched with the opposite thrust from the piston located 180 degrees away on the other side of the crank.

Benefits of boxer engines include having a low centre of gravity since the pistons and surrounding cylinder cases are lying relatively low inside the engine bay almost in line with the drive shafts, and the engines are generally better balanced with shorter crankshaft lengths when compared to inline or V shaped engines. 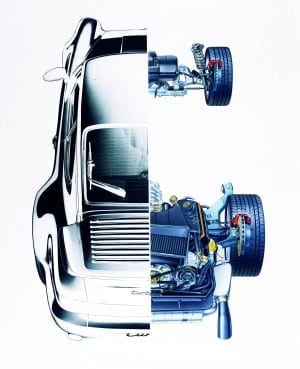 Note the cutaway diagram included in this article showing the left bank of three, and the right bank of two of the three, opposed cylinders in a recent six cylinder 3.2L Boxster engine.

As well the cylinders were traditionally easier to separately air cool (bingo, pre-water cooled Porsche lovers) than engines which have their middle cylinders buried inside the crank/cylinder engine case like those of inline and V configurations. Of course today Porsche water cools these engines (as shown in the picture), but the ease of air cooling them in the past is a major reason why they initially gained such popularity.

In terms of limitations, boxer engines are typically wider than inline or V shaped engines and are more expensive to manufacture since there are at least two cylinder cases and added components for overhead cam configurations, when compared to inline engines. At least two cams and associated valve train components are needed in boxer engines, one for each cylinder bank, versus just one for inline engines.

In rear-engined layouts, like 911s, the car body needs to be rather wide to cover the boxer engine as well as the suspension, exhaust, wheels and tires. To highlight this see the enclosed picture of a 1993 Porsche 911 Turbo showing on the left side the body and on the right side the underlying engine and components.

When a boxer engine is located at the rear, it is clear the body of the car needs to be wide. In fact, I am sort of embarrassed to admit, that the nice rear end on a Cabrio I followed up a hill in the Presidio area of San Francisco a number of years ago was the tipping point in my reasoning for buying my next 911. For some of us guys it just does not take much!

In mid-engined cars, say like a Cayman, the need for extra width is perhaps not as evident since the designers have massaged the bodies to hide this mid-width. But, if you look back at a Ferrari Testarossa from the 1980s, for example, with a flat 12 boxer engine, those cars were visibly wide.

Boxer engines located in the front are now rather rare, except for one manufacturer, Subaru, who has really developed their engines to the point they now “own” this configuration. Subarus are the only contemporary vehicle manufacturer offering a complete line of cars with front mounted boxer engines, often coupled with all wheel drive systems.

Typically boxer engines located in the front engine bay (due to their width) leave little room for steering components, but Subaru has designed their engines and drivetrains to make this layout feasible. In fact, it is a key feature in their marketing and they highlight this layout to differentiate themselves. 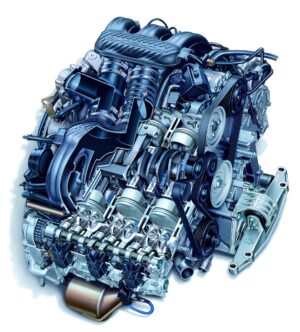 Porsche is rumored to be working on a new boxer 4-cylinder engine expected to be launched in a vehicle occupying a price point below the Boxster. It is expected this engine will also be available turbocharged and appear in variants of the Boxster, Cayman and perhaps even the 911.

Remember the 912? It had a flat 4-cylinder engine, and was launched in 1965. Could we be headed for a better version of the ‘60s all over again?

Porsche is also rumored to be working a new boxer 8-cylinder engine to appear in their next supercar slotted to replace the 918. It is nice to know the limitations of engine design are nowhere near the end, and that boxer engines should be around for a long time to come. Porsche, let’s not let Subaru have this space entirely to themselves!

The next time you floor your Porsche sports car, think about Fraser and Ali going at it, toe-to-toe, for on hour, over fifteen rounds. We certainly want our Porsches to always go the distance too!

As always, submit your ideas for future tech articles to me at
George@ONeillAdvisors.ca or, even better, consider writing
your own article for us to publish. Your feedback is always
welcome

Previous articleTHE WAY WE WERE…
Next articleMuskoka Spring Fun Run