Sitting on my deck awhile back with my older brother and a couple of his friends, talk did not stray very far–as is often the case with this crew –from automotive subjects. Topics of special interest that evening included “over-square” and “under-square” engine designs and features of each. Opinions were flying around freely, faster than the beer cans being opened, and not all fact based. When I get together with my brother and his friends, they are not afraid to share their views, whether well informed or less-so, about anything related to cars, trucks, motorcycles, airplanes, boats, lawnmowers, chainsaws or for that matter any machine powered, or they believe should be, by an internal combustion engine. At times I get the impression they sometimes try to turn their misunderstandings into a set of new facts. But to be fair, it is easy to misunderstand “over-square” and “under-square” engine configurations. So, let’s review some facts. 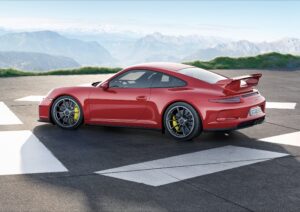 Looking at the specifications for a 2014 GT3, a car I admit I have daydreamed about, the engine block has a bore of 102.0 mm and stroke of 77.5 mm. Bore, as you may already know and as the name implies, measures the diameter of a hole. So, engine bore measures the diameter of the cylindrical holes (“cylinders”) in which engine pistons slide up and down a certain precise distance. This distance is the stroke, again as the name implies. Because the engine bore in this GT3 is larger numerically than its stroke. This engine is therefore considered “over-square”.
Imagine if you sat on an empty square cardboard moving box, and the sides remained vertical and in tact yet the box expanded outward an even width on each side (impossible to physically do with cardboard, but please work with me as this is for illustrative purposes), you would be left with a shorter but wider box – i.e. it became “over square” or fatter. Contrast this with the situation when the engine bore is less than the stroke (as in current Porsche diesel and hybrid engines), the engine would be considered “under-square”. Image being able to take the same initially square moving box, gluing the bottom to the floor so it does not move and then pulling up on each side, evenly stretching the sides to be longer than the width. This would result in the box becoming “under square” or thinner. For completeness, a third possibility occurs when the bore equals the stroke, and you guessed it, this configuration is called “square”. Subaru’s current BRZ sports car is an example since it has a flat-4 (yes, a boxer!) engine that just happens to have both an 86 mm bore and stroke. 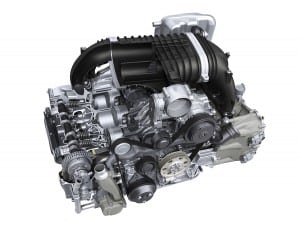 It is important to know that bore and stroke will be constant from cylinder to cylinder within the same engine, so each engine just has one bore measurement and one stroke measurement. Although bore does not necessarily have to equal stroke, and they usually are not equal, there are cases where they are indeed equal, as we have seen with the Subaru BRZ. Bore and stroke dimensions should also remain constant over the proper operating life of the engine. If bore increases slightly because of perhaps lack of proper engine lubrication (not enough oil in the crankcase, oil not changed frequently, oil pump not working properly, etc.), the pistons would tend to flex slightly during their travel over the stroke distance and may lead to the engine “burning oil” or to an outright mechanical failure.

Pushing a little deeper for more facts, “over-square” engines are sometimes also referred to as “short stroke” engines, because as we now know their stroke is a smaller number than their bore. Most Porsches today are of such a design since a shorter stroke engine has less forces exerted internally on the moving components (because the pistons and connecting rods are moving a shorter distance) and therefore the engine can spin up to higher revolutions per minute (RPM), the number of times the crankshaft rotates one complete revolution during each minute. In the GT3 the maximum engine speed, or redline, is 9,000 RPM, a number just a few years ago achieved only by formula racing cars and motorcycles. Attempting to keep internal engine forces low (since high forces rob power and cause durability problems) is one of the major reasons many engineers today prefer small displacement engines, and why Porsche will soon have four cylinder engines available in certain models.

“Under-square” engines are therefore also referred to as “long stroke” engines, since their stroke is a higher numerical number than their bore. In these engines forces are generally higher since the pistons and connecting rods are moving longer distances.

Hopefully you are not more confused now than at the start. But don’t worry, even the most well meaning automotive enthusiasts sometimes get these things mixed up.

As always, submit your ideas for future tech articles to me at George@ONeillAdvisors.ca and even better consider writing your own article for us to publish. Your feedback is always welcome.

Previous article944 CORNER – Back at it
Next article36-Hour Air, Water, Fire & Earth Tour

The Baby Has Arrived! Porsche Macan: The Little Tiger