Tech Editor’s Note: We are always looking for ideas and PCA/UCR Member submissions for Porsche tech related articles, so submit yours via email to: George@ONeillAdvisors.ca today! 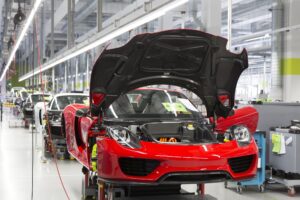 Porsche’s 918 is a tour de force that stands alone. Amongst its many innovations, the 918 is the world’s first plug-in hybrid supercar, and it is truly Porsche’s flagship.

It is the first production vehicle to break seven minutes on the Nürburgring 20.6 km course com-pleting the circuit in 6:57, definitively beating the previous record by a full 14 seconds. The entire production run of 918 units has been sold out, all being 2014 model year vehicles and each will certainly become collectable.

Well, except perhaps for one car that spectacularly went up in flames last fall in Caledon, Ontario, while the owner Michael Wekerle (a newcomer on CBC’s hit TV show Dragon’s Den) was filling the fuel tank. Wekerle has joked that Porsche may now need to rename the model the 917.

But as unique as the car is, the manufacturing and assembly methods to produce it are just as unique. The cars are assembled in a purpose-built area inside Porsche’s Stuttgart-Zuffenhausen assembly complex. Porsche has designed the production process to be not only ergonomic for the workers, but also to achieve the best assembly quality currently possible. Porsche has gone as far as filing several patent applications for production related innovations.

The following paragraphs were included in a recent Porsche press release describing the areas within the plant containing innovations that are perhaps the most novel.

As you read through these, cross-reference the accompanying picture showing the layout of the plant to see how the various elements work together.

The battery-powered elevating truck has been designed especially for this vehicle. The truck carries the two-seater monocoque, which is the starting point of assembling the Porsche 918. The elevating truck allows the monocoque shell to be rotated, tilted, lifted and lowered, meaning the interior of the vehicle as well as the 12-volt battery and the high-voltage wiring can be positioned with great ease. The ability to position components with ease is, in fact, the key to preventing damage when fitting the components.

During the “engagement” process, the electric motor and transmission module is connected in a de-energized state to the engine with the help of a specially developed trolley. Together, these components form the vehicle’s drive unit. At this point, the specially designed scissor lift platforms are used to position the unit carrier above the drive unit so that both elements can be screwed together at three different points. The next stage of the process is called the “marriage”. The marriage involves the unit carrier and the drive unit being connected to the monocoque via six bolts.

Thanks to the new wheel alignment platform, all the essential parameters can now be measured within a very small space. These parameters include properties such as the cross load, track and camber, and each one can be configured to the optimum setting for the vehicle.

The leather finishing and assembly tables used at the 918 plant set the benchmark when it comes to ergonomics and flexibility. For example, interchangeable inserts allow different components to be manufactured, ensuring that station times are fully optimized. Furthermore, the height of the tables can be adjusted along with the angle so the table corresponds to the needs of the individual employee.

The Bluetooth-controlled cordless screwdrivers are being used for the first time at Porsche. These screwdrivers are virtually silent and require no wiring. These features give the technicians maximum flexibility, and the risk of damage to components is greatly reduced. What’s more, coupling the screwdrivers with the database via a Bluetooth interface ensures that the torque values for all safety-specific screw connections are complied with and can be documented and checked at any time.

The electronic vehicle tracking card, known as the eWbk for short, may not be an innovation for the Porsche 918 alone, but it clearly shows how the Zuffenhausen site – home to the 911 production line for five decades – has been able to effectively combine small-scale and large-scale production. A standard feature of large-scale production for many years, the eWbk system used at the factory also contains a wealth of information that is essential to the production process, including drawings and test points to name just a couple. In addition, the card can be used to document potential problems – perhaps if the feedback from the Bluetooth-controlled cordless screwdriver indicates that a particular torque was not reached. 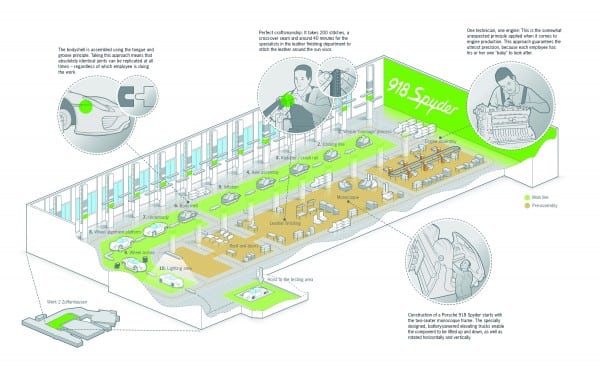 Porsche innovation occurs not only during the design of the vehicles themselves, but also in the processes that manufacture and assemble the vehicles. Worker ergonomics, plant efficiency and production accuracy all go hand-in-hand to create the fine vehicles we get to enjoy. The best vehicles can only be achieved when design and production are both optimized for excellence.

My Pathway to Porsche

How to Build a Porsche Collection