For the past three years, I have made the trip to Easton, Pennsylvania for Tech Tactics East. This annual event, which has been running for over 30 years, is held over a weekend in late February or early March. The same sessions run both Saturday and Sunday to allow PCA members to select the day to attend that best fits their schedule. This year about 120 people attended each day, and again the event was held at Porsche’s Northeast Regional Support Centre. If you are not familiar with these events, read the following four short paragraphs from the organizers:

Tech Tactics is a day dedicated to Porsche technical information. This event is for the casual information gatherer to the every day Porsche mechanic. Get the latest information directly from the source, from how to balance Weber carburetors for your 1970 Porsche 911S, to understanding how your Cayenne Diesel works.

The event was born in 1980 in the heart of Zone One at the Harley Hotel north of Hartford, CT. It quickly outgrew this facility and moved to the Springfield Sheraton where it resided for over twenty years. By the 1990s it was the premier technical weekend for PCA with some renowned speakers; such as, Norbert Singer, Phil Hill, Derek Bell, and Brian Redman.

By 2007 attendance was dwindling and new venue was in order. The event was moved to the Farnbacher-Loles facility in Danbury, CT. This move regenerated interest in the event with over 250 attendees. With the demise of the F-L facility, we have moved again and have changed the direction slightly in terms of the format. 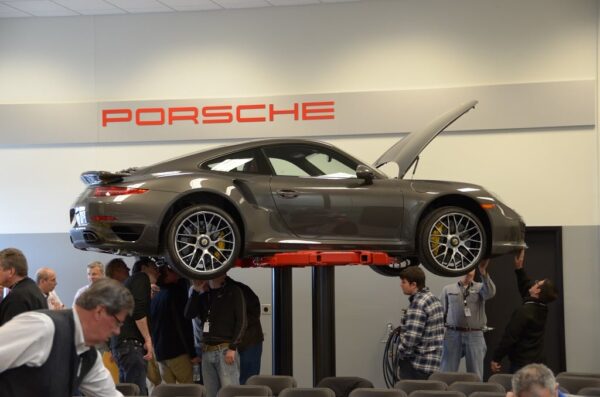 Tech Tactics 2014 will be hosted at the PCNA Training facility in Easton, PA. This facility is perfect for a “hands-on“ type of event. This facility is used to train Porsche technicians on the intricacies of the new Porsches. It is equipped with state of the art classrooms with lifts and drive train assemblies which will be available for our event.

Tech Tactics is a great mix of “what’s new”, delivered directly by Porsche AG representatives, as well as topics from various industry and PCA member experts related to how to properly maintain and even improve our older cars. Following is a short summary of the seven sessions I attended at this year’s event.

The first session was titled “Newton Surprise” and was led by PCA member Jim Newton. Jim runs a well-respected Porsche repair, race and restoration shop, so he knows a lot about Porsches. He spoke about how to store a car properly among other related points, and mentioned a product called the CarJacket, which totally encases the car inside a cover, zipping around the bottom to completely seal the car inside. Google it to learn more.

The second session was titled “Panamera S E-Hybrid”, and was led by Porsche Technical Trainer Rolf Kitlitz. This vehicle is a first for Porsche since it is a plug-in hybrid, similar to the new 918, so watch closely as the future unfolds; I believe we will see many more new vehicles plugging in to either get their only source of power (like the Tesla Model S) or complementary power like the Panamera E-Hybrid. 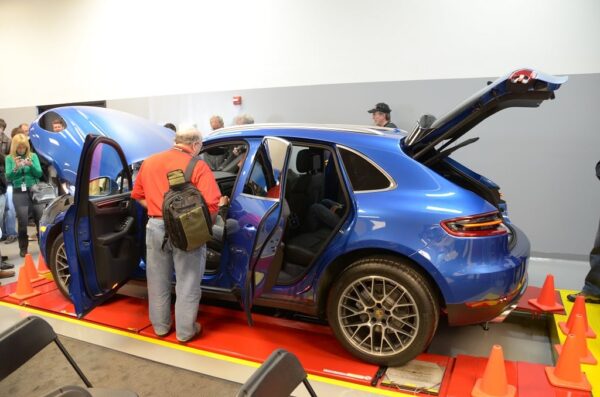 I will write a future article on the technology behind this car.

The third session was led by Daniel Vasiliadis, SUV Marketing & Sales Manager from Porsche AG and he spoke about the Macan, with the “S” model silently waiting for us under a car cover. I am sure not as exciting as the initial public unveiling in Los Angeles last fall, nonetheless keeping the vehicle covered did add a bit of anticipation, since very few in the room had yet seen the Macan up close. See previous issues of Provinz where we have discussed this car, and once available later this year watch for a report on how it drives.

Next up was the fourth session led by Hayes Owen from Porsche Motorsports, who discussed the 991 GT America factory race car support program. If you can budget in the order of $1.5 million annually to race, which is actually “economical” for this level—if you can dare say such a thing—you may want to contact Porsche to explore this further. The GT America is based on the 991 GT3 Cup Car. 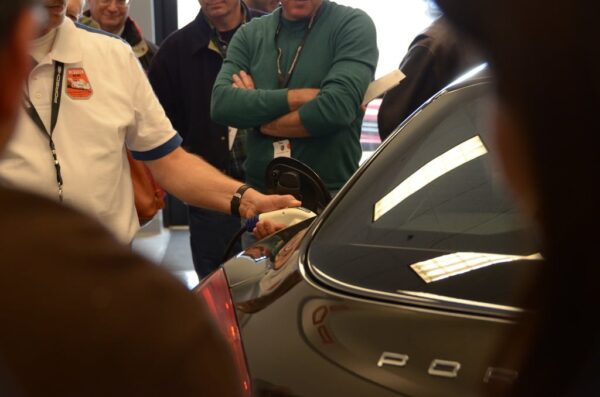 The fifth session was led by Dave Becker, another Porsche Technical Trainer and he spoke about the new 2014 991 Turbo and GT3. An overview of the drivetrains and suspensions of each vehicle was discussed, as well as some of the key unique technologies such as the active pneumatic front spoiler on the Turbo. The elephant in the room was the concern with 2014 GT3 engines that caused Porsche globally to stop selling new GT3s and requesting current owners to stop driving their cars. This was addressed straightforwardly by acknowledging that two cars in Europe have caught fire, it seems because hot oil seeped onto exhaust components. But that is to be confirmed, as Porsche is taking the problem very seriously, flying teams of specially trained technicians from the factory around the world investigating certain cars to determine what precisely may be the source of the problem. [Editor’s note: Porsche has now recalled all 2014 GT3s for engine replacement.] In a future column we will discuss more about the 2014 Turbo and GT3.

The sixth session, led by Lou Verdiales, a member of the PCA Tech Committee, was all about 911 Turbo Maintenance and Modifications. He spoke about the various generations of 911 Turbos, providing excellent information that anyone who owns one of these cars would like to know. Watch for some of his key points in a future article.

The last session was conducted by John Paterek, another member of the PCA Tech Committee, titled “Searching for the Perfect Porsche”. John is somewhat of a legend within the PCA since he has attended most, if not all Tech Tactics sessions, and since he runs a Porsche restoration shop he is very knowledgeable about older Porsches. He reviewed, with pictures, some of the more notable cars that have been worked on recently in his shop, sharing tips and advice on anything particular to those cars. If you ever have a chance to hear John speak about older Porsches, don’t miss it. There may be no-one in the world more knowledgeable.

Finally, before flying back to Toronto, I stopped by the Martin Guitar Factory, located just a few miles from Easton in Nazareth, PA. If you are an acoustic guitar player, you have heard about this company. Much as Porsche is a leader in sports cars with a rich history, Martin is also iconic in their industry and has been in business over 180 years. The factory tour starts at 11am weekdays and access to the company museum runs throughout the day. And as fate would have it, there is a tie between Porsche and Martin. In the factory parking lot there was a silver Porsche Cayenne with a big Martin logo on the door, I presume driven by the Chairman and CEO Chris Martin IV. Chris is a Porsche fan, as shown in the 2013 Martin Guitar product catalogue with him standing beside his 911 Cabriolet, and by a small wooden model I found displayed in the museum of Chris shown driving a Boxster.

If you can, check out Tech Tactics next year. And if you like guitars, make time to visit Martin as well. For sports car driving guitarists like me, to paraphrase a famous saying from the past: Tech Tactics and Martin, there are no substitutes.

As always, submit your ideas for future tech articles to me at George@ONeillAdvisors.ca and—even better—consider writing your own article for us to publish. Your feedback is always welcome.