The stoichiometric point is a term commonly used to describe the ideal fuel/air ratio in a combustion engine. The stoichiometric air-fuel ratio for gasoline is 14.7 to 1 by weight. Theoretically, at this ratio all of the fuel will be burned using all of the oxygen in the air. Unfortunately, our gasoline engines don’t run at this point all of the time. When we drive, the fuel/air mixture varies from the ideal quite a bit. Sometimes the mixture can be rich (air-to-fuel ratio lower than 14.7) and sometimes it can be lean (air-to-fuel ratio higher than 14.7).

So, how can we tell when the engine is at its ideal stoichiometric point, and better yet, how can we try to keep it there?

In 1976 Bosch introduced what would eventually become one of the most important technologies for reducing exhaust emissions: the Oxygen Sensor. Twenty years later (1996) Bosch had produced over 100 million of them.

As you can see, the reduction in emissions is to the order of 95 percent! Porsche has come a long way. 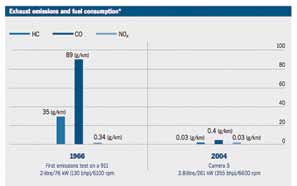 This drastic reduction in emissions was not obtained exclusively through the use of oxygen sensors, but also by the addition of the catalytic converters and an ever-developing engine management system geared towards less emissions while increasing performance.

What is a catalytic converter and how does it work?

In chemistry, a catalyst is a substance that causes or accelerates a chemical reaction without itself being affected.

Most cats (for short) consist of a ceramic structure coated with a metal catalyst, usually platinum, rhodium and/or palladium. The idea is to create a structure that exposes the maximum surface area of catalyst to the exhaust stream, while also minimizing the amount of catalyst required, since the materials are extremely expensive. Some of the newest converters have even started to use gold mixed with the more traditional catalysts. Gold is cheaper than the other materials and could increase oxidation which makes for a more efficient cat.

There are three types of catalytic converters: 2-way, 3-way and 3-way + air.

The first catalytic converter—the 2-way converter—was used on US cars between 1975 and 1980. These cats oxidized unburned hydrocarbons and carbon monoxide into water and carbon dioxide.

The three-way converter, in addition to performing the same as its predecessor, reduces nitrous oxides into nitrogen and oxygen.

The 3-way + air converter performs the same function as the 3-way converter, but also injects air between the two internal catalysts which improves the oxidation of the converter and thus reduces emissions even better.

Most modern cars, including Porsches, are equipped with 3-way catalytic converters. 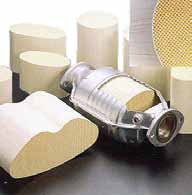 This refers to the three regulated emissions it helps to reduce.

The reduction catalyst is the first stage of the catalytic converter. It uses platinum and rhodium (precious and rare metals —hence the high cost of the cats) to help reduce the NOx (NO or NO2) emissions.

The oxidation catalyst is the second stage of the catalytic converter. It reduces the unburned hydrocarbons and carbon monoxide by burning (oxidizing) them over a platinum and palladium catalyst. This catalyst aids the reaction of the CO and hydrocarbons with the remaining oxygen in the exhaust gas. For example: 2CO + O2 => 2C O2

The third stage of conversion is a control system that monitors the exhaust stream, and uses this information to control the fuel injection system. An oxygen sensor is mounted upstream of the catalytic converter, meaning it is closer to the engine than the converter. This sensor tells the engine computer (ECU) how much oxygen (O2) is in the exhaust. The ECU can then increase or decrease the amount of oxygen in the exhaust by adjusting the air-tofuel ratio. This control scheme allows the ECU to make sure that the engine is running at close to the stoichiometric point, and also to make sure that there is enough oxygen in the exhaust to allow the oxidization catalyst to burn the unburned hydrocarbons and CO.

Porsche has pioneered the engine management systems and the development of the VarioCam and, subsequently, the VarioCam Plus has greatly aided in the targets of emission reductions, fuel efficiency and power. 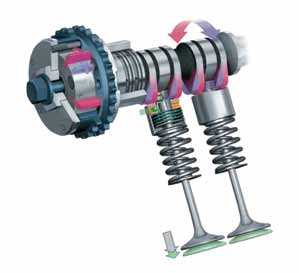 The VarioCam Plus is a system that combines variable valve timing with a 2-stage lift on the inlet side. Essentially VarioCam Plus creates two engines out of one, switching seamlessly between them in response to the driver’s inputs. The VarioCam Plus improves responsiveness when starting from cold by raising the amount of cam lift and retarding timing helping to minimize fuel consumption and emissions.

Porsche and other car manufacturers are constantly striving to perfect, not only the cats, but the complete engine management system to obtain greater reduction in emissions and better efficiency and thus power from their engines.

To learn more about emissions, catalytic converters and engine management systems and more, please visit my website at: www.PedrosGarage.com.

Tech Editor’s Note: This month I thought we should take a look at one of the most important, yet perhaps not that well understood, characteristics of internal combustion engines, the stoichiometric point. This magical point gives us the ideal combination of fuel and air to achieve maximum power along with an acceptable level of fuel efficiency. Read on to learn more.

As always, send an e-mail to me at:

George@ONeillAdvisors.ca if you have an idea for

a future article or you would like to contribute your

own, or you wish to provide feedback on this article.