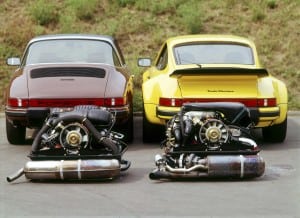 Standing outside of the Toronto Board of Trade building near Pearson Airport taking a break during a day-long meeting, one of the project managers who was working for me at the time walked over to my 996 Cabrio, stopped and bent over the rear of the car to slowly read aloud the word Carrera from the deck lid emblem. After pausing for a moment, I guess to absorb the meaning, he stood up, looked at me rather quizzically and asked: “A Porsche, why didn’t you buy a Turbo?”

Being a child of the sixties and growing up when the slogan “Porsche, there is no substitute” became infamous during the 70’s and 80’s showing 911 Turbos in action, I understood exactly where he was coming from.

If one is going to dream about a Porsche, why not make it a Turbo? I guess the difference was I was living my dream and he wanted to live the stereotypical dream.

I purchased my 996 a few years earlier, and had not since then reflected on why I purchased what some may consider a base level 911 instead of an S or a Turbo. Well at the time I of course had my own reasons, and to be frank, I was satisfied with the Carrera and did not need a faster car. 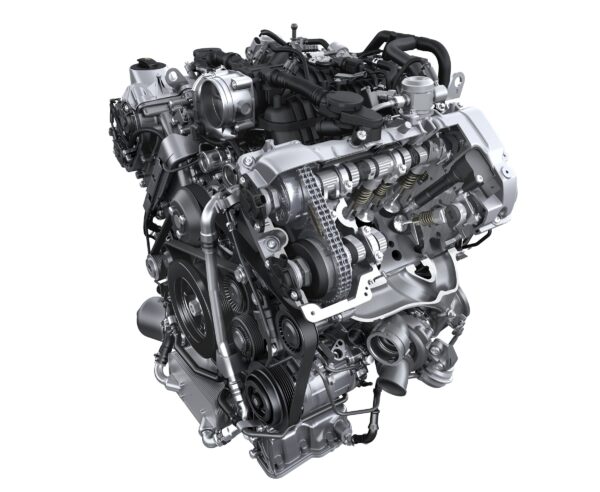 Excluding in some respects my 928S, my 996 was the fastest and most balanced sports car I ever owned. I really loved the feeling of having the engine in the rear “pushing” the car along, and the instant traction of the rear tires when accelerating. The only other car that had that feel, well perhaps it was more of a wish, was a 1970 VW Bug I owned for a period of time while in university.

Over the years Porsche has steadily improved the 911 Turbo, and now includes turbochargers in other vehicle models as well. One of the newest is the Macan twin-turbo V6 shown in an enclosed picture – 3.6L, 400HP, 406 lb.-ft. torque, just awesome for such a small compact engine.

Turbocharged vehicles are now so refined one may have a hard time detecting when the turbo(s) actually kicks in. In my daily driver Audi A5 (as you know a sister Porsche brand) the 2.0L turbo engine is so smooth I am almost always unaware when the turbo is awoken. 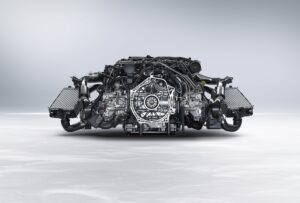 In the old 930s the turbo came to life almost as an explosion and one had to plan ahead and be ready, and Lord help the driver if he was about to enter a sharp corner while on a slippery surface. There are many 930s that went off the road backwards because of the instant power addition, the resulting loss of traction, all fighting the rear weight bias of the car.

I am walking over to my office book shelf to dust off one of my now infrequently-used mechanical engineering texts, Internal Combustion Engine Fundamentals by John Heywood (McGraw-Hill, Inc., New York, 1988). 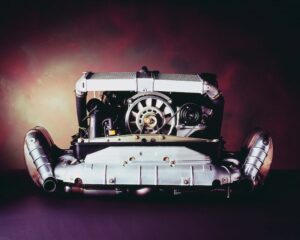 Getting back to turbos: Fresh air is introduced into the fuel mix allowing for a bigger explosion inside the cylinders, and when the air and fuel amounts are optimized they allow the engine to produce maximum power.

Remember the good old days of driving a car with a carburetor – go down memory lane with me now – like in the 1980 Corvette I once owned and fitted with a chrome Edelbrock carb, and going for a drive in a late fall evening when the air was dense and cool – oh yes you know the feeling!

The more fresh air you can squeeze into the engine, the better the engine sounds and performs, and the longer the burnout. Not that I would do that. Essentially all a turbo does is sit there and stuff fresh air down into each cylinder by spinning and spinning. But, how does it do this? I am glad you asked.

Looking at the enclosed cutaway photo of a variable vane geometry turbocharger, we see blue arrows (on the left) and red arrow on the right. The red arrows indicate hot exhaust is spinning the turbine shaft, which spins the attached (via a common shaft) second turbine that forces fresh air (blue arrows) into the engine.

It is rather simple really, yet wickedly effective. The exhaust gases are there and going out the tailpipe anyway. Using those gases to spin a turbine to speed up the fresh air intake is brilliant, like getting something for nothing. It is great, but as you may imagine there is a lot of complexity and related components needed, like waste-gate valves to bleed off excess pressure and smart computer programming, to get the smooth operation today’s consumers expect. Again, thank the mechanical engineers for sweating the details to make this all happen.

But hold on a minute, what is a variable vane geometry turbocharger? Well, it is a turbine that can change the amount of air being pushed into the engine based on engine speed. The thing about a turbocharger which gave it the original folklore was that it was either “off” when not spinning much, or “on” when spinning really fast.

This was the cause of many a 930 driver’s panic attacks— the turbo spooling up to full power at, let’s just say, perhaps not the best time. Today, with variable vane geometry turbochargers and computer control, the turbos come on in sync with the engine speed, still producing lots of power, but not necessarily of the explosive type until perhaps really high into the RPM band when the driver for sure has her foot into it and is ready for the fun.

Take a look at the enclosed pictures showing a contemporary 911 Turbo engine, back to a 993, then the 1976 non-turbocharged engine sitting beside a 930 engine. I think you will agree the current engine is much more complex looking than the others, for good reason. It performs smoother over the entire RPM range, while at the same time providing better fuel economy, more power, and let’s be honest, just a better overall experience for the driver. Even if I desperately want a 930, I know it will not perform as well as a current 911 Turbo.

So why did I not buy a Turbo as my colleague inquired? Well, the truth is I probably would have at the time if I had the budget. Maybe now is the time to consider one. After all I am 911-less at the moment. Or, maybe I should get a 930!

Porsche, you do not make such decisions easy.

As always, submit your ideas for future tech articles to me at George@ONeillAdvisors.ca and even better consider writing your own article for us to publish. Your feedback is always welcome.