TECH SESSION: When 8 Bars Are Better Than 4!

So what’s up with 8 bars being better than 4? Just to be clear, I am not talking about favourite local bars, which of course we engineers are known to patronize from time to time! What I am referring to spe­cifically are two, four-bar linkages, which at times some engineers enjoy designing almost as much as consum­ing their favourite beverage! With the re-introduction of the Porsche Targa in 2014, Porsche brought to market a vehicle that continues to provide a “WOW” factor every time the roof is opened and closed. Because of the mechanisms associated with the four-bar linkages that make the Targa roof movement possible, no longer does the driver have to manually remove the top roof section, as in previous generation Targas, since the components in the modern car now do the entire opening, storing, and closing. If you have ever watched the roof in action on the new Targa, you may have been struck by how ingeniously it works. I know the first time I saw the new Targa’s roof open in a Porsche promotional video, I had to rewind the video three or four times to fully digest what was making the top move, since the top roof section (controlled by the first four-bar linkage set), and back window with sur­rounding body section (controlled by the second four-bar linkage set), were moving simultaneously in sometimes opposite, yet always in a fully coordinated manner. You can see the roof in action on YouTube, and one particu­larly good video is located at https://www.youtube.com/watch?v=6H7xSw7bEms. To get a better idea what actually makes the roof work, first let’s take a look at the basics of four-bar linkages, and then come back to how these are applied to move the Targa’s roof and why Porsche is the only automotive manufacturer with such a setup. 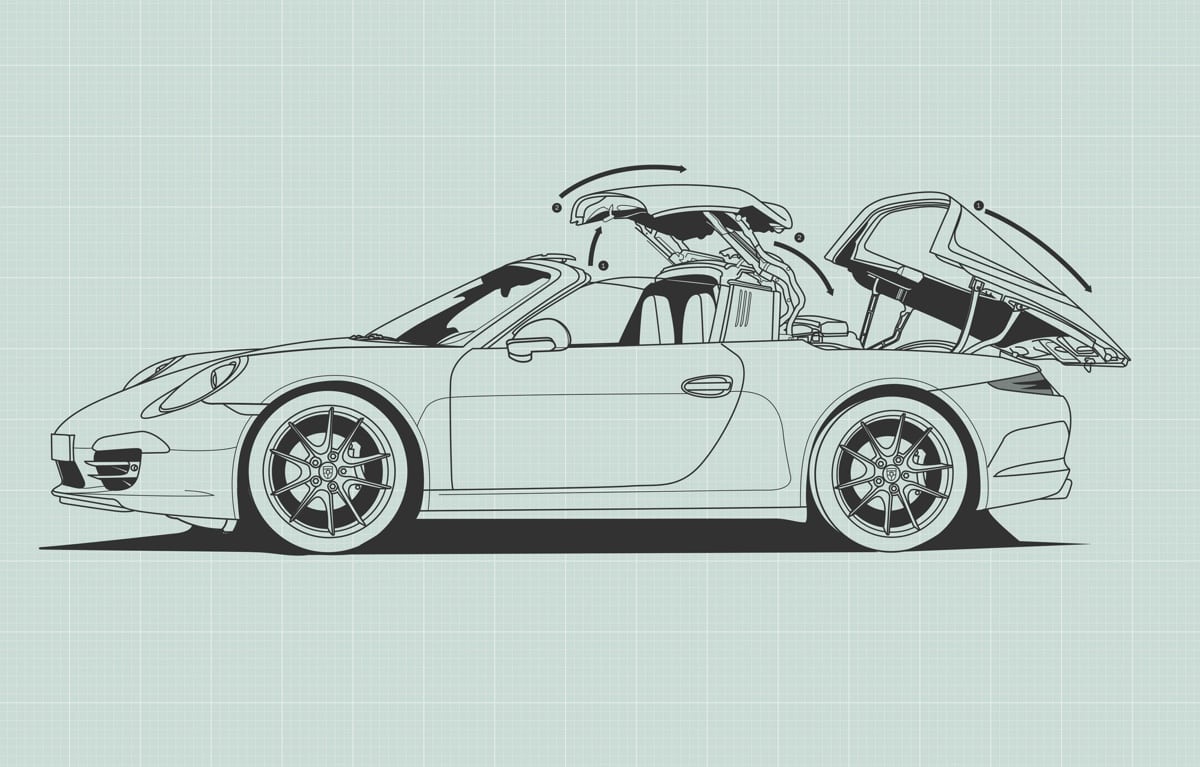 Four-bar linkages are one of those mechanical items that many people have at least some passing familiarity with, even though they probably do not realize it. For exam­ple, the linkages that operate vehicle windshield wipers are typically four-bar, simply meaning there are four links (or rods), with four rotation points that move the wiper arm the blade is attached to across the windshield.  Looking at the enclosed close-up detail drawing of a Targa top transitioning to the open position, the red lines are drawn on top of the actual links (on the driver’s side of the car), while the rotation points are shown in grey at the end of each link. Imagine as the top roof sec­tion moves when controlled by the first four bar-linkage, two links (those drawn in the almost vertical position) rotate about the pins located on the car body. The third link is really part of the top itself, and the fourth with the body. The bottom one (not drawn in red, but imagine a line drawn between the two bottom grey rotation points) is fixed since this is part of the car body. The top link drawn in the almost horizontal position is the link with the roof section attached to it. Therefore, the roof section moves from the closed position, swings backward to clear the roll hoop and down based on the geometry of the two attached links, and travels into the rear storage section under the window once everything is closed up. You may notice that the two (almost) vertical links referred to are far from being linear in shape, since they are formed specifically in the unique shape required to move the top from the closed position into the storage position while clearing all the other components located around the roof as it moves. Similarly, for the back window and attached fender section, a four-bar linkage controls the movement. To provide symmetrical support, there are two four-bar linkages on the passenger side of the car as well, for a total of four sets and therefore sixteen bars. At this point engineers start to get even more excited, with the mention of sixteen bars, in any context! 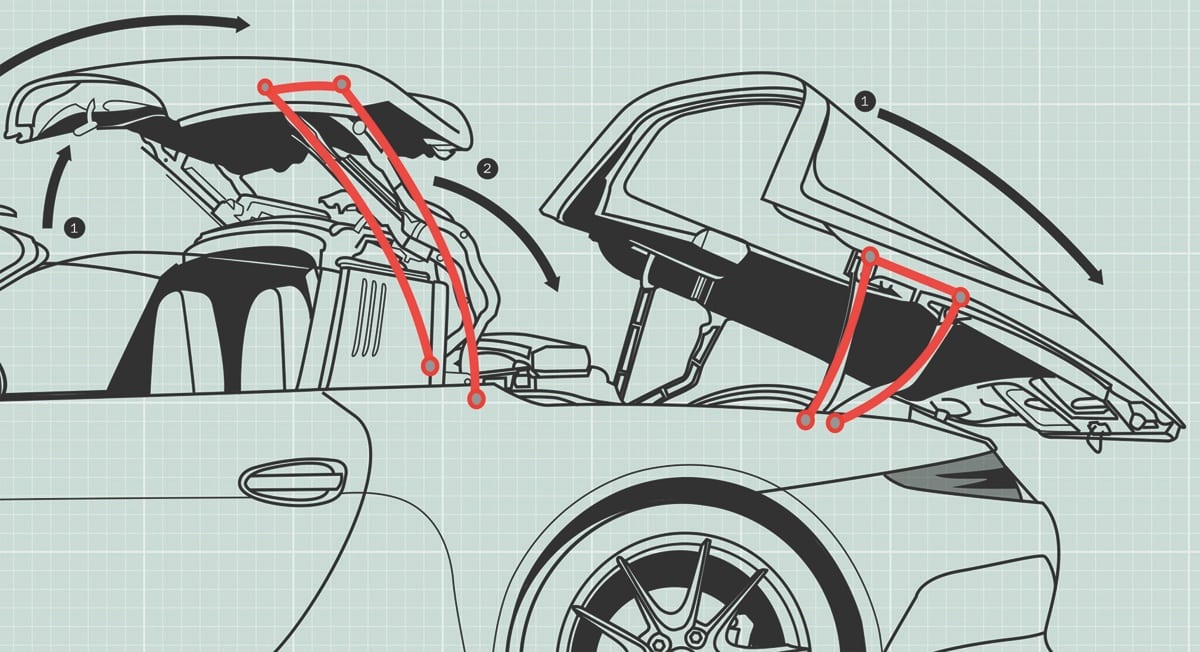 To some, Porsche’s 911 Targa has always been one of the coolest cars in the lineup, even though this model historically represented only a small portion of overall 911 model sales. Some people prefer not to see their car coming and going on the street since a certain amount of exclusiv­ity is desirable. Since being introduced in 1967 as a pre-emptive strategy by Porsche to continue to provide open-air motoring to customers who had enjoyed that in the previous 356 series cars, at a time when it was believed the U.S. (Porsche’s largest market) would make the sale of convertibles illegal due to safety concerns. Many vehicle manu­facturers at the time were also looking for alternative designs to still provide customers with open-air motoring, yet fulfill the expected government rules for safety. T-top cars were introduced, as seen on the Corvette in 1968 and later on other cars including Trans Am and Nissan Z-cars. Thankfully Porsche never offered a T-top car since they are prone to leaking even more frequently than some Targa equipped cars. In the Porsche Targa, the roll hoop behind the driver was highlighted in brushed stain­less steel to bring attention to it as a design feature, one which I personally quite like. Back then, the roof section above the driver and front seat passenger was removed manually and stored in the vehicle, effectively reducing cargo-carrying room. Today, storage is fully automatic with minimal intrusion on storage space. Innovation over the past few decades is significant after all.

Porsche as we know is all about excellence and innova­tion. The application of four-bar linkages to move the Targa roof in an automatic manner is impressive from an engineering and design perspective, and certainly from the driver’s viewpoint since one no longer needs to unlatch the roof panel and store it manually. A limitation of the new Targa system is that it must be operated while the vehicle is at a standstill, reportedly because when the rear window section is fully open it obstructs the rear brake lights, creating a potential safety issue if the top was operating while the car is in motion, like the Cabrio­lets can be now at low speed. Perhaps that issue will be resolved in a future version, but it is hopefully a minor annoyance at best. 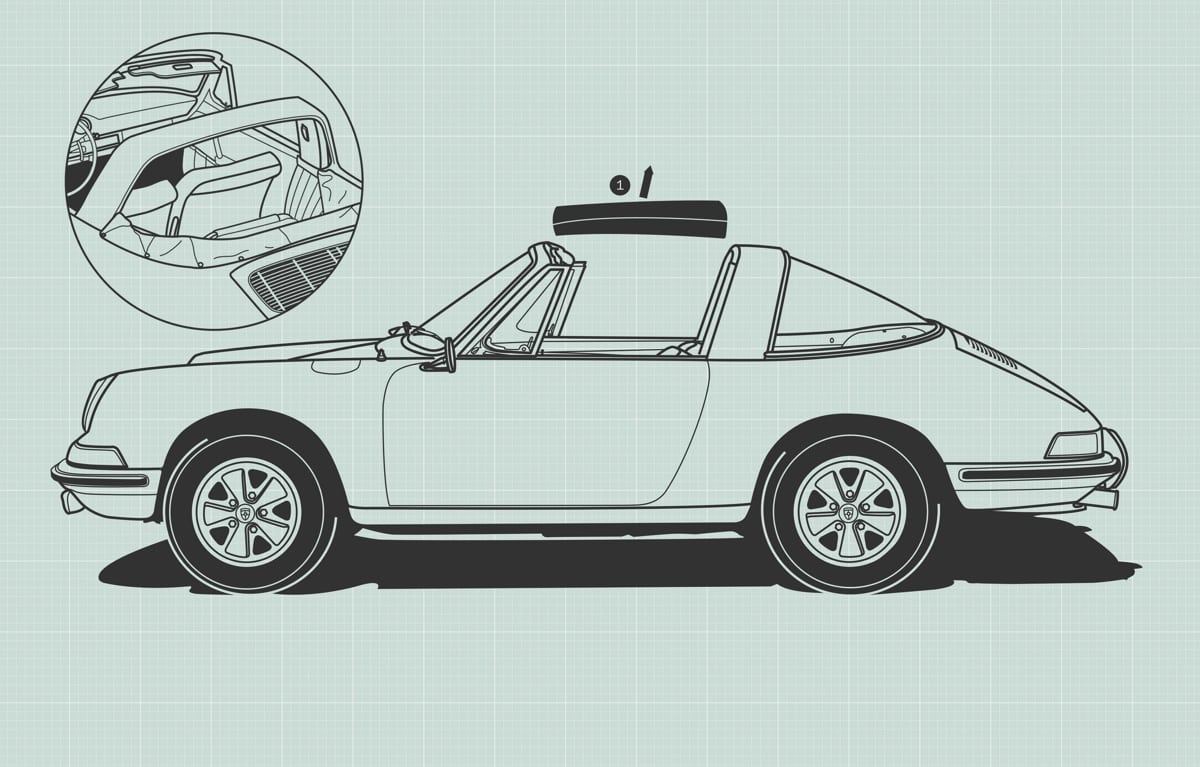 Porsche is the only automotive manufacturer to offer a Targa that has the roof electronically deployed, but we will most likely see those who copy the design shortly. Although novel, the Targa mechanisms are really just an intelligent application of the ideas currently in use on Porsche Cabriolets since these cars also use two four-bar linkage mechanisms on each side of the roof to open and store the top. But that is to take nothing away from the Porsche engineers who made this happen, a world first for a Targa vehicle.

So when are use your wipers the next time, you know a bit more about what makes them tick. And if you have a Porsche Targa, enjoy the cool opening and closing process of the roof. Four-bar linkages are a staple of mechanical engineering and although they really have nothing to do with local bars, engineers often dream up new applications for them while there!

Tech Editor’s Note: Remember, as always we’re looking for new ideas and new technical articles so please contact me and submit yours to: George@ONeillAdvisors.ca

Assassin In A Well-Tailored Suit