Testing the Turbo twins – Supercar in the snow? Heck yes! 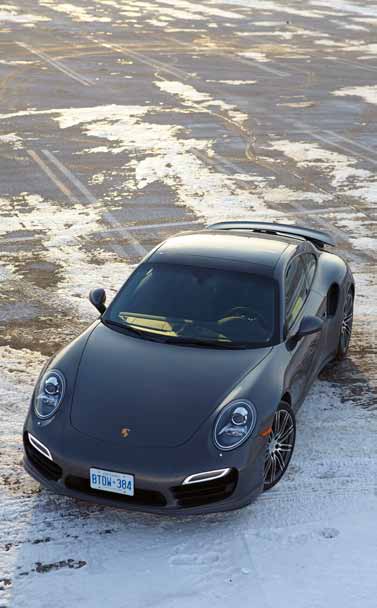 As I was about to clear the pristine blanket of snow from the 2014 911 Turbo waiting for me in my driveway, my neighbour yelled from across the road: “What’s it like driving a supercar in a snowstorm?” 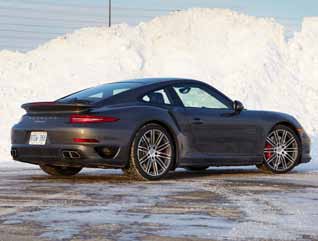 Well, aside from worrying about some dope without a brain—or snowtires—sliding into me, it’s truly amazing. 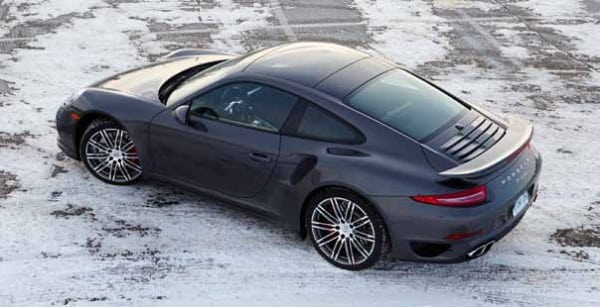 Not content to just drive to around for my allotted week, I opted to see how much traction the Turbo actually has with its four-wheel drive and winter rubber. The day after the big snowstorm we went down to my favorite donut place to see what would happen. It’s a nice quiet lot, usually empty, and with a lovely wintertime berm of snow piled high down the middle; perfect for practicing handbrake turns in my Mazda. But today there was a cop parked in the corner.

My paranoid mind wondered if my previous antics had attracted unwanted attention, leading the police to stake the place out after the snowstorm. Thank goodness I was driving a different car!

I pulled a slow, polite U-turn and headed to a nearby lot that’s in full view of the road. Did I dare? You have to admit, it’s already pretty ostentatious to drive a brand new 911 Turbo around in the winter, but to go and drift in a snowy parking lot in front of an audience? 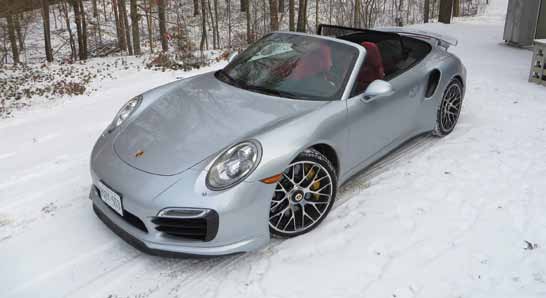 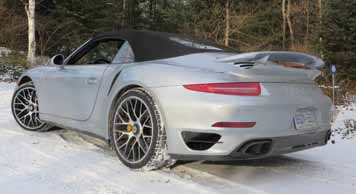 How could I face myself if I didn’t try? This car is phenomenal in the snow. It slides, it spins. And it does both with such control and grace, it feels like ballet. After 15 minutes of loops, figure eights and drifting, the car looked like it had been sprayed with snow. The roof was covered, the air intakes were jammed and the wheels had so much of the white stuff packed into them that it took a couple stern applications of the brakes to get any stopping power back. I had to force myself to stop and go home, before I got caught hooning.

The 2014 Turbo S Cabriolet and I had a much different interaction. We went on a weekend road trip of a few hundred kilometres in cold, but dry weather. On the highway, this car is dreamy. But it’s just such a shame to not be able to put the throttle down and try it out at speed.

Without a track to drive it on, my fun was had powering up from a standing start. The acceleration is so direct and forceful it’s almost frightening. It’s awesome power

in the truest sense. But totally controlled. This rocket launches you exactly where you point it. And it causes even grown men to squeal with delight.

All that acceleration is matched by the biggest brakes I’ve ever seen; those babies lock the car right back down to a stop in no time. And again, in a straight and true line.

I tried not to be one of those people who falls hard for the review car, but I have to admit it, both these babies were extremely difficult to give back. See if you can withstand the temptation when you go for a test drive.

Specs and pricing are available on the Porsche Cars Canada website. 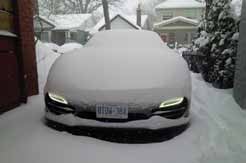