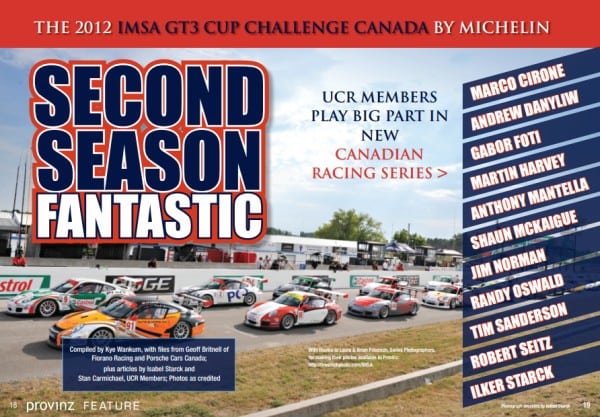 Compiled by Kye Wankum, with files from Geoff Britnell of Fiorano Racing and Porsche Cars Canada; plus articles by Isabel Starck and Stan Carmichael, UCR Members; Photos as credited 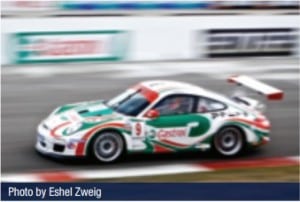 Again, this year, I was lucky to be included in the action of this new Canadian racing series, if only in the paddock. In only its second season, the series has made huge strides, showing an average of over 20 race cars in each event, many driven by no others than some of your very own fellow club members.
This is a highly competitive series of spec cars in three categories racing at the same time, with the classes determined by the age of the cars: the Silver, Gold and Platinum. Rules as to the preparation of the cars are very strict, leaving no room for modifications and so, the outcome is determined by race prep, suspension tuning, race craft, and driver skill. Please see more on the series rules at www.imsachallenge.ca 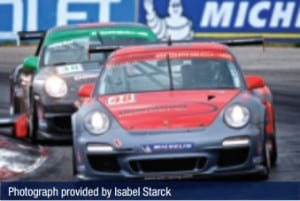 Further along in this feature, you will read the personal accounts of some of our fellow members’ endeavours but I wanted to take the opportunity here to tell a little story of just what racing means to some of our fellow Canadian competitors. The Canadian racing tradition dates back many decades now, but the guts and grit is alive as much now as it was yesteryear.
Our fellow member, Marco Cirone had an incident at Mosport in the Saturday afternoon race of the July event between corners 5-A and 5-B, which saw him turned toward traffic as the rest of the train was coming around that tight section of the track; needless to say he got pummelled. See the accompanying photos by Robert Moniz. The car was subsequently flatbedded into the paddock to be ‘dumped’ just outside the 6thGear / Bestline Autotech set-up, where everyone, including passersby, made sad faces and comments about just how bad that damage was and how the car would likely have to be ‘retubbed’ – it was ‘toast’.

Certainly it would be out of contention for the remainder of the weekend. That went on for about half an hour until suddenly, George Bourke of Bestline started pounding out the bodywork with a rather large hammer and, in between blows, started to proclaim that this car could be fixed right then and there. Vito Scavone and Matt Hardiman of Bestline seconded the challenge, as did the good folks from Porsche Motorsport, and before you knew it, activity abounded as the sun set over the Mosport Oval to the west. Parts were brought in from the Porsche trailer as the ‘boys’ stripped damaged suspension parts off the car and pounded bodywork back into shape
By the time I left at around 11 p.m. to get Rudy Bartling, who had come out with me for the day, back home for a very late dinner, the ‘boys’ had hooked up chains from the front and rear body cross members to a dually pick-up truck up front and another at the back to pull the car back into shape. Unbelievable! Incredible? Unheard off? Yep! But, you know, I had a feeling they could do it because I know these guys to have that determination and to never give up. 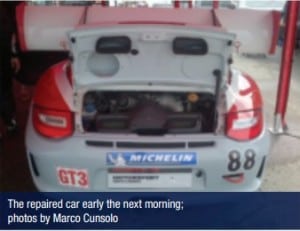 Next morning, Rudy and I showed up to a crew of very bleary-eyed individuals; they had been up all night and finished work at only 5 a.m. Best of all though: they made the second race of the weekend later that Sunday morning and, in fact, Marco Cirone set the fastest race lap with the car in that race! Truly incredible… the fans loved it and the fellow competitors loved it too – that truly is the spirit of racing in Canada and the embodiment of the GT3 Cup Challenge Canada by Michelin! 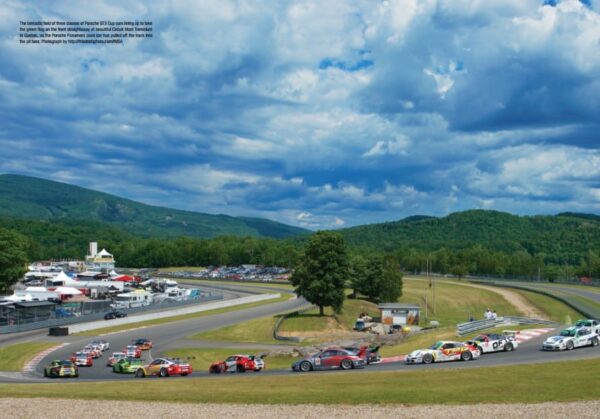 Click on the image above to get a larger version.

The fantastic field of three classes of Porsche GT3 Cup cars lining up to take the green flag on the front straightaway at beautiful Circuit Mont Tremblant in Quebec, as the Porsche Panamera pace car has pulled off the track into the pit lane. Photograph by http://friedrichphoto.com/IMSA

A Chance Meeting With Magnus Walker