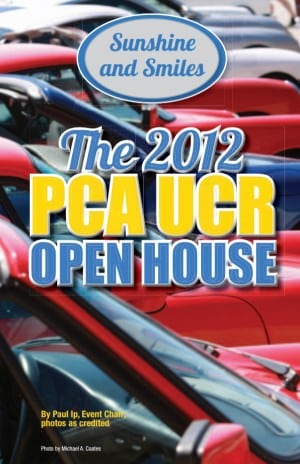 If our forecast in January for a bright sunny day on May 6th could be as accurate as this year, we would all be expert meteorologists. As it turned out, our wish for a beautiful day for the Open House was amply fulfilled, with plenty of sunshine under a bright blue sky, fanned by a mild breeze.

This year we decided to stage the Open House event in Markham, at the Markham Fairground, to appeal to a new generation of Porsche owners and drivers, as well as reaching out to new potential members. Many visitors actually congratulated us on staging this event in Markham this year, which made it easier for them to visit.

The Markham Economy & Sun, the local newspaper, was very supportive and carried a half page write-up dedicated to the event, which apparently helped attract a good number of visitors.

We counted round about 80 Porsches parked at the Markham Fairground during the event, plus the three dozen which took part in the Show & Shine and trade. About 200 Porsche club members and aficionados attended, in addition to the countless visitors to the other two shows on the same site, who streamed into our hall, excited to learn about everything Porsche.

Upon entering the event hall the new Porsche 991 displayed by Porsche Canada was the absolute centre of attention, drawing considerable queries and our friends from Porsche were quite busy handing out flyers.

Ernie Jakubowski’s yellow 944 race car was another magnet on the ground, pulling many visitors to its spot. Segal Motorcar and Orangeville AutoSport both displayed their choice Porsches
for the event. Looking at the busy traffic around our Goodies Store, proprietor Andy Hunt probably had a bumper harvest, too. Vaughan Finetouch displayed a 1967 red 911 S owned by Mike Martin, which was indeed a head turner. In addition, Pfaff Tuning, Dent Doctor, Nineapart, and Ultimate Transportation were all satisfied with the result.

Our event chairs were busy as well, explaining the programmes and schedules to a large number of first-time visitors, many of them new Porsche owners and potential new members.

Members and friends were all very animated with updating each other and in exchanges about their beloved road machines. The entire event site was buzzing with activity, where everyone was happy to meet and chat to other like minds.

The writer wishes to thank all the volunteers who helped make this event a success, especially Kye Wankum for creating and putting up all the décor for the event, to Jessica Usselman for hosting the Show and Shine, and to Paul Marrello for helping in the Show and Shine.