The Upper Canada Region of the Porsche Club of America was officially chartered on July 21, 1976. After recognizing our history and celebrat­ing our 40th Anniversary at several events, our Annual Banquet would be the last of this milestone year. With a record attendance of almost 200, this final 40th an­niversary celebration was held on Saturday October 29 at the Islington Golf Club. It was clear from the buzz in the room and the animated conversation that all were enjoying the camaraderie at the banquet, which also provided an ideal opportunity to recognize our long-term friends and supporters, namely, Porsche Cars Canada, our Porsche dealers, our volunteers and our long-time members. Over the past 40 years our partners and UCR have been sharing our passion for the Porsche brand and working together on mutual interests. We all look forward to supporting and co-operating with each other in the future. 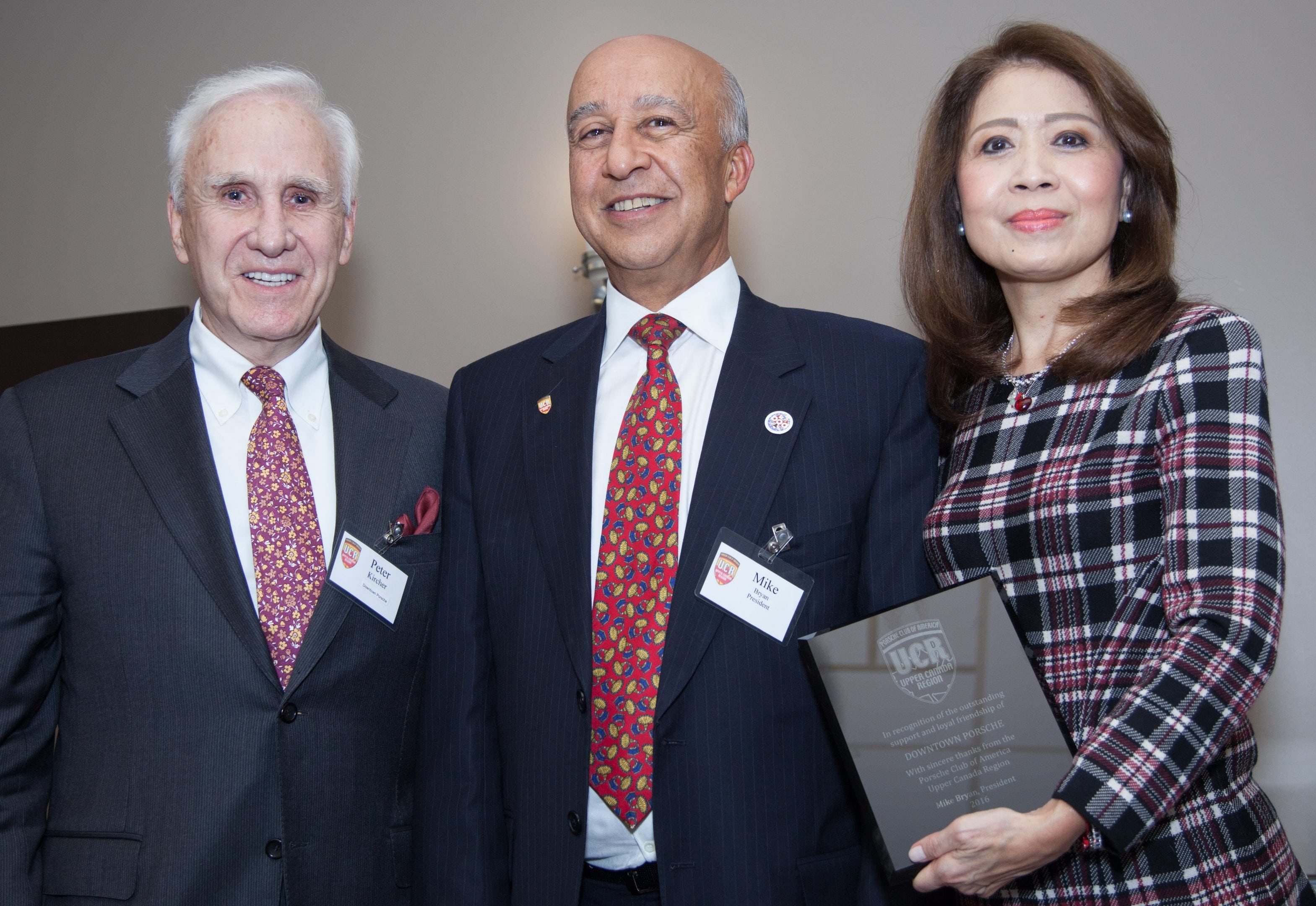 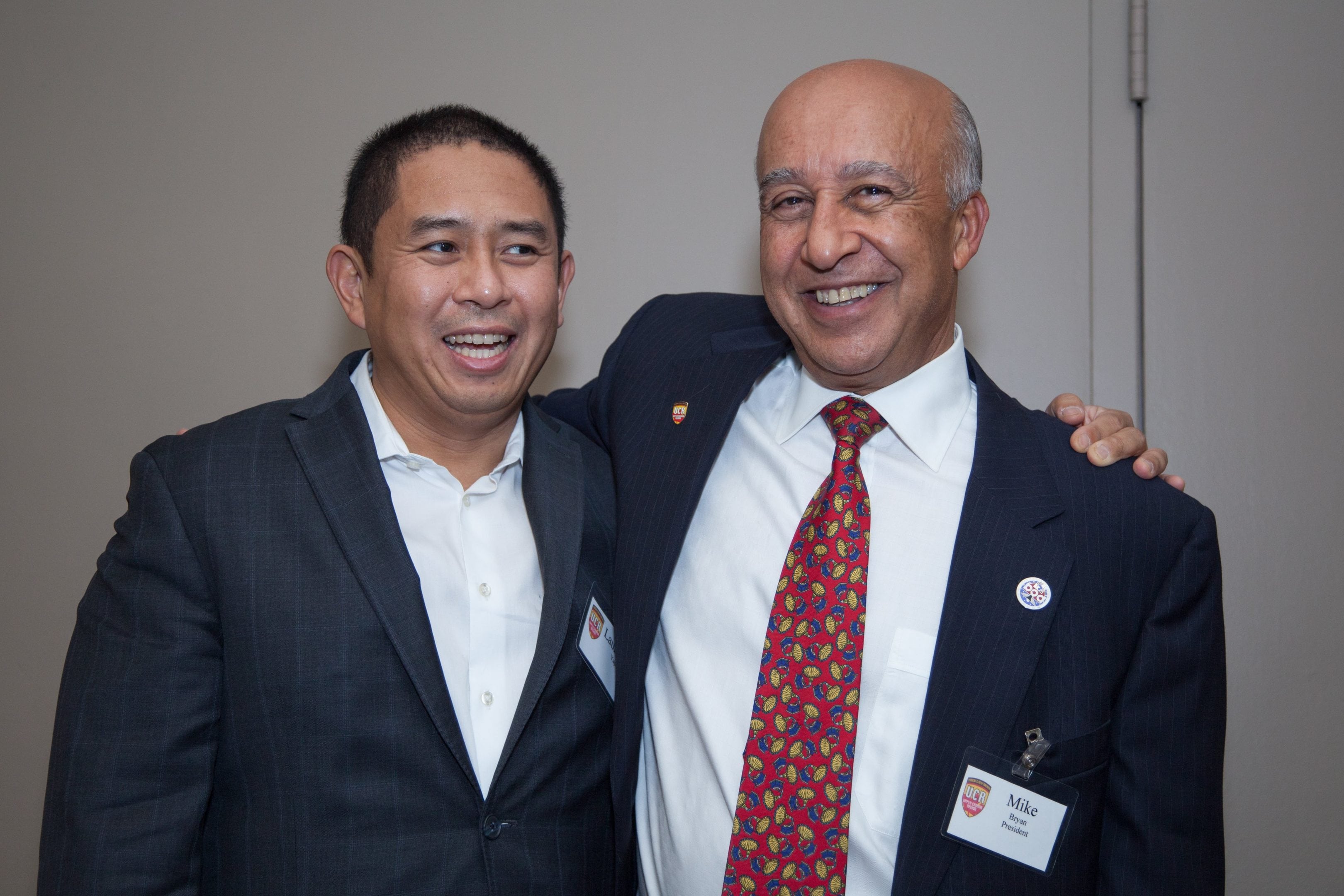 UCR is the largest of PCA’s 143 regions, with over 2,600 primary members and close to 4,000 members including family and affiliated members as of October 2016. Our growth is fueled by Downtown Porsche and Porsche of London who provide complimentary first year PCA UCR membership to Porsche vehicle buyers. Mike Bryan, UCR past President, presented an award of appreciation to Helen Ching-Kircher, Dealer Principal, President & CEO of Downtown Porsche and Dr. Peter Kircher, General Manager of Downtown Porsche, to thank them for helping UCR win the PCA award for “Greatest Actual Growth” in five of the past six years.

Mike Bryan had already presented similar awards of appreciation to David Perruzza, Marketing Manager of Porsche Centre Oakville and Laurance Yap, Director of Marketing of Pfaff Porsche, at our 40th anniversary family picnic in July. Mike thanked them again at the banquet for their continued support of UCR.

In recognition of their friendship and loyal support, Mike Bryan presented an award of appreciation to Margareta Mahlstedt, Director of Marketing at Porsche Cars Canada. In thanking UCR, Margareta said how impressed she was by the diverse range of UCR activities organized entirely by vol­unteers. Porsche Cars Canada will open its new corporate headquarters at the north­east corner of Hwy 404/401 in 2017, and will organize an event for UCR members to visit the new facility. Before closing, Mar­gareta presented a trophy to Mike Bryan to congratulate UCR on its 40th anniversary.

Before everyone arrived at the ban­quet, Kathrin Menge, Customer Relations Manager of Porsche Cars Canada had placed a surprise for us by bringing Porsche Museum die-cast model cars for every attendee. Each model car had the words “Porsche Cars Canada Congratulates PCA UCR on 40 years” engraved on the base to which the model was attached. This was such a thoughtful 40th anniversary gift for banquet participants. The front cover of this is­sue of Provinz features one of the four model cars, which include a silver 1948 356, a green 1974 911 turbo, a blue 991 Carrera S and a burgundy Macan Turbo.

Mike Bryan thanked all UCR volunteers who provid­ed their time and selfless efforts in 2016 to organize 50 UCR events that met the various interests of our 4,000 members. We had very strong participation at almost every single UCR event, such as our monthly Drivers Education (“DE”) sessions between April and October, our Shift-into-Spring (aka “Open House”) early May and our Monthly Socials. We also had a record 19 Fun Runs/Rambles/Tours in 2016 with over 700 participants. The highlights of the year include:

Our annual “Driven2Smile” event at Canadian Tire Motorsport Park on the first Friday in June organized by Jill Clements-Bartmann and Del Bruce. More than 90 UCR instructors and members gave rides to over 400 physically challenged children and their families, and hosted a lunch for them. This was the fifth consecutive year of UCR giving back to the community in this way.

PCA’s “61st Porsche Parade” took place in Jay Peak, Vermont in June. It’s PCA’s annual national convention with a typical attendance of 2,000 members from across North America. Due to the relative proximity of Jay Peak, we had 85 UCR members making the seven-hour drive to attend. During Parade, UCR was honoured to receive the 1st place award in the National Website Contest (Class V Region). Kudos to our webmaster, Ken Jensen, and his team of Scot Adams, Hilda Kelly and Guenter Gamauf.

Mike Bryan with those accepting their 25th Anniversary awards; Pete Mosney, Sussi and Ken Jenson, Bob and Vivien Hindle. Ken was our President in 2000 and is currently our award-winning webmaster

Our “40th Anniversary Family Picnic” took place at the Boyd Conservation Area in Vaughan on July 23, with a record attendance of nearly 500 members and their families. At the banquet, Mike Bryan presented a $50.00 UCR Goodie store gift certificate to Sean Seaton, who was the winner of the picnic photo contest. His panoramic picnic photo showed the “all-in Shown ‘n Shine” display of 150+ Porsches in a huge circle. A one-minute clip of our 40th Anniversary Family Picnic, made by Ryan Tam, was also shown at the banquet.

Porsche Centre Oakville and Policaro BMW were Presenting Sponsors. They also provided a GT3 pace car for the Porsche race and a BMW i8 pace car for the BMW race. Porsche Cars Canada has been the National Sponsor for our club race during the past 21 years, since our first UCR Club Race took place at Mosport in 1996 and Braidan Tire has been our Trackside Tire sponsor for many years.

5th Anniversary award recipients: Foster and Karen Zanutto, Steve Revoy, Anthony Wong and Vivian Lee with Gregory and Izabela Sachs. Foster is the UCR Secretary and Gregory is the Chair of our Open House.

Hazel de Burgh and Martin Tekela also received awards in recognition of their service to the club.

A video clip of the 2016 Can/Am Challenge UCR Club Race, made by Ryan Tam, was shown at the banquet. Ryan is the son of Roy Tam, who was a rookie racer and received his PCA Club Race license at the race. Ryan made this video capturing his Dad’s first PCA club race experience with the assistance of a five-person crew, consisting of Ryan and four school friends.

Kathleen went on to thank Walter Murray, UCR Club Race Co-Chair for doing a superb job planning the 2016 Club Race and leading the club race committee. Walter is currently planning the 2017 UCR Club Race, and has several interesting ideas that should make the 2017 event even more exciting. Kathleen also thanked her “one-person crew” – her Dad, George Wong – for supporting her at each of her UCR Club Races during the last eight years.

Recognition of Past Presidents, Anniversary Members and Volunteers

Mike recognized the 10 Past Presidents who were present at the banquet. He also acknowledged the lon­gest-serving member present – Gerd Schwarzkopf, who has been a PCA member for 50 years, first with Niagara Region and then with UCR after it received its charter in 1976. In 2016, there were 323 members who have been part of the UCR family for five, 10, 15, 20, or greater five year milestones. Mike presented certificates of apprecia­tion to 22 of those long-serving UCR members present at the banquet. 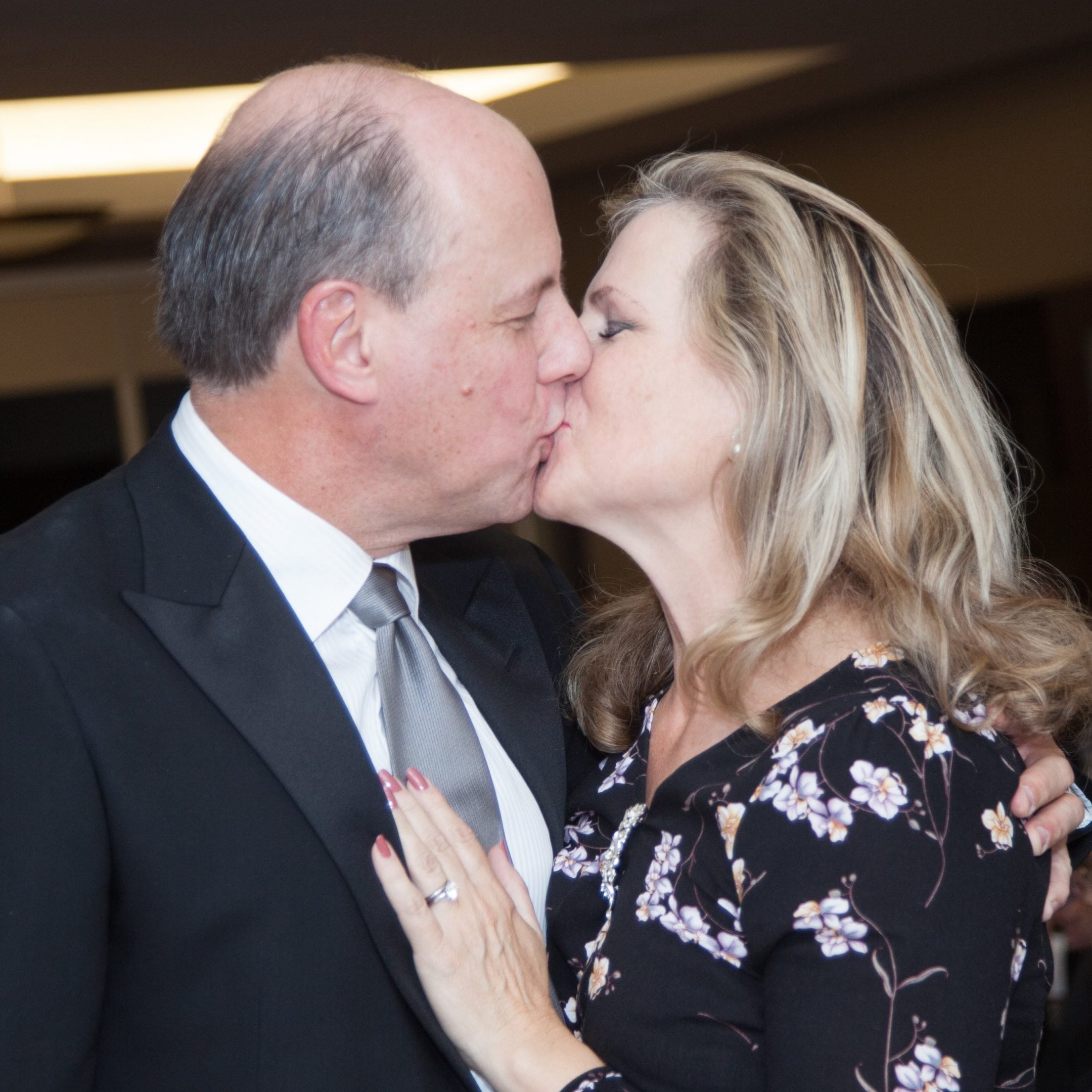 Another interesting anniversary was celebrated at the Banquet. Michael Pohlmann and Veronica Low marked their one-week wedding anniversary 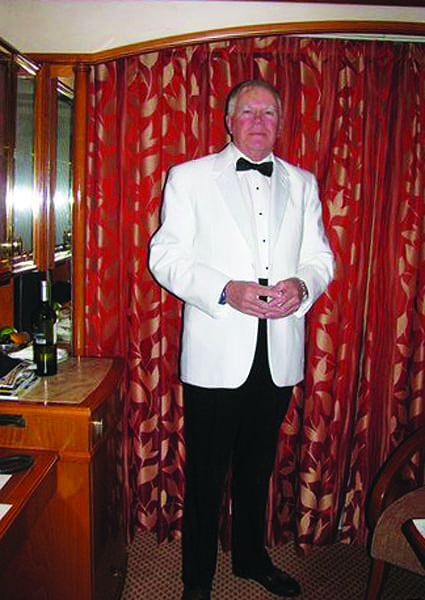 “The name is Dowdell, Neil Dowdell”

Mike Bryan recognized Hazel de Burgh, who is step­ping down from her roles as a Director and Fun Run Chair, while remaining Street Survival School Chair and a DE instructor. Mike also recognized Martin Tekela, who is stepping down from his role as Monthly Socials Chair, and he will remain Chief Instructor of our Street Survival School plus a DE instructor.

Then it was time for Mike to announce who had been chosen as UCR’s 2016 “Enthusiast of the Year”. It was Neil Dowdell, a popular and very active member since he joined UCR in 2003. Neil has organized a number of fun runs and has worked on the grid at our Can/Am Challenge UCR Club Race during the past 11 years. In recent years he has been grid captain and volunteer coordinator at this event. Neil has also raced several vintage Porsches and owned a variety of exotic cars.

Besides celebrating our 40th Anniversary, we also celebrated a one-week wedding anniversary of Michael Pohlmann (UCR Treasurer) and Veronica Low at our banquet. Their wedding had taken place just a week ago on October 22. Congratulations, Michael and Veronica!

We thank the following volunteers for making our 40th anniversary banquet a hugely enjoyable success: John and Rosemary Adam as banquet consultants; Mario Marrello for helping with online registrations for the event via ClubReg; Carrie and David Tipton for de­signing the beautiful table centrepieces and distributing Porsche model cars at each banquet table; Izabela Sachs, Emma Sachs, and Karen Zanutto for helping at the reg­istration desk; and Michael Coates, UCR photographer, for taking pictures throughout the evening. 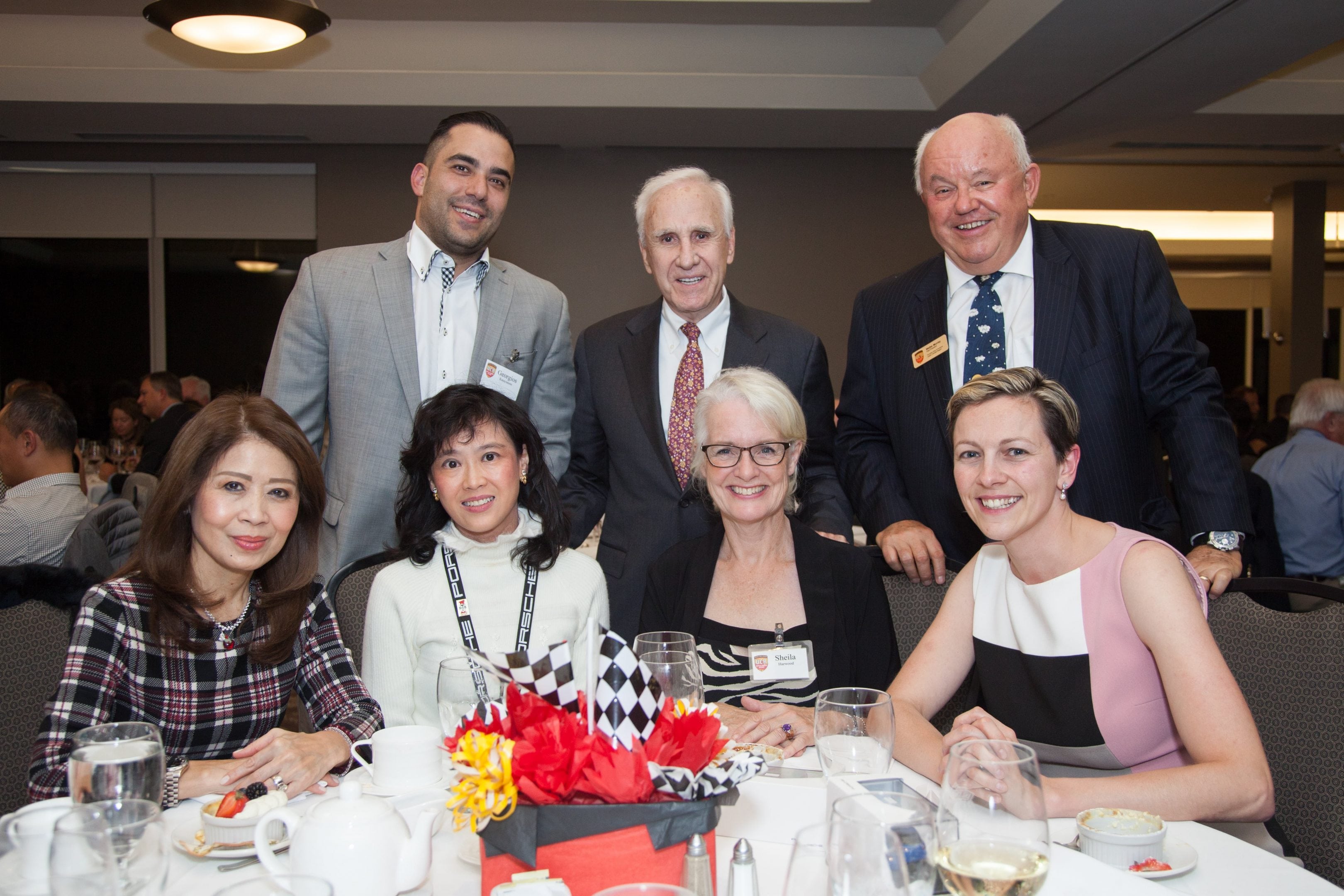 David Perruzza and Yolanda Gampp, Mike and Pam Bryan, Laurance Yap and Anna He, with Michael Pohlmann and Veronica Low-Pohlmann and Kathrin Menge