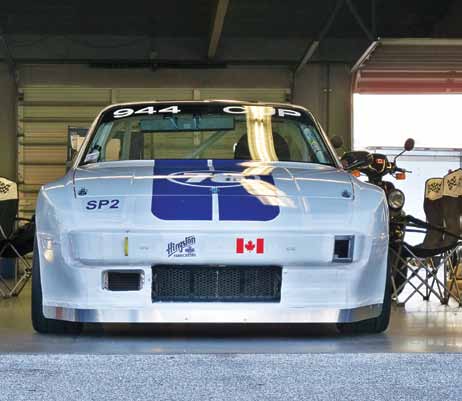 Randy’s 944 in the garages at Daytona. Photo by Gary Lounsbury

After a successful championship in the 2012 season, 2013 was the next target–a repeat. But like all things, planning is the easy part.

We won, but we lost.

The year started out like the last one, strategically planning which weekends to enter to fit everyone’s schedules. We all—Max Schoemer, Gary Lounsbury and I—decided on four weekends: Clash at the Glen, CTMP VARAC Historic Grand Prix, CTMP – UCR, and the end of season 944 Cup Championships at the PCA event in Daytona Beach! 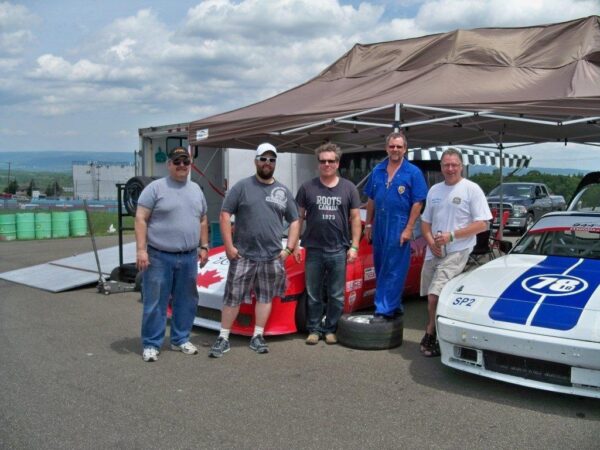 The plan was for the three of us to attend Watkins Glen, so we booked rooms and started to prep the car. One of those planning sessions occurred at The Angel Inn in Niagara-on-the-Lake in March. Max was complaining about a pain in his calf muscle the whole time, which was uncharacteristic for him. We all agreed that a “Charlie horse” shouldn’t last as long as it had been bothering him, and he should get it checked out.

What followed in the next few weeks changed everything for all of us.

Max was diagnosed with pancreatic cancer. All of the excitement and luster of the upcoming racing season was immediately tarnished. He decided we had to continue with our plan. Max explained his situation to me in his typical fashion. “Look at it this way, I’m leading the Daytona 24hrs and just came in with transmission issues. I’m not going to win, but after changing the transmission I still have some laps to run.” So onward and upward we soldiered.

Gary and I ended up heading to the Glen without Max, as he opted out. The weekend was again a record-breaker for attendance in the SP classes. We were in constant contact with Max for his input and direction on strategies. The team was still working well as we again came away with pole position for the race. 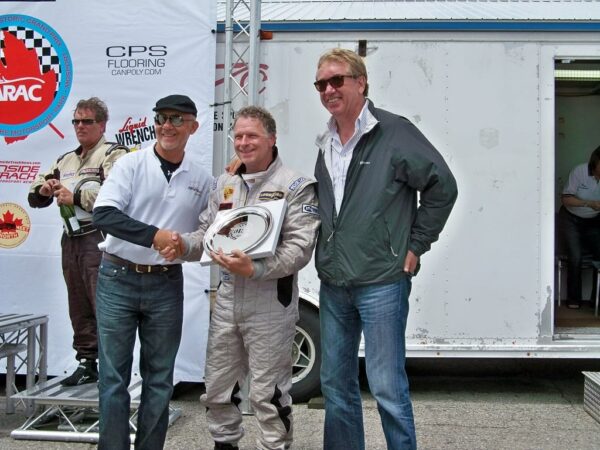 But the two races proved an exercise in frustration within the confines of mixed class racing. In Sprint 1, the faster SP3 cars, driven by slower drivers, would use their right foot to pass, usually right at the end of a long straight and then, predictably, STAND on the brake into an entry of a corner, effectively eliminating my momentum. I out-qualified many of these cars. Sprint 1 was bad, Sprint 2 was horrible. Lap after lap I’d be able to pass this SP3 car and then she would dive bomb me into the corner and kill both our lap times allowing car after car to catch and pass us. I finally decided to execute a very risky low percentage pass at the right place to make it stick. Thankfully, she relented. In one lap I couldn’t even see her in my mirrors anymore. However at this point in the race it was too late to improve position. Ultimately we finished 2nd and 3rd in class for the weekend. We really wanted to take the trophy back for Max.

Max passed on the Thursday following that event, June 6th, 2013. 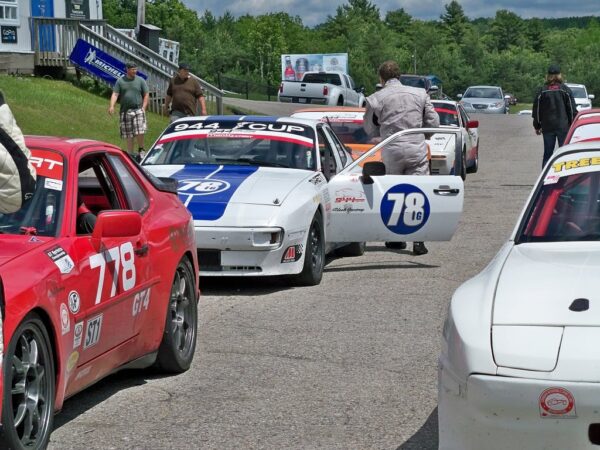 In the impound after the last race at the VARAC Canadian Historic GP. Photo by Gary Lounsbury

At the following event, VARAC Historic Grand Prix at CTMP, every 944 wore a black ribbon decal in memory of our friend. This was the one event Max was really looking forward to attending. David Deacon, the orchestrator of the original Rothman’s 944 Porsche Series, was to be the Grand Marshall of the event. Other significant Porsche enthusiasts of the series including Ludwig Heimrath, Auguste Lecourt and even Rudy Bartling came to watch, amongst many others. Cars driven by  Ron Fellows, Scott Goodyear and Ludwig raced. Max’s wife attended, along with other family members. To bring four wins home out of five races was an amazing tribute. 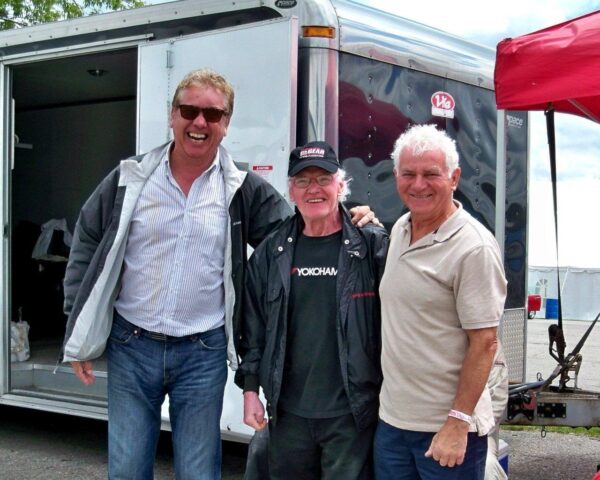 The UCR weekend at CTMP was also a good weekend for the newly minted MadMax Racing team. Running with both series, the 944 Canada Challenge and the 944 Cup, we managed to take home a 1st and 3rd. 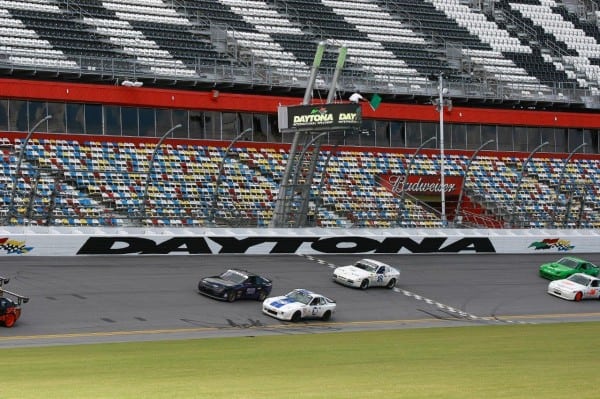 Our final race was to be at Daytona International Raceway, hosted by PCA. Gary was figuring things out until his finger was broken. Track configuration, length on the oval vs infield, top speed, aerodynamics and it went on and on. The actual configuration of our cars is generally set up for tracks like Mosport and Watkins Glen where the top speed in an SP2 car is in the 115 mph range. Daytona is a completely different story. We’ve all watched NASCAR and the 24HR races there and know the oval is looonnng. Gary’s calculations quickly identified we’d be on the rev limiter for over 3/4 of a mile! Great on the infield, a killer on the straight. Not really good for our poor little 2.5-litre, either. After making some decisions and packing some contingencies we headed south.

I have family in Sarasota, so we decided ahead of time that this was to be a family vacation of sorts. Of course there happened to be another race at Sebring the weekend before the Daytona date and Dave Derecola, chief of the 944 Cup Series, had invited me to race with him in a team effort in the Chumpcar Series for a 14-hour endurance race. We stayed at the hotel trackside, kids lived in the pool, I in the pits.

I was elected to start the race, in a car I’ve never driven before, for a two hour session at a track I haven’t driven in years. Thankfully the Miata was prepped flawlessly and Sebring hasn’t changed too much in years. I made it 1.5 hours before a half shaft snapped, forcing me to the pits for repairs. We had been running as high as 7th in a field of over a hundred jalopies. Six hours later I was suited and ready to jump in for my second stint, but our fourth driver met with unavoidable contact, mostly due to a softening brake pedal. Race done. 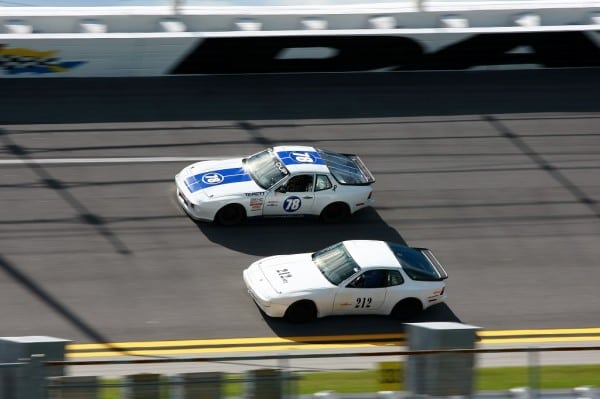 Driving into Daytona International Raceway is an experience all to itself. Coming out of the tunnel on the infield side I pointed to the turn one section and Kelly, my wife, exclaimed, “What’s that?” I told her it’s the track and her response was “Nooo, really? It looks like a ski jump!” As we pulled into the garage area, we were met by Gary with a huge ear-to-ear grin! He had flown in earlier and had already secured our garage and was armed with the lay of the land. “We’re at Daytona International Speedway,” was all he could say. 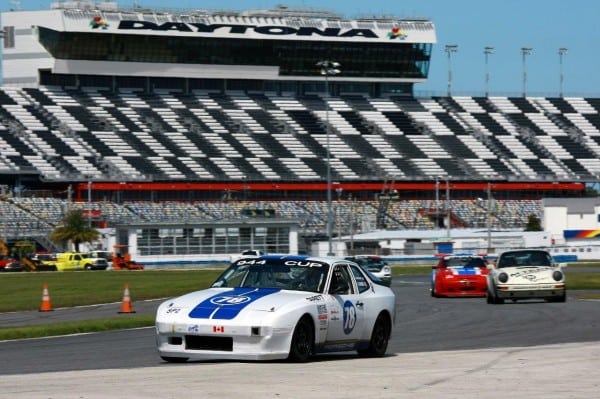 Snaking through the infield at Daytona. Photo by Colour Tech South Motorsport Photography

It was my first time on this track, check one more off my bucket list. I can’t tell you how awestruck I was coming off grid entering the pit area under those grandstands. Once I got the jitters out of my system, all the pre-planning Gary had organized was paying off. Tires were good, track configuration was as he had specifically described, right down to the shift points.

I quickly figured out the benefit of a cool suit, which I didn’t have. Sitting on grid waiting for the track to clear of some 911s, we sat for 25 minutes suited up in hot race cars with an ambient temp of 84F. As we sat, a rain burst blew through and when we got track, the surface was still wet. We sat on pit road for a few minutes to allow the track to dry a bit. Once I got going, missing the standing water in the infield section was basically all that mattered. I have a much better appreciation for the guys who run this track in the wet during the 24HRS. After pulling back into the garage area, Gary informed me that we secured Pole position by +3 seconds! How’s that, Max?

The next day the weather was clear as we lined up for the race. This was where Max would have helped most. He would have already identified who was the competition and where they were quick and where not. So I had a bit of anxiety regarding who the players were going to be. As mentioned earlier, we again had to deal with a combined class issue, and I had out-qualified a large portion of the field, including SP3’s. At the green flag several, and I mean lots, of the faster cars just blew by. Now some of the local talent were using the draft to take advantage of these faster cars, an art that I was quickly adapting to. At the checker flag I started to think that our tranny and wheel/tire configuration was not the right choice. As it turned out, 1st through 4th and 6th place SP2 cars were running the 2.7-litre motors with a 16” rim. Our fastest lap time was only 0.7 seconds off the winner’s best lap. At the end of Sprint 2, the first place car was 15 seconds ahead of us, but 1.3 seconds covered places three through five. We ended the “money” race with a strong 5th in class, sewing up the 944 Cup Canada Chapter Championship, but missing the national title. 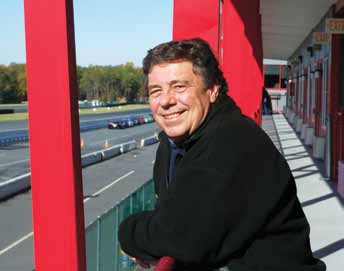 Max would have been proud of the little car and team he envisioned. Cheers! We miss you, Max.