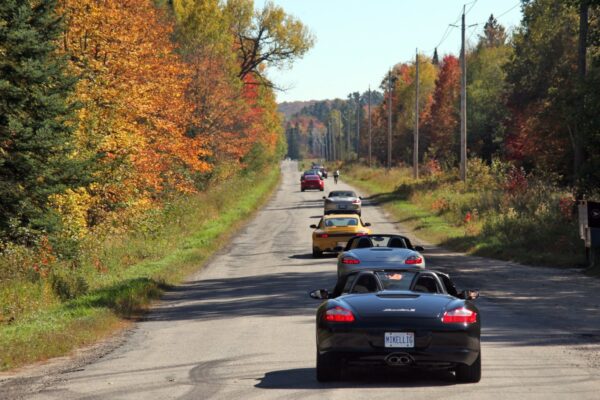 We went looking for a Fun Run through the Autumn leaves and came home with much more!

Anne and David Forbes, with Sheila and Walter Murray, the Fun Run organizers, hosted us royally from morning until night. We met at Walter and Sheila’s farm outside of Bracebridge. It’s quite a beautiful sight pulling into a yard full of Porsches and Horses. Walter’s bright red Porsche 329 track car sat under the maple tree, while Sheila’s horses, Santonio and Teko, stood by the fence deciding who they would approach and when. It was truly a show of horsepower!

David and Anne greeted everyone as we arrived. We had time to relax and visit with friends and meet new members over coffee. It was interesting to see children as well as dogs tumbling out of the back seats of cars. One teenager what told me he liked driving with his dad for the adrenalin rush. We hook them early! The dogs thought it was more about the wind rush.

The organizers divided the forty cars into three teams. Red ran with Walter and Sheila, Blue with David and Anne and yellow with Ernst and Laurie Johle. Each lead car took a different two-hour route in the morning, and switched in the afternoon.

We were very impressed by the courteous local drivers as they pulled over to let the interlopers stay together on the winding roads. People walking or biking stopped to give us a thumbs up and admire the sights and sounds of a dozen Porsches in a row. In one small town a group of ten Viper owners (“wannabe’s”) waved as we drove by…must have brought tears to their eyes. 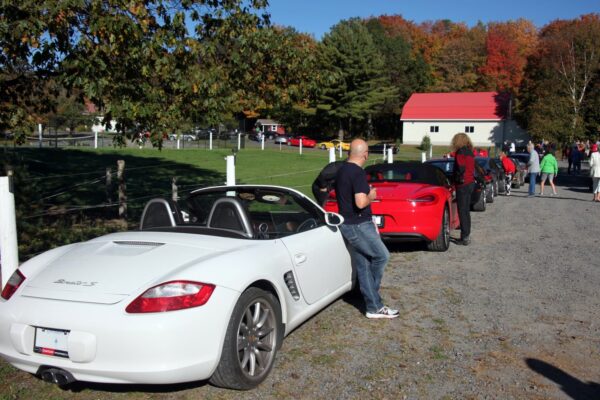 The Cottage Bar and Grill restaurant in Huntsville welcomed us for lunch. The sun was shining and they seated us outside on the riverside patio…a beautiful setting and delicious food. Sitting with interesting people and creating new memories is a bonus reason for members to participate in these activities. After a group picture was taken in the parking lot, we headed out for an afternoon of show stopping sights. Mountains of maples, oaks and birch spilled their vibrant colours over sharp rock faces straight into lakes reflecting it all back to us. Off to the next breathtaking scene on the byways and highways through Muskoka.

For the drive it was a collection of moments of pure joy driving the challenging roads. For the passenger it was a sensory trip seeing the warm reds, oranges and golds, smelling the fresh air, hearing the acorns bounce off the hood, feeling so at one with the car as we peeked over the brow of the next hill. We both found this was a time when we truly got to experience our car.

All good drives must come to an end. Sheila is to be commended and thanked for hosting 80 members in her home after the Fun Run. Tasty cheeses, crackers, fruit and refreshments awaited us at the farm. Relaxing on the porch, sharing experiences over a glass of wine, seemed like such a Porsche thing to do. Neighbours Paul and Shirley Hammond, retired owners of Muskoka Transport, dropped by in their 1935 red International pickup truck to admire the cars and be part of the excitement. The generosity of the UCR club shone through the organizing committee and volunteers. As the group began to disperse, an invitation to meet at the Japanese Restaurant Wabora for dinner was extended to all who were able to stay a while longer.

Thanks for the Fall 2013 Fun Run Memories! How our eyes and ears have been filled with the Autumn treasures of Muskoka road pleasures.