A true icon and one of the automotive world’s great success stories, here’s some background on how we arrived at the one-millionth 911.

The Porsche 911 has been inspiring car enthusiasts the world over since its debut as the 901 at the International Motor Show (IAA) in 1963. Today it is considered the quintessential sports car, the benchmark for all others. The 911 is also the central point of reference for all other Porsche series. Every Porsche is the sportiest car in its category, and each one carries a piece of the 911 philosophy.

The model line has been continually enhanced since its debut in 1963. However, the unique character of the model, renamed 911 in 1964, has always been preserved. Now, the modern classic has reached a new milestone: since 1963, more than one million units of the 911 have been produced in Stuttgart-Zuffenhausen. This might sound a lot, but in reality, it is very little: many premium manufacturers produce more than twice as many vehicles in a single year. In other words, the Porsche 911 was, is and shall remain an exclusive sports car. 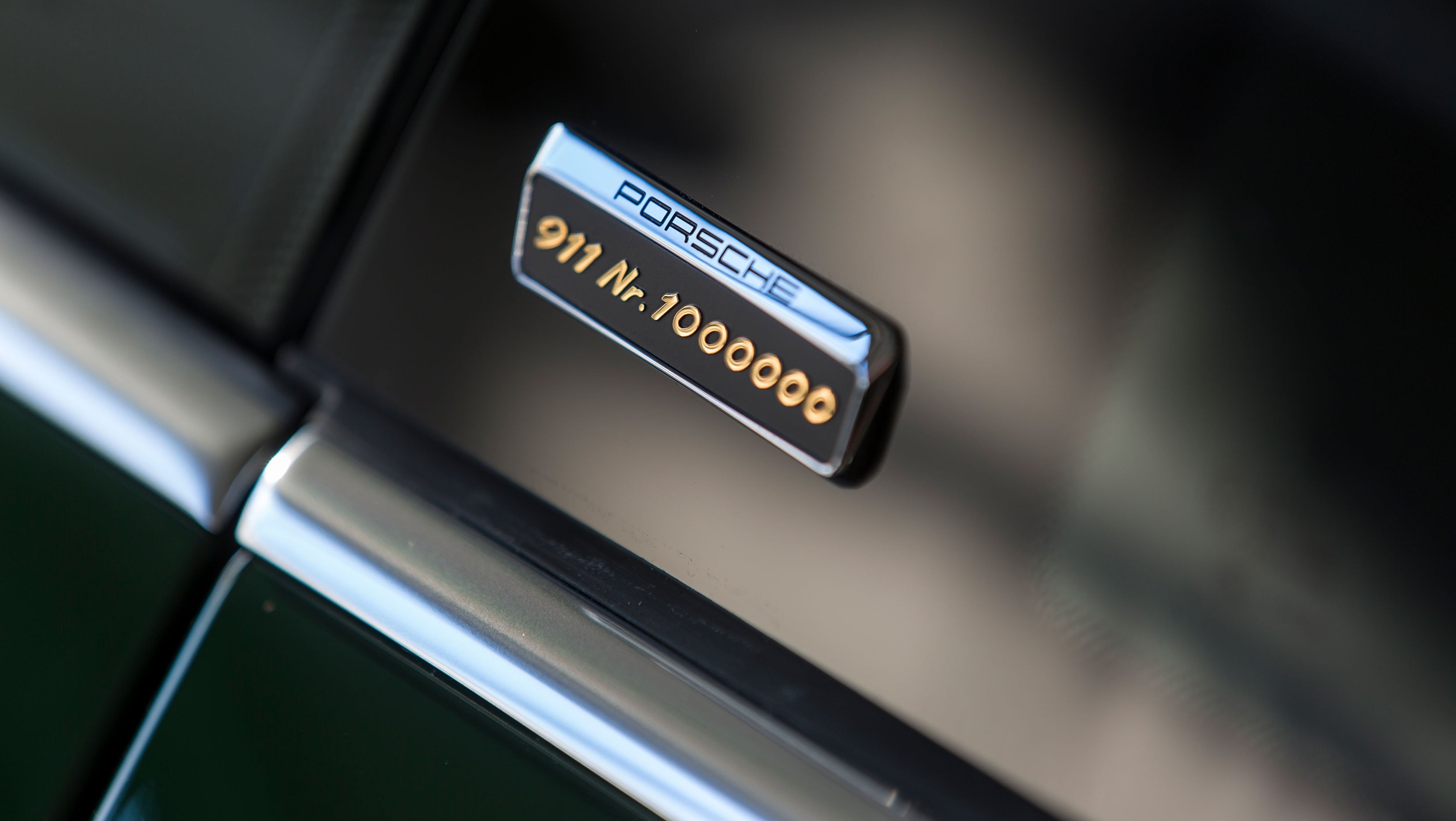 The Porsche 911 is unique in the automotive world, its distinctive character is also reflected in its customer base. Numerous well-known artists, actors, fashion designers, sportsmen/women and entrepreneurs throughout the world have become enthusiastic 911 drivers, some of whom have remained faithful to the sports car series for many decades. And the Porsche 911 has also made many appearances in films and on TV. As leading actor and co-producer, Steve McQueen paid a resounding tribute to the 911 in his 1970 film masterpiece “Le Mans”. For the first few minutes of the film, the actor’s dark green 911 S takes centre stage. 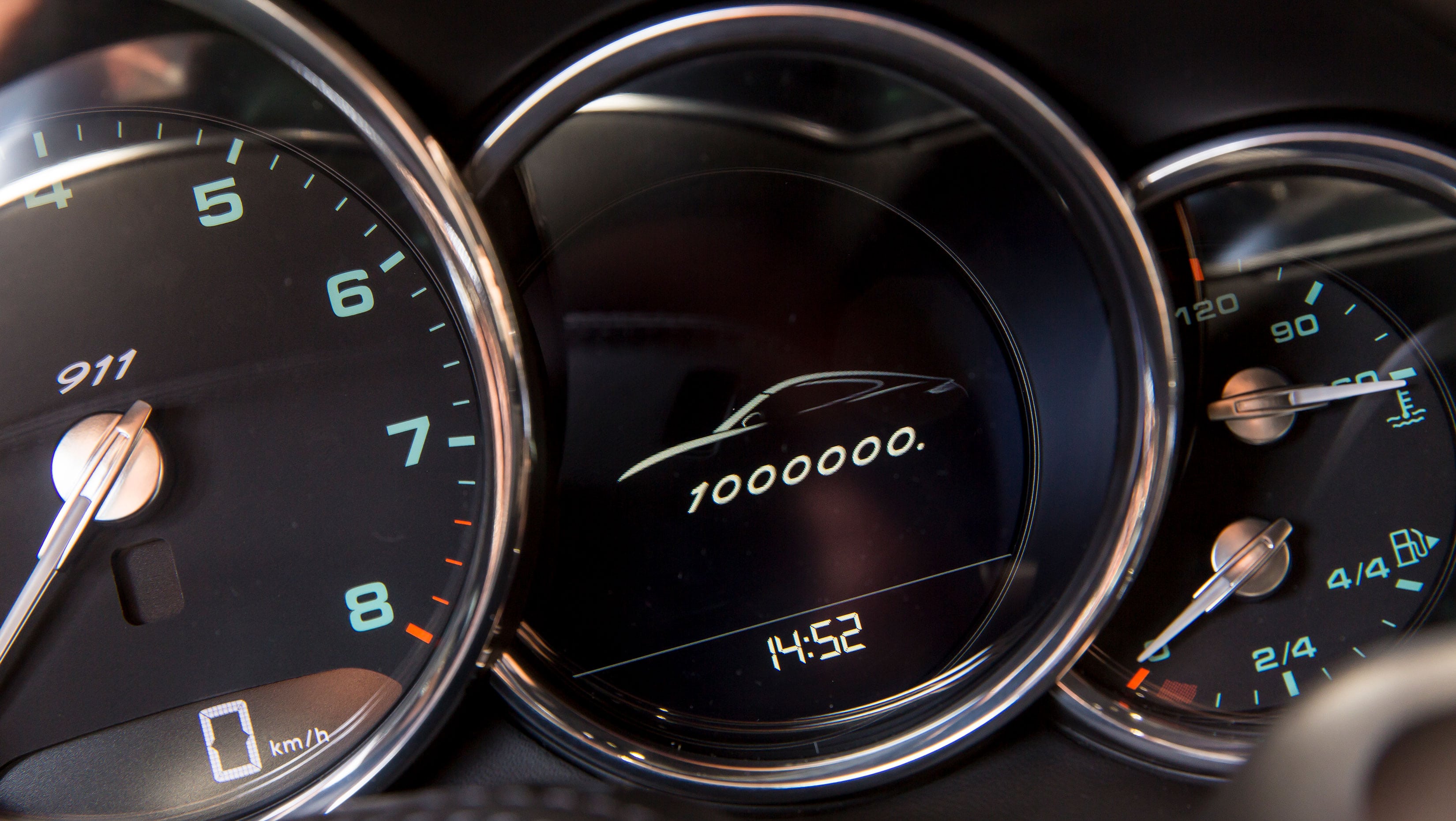 The secret to the success of the Porsche 911 has been much discussed. More than 300 books have been written on the subject, with new titles being added each year. The answer is actually quite simple: the Porsche 911 is unique in the automotive world. Like no other vehicle, it combines apparent opposites such as sportiness and everyday usability, tradition and innovation, exclusivity and social acceptance, design and functionality. Ferry Porsche described the exceptional versatility of his masterpiece to a tee: “The 911 is the only car that you can drive from an African safari to Le Mans, then to the theatre and onto the streets of New York.” 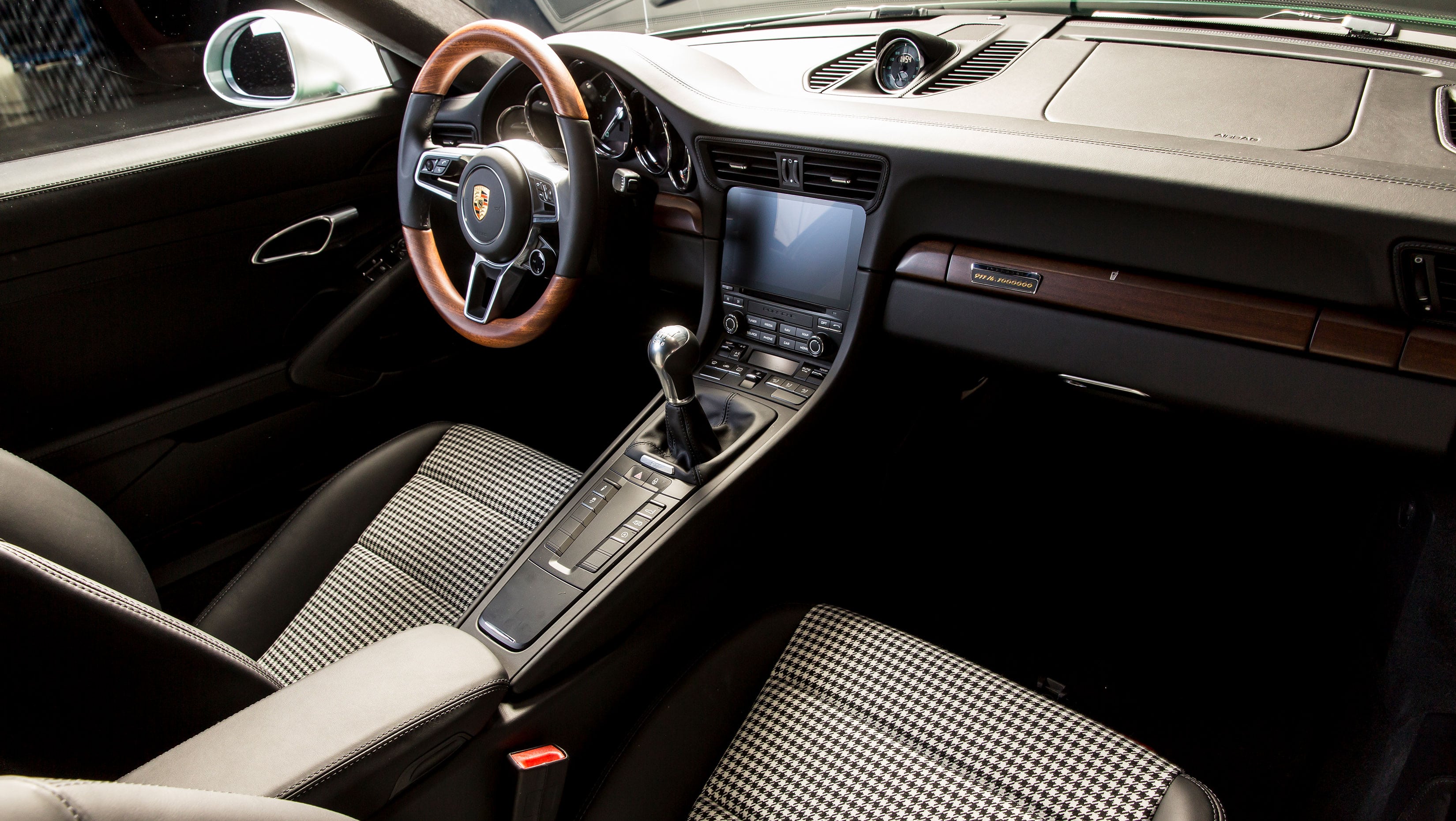 Blueprint of a best seller: How the 911 came about

The Porsche 911 did not have an easy legacy to fulfill. After all, by the beginning of the 1960s, its predecessor, the 356, was already a legend against which the new sports car had to be measured. The aim of the 911 was to continue the success of the 356, of which almost 78,000 units were sold, whilst featuring state-of-the-art technology or, even better, being ahead of its time. And it was to be bigger, so it could accommodate a golf bag in the luggage compartment as well as having a 2 + 2 interior concept.

The Porsche engineers therefore ventured to come up with a new design, and in so doing created the basis for the success that was to come. The frame and chassis of the 901, the internal type number, were completely redesigned. To incorporate the luggage compartment, the car was fitted with space-saving MacPherson suspension at the front and semi-trailing arm suspension at the rear.

Generations of the Porsche 911

When it came to designing the engine, it was clear from the outset that the successor to the 356 should have a rear engine. Ferdinand Piëch, the nephew of Ferry Porsche, oversaw the development of an air-cooled six-cylinder flat engine with axial fan and, due to the higher speed reserves and improved engine smoothness, a top-mounted camshaft on each side. The camshaft was driven by chains, after the use of vertical shafts and toothed belts was dropped. The initial displacement was 2 litres, with a possible increase to up to 2.7 litres planned from the start. This type of engine was continued in its basic form until 1998 and eventually featured 3.8 litre displacement. 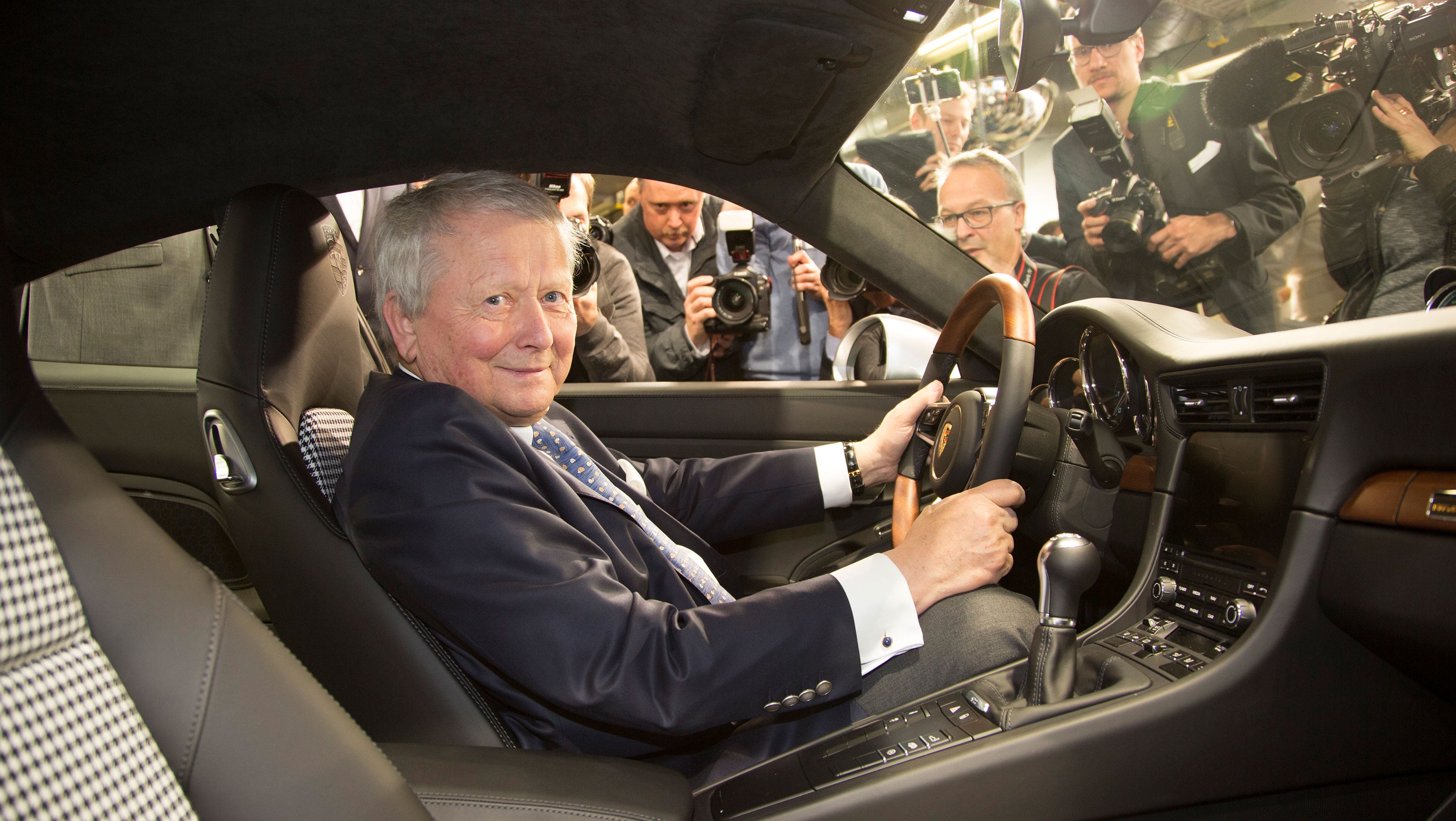 The design of the 911: The shining hour of automotive design

An important aspect of the 911 legend is, without doubt, the timeless design of the series. A Porsche 911 is immediately recognizable from every perspective and can be identified without the Porsche crest or nameplate. However, during the early development phase, there was a great deal of uncertainty at Porsche about the design of the future successor to the 356. Only after several internal and external studies did Ferry Porsche’s 27-year old son Ferdinand Alexander complete his historic design.

F.A. Porsche, as he was called by his colleagues, joined the design office of what was then Dr. Ing. h.c. F. Porsche KG in 1958. He was soon able to prove his vast creative talent when, in 1959, he sculpted a pioneering model of a successor to the 356 series out of plasticine. In 1959, the 754 “T7” prototype was created based on his designs. It was an extremely promising study of a four-seater car, however its rear end did not yet meet with Ferry Porsche’s approval. He decided against developing the four-seater “T7” in favour of the “T8”, a fastback coupé with 2+2 seating arrangement that was developed from 1962 onwards under the project name “Type 901”.

In the early 1960s, the emotional yet functional shape united automotive and product design for the first time – the two had been kept strictly separate in the design world until this point. In the original 911, F.A. Porsche distilled the Porsche design DNA into a concentrated masterpiece. He created an unmistakable brand design that, to this day, still gives all Porsche series their identity and forms the basis for their success. 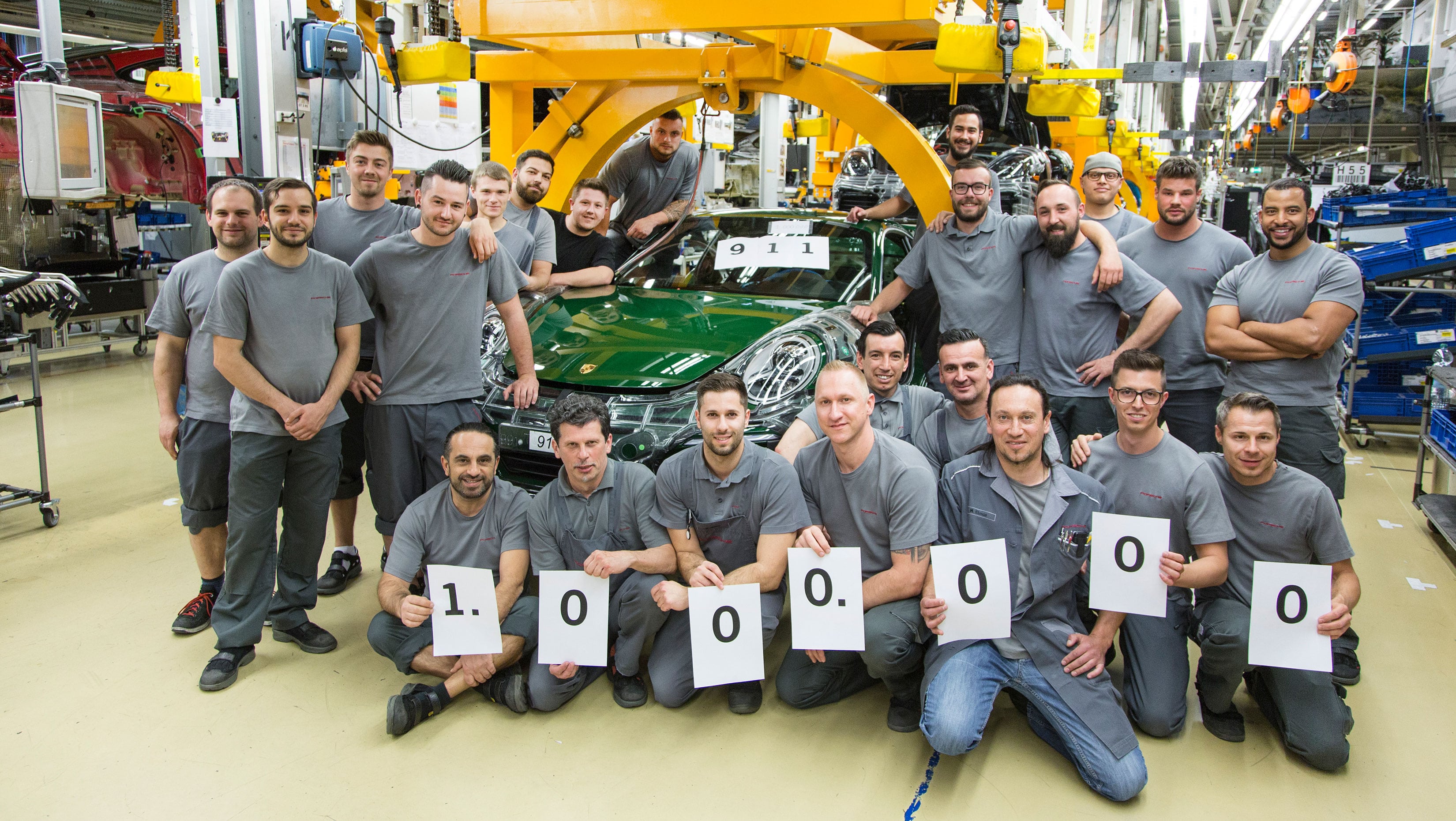 When naming the new model, Porsche first used Volkswagen’s range of spare part numbers as a guide. Because a possible collaboration with the VW plant was in the pipeline, it was thought that the new Porsche should already be compatible with VW’s number ranges. As the 900 numbers were not yet in use in Wolfsburg, it was decided in Zuffenhausen to name the project 901 for the six-cylinder variant and 902 for a later four-cylinder variant. The big day finally arrived on September 12, 1963 when Porsche presented the prototype of the 901 at the International Motor Show in Frankfurt/Main; the market launch was planned for one year later. 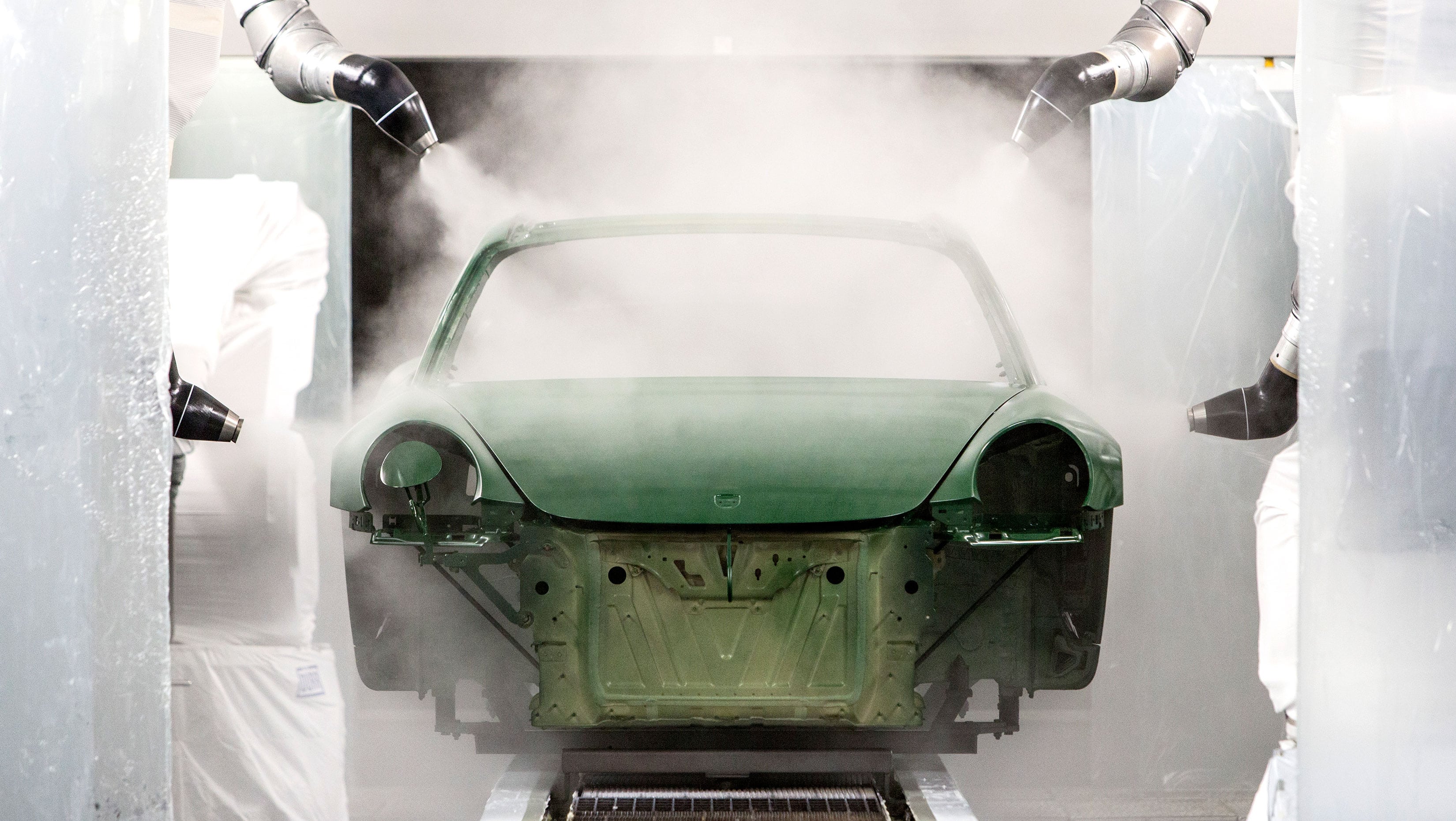 However, in early October 1964, the Porsche management team received an objection from the French car manufacturer Peugeot, indicating that the 901 type designation was an infringement of French copyright and trademark protection. Peugeot claimed it had been using three-digit numerical sequences with a zero in the middle since 1929, and therefore owned the legal rights to all similar number sequences in France.

Porsche therefore had no choice but to rename the 901 right in the middle of the model launch phase. After considering many different options, including using an affix such as “GT”, Ferry Porsche decided to rename the vehicle Type 911 on November 22, 1964. The reason for this was entirely pragmatic: brochures, price lists and driver’s manuals, as well as the type designation on the rear end and glove compartment cover, were already being finalized, and so the double use of the existing font for “One” was the easiest solution. There was simply no time to produce a new number font or new name lettering. No one could have known in 1964 that this on-the-fly emergency solution would produce the world famous “nine-eleven”. 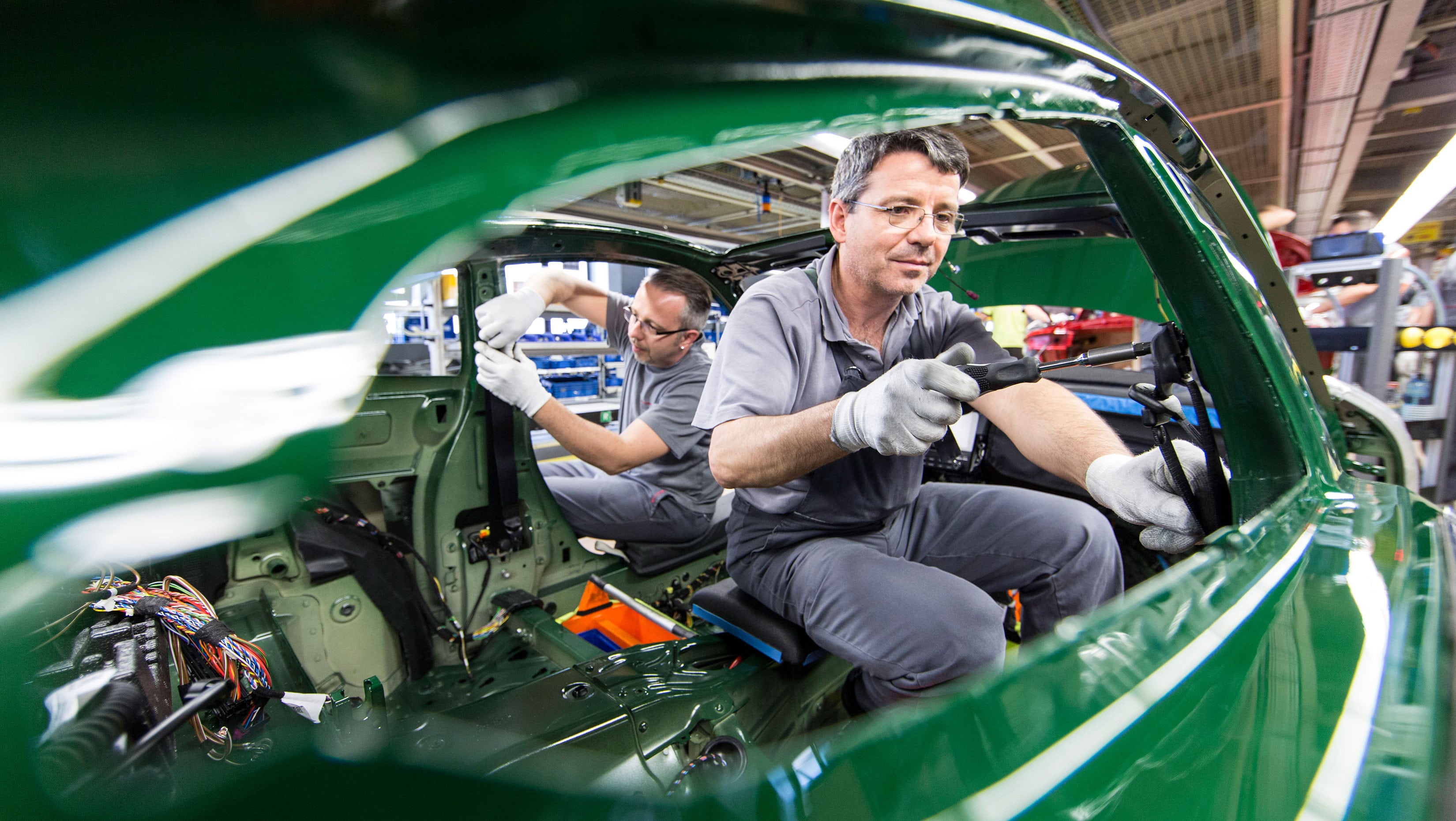 The Porsche 911 has been regarded as an automotive icon and sports car par excellence for over five decades. Now, the modern classic has celebrated its production anniversary.

It is without doubt the quintessential sports car for everyday driving, and a style icon that is unmistakable as both the face and heart of the Porsche brand: the 911. In Zuffenhausen on May 11th 2017, the one-millionth model rolled off the production line, celebrated by the assembly team, management and invited guests – a Carrera S in the special color “Irish Green,” with numerous exclusive features following the original 911 from 1963. The two-door car remains the most important model in the product range and is key in helping Porsche maintain its position as one of the most prestigious car manufacturers in the world.

Dr. Wolfgang Porsche, Chairman of the Supervisory Board of Porsche AG, has been a part of the development of the 911 since day one: “54 years ago, I was able to take my first trips over the Grossglockner High Alpine Road with my father. The feeling of being in a 911 is just as enjoyable now as it was then. That’s because the 911 has ensured that the core values of our brand are as visionary today as they were in the first Porsche 356/1 from 1948.” 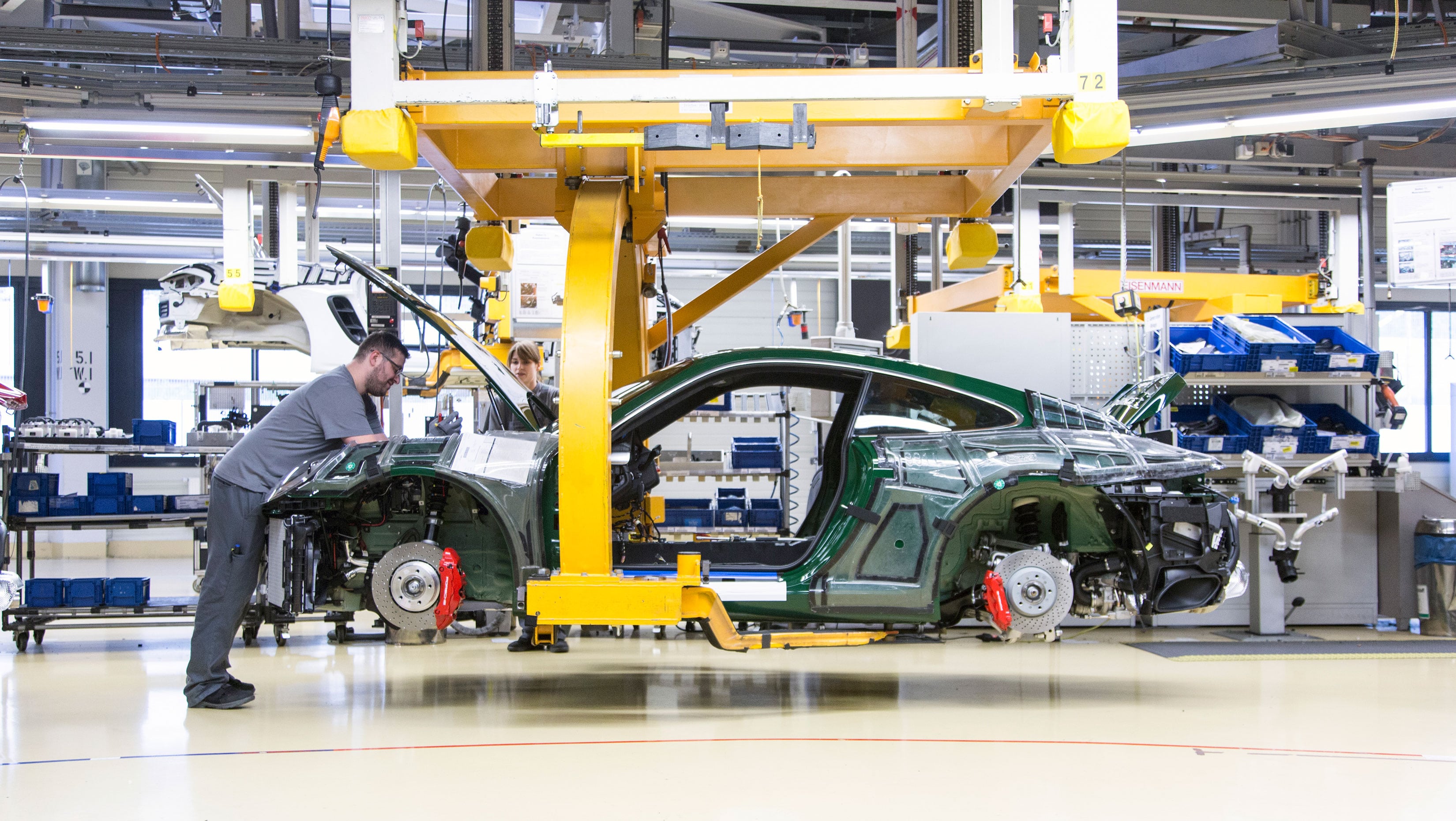 The Porsche 911 established a new category and remains at the pinnacle of the premium sports car segment. In 2016 alone, 32,365 vehicles were delivered worldwide – more than ever before. Nevertheless, it has maintained its exclusivity over the decades and has become a coveted collector’s item. The quality of the 911 and Porsche vehicles in general, is legendary. Over 70 percent of all Porsche cars ever built are still ready to drive today. In addition, the Porsche 911 can consistently be found at the top of quality rankings such as the “Initial Quality Study” from the U.S. market research institute J.D. Power.

The mythology of the Porsche 911 has been cultivated by countless motorsport successes. No other sports car embodies this recipe for success quite like the 911. More than half of Porsche’s over 30,000 race wins can be credited to the iconic car, and it still thrills private motorsport enthusiasts around the world in numerous racing series. 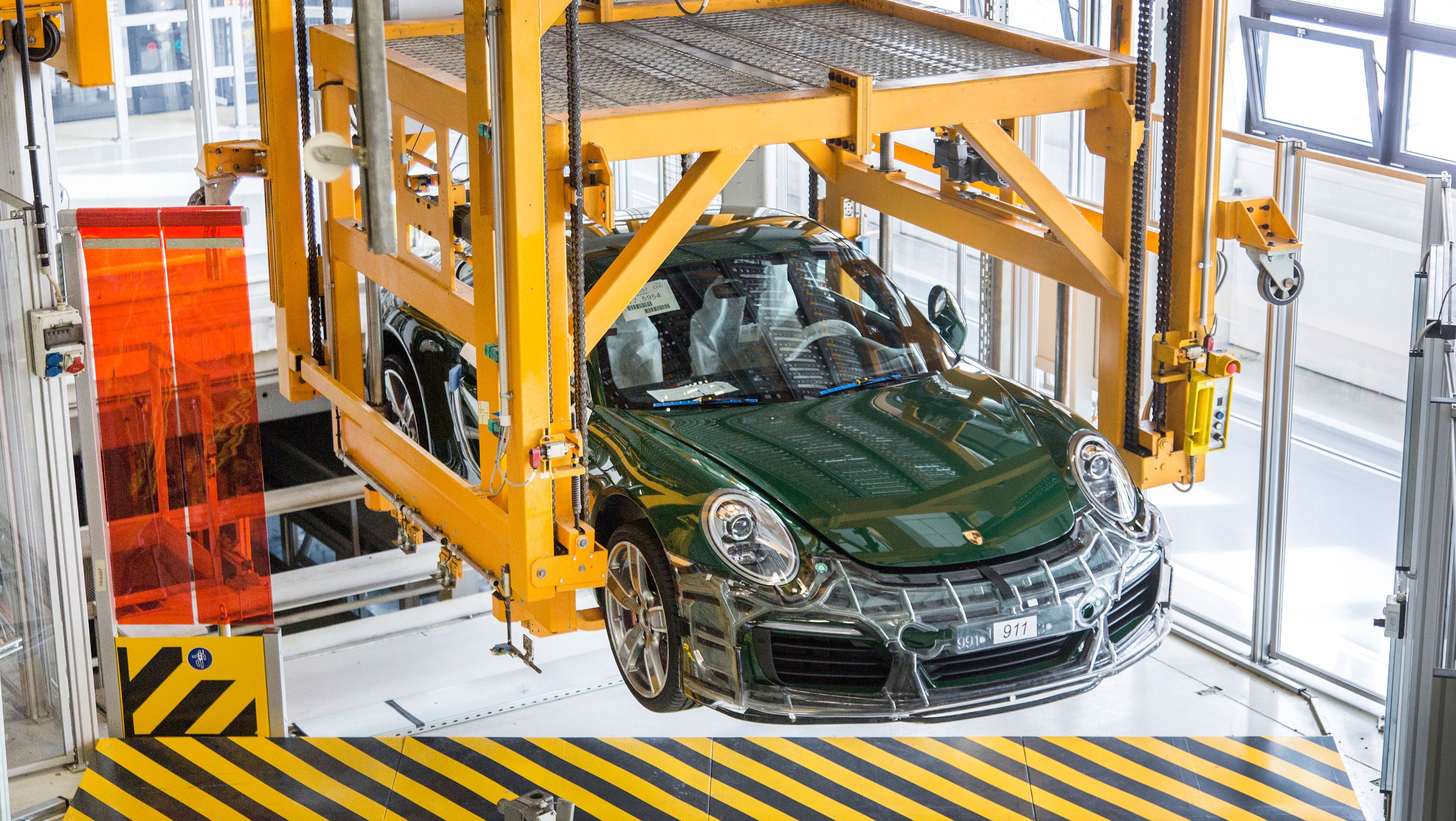 Porsche has never strayed from the founding concept of the original 911. “But we have continued to enhance the technology of the 911, refining and perfecting the sports car,” says Oliver Blume, Chairman of the Executive Board of Porsche AG, “that’s why it remains a state-of-the-art and technically innovative vehicle. We have also been able to expand the model line very successfully through derivatives.”

One significant factor in this success is the production site at the headquarters in Zuffenhausen, where all 911s ever built have been manufactured. Today, all two-door cars—911, 718 Boxster, and 718 Cayman—and their various derivatives are handled on one assembly line thanks to a sophisticated production approach. The assembly workers are experts in up to 200 different tasks and, with their passion and knowledge, they ensure that each Porsche is delivered with the quality typical of the brand. Uwe Hück, Chair of the Group Works Council of Porsche, says: “I cannot imagine the success story of the 911 without our unique Porsche employees. Today, we have the one-millionth 911. The good thing about it is that our colleagues still make them with the same devotion as the first car. The construction of the Mission E at the Zuffenhausen site is ringing in a new era at Porsche. And it is clear that if we are to make it a success, we will need our highly qualified and motivated employees. They will make sure that the Mission E is an emotional experience just like our 911 has always been—and always will be.”

The one-millionth 911 will not be sold. Before it moves on to enrich the collection at the Porsche Museum, it will embark on a world tour and will take road trips around the world, starting with of course, the Nürburgring and hopefully to Canada, before moving to USA, China, and beyond.

Provinz: May Social – UCR Gives Back