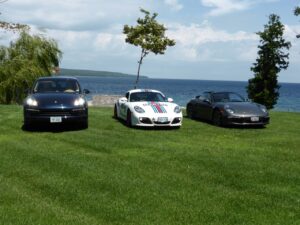 My introduction to the Porsche marque really occurred at the 1975 London Motor Show, the year that the 911 Turbo was launched. As a penniless student the introduction was strictly in the form of window shopping. Fast forward 35 years and I finally purchased my first Porsche sports car, a new Cayman S with PDK, a pale leather interior and burgundy metallic paint. I loved it for its neutral handling, sound and the revolutionary gearbox. Having grown up on a diet of European manual gearboxes I missed heel and toe shifts not one bit.

The Cayman had me hooked on the Porsche way of delivering a car that was loaded with that indefinable feel-good factor. So much so that the following year I made my only mistake in my Porsche-buying history.

Yes, I went the whole hog and purchased a new 997 Turbo S. That car was stunningly quick and I soon realized that the prodigious performance could not really be safely explored on the road. Which led inevitably to membership of the PCA and my entry into track events.

It was a pretty scary car in which to start my DE career but there was no doubt it could out drag anything up the back straight at Mosport. Unfortunately that car is a bit of a pig when it comes to wresting it around the twisty bits and I soon found that closely monitoring tire pressures was absolutely critical to handling.

The following year my wife and I toured Germany in a 991 Carrera S with Fast Lane Travel. In little over a week we covered well over 3,000 very spirited kilometres in absolute comfort; the step up in dynamics and comfort over the 997 was dramatic. As my wife would so easily get travel sick in the Turbo, upon our return ‘my’ 997 became ‘our’ 991. Ah, but there is a really good side to the story and that was the purchase of a two year old Cayman S PDK for track duty. I had to search around but eventually I found one with low miles and, more importantly, LSD – a rare item on the PDK cars.

That car has been campaigned by me for three years now and does not resemble at all the plain white Cayman she once was. If you ever go to the track you will probably have seen her or maybe read some of my articles concerning our adventures in Provinz.

Yes, she became Miss Martini and in the time I’ve had her there have been a few modifications made. Well if I’m honest there are not too many original parts that remain other than the climate control. She may be going Club Racing this year but the weight reduction program stops at removing the AC. That comes out over my cold dead body!

ARE YOU A PORSCHE-PHILE?
Join in our member profile page!
If you’d like to be profiled on this page,
please contact Porsche-Phile editor,
Rhonda Roberts at rhonda@invitalityliving.com.

Previous articleWinter is red – Tracking in Florida
Next article944 CORNER – 944 – An appreciating classic?

Never Too Old to Try Something New

In Memory of John Toth