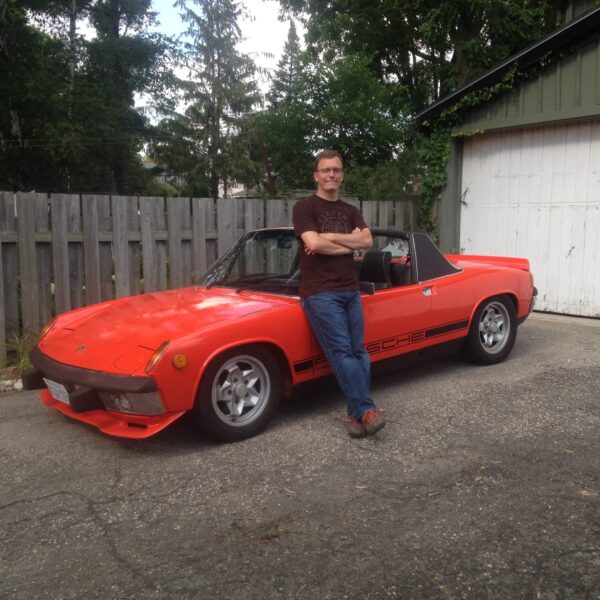 I first fell in love with 914’s as a little kid. I would walk down to my grandparents’ house a couple blocks away and right in the middle of the trip was an old dark grey 914 that had been growing into the driveway for years. I remember staring at it every time I would walk home from school or walk to my grandparents’ house always thinking that THIS was what I would drive when I grew up. I (poorly) drew pictures of it, 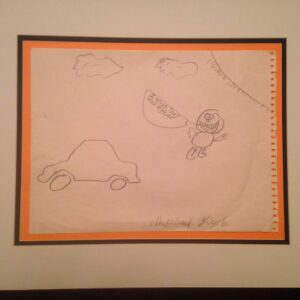 I mailed away for parts catalogues (this was before the ‘net), and looked for books at the library that had anything to do with 914’s. As I got into my teenage years, with the 914 down the street still growing into the driveway, I learned more about cars, mostly from helping my grandfather work on his 1929 Dodge, and watching open wheel and Le Mans racing with my dad every weekend. There were lots of pictures and articles and books on 911’s, but not much on 914’s. They were different from the rest of the Porsche world. Which for a teenager that just wanted to be different, it was perfect. Once I was 16, I tried my best to talk the owner into selling me the 914, but he said he was going work on it some day. It disappeared a while later and I never saw it again.

After years of keeping 914’s in the back of my head through marrying my high school sweetheart, buying a house and having kids, I stumbled upon a Kijiji ad for a 914 that was for sale less than 1 km from our house and I started talking to my wife about getting a project car. She knew from my going on and on about 914’s when we were younger that this was really big for me and she was completely on board. I already had experience in metal stamping and machining as I used to volunteer at the Canadian Warplane Heritage Museum in Hamilton restoring an old WW2 bomber, and I work at an auto assembly plant, but this car was going to be a BIG project for sure. So after a drive around the block, I fell in love again and bought it. It almost folded in half when I brought it home. I found expanding foam and roofing tar in the frame rails. But while the body was shot, I didn’t care, I was in love, and since everything on the car worked, including the 2.0 L engine, it would be ok for parts. After having a few chats with the guys at Restoration Design in Guelph, I ended up getting a second bare 914 chassis that was in better shape and started the restoration. 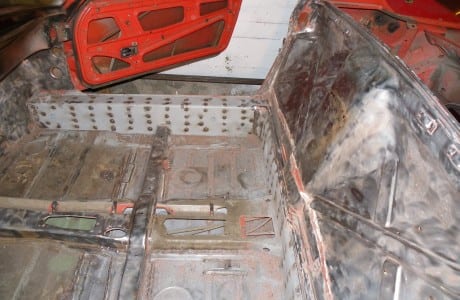 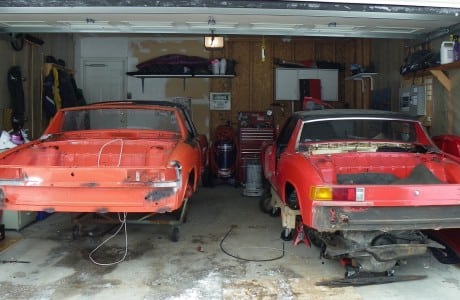 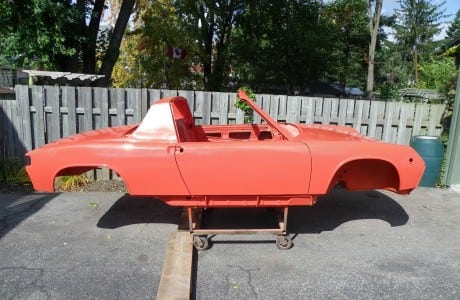 I was determined to do EVERYTHING for the restoration myself. I worked on my welding technique and sheetmetal fabrication. I welded in new trunk and floor pans, chassis stiffeners and a few smaller patches here and there to get rid of the rust. I also tried doing the finish bodywork and painting, which I learned is not my forte. I scoured the Internet and 914world.com for more parts and help along the way. I rebuilt or replaced all the suspension, brakes, lines, etc. I even learned how to rebuild the old 901 transmission. My kids would come out to the garage and help hold the multi-meter or bolt on the steering wheel for me and loved coming out to work on daddy’s car on Sunday afternoons. 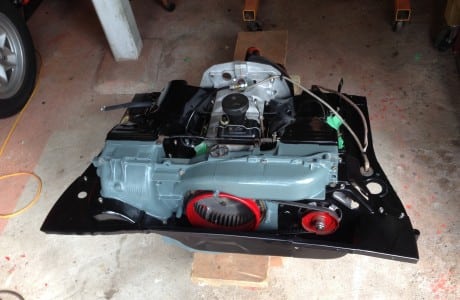 As for the engine, I had tossed around the idea of putting a 6 cylinder into her but, the more I thought of it, the more I wanted this car to stay different. I wanted people to hear the engine and ask, “ what the heck is that “. So with a few great deals falling into my lap, I built a big 2316 cc 4 cylinder motor that only retained the timing gear as a stock component. It grumbles through the headers when it idles and really comes alive in such a tiny car once it gets up over 3000 rpm. Now that she’s on the road, there are still things I can tinker on and a list of “maybe I’ll get one of those for the car“. Maybe someday I’ll get her a better paint job too. But, when I drive her, you can’t wipe the grin off my face with a baseball bat. She corners like she’s on rails, stops on a dime and could very easily get me into trouble if I push the skinny pedal too much. She’s definitely dif­ferent. Just as I daydreamed years ago!

ARE YOU A PORSCHE-PHILE?  Join in our member profile page! If you’d like to be profiled on this page, please contact Porsche-Phile editor, Rhonda Roberts at rhonda@invitalityliving.com.

NOVEMBER SOCIAL – After a Collision—What you need to know