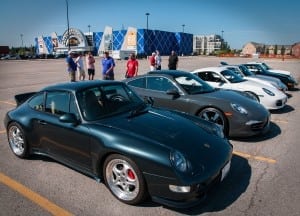 In December 2012, I got Provinz in the mail. Like I do every time it arrives, I sat down and read it through. I remember an article written by James King entitled, “Porsche Group 905”. They met every month (the 4th Sunday) at a Second Cup in Aurora! What a great idea! Aurora’s not too far I thought (living just north of Barrie), “I’ve got to get out there!”.

Then life happened, you know, and it was May of 2013 by the time I finally got out to Aurora for the monthly Porsche Group 905 meet.

There were only four of us PCA UCR members there – Barry Wiseman, Helmuth Vorkoetter, Will Chiu and me. We got to talk like…well, car guys… like car guys that have known each other for some time.

These three told how they, and James King, met at the UCR Social event (at Edward St. Market & Bistro, Yonge St., Aurora) on April 10, 2012. James King voiced a desire for a Porsche Cars & Coffee meet for those north of Toronto. All other meets seemed to be Toronto-centric and the roads north of the city were more Porsche friendly.

The first Porsche Group 905 meet occurred at Starbuck’s (just one light south of the meet’s current location). Too busy, too congested, not enough parking. Barry suggested Zavida’s Coffee. Not too busy, very open, ample parking…perfect! Zavida’s was subsequently taken over by Second Cup.

Sadly… they told me that James King had passed away over the winter. We all decided we wanted James’ idea to come to fruition. I would get the “word” out via the UCR website and other forums, and we would tell anyone who’d listen.

Well, word got out and James’ idea has taken root and prospered. On nice summer days we have great turnouts with a wide variety of Porsches. Attendees are now clamouring for this to be a weekly event, with drives and lunch stops occasionally!

Starting September, we’re thinking about having this Porsche Group 905 Cars & Coffee meet twice a month in Aurora… on the 2nd AND 4th Sunday every month. Lets see how it goes. Come join us, for an hour or two of interesting conversations about our cars or anything that interests you or nothing at all! Order your favorite and pay for your own.

Anyone elsewhere in and around the 905 perimeter can set-up similar events around the GTA in memory of James King, a true Porschephile.

Thanks, James…I’m sure you’d be pleased with your Cars & Coffee event drawing Phorschephiles together every month! 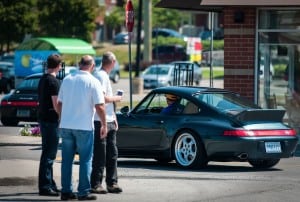 If you’d like to be profiled on this page, please contact
Porsche-Phile editor, Rhonda Roberts at rhonda@invitalityliving.com .

Pounce! Getting Back on Track

Getting the Most Out of Your Membership 2013