THE PORSCHEPHILE: What a Surprise – A Birthday Porsche! 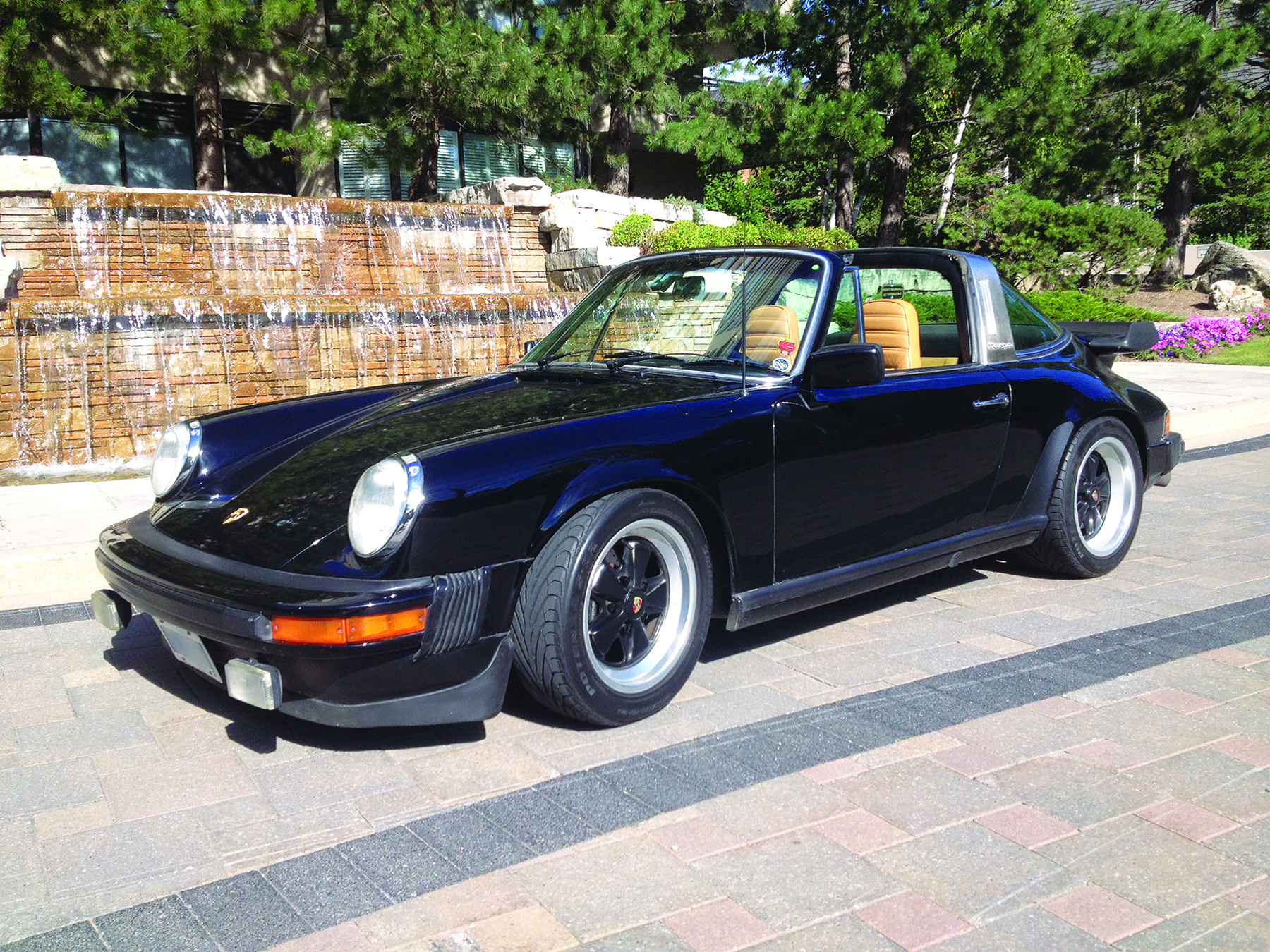 As a lover of fine automobiles, I appreciate the sound, style, and history of Porsche. In fact, my passion for the marque goes back to the early ‘50s, when, during the early days of racing at the Edenvale Aerodrome, north of Toronto, my Dad and I would watch and marvel at the profusion of Jags, Healeys and MG sports cars—but I soon realized nothing else stirred me quite like the progression of Porsches that so often headed the racing pack. Later, at the then-new Mosport Park, Porsche continued to provide stunning results, often against far bigger and more power­ful opponents.

In my early teens, knowing our family would never own a Porsche, and never imagining I would ever own one, there seemed to be only one solution: I’d build a reasonable facsimile of one. Using winnings from a local Rotary bike riding and safety competition, and with help from my dad, I bought a $45 air-cooled Briggs and Stratton motor and set to work. I persevered and in time, with four shiny new wheels on a bed-frame chassis and my engine in the rear (like my dream car) but no muffler, I donned my helmet and raced around a dirt track made with friends behind our Barrie home. 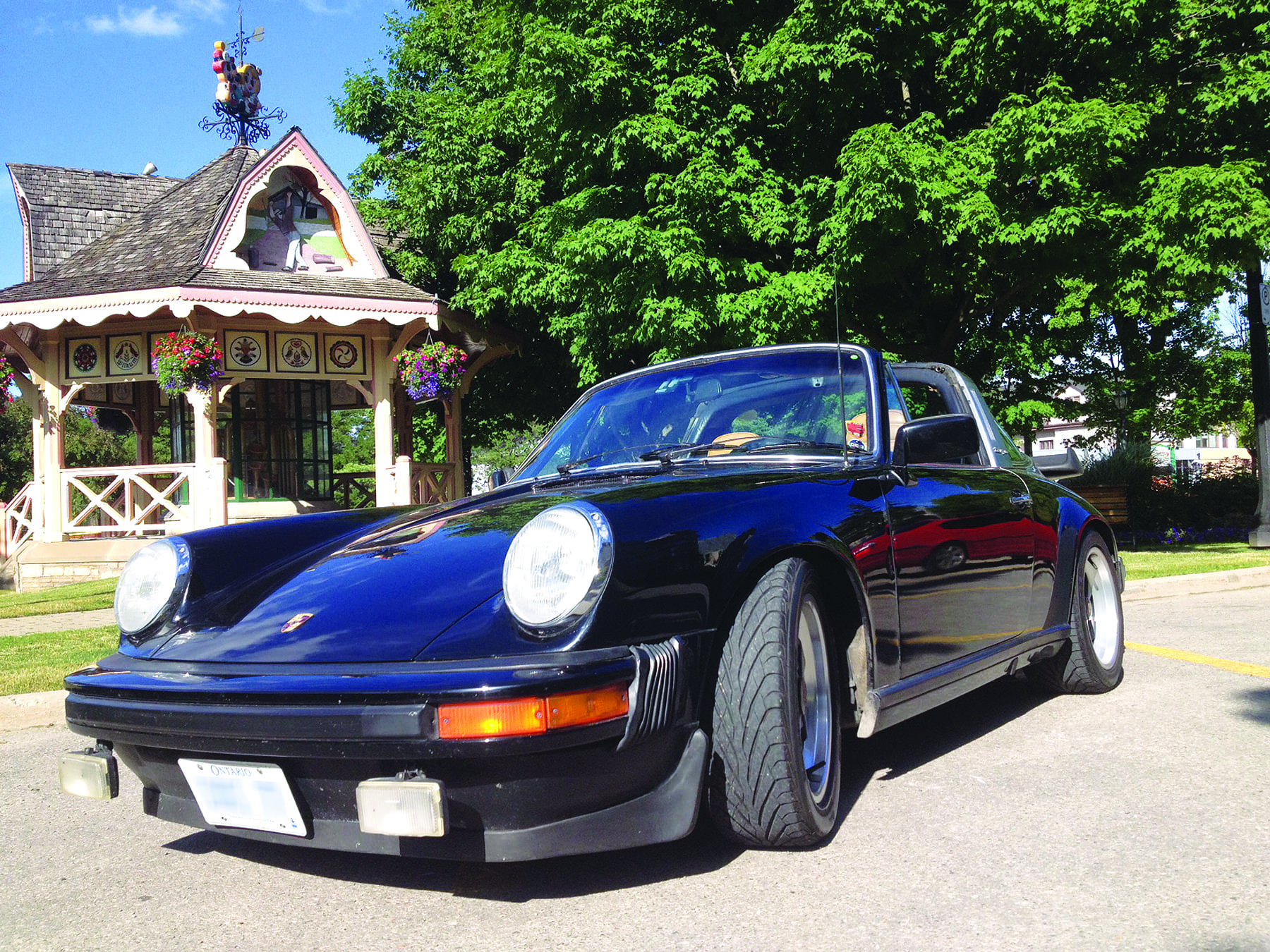 On bright sunny days, I’d venture onto a nearby dead-end street and take friends for crazy rides in my ‘pretend’ black Porsche. For the special girls, I’d let them drive. What fun that was! I heard about an upcoming event for homemade karts, scheduled between the main stock car races at Pine Crest Speedway. A buddy and I went, with no expectations of winning, just the thrill of competing. We had “Porsche-like” handling, but lacked power and speed. We came third in the field of five and felt like we’d won Daytona! And yes, there were some wonderful cars in the parking lots at those races—Porsche, though rare at the time, could always be seen and admired.

Time moved along and so did my sightings of Porsches at car shows, races, and rallies. I owned a variety of fun cars, though never a Porsche! My dream car briefly came into my life… my university buddy bought a magnificent used Porsche 356 convertible! Dave was generous but oh, how he protected that sweet silver Speedster! I’ve often wondered whatever became of that car which I’d once so admired.

Marriage, children, career, etc. did not set the stage for owning a Porsche but I read and collected many Porsche magazines articles, and scale models of Porsches adorned my library shelves. My dear wife became interested in Porsches through osmosis and our youngest son seems to have inherited the “Porsche gene”— like me, he loved to read about and study the endless Porsche progressions. Our family’s visit to the Porsche museum in Germany was as anticipated as a trip to Disney World!

As my 70th birthday loomed, little did I know what was in store for me. My wife thought that if the money side of things could be arranged in secret from me, maybe, just maybe, a Porsche could be in “our” future! She established some goals that only our eldest son knew about, and with his help, hoped to find an appropriate Porsche. He contacted an office colleague who regularly surfs the internet for antiques and who happens to be a car nut. In the following weeks, after locating a few in-budget candidates in the US, he found a stunning black 911 Targa locally. The owner had carefully maintained the car, and had always stored it in his garage. 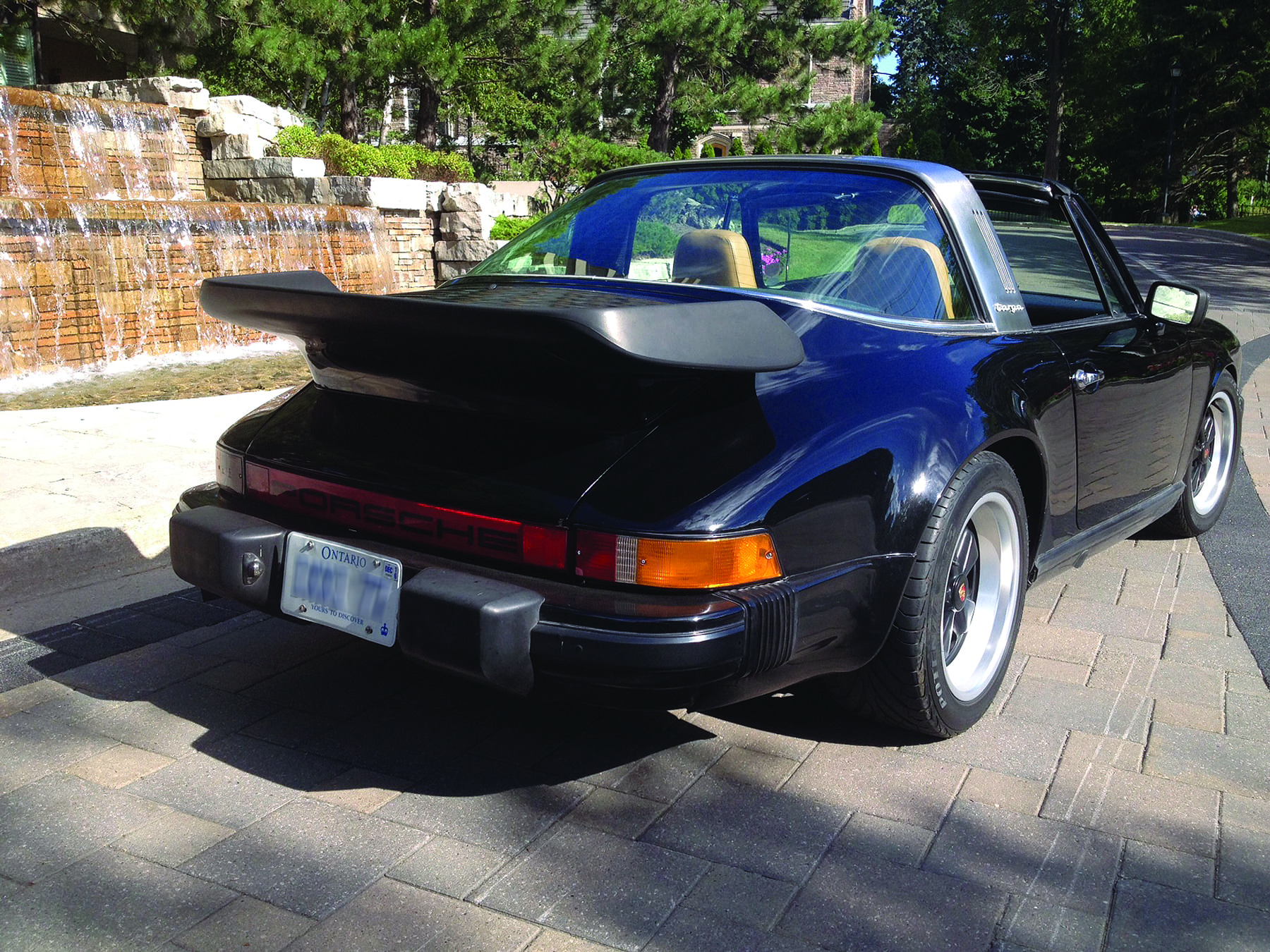 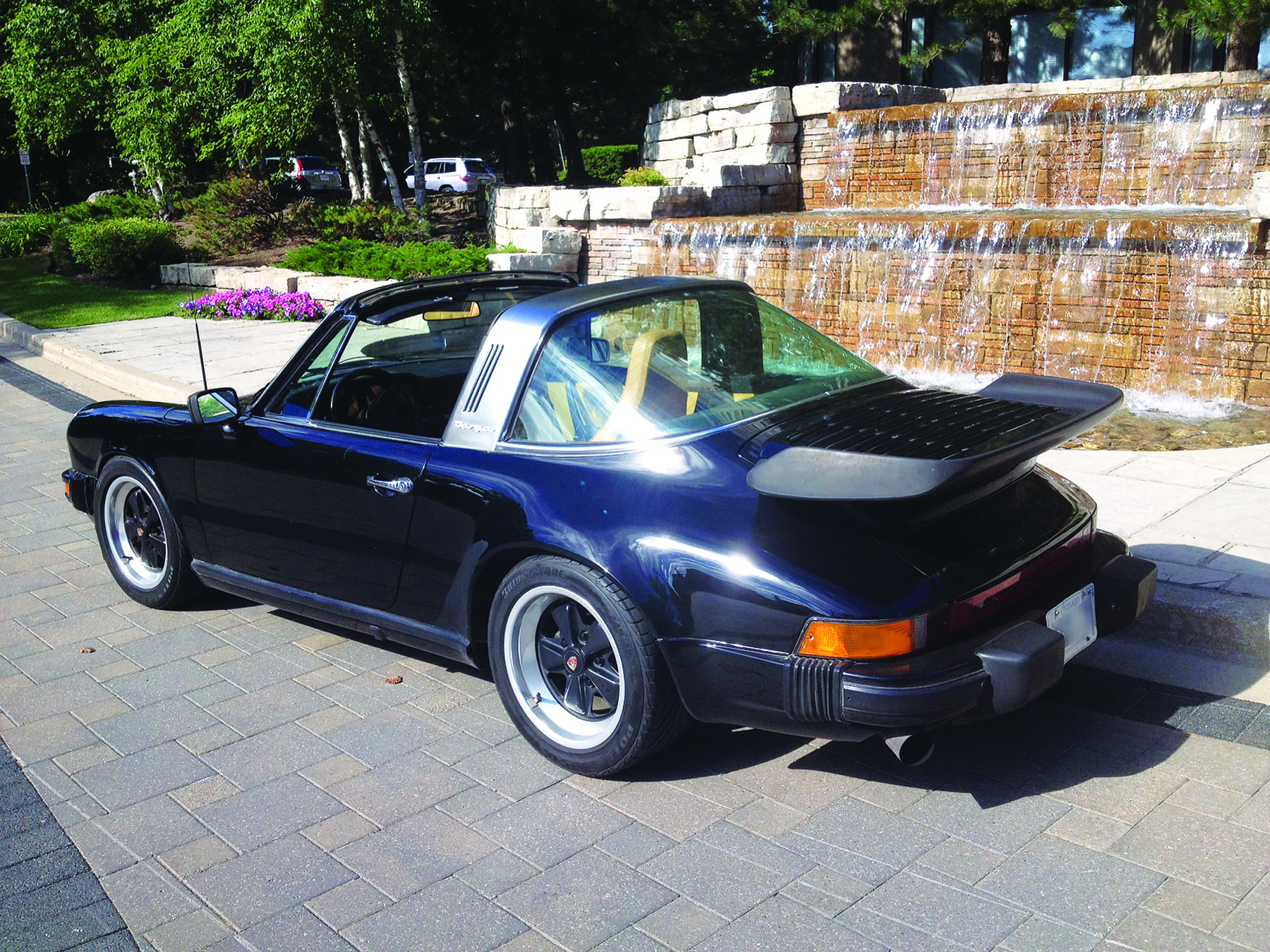 The car was purchased in a secret arrangement between my wife, eldest son, and the owner. As one would expect, there were some trying moments and close calls in pulling this off right under my nose. My son’s trips to the insurance company and the license bureau are stories unto them­selves!

The whole family gathered one day in Burlington for an early birthday celebration, involving a wonderful lakeside luncheon. As we strolled through the restaurant parking lot, I noticed a beautiful Porsche 911 and made the comment, “Now one of those would look great in our driveway!” Such phrases have been made a hundred times over the years, but this time unknowingly, it caused my wife great anxiety. “Did someone tell him? How did he know? Who told him?”

I most certainly did not know—or even suspect a thing! We all then went on to our son and daughter-in-law’s home. I played with the grandchildren and then gift time arrived. One card said something about “your dream car” but in the confusion and excitement of the moment, I didn’t grasp its meaning. Even when I opened the accompanying little box and picked from it a set of keys, I simply could not fathom what was happening.

My eldest son then disappeared, only to return a few mo­ments later with a request for me to look out the front door. We all went to the opened door and, “Oh my gosh! What is this? Whose car is that? Is it a rental? No? Is this for real?”

As the reality of what was happening sunk in, I could no longer even see the shining 1977 black Targa with tan interior, let alone driven it at that moment—my eyes were filled with joyous tears. We were all overcome with joy.

After we regained composure, we inspected the amazing birthday pres­ent—then both sons, our daughter and the birthday boy took turns driv­ing it around the loop in front of the house, and past the neighbour’s garage where it had been graciously stored since purchase. Round and round we went, oh, what a sound! It was the most wonderful few hours and my wife and son were justifiably proud of themselves for having created and executed this fantastic birthday surprise. Hugs and kisses for them both were hardly enough!

As part of the deal, I met for coffee with the previous owner so he could be assured that I’d cherish his beloved car and treat it as he had done, for so many years. The car continues to provide many hours of driving pleasure and is regularly taken to Show and Shine events. Our colleague who’d found the car drove it with his new bride on their wedding day, waving goodbye to their happy guests. There’s also the joy of driving it to (the now) Canadian Tire “Mo-sport” Park with my son and two grandsons to participate in the annual Porscheplatz event. The thrill of driving this pretty, black, rear-engined 911 around that wonderful track always brings back fond memories of driving my hand-built facsimile around my own little dirt track all those years ago. But nothing compares to the real thing!

Now into my fourth year of ownership, the fun of it all continues! Come to think of it, another significant birthday is creeping up, sooner than expected. Who knows what new birthday secret may be in the works? “Porsche has upgraded the 911 Targa, Dear. You know, the one we saw at the Detroit Auto Show?”