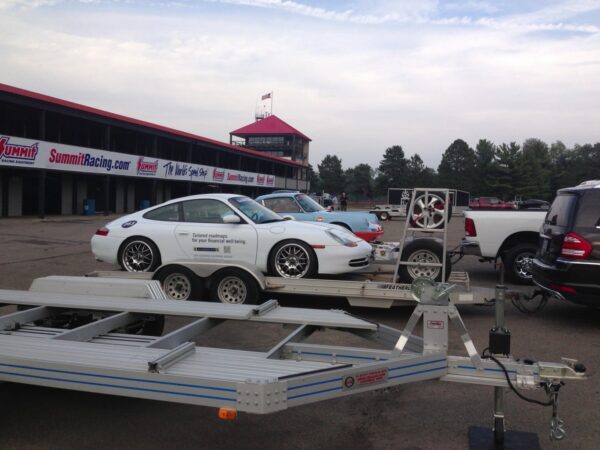 November marks the end of the 2013 lapping season; a perfect time to reflect. This has definitely been my busiest season since I got involved nine years ago. This year’s season began in June, with my successful completion of the PCA National DE Instructor course at CTMP.

After participating in the UCR’s and NNJR’s CTMP DE weekends, I set on my way to fulfill another lifelong dream: attending the 24 Hours of LeMans. A good friend of mine, Paul Dalla Lana, was a part of the race this year in the GT Pro category, driving the #98 Aston Martin. This only added to the sheer thrill of the event. Needless to say, it was an incredible experience and very different from any race I have been to. It was a once-in-a-lifetime chance to walk the cars onto the grid, have full pit garage access during stops, and be a part of a race that continues for 24 hours. Since I was wearing full team gear, a couple of times I was mistaken for an official team member–what an honour! When the marshal asked me the order for the drivers, I said Pedro Lamy was starting, with the third driver being Bill Auberlen. I later told a team member what I had done and was sternly admonished not to do that again. 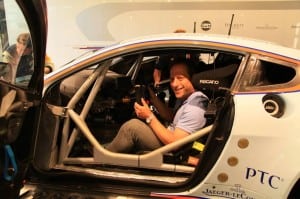 Paul’s Aston Martin suffered an engine failure, but his fate was far more fortunate than Alan Simonsen’s, who tragically perished when his car struck a concrete wall abutting an eucalyptus tree, six feet in diameter. Why there were no tires to cushion the severe impact remains a mystery. Despite this terrible tragedy, the first fatality at Le Mans since 1997, Simonsen’s family told the team to continue racing..

The 24 hour road race is strenuous and a test of endurance; you may have the fastest qualifying car, but you can break down or run inefficiently, requiring more frequent refuelling. These weaknesses are exposed and exploited over the 24 hour race. In contrast, the overall race-winning Audi LMP1 Diesel runs for 24 hours without breaking down and is incredibly efficient. As a portfolio manager, I can’t help but draw a parallel to the investment world. With an aggressive stock portfolio, you can have a good streak or momentum for a period of time, but if you lose a large amount of money due to a “drawdown” or selloff, you fall deeply behind your objective.

On my return from Le Mans, I attended the UCR Shannonville DE weekend as a first-time instructor. I had a great time teaching and driving with my first two students, but the weekend was memorable for a couple of other reasons. As the track at Shannonville is highly technical with many turns, I actually became nauseated sitting in the passenger seat; something I did not anticipate. Secondly, my 996 sprang an oil leak. Clearly, I have an intelligent car, choosing to fail me on my final lap on Sunday afternoon. Fortunately, the leak was easily resolved with a minor flange seal replacement. A third, and perhaps the biggest, take-away from that weekend was the outpouring of kindness and compassion from our UCR group. Just about everyone in attendance offered to drive me home. The kindness of two UCR members especially stands out: Brad Usherwood offered to put my car in his trailer and have me drive his gorgeous C4S back to Toronto (as tempting as the offer was, I had my car towed back). What they say is true:”It’s not the cars it’s the people.”

My continuing goal is to try a new track every season. Two years ago it was Le Circuit Mt. Tremblant, and last year was Watkins Glen. It was at the Glen that I met Chuck Price, an instructor from Ann Arbour, Michigan. Chuck was the NNJR instructor who agreed to show me the lines, and he also suggested I try Mid Ohio for this year. Based on my mechanical breakdown in Shannonville, and the 650km journey to Ohio, it seemed unavoidable that I needed to rent a trailer. Fortunately, Courtney Walsh, my auto technician, both sourced a trailer for me and ran through the many nuances of towing with me, including the ratchet system to hold the car down, the winch in case my car needed to be pulled on, and other details. Thankfully, on arrival at Mid Ohio, Chuck was there to help me unload the car;  Courtney’s instructions proved too much for me to retain.  Anyone who knows me is well aware that I’m no gearhead! Chuck had sent me an instructional video of Mid Ohio to help me prepare and I watched hours of footage of the track. 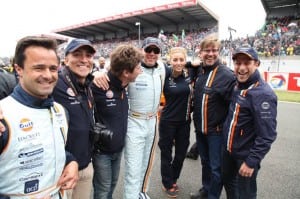 Friday morning, ARPCA arranged a parade lap as there were many experienced drivers who were at Mid Ohio for the first time. This was truly a first-class event. Chuck drove me around a few times, and then it was my turn to drive. With our microphones on, he talked me through a short run session–it’s not an easy track to learn. At the end of my first run, I was overwhelmed with a feeling of utter ineptitude that I have never experienced before. Suffice to say that turns seven through to 11 are known as madness; they are a group of esses with camber and elevation changes, on a track where precision is key. It took me most of Friday to feel comfortable.

Saturday challenged us with some rain. I (Chuck and his tools) changed my sport cups for street tires and dragged Chuck into my car to show me the rain line. The track is covered with sealant, slippery when dry and ice-like in the rain. One damp run session was enough for me. It continued to rain and I convinced Chuck to join me on a run to Sears. Since the spare wheels and street tires were recently purchased, I needed advice on buying the right impact gun and aluminum jack. Sunday stayed dry and I finally felt like I was driving to my ability–right when it was time to head home. As Chuck helped me load the car, we were handed BBQ’D hot dogs from our neighboring Porschephiles, who thought we might be hungry for lunch. What a group!

The most meaningful lesson learned on this journey came near the end. Thanks to my kind paddock neighbors, I had eaten lunch already and felt that the US$10 in my pocket was sufficient for the remaining bridge tolls, and off I went. As I was approaching Buffalo with only $2 left from the previous tolls, the Peace Bridge loomed ahead–I needed an ATM right away. My GPS said there were several ATMs nearby. I parked, ever fearful of having to reverse with my trailer, and started walking to the closest ATM. I suddenly realized I was drawing some unwanted attention. The area was barren, and mostly barred up. I was being trailed by a group of guys who popped out of a small green space near my parking spot. As I continued walking rapidly, there was no ATM in sight. Despite my rapid gait, I was acutely aware of being trailed.

My phone rang. It was my 10-year-old daughter, Lily. She decided to call at that moment because she was somehow worried about me. I quickly said hi and asked for my wife. I told her of my dangerous situation, and she sent an email to me with directions to an ATM at the Peace Bridge. Since I was so focused on keeping my iPhone concealed, I missed this very helpful piece of advice.

Hustling along for several blocks with the gang trailing in the distance, I spotted a police car. I desperately waved as it drove right by. While I sadly watched it leave, I noticed a lone bellman up the road. He directed me to an ATM in the hotel. With cash in pocket, I found an exit at the other end of the hotel and shook off my unwanted following. But once outside, I was completely disoriented. Dusk forming, lost, alone in the streets and at the height of panic, I spotted a landmark that caught my eye when driving in. I broke out into the fastest sprint I could and headed for the truck. I called my wife and told her I was safe and heading home. Winded from the stress and the sprint, I barely caught my breath before getting to the Peace Bridge. When the border guard asked if I was on my way home, with a sigh of relief, I said yes–little did he know how far I had come on the road from Le Mans to Mid Ohio.

Most Economical Porsche Ever 2011