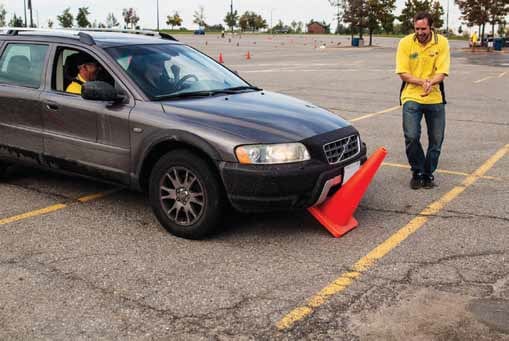 I found myself standing in front of a box of Tim Hortons coffee at some ungodly hour on an early autumn Sunday morning. Purgatory: a long line of Tim Hortons catering containers, with people shuffling from coffee to donut to tea to cruller, forever and ever and ever, until the last Nickelback-laden radiowave fades away to nothing at the edge of the universe, or in this case, the hockey arena.
But if you’ll allow me the metaphor, that beige box of black liquid was more than just cardboard, it was a testament to the dedication of the organizers and volunteers who carted in supplies and gave up what would have made for a glorious track day to set up a closed course of a different kind. Welcome to the BMW and Porsche Clubs’ Tire Rack Street Survival School–improving the safety of our roads and highways, one driver at a time.

But first, a tech inspection. Unlike other cushy driving schools where everything is Benzes, BMWs and Porsches and seven-course dinners, here you’re rolling in your own daily driver. This is by design, because over the course of eight hours, you’re going to become intimately familiar with your vehicle as you push it until it breaks (traction). The tech inspectors look under the hood, check tire pressure, and examine the interior for any potential problems. Green sticker means you’re good to go.
The morning kicked off with what is officially termed Wake ’n’ Brake, or as I’d call it The ABS Experience (coming soon to a Cineplex near you). Everyone’s heard of anti-lock brakes, but most drivers have never felt it in action. The first time you have to slam on the brakes and the system kicks in, the sudden noise, vibration or change in pedal response can become a devastating distraction in an already stressful situation. Solution? Try out the ABS in a controlled environment.
Here, drivers accelerate toward a 10-metre lane marked by pylons. A lone orange cone stands at the end of the lane. The object is to stop before you hit the cone. Too simple, right? Well, some of these guys were still yawning into their coffees and it wasn’t long before an M3 trampled one of the plastic stalwarts. Boy racer aspirations, meet reality.
Each driver got several tries on the course, attacking it with ever more velocity and confidence. Despite the parade of vehicles roaring down the asphalt at maximum throttle and stopping precariously close to the marker, there was a surprising lack of noise and drama. Which is, of course, the point of the exercise. You might expect Hollywoodstyle brake squeal or tires screeching to a halt, but ABS is designed to prevent skids and allow steering control under hard braking. Theatrics, unfortunately, are not part of the equation. (Also, they were only accelerating for three seconds and these were Camrys and Fits, not Aventadors or Hellcats.)
Twenty minutes later, the combination of g-forces and caffeine had done the trick–the crowd gathered inside was bright-eyed and bushy-tailed. Martin Tekela–Porsche Club member, Young Drivers of Canada instructor and our MC–introduced the staff and the day’s program. Students were divided into groups, with half returning to their vehicles for one-on-one instruction, and the other half taking to the classroom. Shortly before we broke up, the inspection crew came in and announced that a third of the vehicles in the parking lot had tires that were dangerously underinflated. A scary statistic, considering that these vehicles would otherwise be on the road, their drivers completely oblivious.
My group started in the classroom with Mario Marrello, autocross chair for the Porsche Club. And one of the first things we learned: ABS doesn’t reduce your braking distance. In fact, it can even increase it. But what it provides in return is control of your vehicle when you need it most.
The underlying assumption, he explained, is that your tires are up to the task. The contact patch, where each tire meets the ground, is roughly the size of the palm of your hand. Not a whole lot of surface area considering it’s your only interface with the road. Tire grip is affected by tread wear, weather, direction and velocity of travel, and, as mentioned by the techs, tire inflation. Loss of grip means loss of traction means loss of control means, in some cases, a crash.
Underinflation is particularly problematic because it opens up a host of possibilities: reduced responsiveness and stability, reduced fuel economy, and outright tire failure. In wet conditions, underinflated tires have a reduced ability to wick away water, leading to a greater chance of hydroplaning. Not something you’d want on a day when you’re doing slalom courses and running on skid pads. Or any day you’re on the road, really.
The three classroom sessions ran about 50 minutes each, structured around a slideshow coupled with a student handbook. The slides were simple and bite-sized, with Mario providing real-world examples and technical details for the curious or mechanically inclined. After each lesson, students headed out and had the material reinforced in their one-on-one sessions in the car.
Outside, there were four stations set up: Accident Avoidance, which was like the Wake n’ Brake exercise, this time with feeling steering, Cornering Skills, where students confronted a decreasing radius turn; Vision Skills, where students ran through a slalom; and the crowd-favourite Skid Pad–complete with dish detergent.

There was a recurring theme in all of these exercises: Look where you want to go, not where you don’t want to go. Don’t look at the tree or the oncoming car you’re about to hit; look at the path you’ll take to avoid it. Oversteer or understeer? Look in the direction you want to go and steer accordingly. Running a slalom? Don’t focus on the cone right in front of you; look further down the line. In a skid? Once again, look at where you want to go. (Given today’s safety equipment, starting the skid was the more difficult task. Though by day’s end, even the beige Camry got into the action with a completely immobile inside rear wheel.)
The coaches would describe the exercise to the students, telling them where they should be looking and what to expect as they complete the maneuver. While waiting in line for the next run, they’d go over any issues that arose. The coaches would then challenge the student to increase their speed or refine their inputs, but always letting the student take the lead.
Roughly half the volunteers at each station were watching the course and observing each car as it completed the exercise, resetting pylons when the inevitable oopsie lead to cone-crushing mayhem. Well, no, maybe one or two cones would get bent–ABS is effective but makes for little excitement. Indeed, the entire affair was sensible, safe and secure.
Then there was the Accident Avoidance stationwhere you’re accelerating flat-out toward someone who’d direct you into a neighbouring lane at the last moment. If you listen carefully, you can almost hear the sound of sphincters clenching above the roar of the engine. But once again, the students are going only as fast as they are comfortable with.
Lunch was signalled by the appearance of multiple cardboard boxes, packed with Tim Hortons sandwiches. I barely had time to stuff my craw with chicken salad before we were ushered in the general direction of the parking lot, where the pylons had been cleared away and a tractor-trailer stood in the middle, flanked by an array of vehicles at various positions, including a truck about 100 feet directly behind the rig. At the other end, a firetruck had just pulled up and three people in uniform were laying down a tarp. In between, there was a small pile of snow (courtesy of the ice rink) and several small, black boxes. Time for some demos.

(Be sure to catch Part Two of this article in the upcoming April Issue of Provinz.) 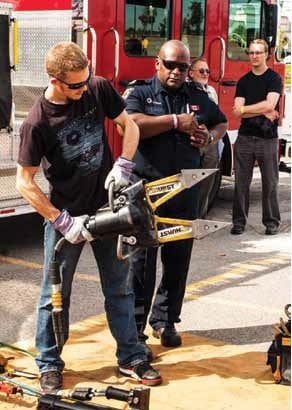