I’ve always known that people who buy cheap tools get what they deserve.  Some years ago I bought an cheap 3/8″ “micro adjusting” torque wrench from an import/export shop in an industrial plaza.  I bought it because it had a compact head and I wanted to better tighten the rocker shafts on the 911, which were leaking slightly.

It’s always been my habit, before using this type of torque wrench, to test it at a low setting to make sure it is still working.  When you are lying under a car or are in an awkward position, it is difficult to tell if you are applying too much force. I once twisted off a main bearing cap bolt that called for 100 ft-lbf because the borrowed wrench did not “click”.  So, before I used my cheap wrench to to install a differential cover, I tried it at the 10 ft-lbf setting. To my surprise, there was no “click” to be had at this or any torque setting.  Time to buy a new 3/8″ wrench.  I have 4 other torque wrenches.  Two beam, and two half inch micro adjustable:  a 150 lb and a 250 lb. The good thing about the “beam” type ( the kind with the indicator bar),  is the reliability. This type of torque wrench relies on the modulus of elasticity of steel, which is invariant. As long as the needle points to zero, the wrench will produce repeatable, if not accurate, results. The difficulty is that they are almost impossible to use. They are handy, however, to check the calibration of the micro adjusting variety.

On the Internet, I found that Gray is now making a 3/8 wrench with a compact head. I noted the model number and called Atlas Tools on Queen Street. They could order me one, but the price was going to be around $400!!. They said, however, that they had a “Jet” torque wrench in the 10-80 ft-lbf range that I was looking for, for under $100. The Jet brand name sounded a bit third world, but there was a Jet website, so I headed down to Queen St W.  Not surprisingly, the Jet wrench was poorly made and shared a common heritage with the wrench I had just trashed. Returning home, I searched for another Gray distributor. Markham Industrial had the wrench I wanted in stock for under $300, and also a slightly cheaper Gray that did not have the swivelling head. I ended up buying the cheaper Gray for $200 after a bit of haggling, and I felt great about the expenditure.

Back home, I pulled the old wrench out of the trash and decided to take it apart. As you can tell from the pic, the operating principle is that a pin rides over a spring loaded roller to produce the clicking action. Changing the spring preload changes the torque setting. Lots of room for getting out of calibration here. 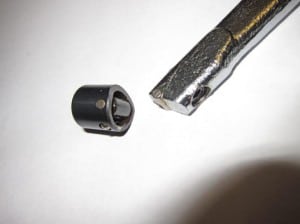 Applying the correct torque to a fastener is not just to prevent it from becoming loose. A properly bolted joint also prevents fatigue failure of the bolt. A bolt is typically torqued to around 75% of the yield of the fastener. If this type of joint is subjected to a cyclical force, only about 10% of the cyclical load is taken by the fastener. The rest is taken by the reduction of the compressive force on the joint.
Using a torque wrench is not the only way to correctly load a fastener. The two other ways are bolt stretch, and the “torque angle” methods. Bolt stretch is probably the most accurate method, and is commonly used on connecting rod bolts. In torque angle, the bolt is torqued a computed fraction of a turn from snug. For both of these methods, the numbers have to be determined for each specific application.

If, when using any wrench,  you tighten the bolt more than a fraction of a turn from snug, it means you have taken the bolt beyond yield, or you have stripped something. When using a torque wrench, the bolt must be turning at the point where the proper torque is achieved. If the wrench clicks before the bolt moves after racheting, you need to loosen the bolt and try again. The reason is that static friction is greater than dynamic.  Thread lubricant can have a large effect on torque values. Often, the lubricant is specified for the application.

When you store click type wrenches, reduce the setting to the lowest calibrated torque value.