In November 2011, I happened to be channel surfing when I came across a show on Speed Channel called Porsche Rennsport Reunion IV.  At the time, I did not own a Porsche—but it piqued my interest as I was actively looking to buy one.  During the Spring of 2012, I found and purchased a 2005 Porsche Boxster in Florida, had it transported to Ontario, and took delivery that April… I now had my first Porsche!

The first order of business was to join PCA UCR. I did this at the UCR Spring Open House and became a member in May 2012. I have to say that I continue to enjoy my Boxster and also participating in UCR activities such as Drivers Ed, Fun Runs and Socials.  As I was enjoying these events, an idea in the back of my mind was that I’d attend the next Rennsport Reunion—and drive my Boxster there, wherever it was held. 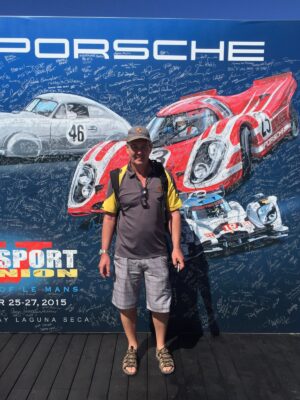 Fast forward to spring 2015.  Porsche announced that Rennsport Reunion V would again take place at Mazda Raceway Laguna Seca, so I purchased my tickets for the three days and started to plan my trip to California.  It is a long way from Ontario to Monterey (the shortest route is approximately 4,300 kms) but as I would be driving a Porsche, I figured I could make the trip in four days!

Interstate 80 is the most direct route and travels across the Great Plains (America’s breadbasket) before getting into more interesting scenery towards the western end of the trip.  In truth, the first half of the trip is somewhat boring!  On the other hand, cruising along the Interstate quickly eats up kilometres, providing more time for you to enjoy the more pleasant scenery and winding sections of the road through Wyoming, Utah, Nevada and California.

Travelling along the Interstate in Nebraska with the top down and radio on, the broadcast was interrupted by a severe weather warning, advising of quarter-sized hailstones and to “move inside… away from the windows!”  The storm warning was for two specific counties—the trouble was I had no idea where they were relative to my position and route!  I immediately pulled over, put up the convertible top and then drove with one eye on the sky and the other on the road.  Other than the sky darkening quickly at one stage, nothing happened, thank goodness.

A memorable part of the outbound trip was passing through Salt Lake City first thing in the morning and seeing the many salt lakes with no wind on their waters, and with shimmering islands rising up, seemingly dis­connected.  Passing a sign for Bonneville Salt Flats, I real­ized that this might be a rare opportunity to see them, so I turned off the highway only to find that the Flats were under water and that for a variety of reasons (see Google) most of the events on them this year had been cancelled.

In Reno, the Street Vibrations Fall Rally (a motorcycle festival) was taking place.  It was good to get out of the car after three long days of driving and walk around the downtown area, taking in the sights.

Travelling through the Rockies from Nevada to California, there were some nice sections of road!  I met my first group of Porsches while travelling along Route 1, south of San Francisco.  They seemed to know where they were going, so I followed them down a turn off, to a nice restaurant by the ocean.  They were all from the Wash­ington area and also heading for Rennsport Reunion.  We had a very enjoyable lunch and I was reminded once again that it’s not just the cars, it’s the people! 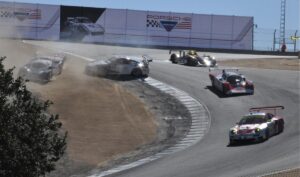 Rennsport V, what can I say?  It was Porsche over­load… so many things to see, presentations to listen to, races to watch, cars to admire in the corral, vendors galore, the PCA tent, and endless Porsche enthusiasts to talk to.  After three days of it, I was happy—but ex­hausted! 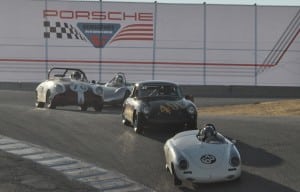 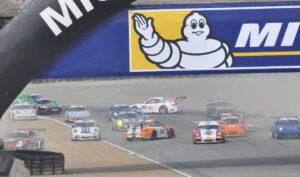 Some of my most vivid memories from the event include:  Vic Elford explaining why he liked driving the (Le Mans winning) Porsche 917 (“It was 25 mph faster than the competition!”) and Derek Bell saying that he probably would never have made it as a race car driver in today’s environment as it is too expensive; the Corkscrew (Turn 8) and Turn 4 seemed to be the best locations to see cars spin off the track; a lunchtime conversation with an attendee, who, apart from his Porsche interests, is an Engineer working on the SpaceX program; the Le Mans winning Porsche 919 Hybrid that’s about as loud as a family car, but scary fast; and the Gmund Cup races featuring Porsches from the 1950s and 1960s. Those vehicles are orders of magnitude more valuable than my Boxster, yet they are driven with abandon around the track!

I decided to make two side trips on my return home, one to Sequoia National Park to see the Redwoods and the second to drive to the top of Pikes Peak. En route to Sequoia, I passed a largely empty reservoir (the second I’d seen like this), demonstrating the extent and long du­ration of the Californian drought. The high water mark was clear to see on the reservoir valley sides and on the upstream side of the dam. Water levels were so low that I’m doubtful that any water passes through the dam and, more telling, there is grass and even small trees growing on what used to be the bottom of the reservoir. 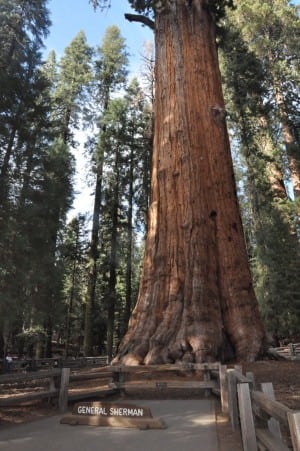 The redwoods in Sequoia grow at the top of a moun­tain, 6,600 feet above sea level and they make the white pines of Ontario seem like saplings! The road in the park is a fun drive, climbing about 5,000 feet with plenty of switchbacks. At the end of the road, a 1 km hike will take you to the General Sherman, a 275-foot-high sequoia that has a base diameter close to 40 feet—the world’s largest living tree. Your lungs will remind you that you are hiking at close to 7,000 feet! I’d thought that this drive would prepare me for Pikes Peak… it did not!

Pikes Peak is some 14,100 feet above sea level and more importantly, the tree line is at 11,800 feet, leaving the last six miles of road with no barrier (it’s a long way down if things go wrong). This is certainly not a trip I’d recommend if you have a fear of heights—how they race up this mountain is beyond me!! I’ll admit that I didn’t see much scenery during the last six miles of the climb, in fact I did not see much of anything except the yellow line in the middle of the very winding road! Thankfully, not many vehicles were coming down as I was going up, and I finally reached the summit, which was some 20°C cooler than at the base. I’m sure the view would be spectacular on a clear day, but sadly it was overcast and I was close to the cloud ceiling. 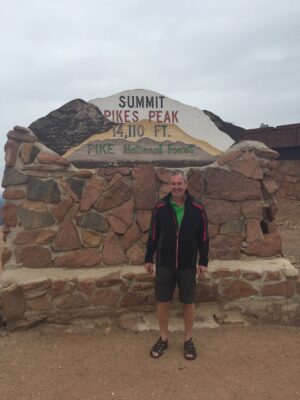 I took the trip back down in low gear and was sur­prised when a Park Ranger stopped me about half way down… to monitor my front and rear brake tempera­tures with a thermal gun. I passed his test (the Boxster was in fact flawless throughout the trip, and sipped its way through just one litre of oil over the 10,000 kilome­tres round trip) and he allowed me to continue. I can now say I have done Pikes Peak!

The scenery through southern California, Nevada, Utah and Colorado had been spectacular, but I picked up the pace and moved quickly towards and through the Plains. Eleven days after I started out, I was back home, tired but happy… with another item crossed off the bucket list!

The Aerodynamics of the Porsche 917