The view from the control room

If I told you that my Cayman put on over 150 pounds by the application of $5 worth of alloy extrusion, six feet of Gorilla tape and four small blocks of MDF you’d likely think I was exaggerating, right?

Not only did we achieve that little trick within minutes of starting a few tests, we also reduced the amount of drag exerted by Martini on the atmosphere through which she travels. By now you probably think I’m a few quarters short of a dollar and wonder why Provinz would publish such sophistry?

The thing is, it is all true. All one needs to perform such acts of seemingly implausible trickery is a $50 million wind tunnel, a professor of aerodynamics, a room manned by folks with Masters in Engineering and some technicians that really know how to operate the tunnel.

And a ticket to get in there. My ‘ticket’ was Ernie Jakubowski of Mantis Racing. Readers of Provinz may recall an article I wrote earlier this year which finished with a teaser about Ernie having secured wind tunnel time at a major university.

I can now claim to be the first client of Mantis outside of his own family fortunate enough to make use of this facility at the Oshawa-based Automotive Centre of Excellence [ACE] of the University of Ontario Institute of Technology.

ACE is sited on the campus of the UOIT, which in and of itself is a splendid facility, but I would say the wind tunnel there is probably the most impressive feature. Standing five stories tall, it was completed in 2010 with major funding provided by GM, PACE and all levels of government.

Unless you want to trailer your car all the way to the Aero Dyn Technologies facility in Moorestown, NC—the facility used by NASCAR teams and the like—this is the best bet in town.

The dedicated team run testing for all types of vehicles and structures that need to be tested at anything up to 250km/h and in temperatures from -40C to +60C. The humidity can be precisely controlled from five percent to 95 percent RH and a massive overhead lighting gantry can simulate sunshine conditions at any point on earth at any time of year and at any hour.

I guess they would not have consumed too much electricity to simulate the Ontario winter last year! And I haven’t even mentioned the four-wheel drive-capable dynamometer set into the giant turntable! As I say, a very impressive facility. 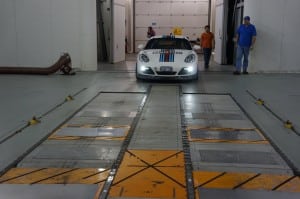 Back in 2010 Ernie read a small article in a Toronto newspaper about the facility, recognized the potential benefit of this technical wonder in our own backyard and started talks with the University. Three years later he was taking part in their pure research program with a view to designing and making the instrumentation necessary for evaluating the parameters that racers would find useful in optimizing aerodynamics on their cars. 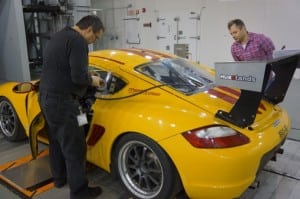 Over many visits to the tunnel, the Mantis team—working closely with John Komar, the Director of Engineering and Operations and his team—have come up with a number of tools, gauges and procedures for testing race cars. At the time of writing they are working on refining the time taken for each test including the transition from one mode to another in order to produce an a la carte menu of testing programs.

From my own experience I have to say it has been very worthwhile. Mine was one of three track and race cars being tested during the annual ‘open day’ the centre hosts for prospective students and their parents. It was thought that having race cars in the facility would bring some excitement to the day and whoever had that idea was right! 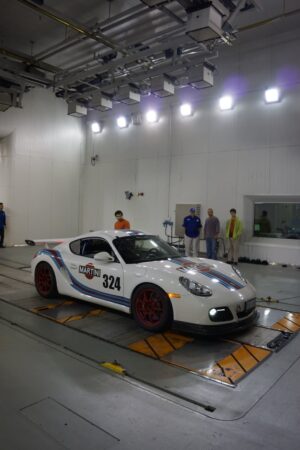 Houston, can we be cleared for take off?

First up was Margaret Jakubowski’s 944 racer—just to get a baseline of the aero effects. The car was pushed into the cavernous chamber and lined up precisely with the gauges and measuring equipment. In gear, with the main brakes engaged by a nicely utilitarian ‘pedal depresser’, ballast in the driver seat and we retired to the glass fronted control room.

Once the safety checks had been completed the operator turned the dial which spools up the 24,000kW turbine housed five floors above our heads. At slower speeds it is difficult to tell anything is happening. There’s no real noise and no movement from the car.

Slowly the windspeed was increased in stages to the chosen maximum which today was 180kpm. At that speed you can certainly hear the muted roar of the slipstream and the car bounces up and down a little, the rear wing shaking. The amount of shimmy and shake can be quite significant and it makes you realize that aerodynamics are a big factor on how your car behaves at speed. Just try bouncing the suspension of a dedicated racecar by hand. You will not be able to move it, but the wind has no problem at all making those beefy springs work hard.

When Martini was rolled in I had really no idea what to expect. Like most enthusiasts I have followed the trend and fitted a big rear wing, a carbon front splitter and played around with the car’s rake angle.

I know from driving Martini how she felt after each of these modifications and that the rake angle and front splitter had made the most significant improvements. But there was no way to quantify them or really know what that rear wing was doing.

Seeing her sitting in the chamber from the security of the control room was a bit like waiting for the results from an x-ray; you hope for the best but don’t really know what might be diagnosed.

The first ‘blow’ with M in her stock trim surprised us by showing no down force at either axle, at any of our chosen speed settings. Instead there was considerable lift. Not the best characteristic for turn in and high entry speeds.

So then we twiddled with the rake, or angle of attack, by inserting MDF blocks under the rear wheels and found a setting that negated the lift almost entirely. More fiddling between blows with pieces of alloy extrusion produced in excess of 150 pounds downforce from the rear wing but worsened the balance front to rear.

One thing you learn very quickly when working on aero is to change just one small thing at a time. One small change will affect everything else, trust me on this.

So we did some more rake adjustment and ended up, within a relatively short time, with a car that is balanced fore and aft, has a known range of down force figures and is at the same time presenting less aerodynamic drag overall.

Of course, I am not going to share what we learned, and anyway Martini’s wing is a custom one-off. But it does show how you can make some really meaningful and useful improvements in balance and down force and drag relatively easily and at a cost that is not at all prohibitive.

For me it was about the price of a set of new tires. In that perspective it suddenly becomes very good value. Ernie has come up with a simple but clever idea for increasing the downforce at the front axle; if it works as expected (a prototype has been tried on the 944) it should be highly effective. We hope to put that into practice soon.

If we keep developing these improvements you may one day see Martini hanging upside down just like that famous 956 in the Porsche Museum in Stuttgart! 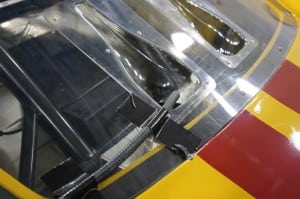 Ernie and I are now headed to Sebring for the three-day PCA DE with Suncoast Region to see what the real world effect of our testing has done for the car. I will write about our Sebring experience in another article this winter.