Home »Driving»Two days at the Spa 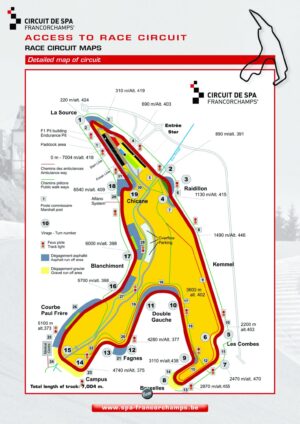 Spa-Francorchamps—the beautiful, undulating seven-kilometre circuit in Belgium’s Ardennes mountains—has the best of everything in a race track. Thanks to its sculpted Ardennes setting, this magnificent circuit encompasses major gradient and camber changes with low- and high-speed curves and corners.

The track’s executive summary shows the key to a fast lap is the downhill swoop to Eau Rouge, an ultrafast S-bend where cars may bottom out. This must be the most daunting corner of any racetrack; cars plunge downhill (past the old pits), twitch left into a dip, nip right, and finally arc left uphill to Raidillon.

After Raidillon comes the stretch to Les Combes, a series of downhill swoops to Pouhon and the Paul Frere turns before a climb back to the pits through Blanchimont.

The briefing commences at 8:30 a.m. with a welcome speech from the pit wall to the fifty or so enthusiasts hailing from Europe, Australia, the US and Canada. That many are Spa first-timers all but guarantees an interesting day.The group is appropriately cautioned against “racing” and/or competitive actions. Evidence of anything wayward earns culprits a one-way ticket home.

To help prevent wayward behaviour, we begin with a track walk, stopping our cars on the old grid before hiking up the implausibly steep hill from Eau Rouge to Raidillon with this section’s famously unique lines and requirements.

We listen. “Whatever you have been told, Eau Rouge is not flat-out. It is very far from flat-out, and unless you can accurately replicate your line at least ten consecutive times, you are not ready to increase your speed.” Got it. 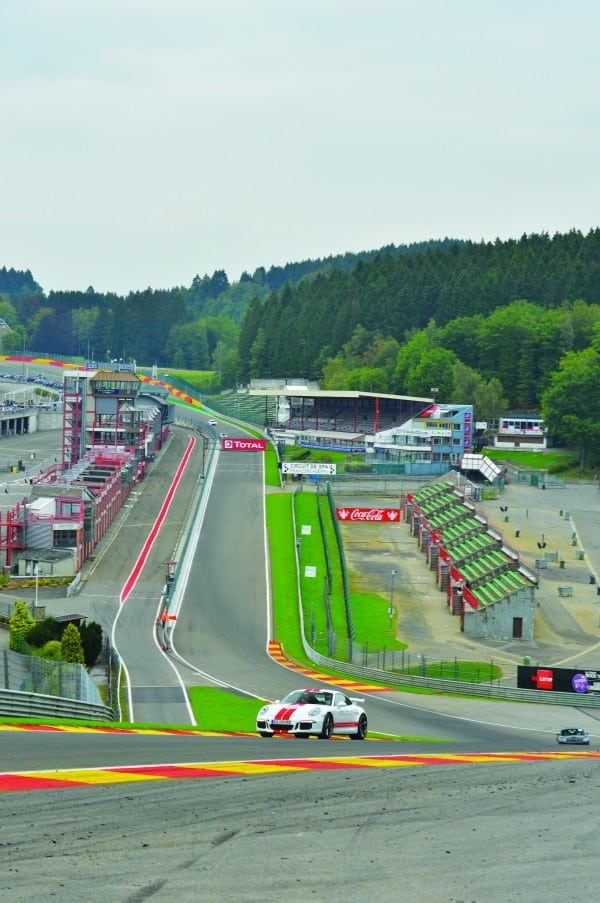 Next stop: Pouhon, the long, double-apex, offcontinued camber, lefthander that curves into the second half of the circuit. The camber drops cars out to the right so the outer rumble strips are really rumbling at the exit.

And then we arrive at the seemingly innocuous Blanchimont, a left-turning penultimate bend before the chicane brings traffic back onto the pit straight. In reality, Blanchimont is an ultra-fast, no-check, no-lift, flat-out curve. Lines and balance are crucial.

Every marshalling point is manned and the blue flag is the one most commonly waved. “Stick to your line, and the guy behind you will find a way around you.” Quick lessons confirm driving here is not for the faint of heart, as there are no North American point-byes. Windows stay up, and indicators let approaching cars know which side you’re committing to. If you don’t see an approaching car and don’t flash your indicator, the car will pick a side and be alongside in a flash. Everyone needs their wits about them.

I request an instructor (Andy) for the first morning, and hearing his commentary above the din of so many choice engines is challenging: Today’s group comprises Radicals, Lambos, Ferraris, several GT2 RSs, a couple 4.0s, five 991 GT3s, a 918 Spyder, four Lotus Exiges, several Elise 2/Elevens, three Cup cars, a BMW M3, and half-a-dozen of RSR’s fleet of Clio Cup and Megane RS26Rs. Nice.

The moment arrives. I’m compressed into a GT3’s full racing harness, pull out slowly into the F1 pit lane for driver wristband inspection, and accelerate out onto the track below La Source hairpin—any local photographer’s favourite because cars come close enough to touch the wall.

Quickly up is Eau Rouge. Corner entry is from the pit wall (Andy: “Have your right mirror thirty centimetres from the wall!”), veer left and—adhering to Andy’s guidance— don’t accelerate too soon.

There is still a lot of movement in the car, and accelerating with no front bite threatens bad things. Bad things don’t arrive, and it’s riveting as we top out, barrelling across Raidillon’s kerbs and onto the long Kemmel straight to the chicane. The GT3 is deceptively quick, gaining speed—now!—before braking early for the tight right-left followed by a mischievously tight right.

Another downward rush. Then, in rapid succession: long, adverse-cambered, very-late-apex right (limited throttle here), left-hand kerb clip, straight-line to the tight, off-camber left before another longer run down to Pouhon. It’s fast and feverish with several other cars vying for each corner. Feather the throttle, clip the apex much further ‘round than your instincts warn you, ease the car to drift out, and transition slightly downhill again to the next left.

Andy stays with me through the early afternoon, at which point he turns me loose. Last parting words after some wonderful first-day-at-Spa compliments: “Don’t go into quite a difficult corner like Eau Rouge and be too aggressive on the throttle. Turn the car so the left wheels are on the outside of the rumble strips. The lefts wheels completely cross the strips twice before the turn up hill.”

And with that, I am alone. To experience. The wrecking truck trundles into the top paddock, hauling a sad Radical carcass after the driver lifted coming out of Blanchimont. Oversteer was rapidly replaced by shattered pieces at the outside wall. It’s not the only casualty as several cars are trailered away for repair.

I am not one, and, at the end of day one and 320 track kilometres, my grin is that of someone on a permanent high.

I reminisce contentedly: I’ve experienced the 991 GT3 with a full day of lapping the hallowed Belgian GP circuit.

How did I actually get here?

Well, I originally booked a car identical to my own to experience Spa in—a 997 GT3—but that car was sold, so I was shifted to a 997 GT3RS. Then, the stable lost the RS and I “inherited” the car I drove, a 991 GT3 with a darned PDK “automatic” transmission. Dejected for the balance of the evening, I had derided the flappy-paddle tranny suggesting that it was a point-and-shoot, lessengaging experience. When Porsche announced PDK as the only options for the future, it seemed like the worst of heresy—GT3 drivers row their own gears! But during my first few Spa laps (as Andy highlighted a few pertinent facets of PDK), my gear-rowing world began to unravel…

With the option to shift “naturally” with an ergonomically correct, extremely short-throw consolemounted lever or via steering wheel-mounted paddles (smaller and better-fitting metal paddles than standard 911s), shifts are always clean. In default mode, they are delivered with a subtly perceptible torque bump; enough to sense something has happened. In Drive, PDK is happy to trundle along, shifting seamlessly.

But Sport mode ups the ante. Gear changes are lighting quick, and the car switches to an aggressive, trackfocused system that keeps the engine at the top of its rev range (how about 9,000 rpm?) as much as possible.

The paddles have an agreeable weight and communicate with a “click” mechanical action. Verdict: PDK is utterly fantastic.

The affable track team once again laid out the croissant and fruit breakfast, followed up by a delightful lunchtime buffet in the roof-terrace restaurant above the pit garages. Time spent eating and relaxing during the rain after the previous day’s exhausting laps created no sense of urgency to get out in the damp, slippery conditions. Patience paid off as the wind blew the rain away leaving the sun to shine brightly, warming our hearts and the track.

With seven hours of open track time on Day 2, another 336 kilometers saw my lap times drop ten seconds. Time learning the track and the car made for solid progress.

But, isn’t a day at a “spa” supposed to leave you relaxed and comfortable? My two days at Spa left me drained and haggard. And sporting a gigantic smile with thoughts towards a return visit! 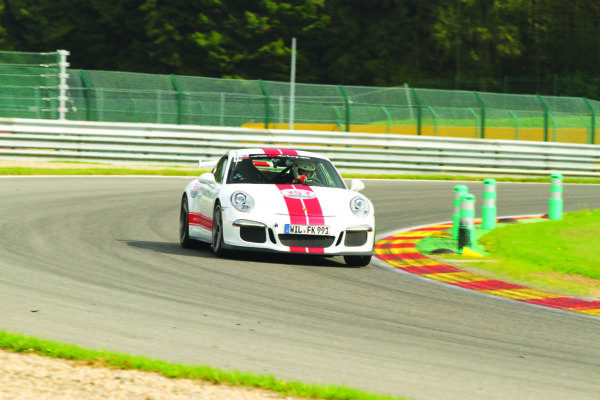