Celebrating the holidays with good times, good cheer and our good friends 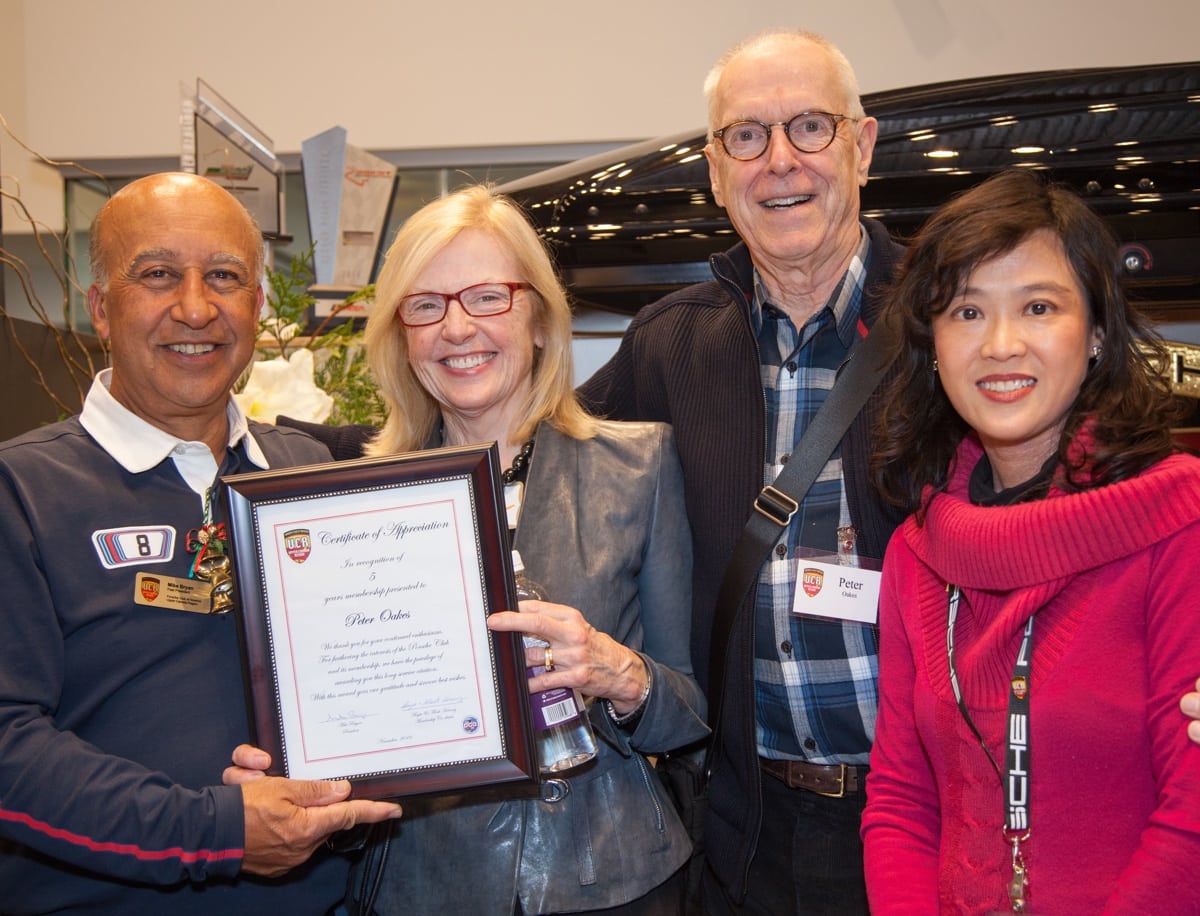 Kathleen Wong, President of UCR, introduced the new Board of Directors and seven of the 10 Directors were present at the social: Mike Bryan (Past President), Michael Pohlmann (Vice President), Terrence Chong (Treasurer), Neil Dowdell, Peter Oakes, and David Walker. Kathleen then introduced two of the three Fun Run Co-Chairs, Peter Hoffman and Cynthia Wong, and 2017 Concours Chair – Randy Gananathan, who is also our Provinz Editor. Kathleen also thanked Mario Marrello (2011 & 2012 UCR President) and Sunil Sharma for their help with our online registration website www.clubregistration.net for PCA and UCR events. 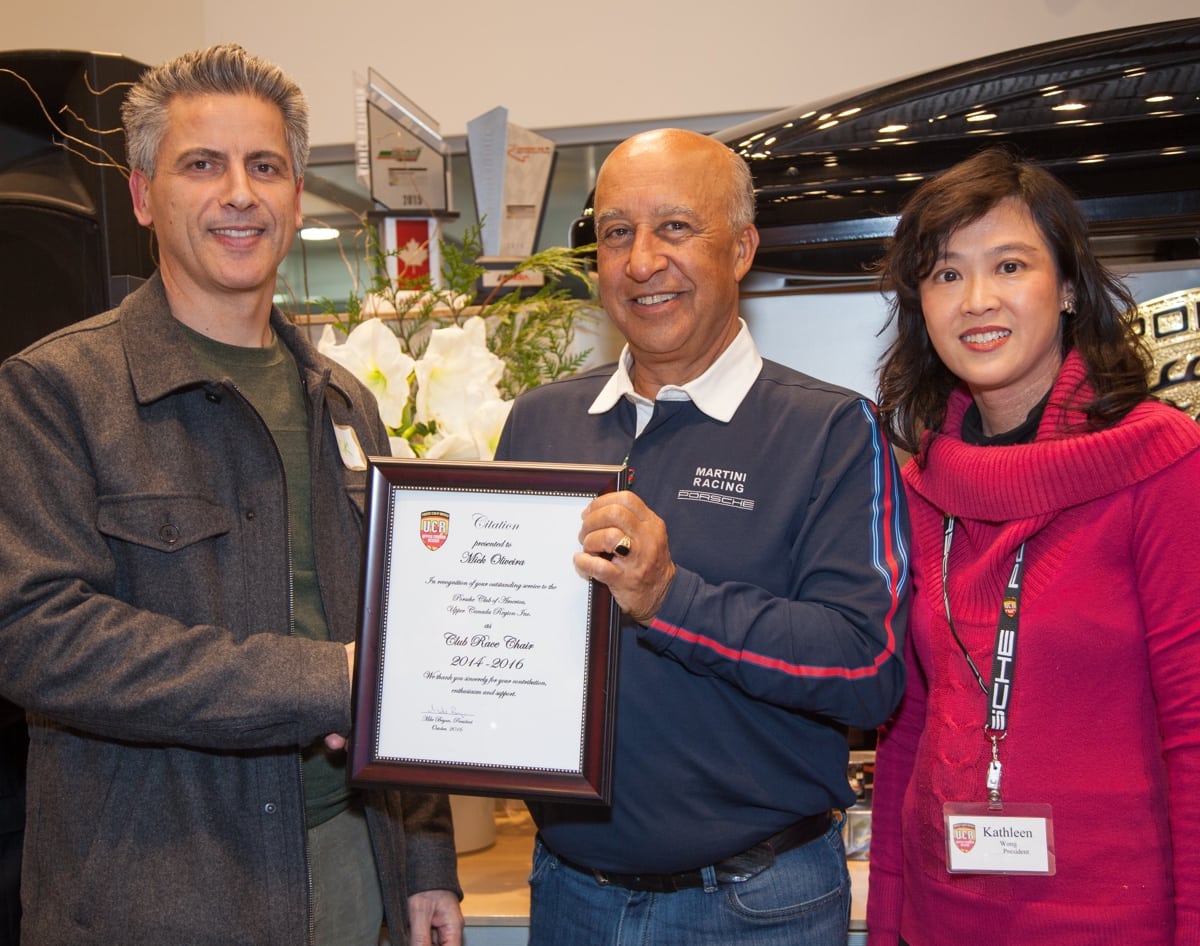 Mike Bryan (Past President) and Kathleen Wong (President) recognized Mick Oliveira, who has stepped down as 2014-2016 Club Race Chair.

It was a nice surprise when we saw two long-time UCR members at the holiday social – Gord McNeil, 1994 UCR President and Patti Green, 1995 UCR President! Mike gave a Past President’s badge to Gord and welcomed Patti to our holiday social. Mike and Kathleen then presented a 30-year Membership Recognition Award to Botho and Susan von Bose, and a five-year Membership Recognition Award to Peter and Beth Oakes. 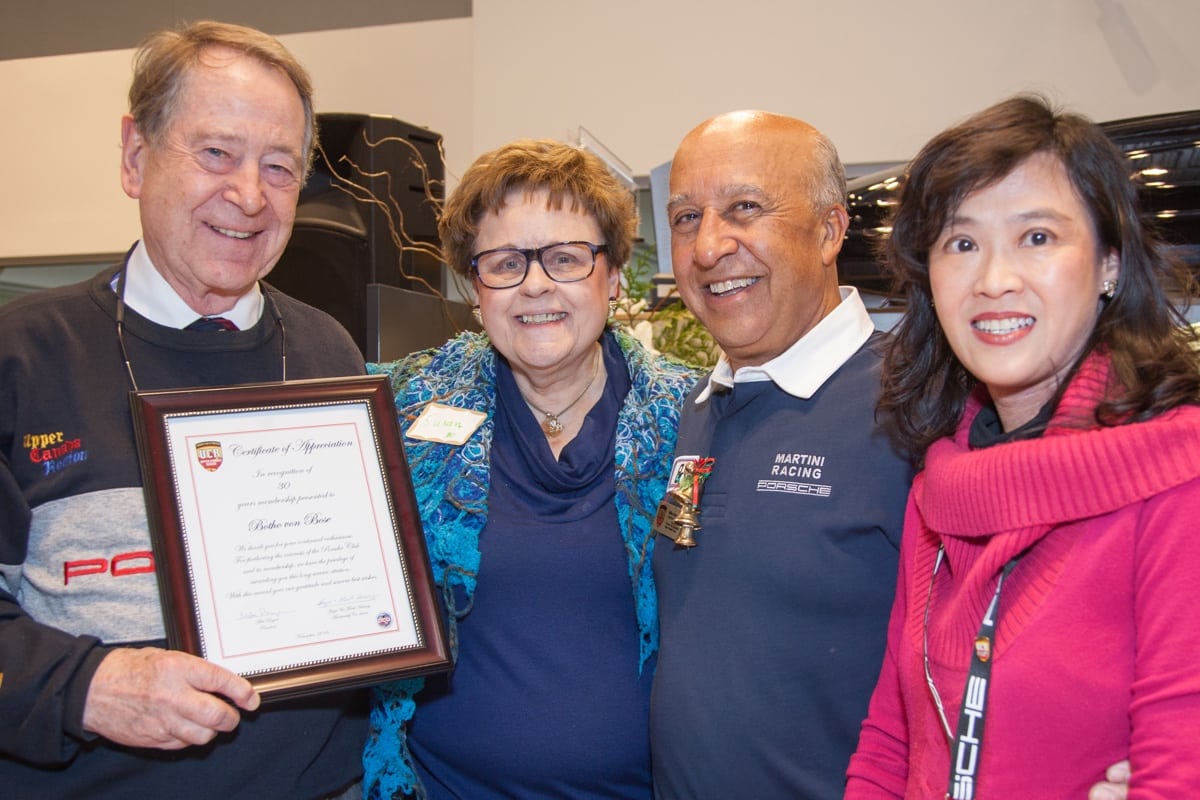 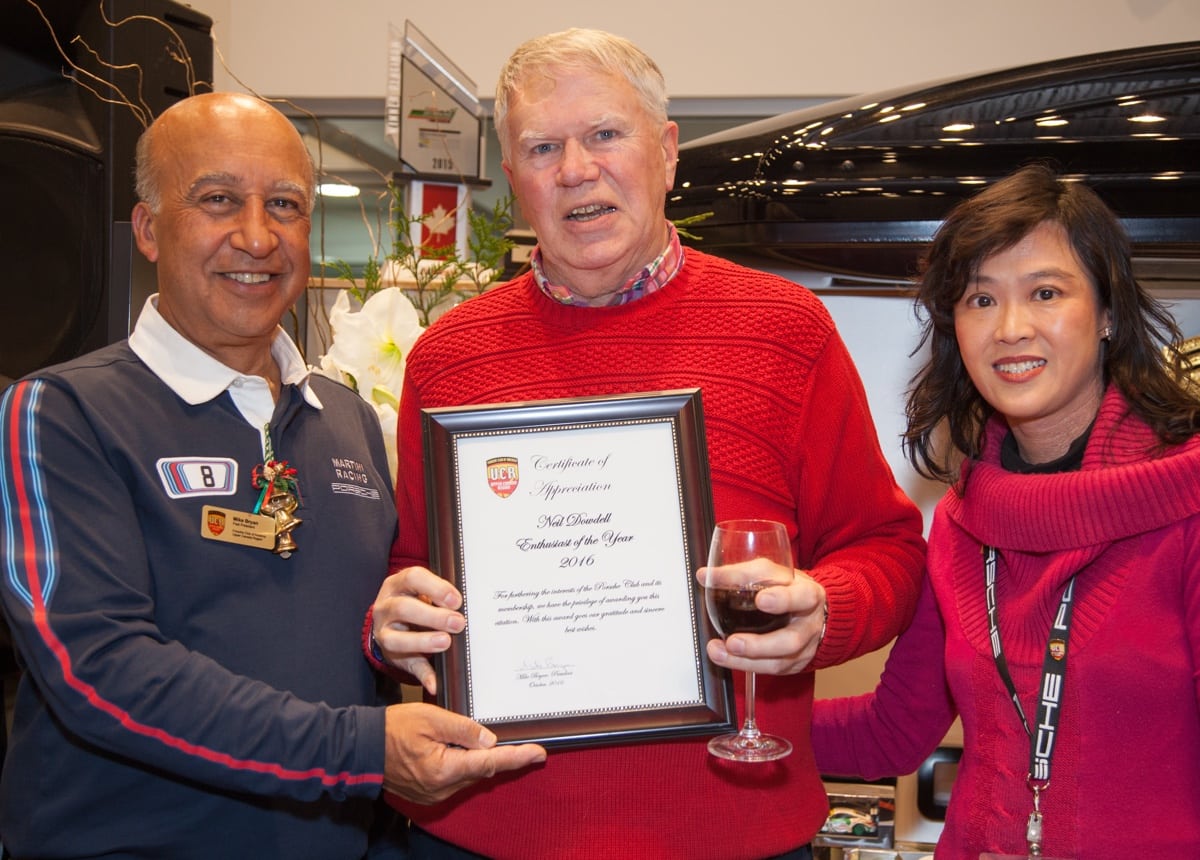 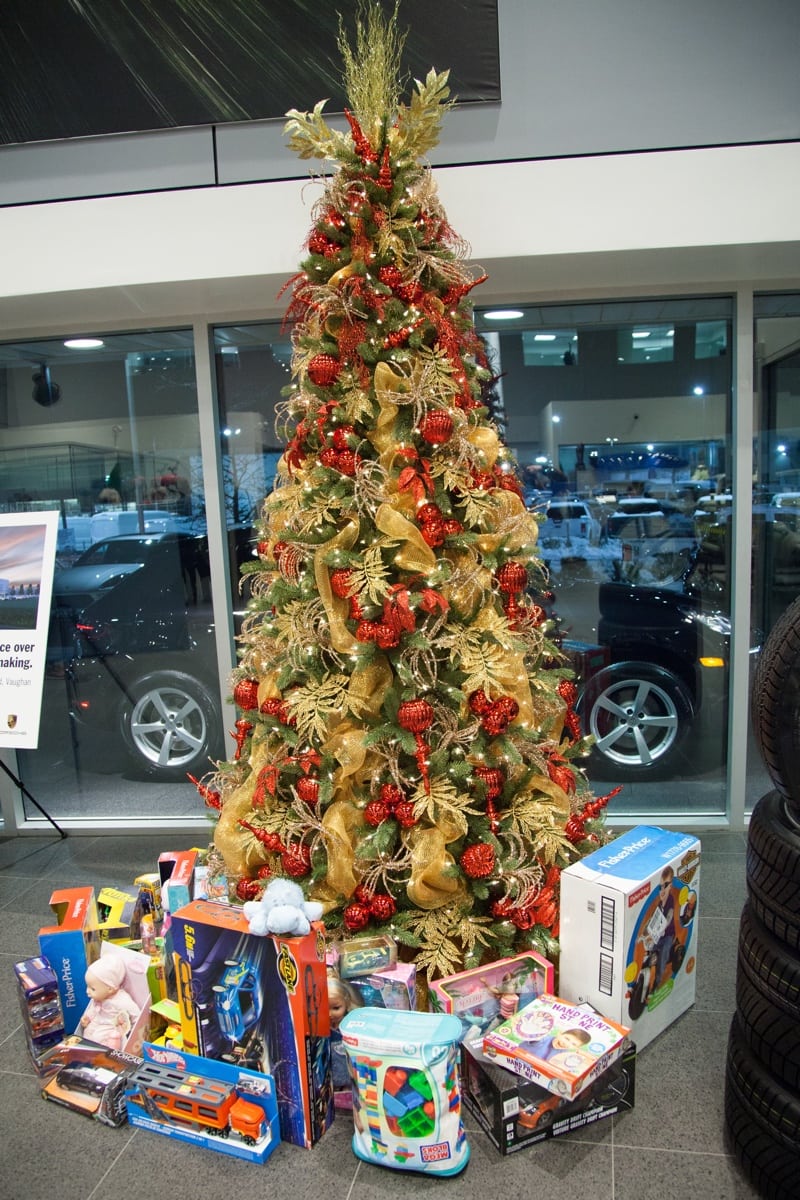 Mike and Kathleen also recognized Mick Oliveira, who has stepped down from the Club Race Chair role after organizing the Can/Am Challenge Club Race for UCR from 2014 to 2016. Mike and Kathleen congratulated Neil Dowdell, our 2016 Enthusiast of the Year. Neil has been an active member ever since he joined UCR in 2003. Neil has organized a number of Fun Runs and has worked on the grid at our Can/Am Challenge UCR Club Race during the past 11 years. Congratulations again Neil, and well deserved! Kathleen then recognized Michael A. Coates, UCR Photographer, who is stepping down after taking 180,000 pictures for UCR. However, Michael is still committed to take pictures for us again at our 2017 Can/Am Challenge Club Race, at Canadian Tire Motorsport Park (“CTMP”) on August 4-6.

Ashley Berkel, Sales Manager, welcomed UCR members and talked about the new Pfaff facility, at 105 Four Valley Drive in Vaughan, which will open in 2017. Pfaff Porsche has been serving its customers at the current facility in Woodbridge since 2001. Pfaff Porsche has grown so rapidly in the last several years that it needs a bigger facility to sustain its growth in the future. The landmark facility in Vaughan has over 100,000 sq. ft. of space with a large showroom area that features a heritage lounge and a classic car display, another display of over 30 vehicles, cutting-edge interactive exhibits and 32 service bays. It will also have a simulator in the showroom, so customers can experience the thrills of racing at various racetracks such as CTMP. 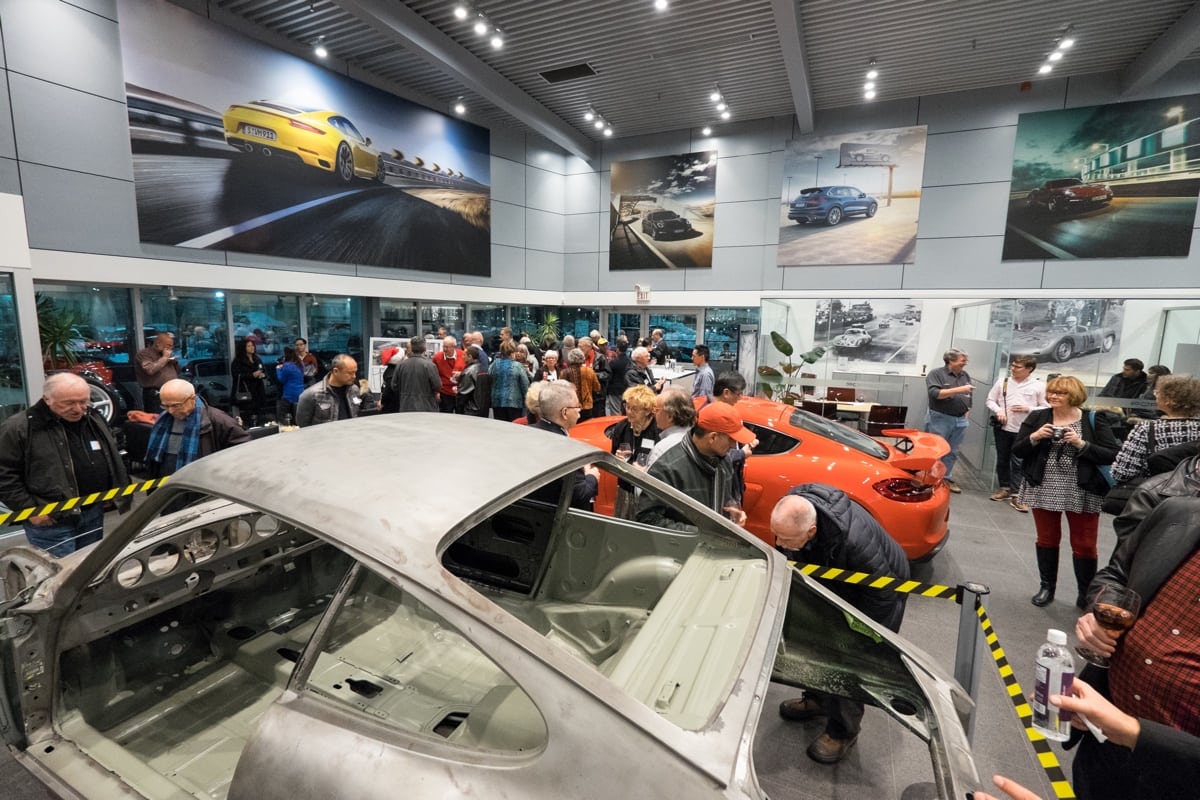 Kathleen Wong, UCR President, introduces the 2017 Board of Directors. 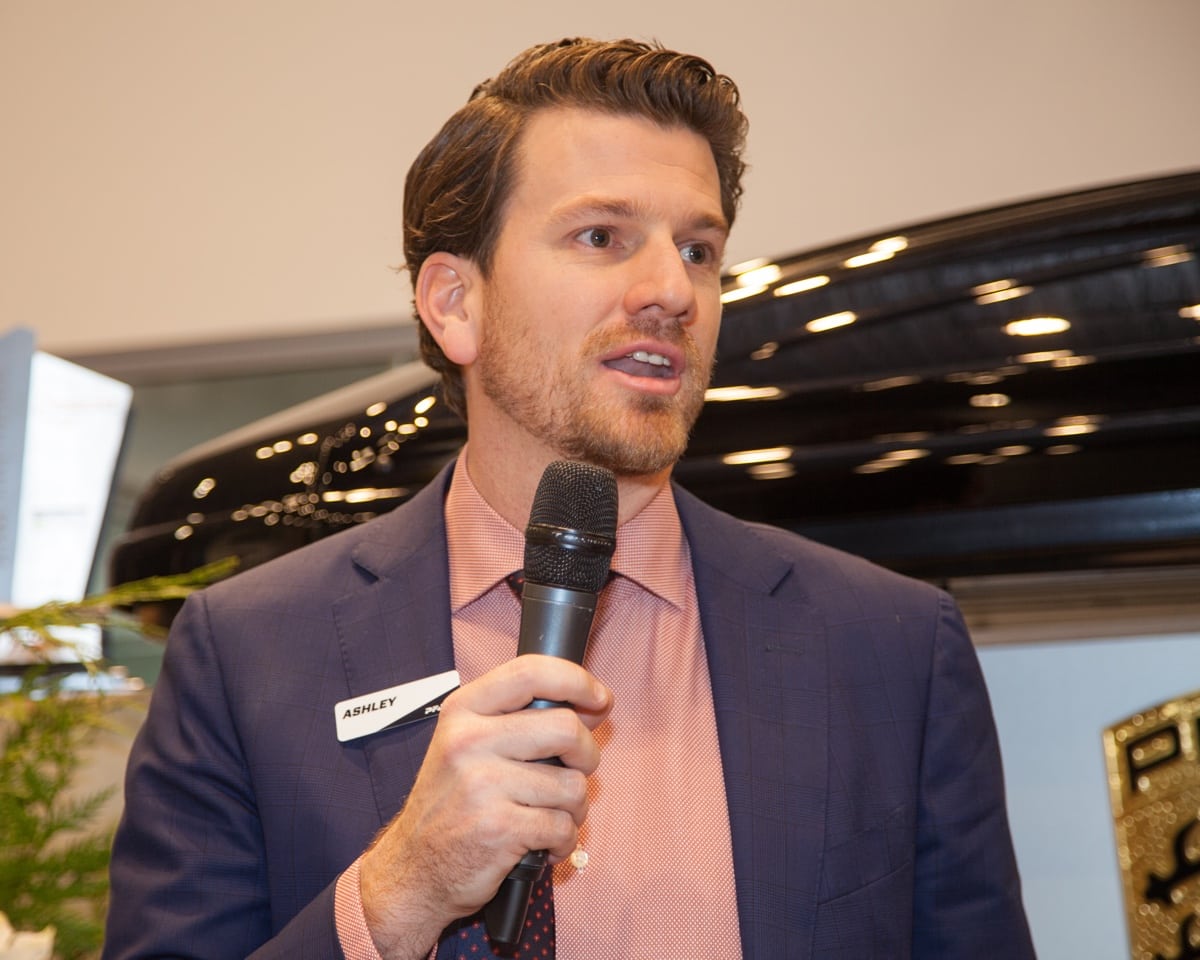 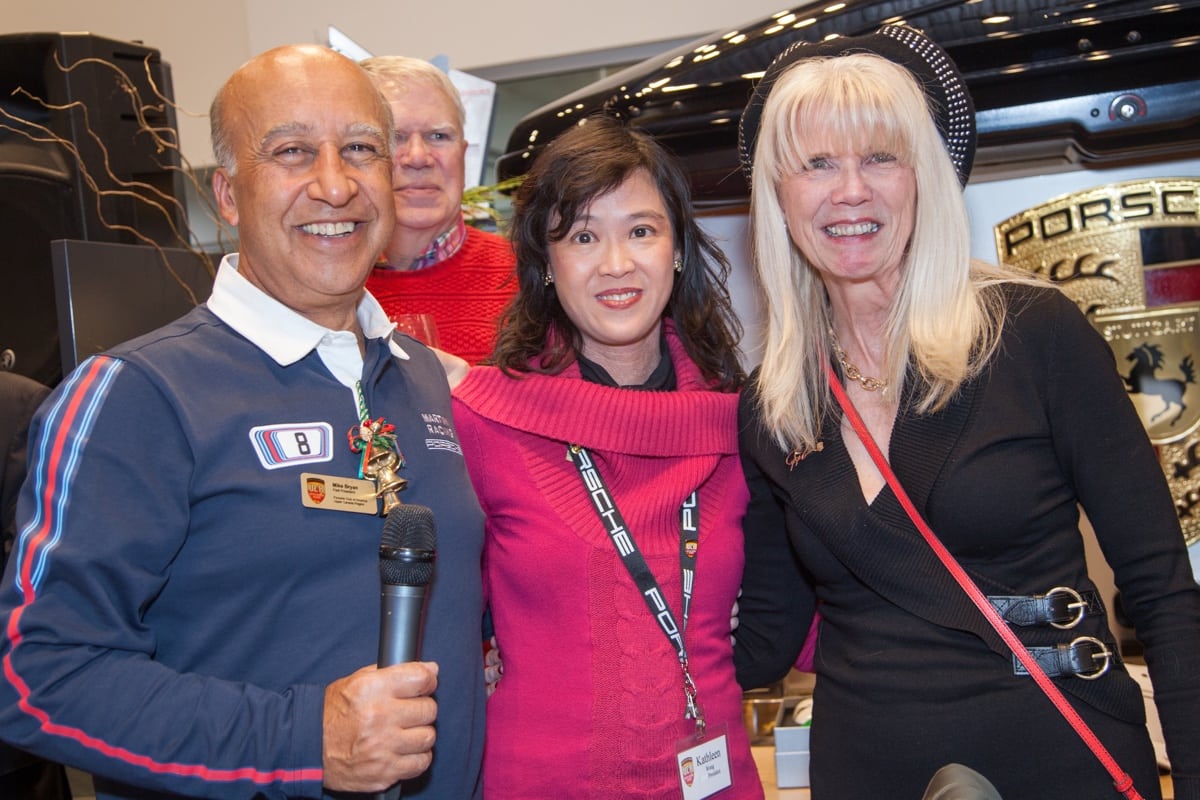 John Pera, Pre-Owned Manager, spoke to our members about the classic restoration program. The shell of a 1972 911 T, which was formerly owned by Canadian Motorsport Hall of Fame inductee, Horst Kroll, was displayed in the middle of the showroom. The vehicle is currently undergoing full restoration at Pfaff Autoworks and Pfaff Porsche. Pfaff Autoworks has already restored major sections of the body, including the floor, rear passenger area, door sills, and right front fender and door. More work still needs to be done to the front structure and left-side bodywork before the car is repainted in its original metallic green colour. Dave Draganac, Pfaff Porsche’s certified Porsche Classic technician, has simultaneously been restoring the vehicle’s mechanical parts, which include a full rebuild of its engine and its rare Sportomatic (clutchless manual) transmission. Pfaff Porsche expects to complete the restoration project in early 2017.

Don Lewtas, UCR Ski Chair reminded us the UCR ski day will take place on Friday March 3rd at the Osler Bluff Ski Club. Hazel de Burgh, Street Survival School Co-Chair, pitched the two events that we are planning in 2017. About 100 “I.O.U. Gift Certificates” were distributed to members at the holiday social, so they can give them out as Christmas presents to young drivers with G or G2-licences and less than 10 years of driving experience. When the two dates of the school are announced, the certificate giver can register on behalf of the young driver and pay $75.00 online, so the young driver can go for a full day of driver training in a safe and controlled environment. See https://pcaucr.org/ driving/street-survival-school/ for more information. 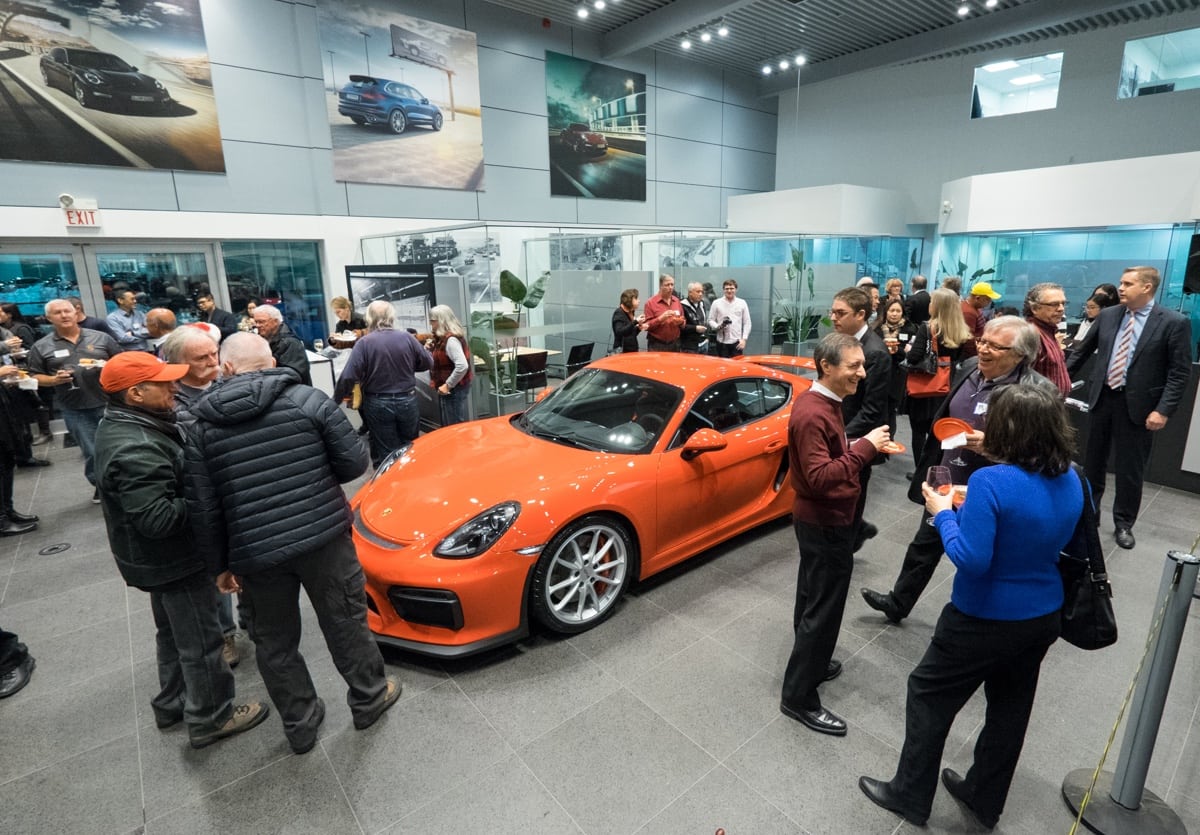 Kathleen closed the evening by thanking Pfaff Porsche’s for their hospitality. She also thanked Kim Viney for helping with the online registration, Michelle Zhang- Gananathan and her nephew, Alex, and two family friends, Jenny and Yuki, for helping at the registration desk. She wished everyone a Happy Holiday, and good Health and Wealth in 2017.