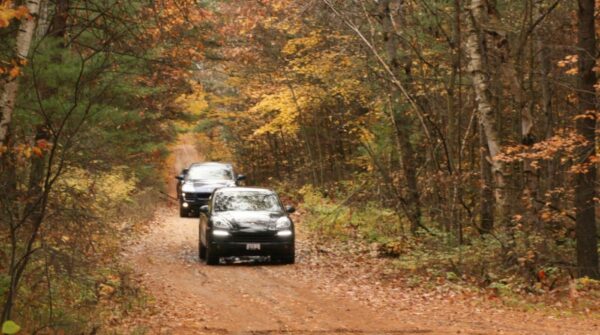 By Steven Revoy and Jill Clements-Baartman 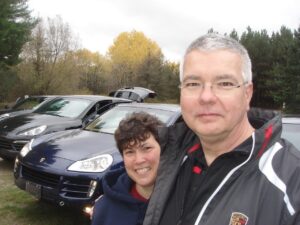 The hosts of the event; Jill Clements-Baartman and Steve Revoy; Photo By Phil Downe

The Cayenne is now Porsche’s top selling vehicle, worldwide. With that in mind, and the fact that many UCR members count the Cayenne as their Porsche of choice, the UCR Board has been throwing around ideas for special activities to involve the Cayenne and its unique capabilities for some time. This fall, the idea of the UCR OffRoad Fun Run was born.

On Saturday, October 20th, Steven Revoy and Jill Clements-Baartman hosted the first UCR Off-Road Fun Run at Ganaraska Forest Conservation Area, half an hour southeast of Canadian Tire Motorsport Park. While initial reaction from the membership to the event was very strong, a few participants decided not to show, due to the inclement weather that day. 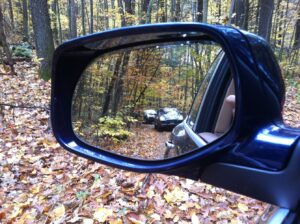 Under autumn skies, five Cayennes ventured out into the Ganaraska Forest for the inaugural UCR Off-Road Fun Run. Ten club members and two eager children navigated their way up hills, down dales, and across varied terrain in the conservation area. The 90-minute off-road adventure covered approximately 20 km.

The trails were blanketed with glistening yellow leaves, and pine needles wafted down from the trees towering above. The serenity of the scene was deceptive, however, as the wet leaves and soft soil challenged the capabilities of the Cayennes, which proceeded in low gear. The tree-canopied trails were wet and slippery with a multitude of muddy puddles to playfully navigate through. While the off-roaders got turned around a few times in the deep woods due to navigational errors, they were able to make it back to the base camp, a bit dirtier than they started, but unscathed.

With smiles and chuckles, the highlights of the morning’s ride were shared as Steve & Jill, Phil & Vika, Winnie & Greg, Susan & Greg and Eddie & Enza with their children Matthew and Emily, shared a picnic lunch and enjoyed the warmth of the sun, which finally shone through the colourful canopy. The kids could not sit still, with the lure of the rocks, pinecones, mushrooms and open fields. After a Nutella sandwich, they were off to independently explore the conservation area.

Some Suggestions from the UCR Off-Road Team for 2013 and Beyond:

• Expanding activities based on UCR members’  interests and suggestions;

• Using the Ganaraska Conservation Centre, with  overnight accommodations, as a base-camp to  explore surrounding destinations;

• Having family days with hot dogs and  marshmallows roasted over an open fire and side trips to Treetop Adventures, Jungle Cat World and Docville’s Halloween Town;

Thanks go to the UCR Board and point man, director Horst Petermann, for encouraging the development of activities and events highlighting the unique appeal and capabilities of the Porsche SUV. We look forward to more great off-road adventures in 2013!