Ever since I can remember I’ve been a car “nut”. Growing up in a small town outside of Sudbury, Ontario, there were mostly cars from the “Big Three” manufacturers, with the odd VW Beetle thrown in. Somehow I must have come across a picture of the Porsche 911 and the love affair began. Once I moved to Toronto, I began to see more and more of these cars. Throughout my teens and as a young adult I started buying Porsche posters, diecast models and Porsche books. Never did I think even in my wildest dreams that I would someday own one. 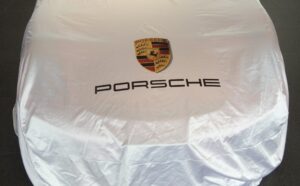 My first Porsche only came last year, in September 2014. I saw an ad on Auto Trader for a 2012 Cayman R at Porsche Centre Oakville. I decided to go ahead and inquire about this car, and was contacted by Nik Djordjevic, Sales Executive and Globally Certified Brand Ambassador at the Oakville dealership. I was wondering how I would ever go about paying for this machine. Well, at that time I had a 2010 Mitsubishi Ralliart tuned beautifully by a local wellknown tuner and a 2011 Evo, also tuned by the same fellow. I thought, why not trade both Mitsubishis in on the Porsche to make my payments somewhat affordable. And so, on September 13, 2014, at 67 years young, I finally joined the Porsche clan.

Along came February 4, 2015, and Porsche Canada announced a new car, the Porsche Cayman GT4. Nik emailed me that morning saying he had found the right car for me, sending me the Porsche Canada press release along with pictures of the GT4. Fabulous car, I thought, but looked to be out of my price range. Later that morning I phoned Nik and he ultimately convinced me to put down a refundable deposit on this car. Turns out they were guaranteed a small allotment and I lucked into that group! And the rest is history.

The wait began and—eventually—on August 5 of this year I got THE call! My Guards Red GT4 had arrived at the dealership! A PCA UCR friend picked up my stepson and I in Whitby the morning of August 8 and drove us to Oakville to meet my new car. My appointment was scheduled for 11:30 with Matt Pedev, Porsche Product Specialist—the first dealer based, Germany-trained product specialist in Canada and USA who not only delivers every Porsche sold by Porsche Centre Oakville, but also remains the technical go-to person for customers after delivery. 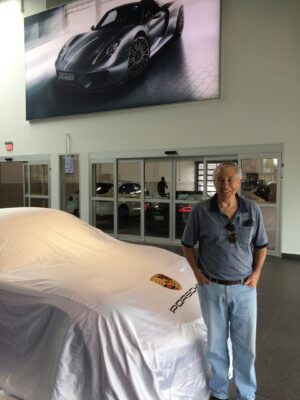 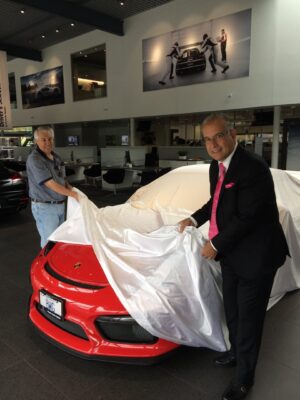 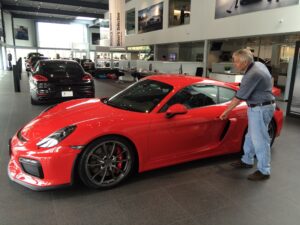 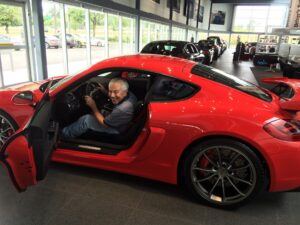 We were greeted and warmly welcomed by Nik and Matthew, my car was covered-up, and Nik played Best Man assisting me with the unveiling, the lifting of the bridal veil if you may, to fully reveal the beauty beneath. Photographs, catalogs and even the videos online don’t do justice to the real thing! A sight to behold and inside, those 918 composite bucket seats, yellow needles on gauges, the belt strap door openers, Alacantra™ suede leather like material all around, brushed aluminum trim, Man! Everything screams motorsports, even the imperious 385 hp mid mount coupled to the sport exhaust, a button I plan to use regularly!

I had almost memorized the electronic version of the GT4 Owners Manual while waiting and dreaming of this machine, but Matthew was able to give me practical and useful hints on vehicle operation and the nuances and differences from my first Cayman R. Eventually he pulled the car outside after completing all the paperwork for my long journey of enjoying this awesome machine. Porsche Centre Oakville exceeded my car buying experience in every imaginable way. 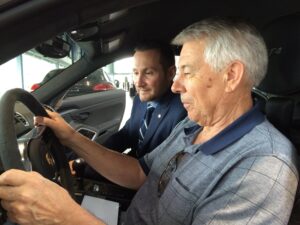 Driving off from Porsche Centre Oakville, my thoughts drifted back through life, through all my years of Porsche dreams and I’ve never had a better experience spending so much money and the car is everything I would have expected from a Porsche of this caliber. The light weight buckets from the 918 are simply fantastic, as is the smaller diameter steering wheel. The 6-speed gearbox is terrific and will only get better. The ride is more than comfortable on the street and the exhaust sound is, well, terrific. My GT4 looks absolutely beautiful sitting in my garage. I think I’m in love!