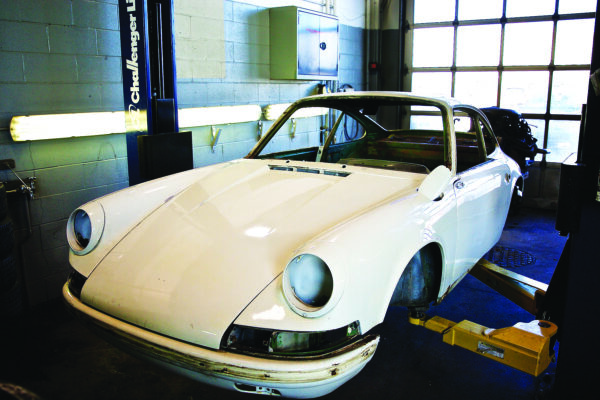 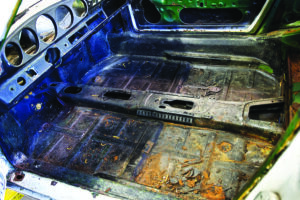 As a large company growing larger all of the time, Pfaff Auto Group need not turn a profit with every transaction. Sometimes building the brand trumps the bottom line.

The ’77 Targa soon disappeared from the Pfaff lineup, deemed as dispensable as the fifth player in a Toronto Maple Leafs trade. A customer made it his project car.

The ‘72 911T, the key to the deal, was much too special to be flipped. Rather, it is in the process of becoming a showpiece for the new Pfaff Porsche dealership facility that’s to open next spring – where it will assume pride of place as a shimmering metallic green symbol of a long 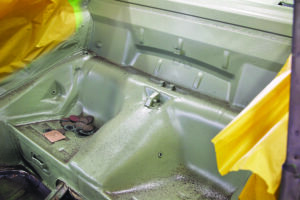 history of selling and servicing Porsches that began in the 1950’s with Hans Pfaff as sales manager at Volkswagen Yonge.

This Provinz series traces the car’s long road travelled. Part One in the June issue of Provinz opened with Kroll driving the 911T home from California in 1984, anticipating it would fetch a good price in Toronto. Except, neither it nor the ’77 Targa ever sold. They languished in Kroll’s condo basement for much of a decade after he retired. 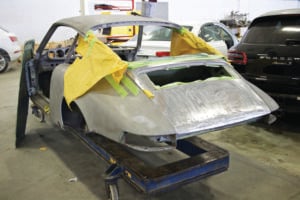 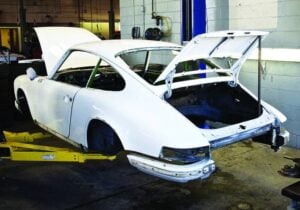 “Some would have looked at the amount of corrosion in this car and say it should be scrapped,” John Pera, Pfaff Porsche’s pre-owned manager explains, “but its rarity absorbed me – special order paint, the oil filler outside, the Sportomatic transmission a rarity as well and actually absorbed me in a dream.

“With this dealership’s DNA, we are fully capable of restoring a car like this. From Chris Pfaff (the founder’s son) on down, we all believe there is nothing we can’t do. Seeing it in our showroom, customers will realize they can rely on us, whether for routine service or collision repair.”

On arrival, the car itself impressed as anxious to get going. With fresh gasoline and a full 12 volts, Draganac, a specialist in older Porsches, promptly toured Auto Park Circle, Woodbridge’s concentration of high-end dealerships at 400 and Seven, “and that was Step One, learning we had a running powertrain,” Pera says. 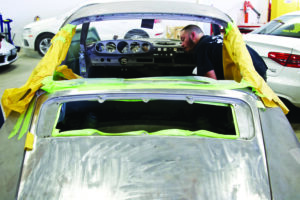 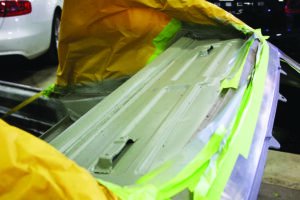 Next stop was Boot Hill Automotive Resurrection, Blaine Schmidt’s shop at Erin, Ont., to rid the body panels and undercarriage of the perfidious corrosion. Schmidt explains the process, which can cost $2-3,000 for a car the size of a 911.

“Typically we think of a car this size as a four-and-eight job,” he explains. “Four hours of plastic media blasting of the body panels, eight hours with aluminium oxide underneath.”  The latter requires more time as the oxide media “bounces back in your face.”

Eshel Zweig’s accompanying photos of big, gaping cavities and ragged edges document the success of Boot Hill’s indelicate surgery. Even so, when the car arrived at Pfaff Autoworks in Vaughan, apprentices and body technicians Jordan Singer and Glendon Co, needed to dig deeper.

Any paleontologist chips away at a ton of rock on the way to discovery. Singer, 25, and Co, 26, spent their days heating and chiseling decades-old undercoat and accu­mulated crud from those crevices the Boot Hill blasting couldn’t touch. Between them, 100-plus hours with not a fossil to show for it, but precious knowledge gained.

“One component of this restoration is developing the apprentices’ understanding of Porsche DNA, Jeff Pabst, Autoworks general manager explains. “Jordan and Glen are doing all of the restoration work – under the supervi­sion of shop foreman Robert Gargaro, a Porsche certified body technician.”

While their work continued, new doors and fenders ordered from Porsche Classic arrived from Germany in two weeks, at a cost of some $2,500. The floor pan and associated panels came from Stoddard NLA, LLC, of Highland Heights, Ohio. The long-established source of restoration needs sells complete floor pan kits for $901 U.S. (a felicitous price considering the 911 originally was designated Type 901).

Worth noting, nothing came wholesale. What’s more, Pfaff’s businesses bill each other at the going rate – $75 an hour in the case of the body shop. As this was written Pabst estimated Autoworks had 800 hours in the car, thus totaling $60,000 in labour.  At Porsche’s own Classic Workshop at Freiberg am Neckar, by the way, the hourly rate is 125 Euros or $180.97 at current conversion. 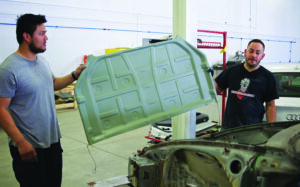 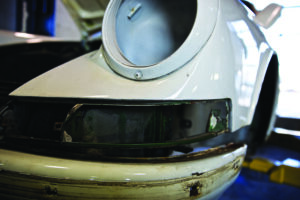 Installing all of the above and repairing areas damaged by corrosion such as at the base of the windshield A-pillars, continued as this story was completed in August. “It’s like a home renovation, you open up the walls and you discover more to do,” Pera said, pointing to the rear parcel shelf’s dete­rioration from accumulated moisture that came to light when the interior was stripped of upholstery.

Pfaff’s timetable calls for the 911T to leave Au­toworks in November. The new doors and engine and trunk hoods were to be fitted, then removed for painting (the same day as the body, to assure the same temperature and humidity), then reinstalled with gaps correct, in the final stages before the car is returned to Pfaff Porsche’s Service Department in Vaughan.

Still to come: mechanical, electrical, upholstery. Provinz will continue chronicling the 911T’s rebirth all the way to the showroom floor.

Previous articleThe Baby Has Arrived! Porsche Macan: The Little Tiger
Next articleHow Fat is Fat, How Wide is Wide… How bad is a 934?