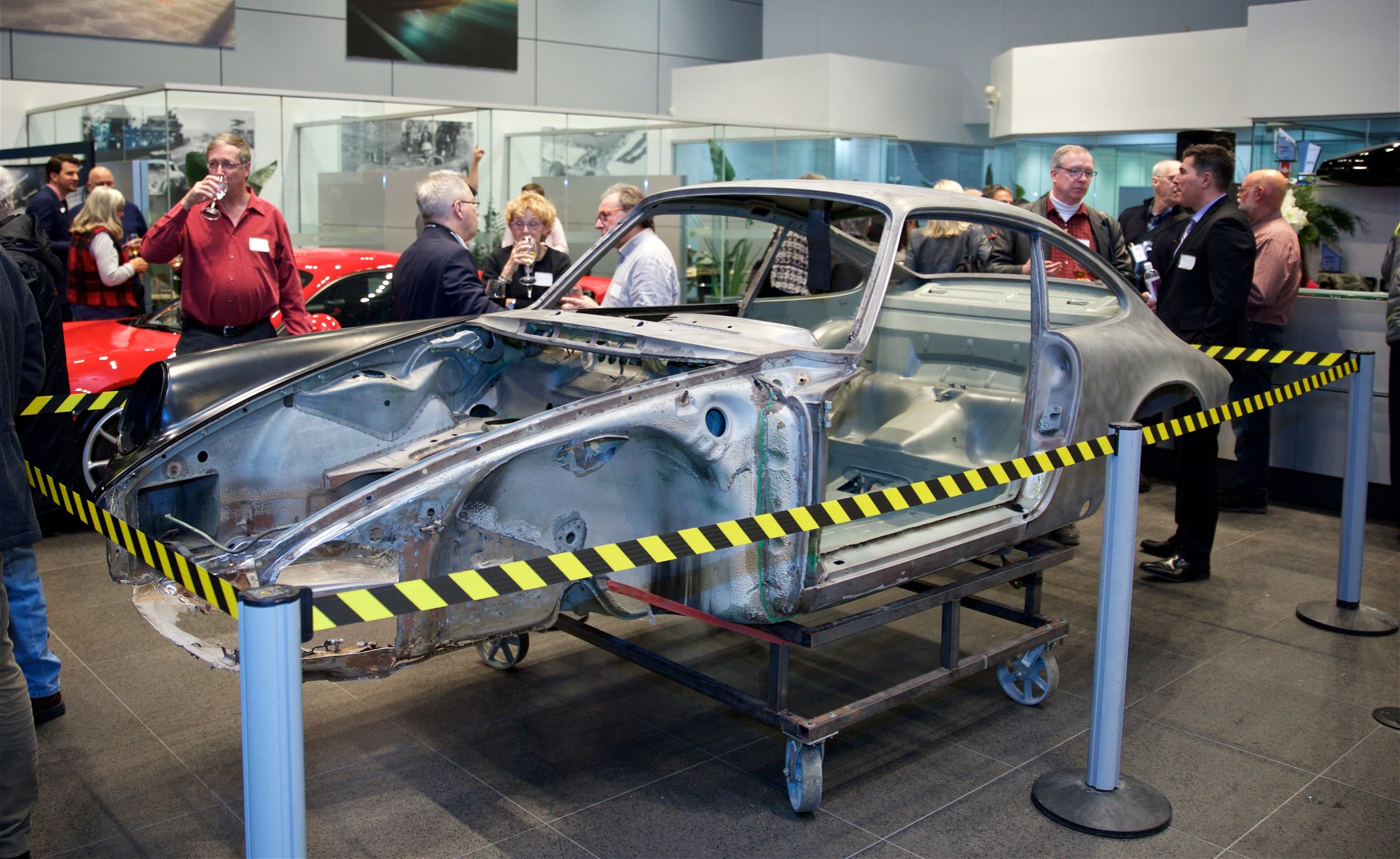 You’ve heard of Murphy’s Law. Well, anyone contemplating setting out to make an old car new again needs to know about Amos’s Law.

Amos’s Law: it’s going to take longer than you think. A corollary: the question will arise at some point, “How much longer?” 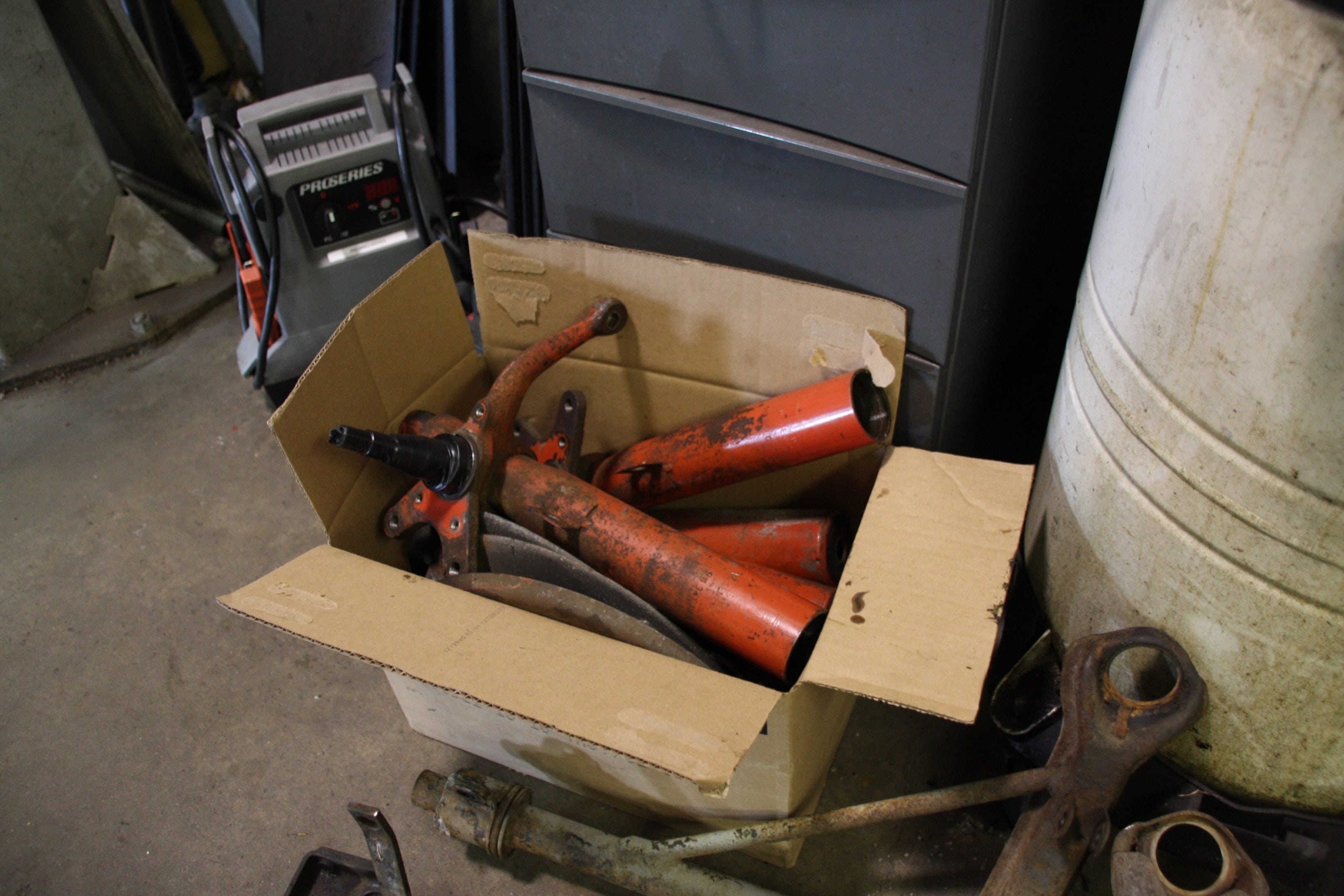 Boxes of shocks and other parts that Dave has disassembled

The late Amos Kromminga was the bodyman at Kroll’s Auto Service in the 1970s and 80s, restoring my 356B, twice(!), and each time taking months longer than anticipated. At the time I blamed the bitters that Amos sipped as a digestive after lunch, but decades later I’ve come to realize that almost every restoration, no matter how professional the operation, runs late! Thus the adage, Amos’s Law. 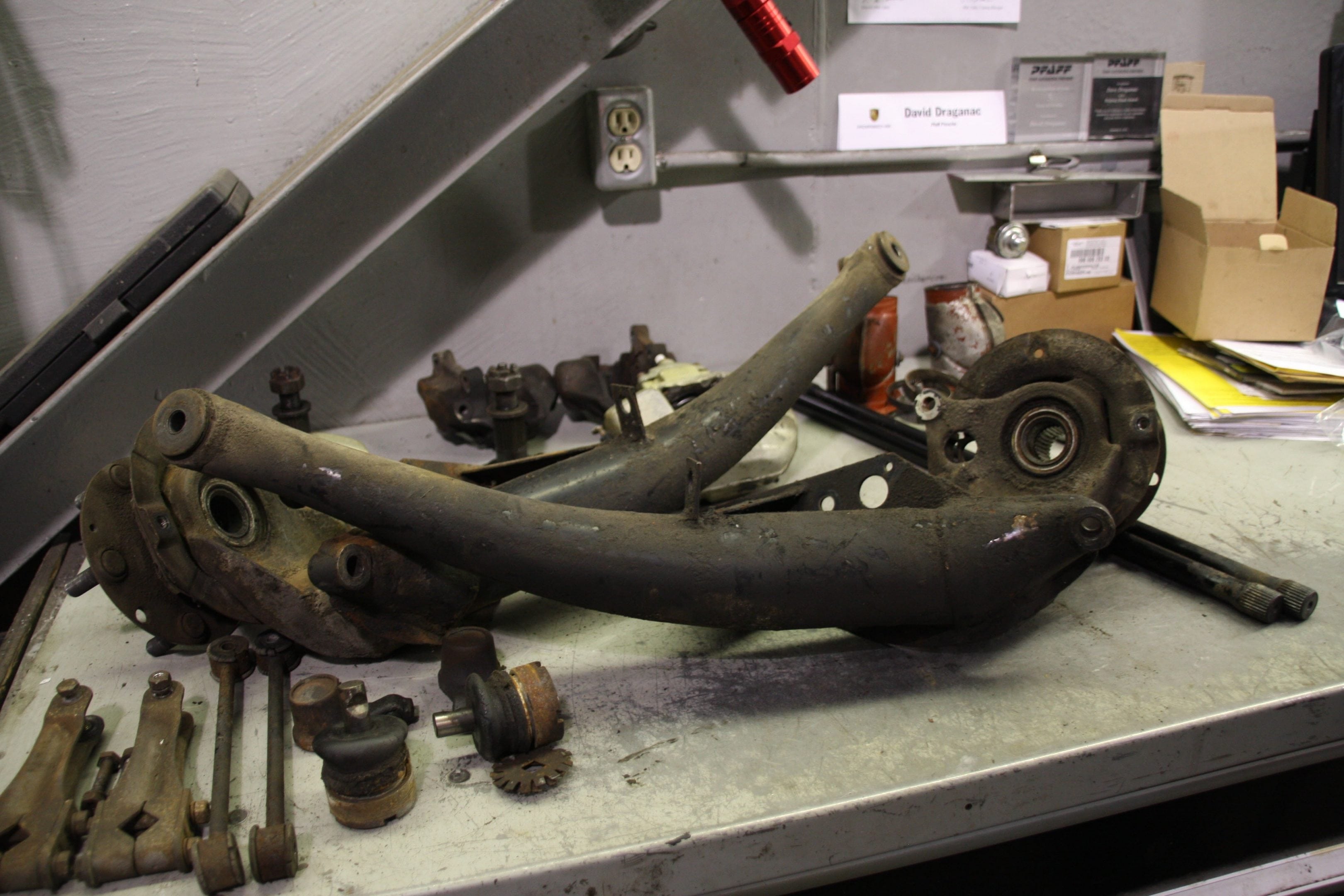 By comparison, the mechanical side of the restoration hummed along. The focus of this month’s reportage actually relates to the intensity of work involved in cataloguing what needed fixing, ordering replacement parts, and reassembly. But all that was transpiring at Pfaff Autoworks in Concord reminded me of the flexibility that is required in adjusting to the realities of another day at the bodyshop.

When Part III of this series appeared in October, the end of November was the target for the restored body to arrive at the Pfaff Porsche service building in Woodbridge.

By then, it was to have been freshly painted in its original special-order Metallic Green, ready for the installation of all the mechanical and electrical moving parts. Didn’t happen.

When your reporter huddled mid-November with service manager Mike McCarthy, geriatric specialist tech Dave Draganac, and John Pera—the Pre-Owned manager who was the starting quarterback when Pfaff committed to this 911T project—an updated goal was agreed: the body would be transferred before the Christmas break. 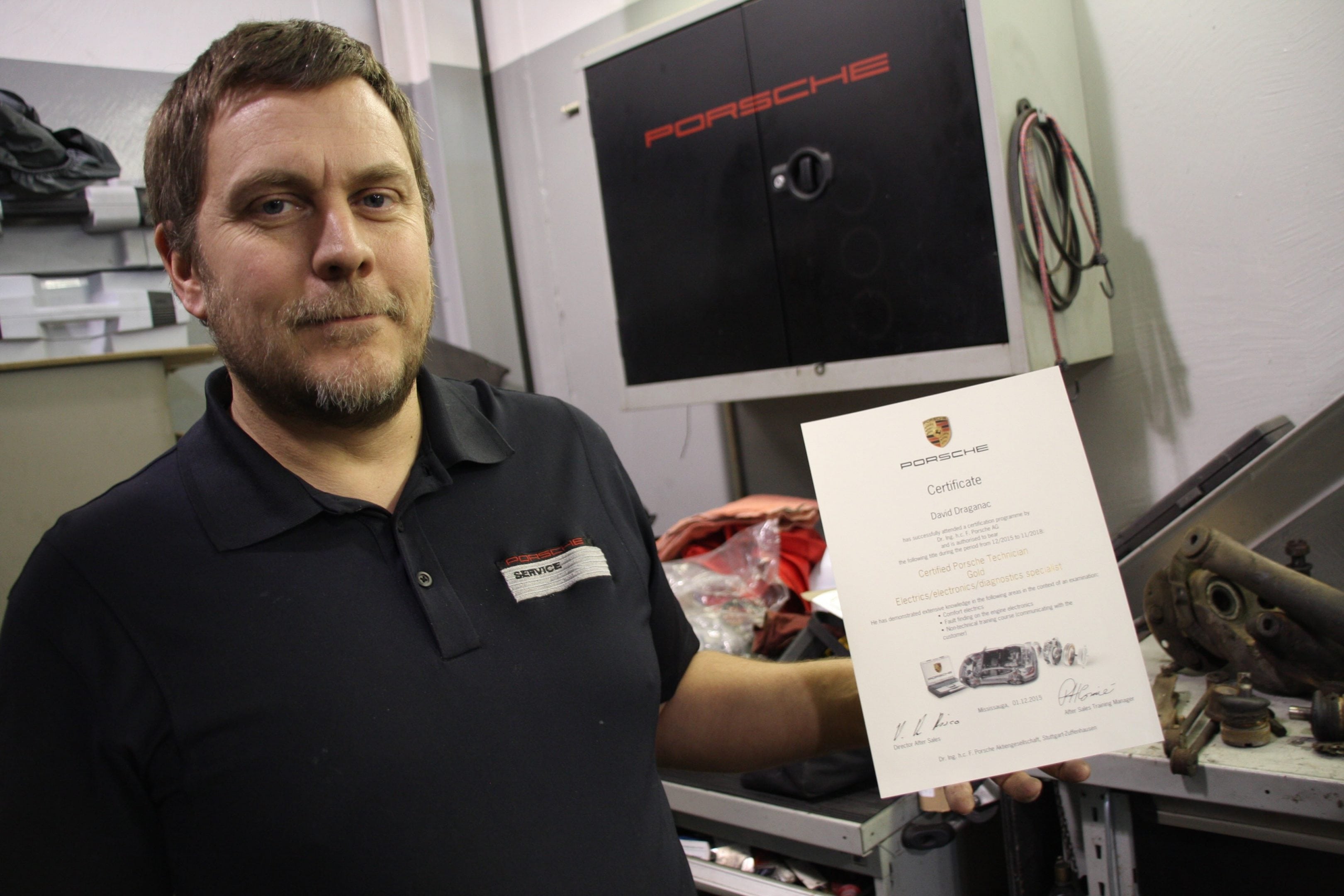 A week later, a meeting of Pfaff’s classic car brain trust addressed the possibility of the body not emerging before the end of January.

Why? As Amos’s Law dictates, a lot of littles add up to a lot. For instance, fitting the new doors from Porsche Classic… the hinges didn’t line up. Compounding matters, the bodyshop was jammed with collision work all autumn. Apprentice body techs Jordan Singer and Glendon Co, who’d been assigned to the project to immerse them in Porsche DNA, have been coming in on the weekend to try to get the 911T back on schedule.

How much longer? There’s not much time to spare, for Pfaff’s splendid new dealership, one of the largest in North America at more than 100,000 square feet, is to open in May with the 911T a planned centrepiece in the showroom. So, time will tell.

On the mechanical side, however, by November, Mike McCarthy had already tackled the 911T’s 2.4-litre block, that now has new pistons and cylinders. New injectors were installed in the mechanical fuel injection system that makes these 1970s engines so special, its precious fuel pump having been checked out.

McCarthy’s knowledge of mechanical fuel injectors goes back to the time when it was the post-carburetor 911 norm. The places McCarthy worked in his early days— Gunther Decker’s, Willie’s Downtown Porsche, then Kroll’s between 1976 and 1979—were hardcore racing shops that attracted the most fanatical of Porsche owners. 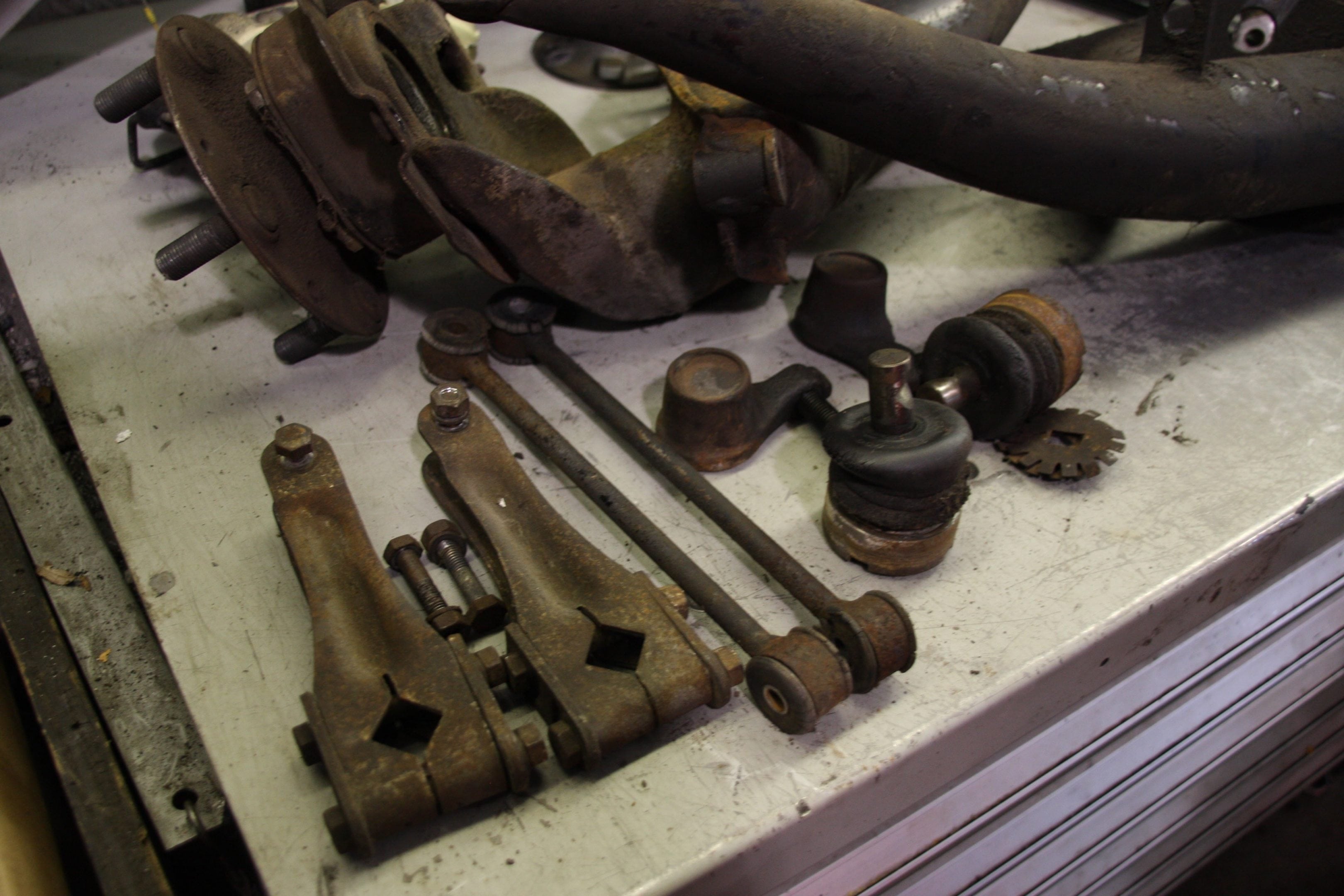 Draganac, being younger, got into the business starting as a yard worker at a General Motors dealership. Correcting a Saab computer glitch opened the door to his becoming a technician; years later, puzzling his way through Porsche eccentricities followed naturally. He now has completed four of six training courses that Porsche North America offers to candidates judged to be worthy of schooling in classic Porsche repair.

“I’ve listed every nut bolt and screw,” Draganac proudly says in describing the effort spent on disassembly. “In each case, a decision has to be made whether to source new parts or restore old parts. Next, I’m going to place all of the parts on shelves I’m bringing in, placing them in the order that they’ll be installed on the body, once it arrives.

“Early on I looked into plating bolts and parts in-house because I liked that idea, but I’ve redecided that, due to environmental concerns. I don’t want to hazard my health or anyone else’s.”

In early December, Draganac was still occupied with seeking out a capable specialist to plate the sway bar brackets, as one example, to match the 911T’s factory standard. In a sense, it was a learning experience. In the future, the restoration customers Pfaff intends to attract will profit from the all that has gone into the Kroll 911T. 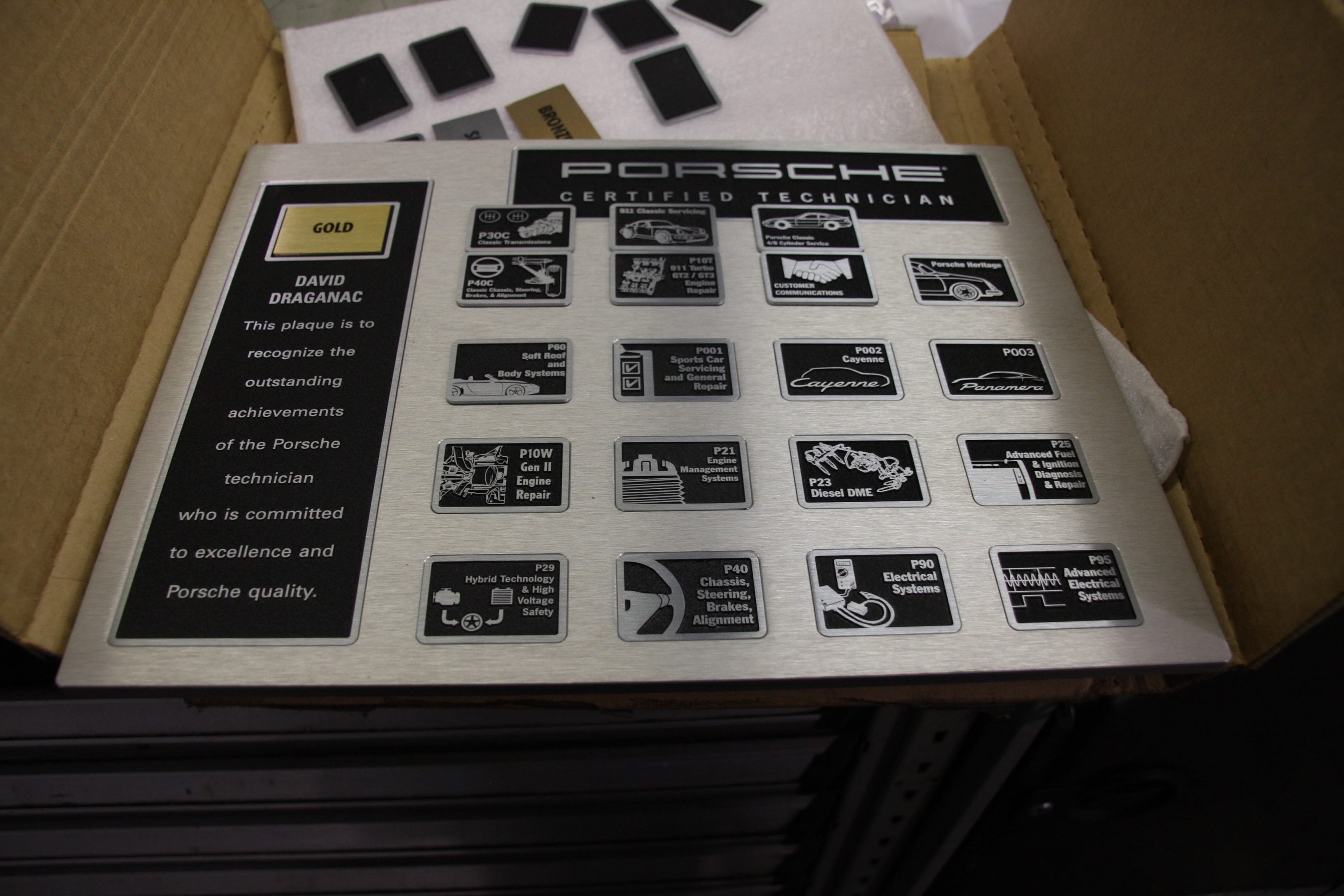 Dave is justly proud of his training and qualifications

“I’ve revisited the rubber hoses,” he continues. “The situation there was a little worse than I first thought. Every single hose—be it fuel, vacuum or evaporative emission—was rotten. You go to coil them up, and they crack or break in two. All need to be replaced.”

Taking apart every component of the 911 kept him busy for weeks. When we talked, the rear control arms were on his bench, degreased in preparation for being sent out for blasting, prior to proper refinishing. A box of miscellaneous parts awaited plating.

The Sportomatic automated manual transmission— the four-speed the driver shifts without a clutch pedal, or doesn’t shift if he or she chooses to simply engage fourth—awaited his inspection. Actually quite simple in its operation, a solenoid engages the clutch when the driver touches the gearshift. The Sportomatic’s durability was proven in endurance racing. Problem was, they were notorious for leaking… another challenge for Draganac and McCarthy. 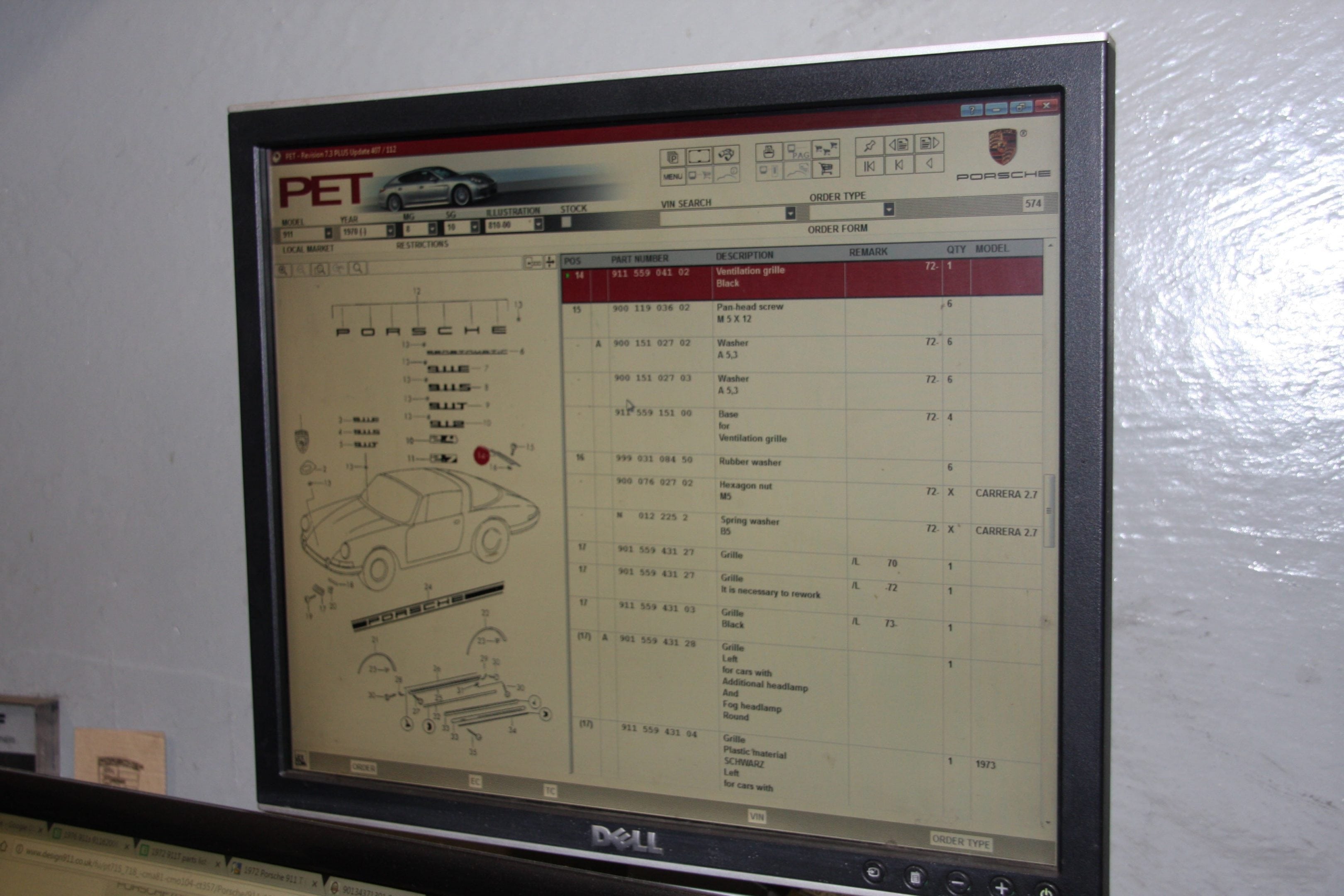 The hours mounted. Pfaff’s accounting charged the same $159 per hour shop rate that they would any other customer. Draganac had logged 93 hours when we talked; he might top 200 by the end of the job. His estimate just for parts was in excess of $20,000—and all this exclusive of what was transpiring over at Pfaff Autoworks.

Pfaff took on the project considering it an investment. “This is going to be our resume,” Draganac says. “We’re not cutting corners. We’re demonstrating what we are capable of accomplishing with any car that a customer brings to us for restoration.”