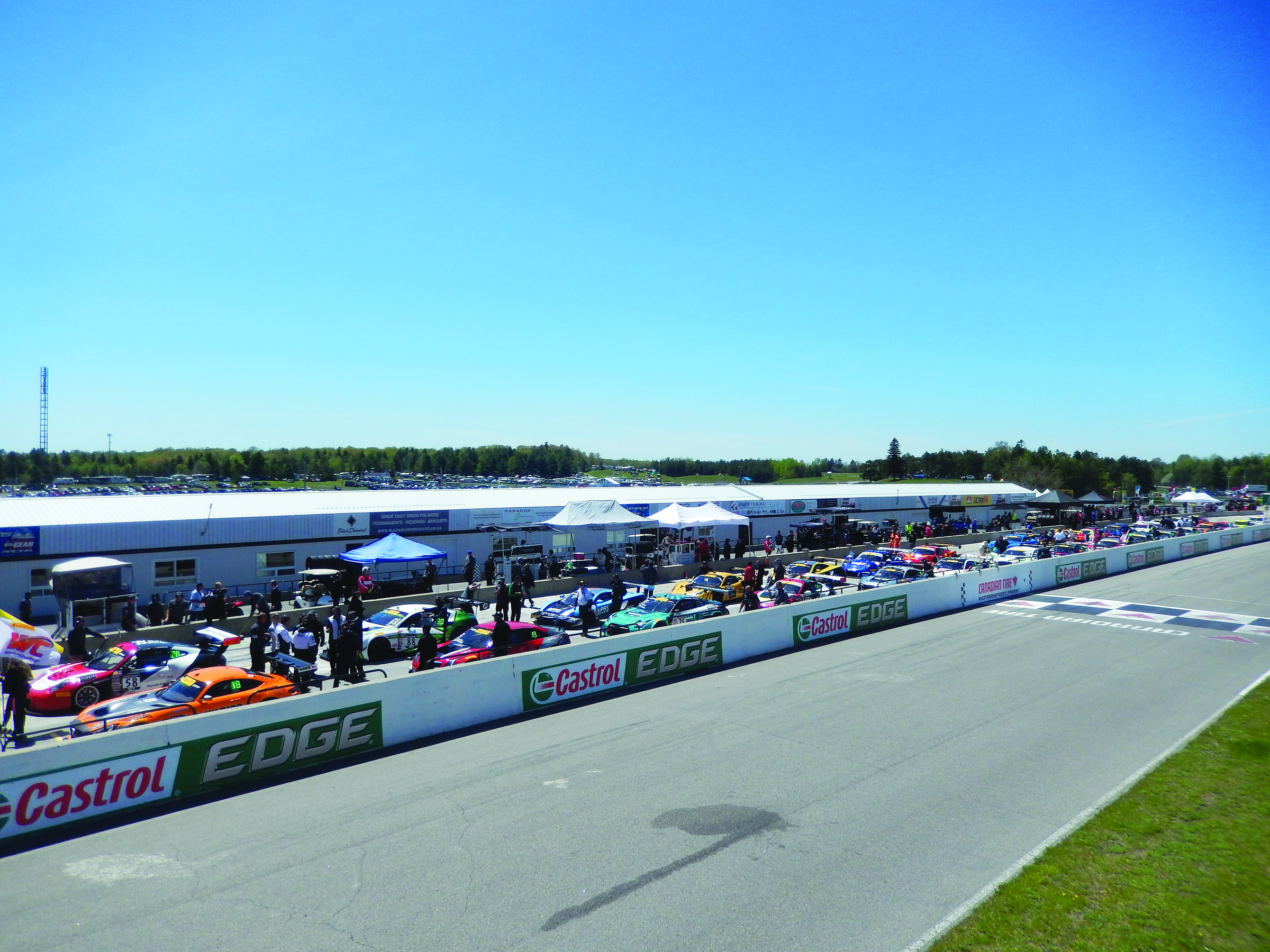 After more than an eight month wait, race fans eagerly welcomed back the Ultra 94 GT3 Cup Challenge Canada by Yokohama as the series dropped the green flag for round one and two at Canadian Tire Motorsport Park (CTMP) in Bowmanville, Ontario.

Round 1 featured a flag-to-flag victory by Scott Hargrove in the No. 9 Castrol-Pfaff Motorsports entry, followed by Zacharie Robichon of Mark Motors Racing and series newcomer Remo Ruscitti in the OpenRoad Racing entry.

Round 2 was another flag-to-flag victory by Scott Hargrove, with multiple passes behind him for an exciting race that witnessed Zacharie Robichon finish second and Michael de Quesada in the Alegra Motorsports No. 31 Platinum Cup car round out the podium.

De Angelis earned the top step in both opening races

Gold Cup results for Rounds 1 and 2 saw Roman De Angelis in the No. 78 entry of Mark Motors Racing entry on the top step of the podium and Orey Fidani in his No. 13 Orlando Corporation/Pfaff Motorsports entry finish in second in both races.

Enthusiasm was stronger than ever as a redeveloped GT3 Cup car was welcomed to the starting grid in the Platinum Cup while the previous generation GT3 Cup car now makes up the Gold Cup.

“It is inspiring to see the strength in the Ultra 94 Porsche GT3 Cup Challenge Canada by Yokohama continue to grow in the seventh annual season, also fueled by the new 911 GT3 Cup Car,” said Alexander Pollich, President & CEO, Porsche Cars Canada, Ltd. “Optimism, spirit, and excitement are overflowing as the teams and driving talent are all looking forward to the possibilities of the new season.”

The Ultra 94 Porsche GT3 Cup Challenge Canada by Yokohama competitors enjoyed some spirited competition Saturday as Round 1 of season competition kicked off at CTMP during the Castrol presents the Victoria Day SpeedFest.

Scott Hargrove, of Tsawwassen, BC, in his No. 9 Castrol-Pfaff Motorsports entry led the 16-car field from flag-to-flag to capture the overall and Platinum Cup victory. The 2014 Series Champion held off the No. 98 of Ottawa, ON, resident Zacharie Robichon of Mark Motors Racing by just over two seconds, and set the fastest lap in class on Lap 18 with a one-minute, 20.341 second lap on the technical 2.459-mile road course.

Robichon started the race in third position, but his opening gambit pushed him past the No. 31 of Michael de Quesada and Insync/Alegra Motorsports to slide into second place. He was immediately followed by series newcomer Remo Ruscitti from Vancouver, BC, in the No. 69 OpenRoad Racing entry and the two ran in lockstep throughout the 45-minute sprint to finish in second and third place in Platinum respectively.

Series veteran from Toronto, ON, Marco Cirone in the No. 88 Mark Motors Racing entry proved that he was once again on the championship hunt as he remained patient and consistent, gaining ground to round out the top five overall in Platinum and capture the Platinum Masters championship win.

Cirone was joined on the podium by second-place finisher Tim Sanderson in the No. 07 DFC Motorsport- Speedstar Motorsport entry representing Downtown Porsche and sponsor Harry Rosen.

De Angelis, in the No. 78 entry of Mark Motors Racing pushed his Gold entry into the thick of Platinum action running consistently in 10th overall or better throughout the race. The 16-year-old swapped positions several times with McKaigue as well as the No. 2 Platinum entry of Etienne Borgeat of Montréal, QC, running for Sesame/GT Racing. A native of Belle River, Ontario, De Angelis ultimately finished in eighth position overall and earned the Gold Cup victory.

Orey Fidani, of Woodbridge, ON, pushed his No. 13 Orlando Corporation/ Pfaff Motorsports entry into the tight line of Platinum traffic and maintained a consistent pace to take the second step on the Gold Cup podium.

Borgeat, who started in 10th position on the grid and ultimately finished in sixth, earned the Yokohama Hard Charger Award for advancing the most positions in Platinum Cup competition.

The Ultra 94 Porsche GT3 Cup Challenge Canada by Yokohama series competitors kept their cool Sunday at CTMP under the looming threat of rain to complete a superb 45-minute sprint to complete the Castrol Presents the Victoria Day SpeedFest weekend.

Scott Hargrove in the No. 9 Castrol- Pfaff Motorsports Platinum 911 GT3 Cup entry took his second overall and Platinum Cup victories and the points lead heading out of Rounds 1 and 2 of series competition. Hargrove once again led flag-to-flag, but the race was by no means quiet, as the field behind him continually shifted with multiple passes and battles for position.

Zacharie Robichon, running the No. 98 entry for Mark Motors started his race in third position, but made an aggressive pass early to gain a position on Remo Ruscitti in the No. 69 entry for OpenRoad Racing by Lap 2. He remained hard on Hargrove’s heels throughout the race and ultimately took the second position on the podium for his efforts.

Alegra Motorsports pilot Michael de Quesada in the No. 31 Platinum Cup car started fourth on the grid and patiently stalked Ruscitti until he was able to move up to finish third in class on Lap 10 when Ruscitti made a slight error on track and lost two positions.

Cirone and Sanderson each capture a Platinum Masters victory

The three waged a fierce fight from the drop of the green flag with Cirone and De Angelis swapping positions three times throughout the race. Ultimately, Cirone suffered a spin in Turn 10 on Lap 17, dropping positions and giving the Platinum Masters victory to Sanderson.

Etienne Borgeat in the No. 2 entry for GT Racing fell into step behind Sanderson with Shaun McKaigue in the No. 34 FER-Pal/Aqua Pipe Pfaff Motorsports car immediately behind him to finish in second and third place respectively in the Platinum Masters championship.

While the war raged on between Sanderson and De Angelis, it was De Angelis who ultimately snuck by Sanderson with a hard-won pass with just four laps remaining in the race, to take fifth place overall, the victory for Gold competition and the Yokohama Hard Charger Award for advancing the most number of positions in class during the race.

Orey Fidani, of Woodbridge, Ontario in the No. 13 Orlando Corporation entry for Pfaff Motorsports was forced to start in the back of the field due to technical issues, however, he quickly advanced throughout the field to finish in 11th overall and second place on the podium in Gold competition.

The Canadian competitors will return to CTMP for the season finale in September. CTMP is the only circuit that hosts two event weekends for the Ultra 94 Porsche GT3 Cup Challenge Canada by Yokohama. The final two rounds of the 12-round series take place during the Chevrolet Silverado 250 weekend on Sept. 1-3.

The next event on the six event, 12-race calendar is a series highlight – the Formula 1 Grand Prix du Canada – June 9-11 at Circuit Gilles-Villeneuve in Montréal, QC.

The Ultra 94 Porsche GT3 Cup Challenge by Yokohama season will be highlighted with four televised races on The Sports Networks (TSN), Réseau des sports (RDS), and Motorsport.tv in Europe.

For more information on the Ultra 94 Porsche GT3 Cup Challenge Canada by Yokohama, visit: www.imsa.com and follow @IMSA on Twitter with the hashtag #GT3CAN.

Porsche at the Geneva Motor Show 2012