Finally a tire to fit the bill… and the car 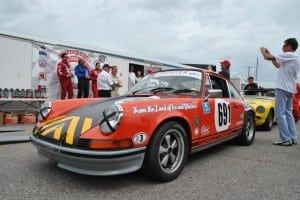 I have been competing in vintage racing events since around 1991, just three years after I first joined UCR and learned about performance driving in our fantastic DE program.

The first racecar was a 1968 911-L that I bought together with fellow member and friend, Greg Doff. We still own that car today. In fact, I will be running it at this year’s VARAC Vintage Racing Festival (now the Canadian Historic Grand Prix) on the weekend of June 15-16. VARAC is the Vintage Racing Association of Canada.

Through the 90s, Greg and I participated in 10 to 12 vintage racing events a season, mostly with SVRA (Sportscar Vintage Racing Association), up and down the eastern US and Canada, from Road America in Wisconsin, to Daytona Speedway in Florida. We went through trials with several different tires over the years, as one or another manufacturer would phase out their 15-inch tire or stop production of a competition type altogether. We even ventured into using bias ply tires but, aside from making the car slide all over the place, which is a fun but slow way to go, they were never quite the right size, usually being too tall for the car.

Meanwhile, SVRA allowed 50-series tires all along, and that was the tire aspect ratio that seemed to best suit our cars, but finding a good product was another matter. While we started out with one car, which we would share in endurance races or take turns in from event to event, there were later two and even three cars—all early 911s.

We took a break from vintage racing for a while around 2000, as we ran a Porsche in the ALMS for two seasons and I continued with a Lola-Nissan prototype for another, but when the large fortune was duly turned into a small one, we found our way back to it. We again took in the odd SVRA event but also focused more on running locally with our own racing organization, VARAC. There came a point when VARAC began to enforce rules that stipulated the use of 60-series tires for vintage and historic cars and we found ourselves with slim pickings in the marketplace and really only one product to choose from, which was available only in one width, while typically we put wider tires on the rear of the 911. These tires worked somewhat, but again, they weren’t quite the right size. 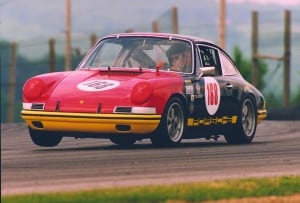 Then, a couple of years ago, VARAC decided to allow entrants’ cars to be classified in three different categories: to VARAC rules with 60-series tires, to SVRA rules allowing 50-series tires, and to FIA rules which stipulate narrower wheels and taller tires, just as back in the day when these cars were originally raced.

I immediately took advantage of this new set of rules and entered my 1969 911 as an SVRA-prepared car, seeing that I also raced with that organization anyway. Turns out there really aren’t very many competition tires that will fit our 15-inch Fuchs rims. That brought me around to trying the all-new Toyo R888 ©2013 Porsche Cars Canada, Ltd. Porsche recommends seat belt usage and observance of all traffic laws at all times. Proxes in late 2010. I loved this tire immediately, not only for its fantastic stick but also for its consistency, not only throughout a session, but throughout an entire racing weekend.

I found the pressures Toyo recommended for the weight of my car—just under 2,000lb—were dead-on and the tires worked for me immediately. Over the next few months, Toyo released further tips on pressures and temperatures, making it apparent they want their customers to be happy.

My first outing with these new tires on my ’69 car was with VARAC at Mosport in October, with pretty cold weather. Nonetheless, the tires performed very well on less-than-ideal track temperatures. The car was then stored for the winter and I made my way down to Sebring the following March to run in the historic races at the annual 12-Hour event there. Wow! With the heat down there and the very abrasive pavement at that storied track, these tires worked even better; they really loved the heat! Growth of the tires was very consistent all around at 5lb, with even temperatures across the tire. Pressures used were about 18 and 22lbs cold, while Toyo actually recommends 20 and 26lb for a car weighing 800 to 1,000kg. 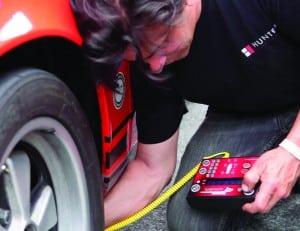 We typically don’t make suspension set-up changes during a race weekend, other than sway-bar tweaks, and those particularly for wet weather. There really isn’t a lot one can do with these older cars—once they’re set up well, that’s pretty much it. But with the Toyo R888 we find the tire is very responsive to even minute changes in the pressures to help us achieve the results we are looking for, and possibly lap time improvements of as much as two seconds at Mosport. These changes are largely based on ambient and track temperatures as well as track conditions.

I will be back in the ’68 911-L—the first in the stable— at Mosport for the VARAC Canadian Historic Grand Prix. I hope to see you there, and will report on my continued experiences with the Toyo R888 Proxes tire later on in the season.