Why I own a Cayenne

Click on any of the images for a full size view.

First of all, owning a Porsche has been a lifelong dream of mine ever since I saw my first Porsche in the mid-sixties. I have followed Porsches through time, always being envious of those who owned one. When I thought I was ready and able to buy one, I looked at new but couldn’t afford it, so I looked at used ones. I wanted a 911, but the practicality didn’t make sense to me, basically a two-seater and low to the ground, not practical in winter. So I started to look at Cayennes and fell in love with them. I took a couple of them out for spirited test drives and was amazed at how well they handled, and they were comfortable to boot!! Once I decided it was just a matter of paperwork.

I joined the PCA UCR with the hopes of meeting people with the same Porsche passion that I have. WOW, what a group of great people. At first a few made jokes about a Cayenne not being a real Porsche, but I argued that it indeed was. To me we are all just car guys and gals. 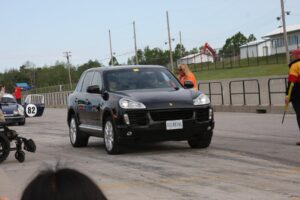 I attended the UCR IDS in April 2012, getting looks and snickers from other new Porsche owners, but I didn’t care. I was amazed, and so were the instructors, at how well the Cayenne handled every aspect of the IDS program. It’s really amazing at how fast this big vehicle can stop when needed. I then signed up for the DE program in May. I was informed that I was the second person to attend a DE day with a Cayenne. What a blast! I had a lot of fun at CTMP, and boy can this vehicle handle! I learned a lot from great instructors who were also impressed at how well it handled.

Why do I own one? Well, for me it’s not too complicated. I love the brand, I love the looks and I love the versatility of the vehicle. I also love the ooohs and ahhhs I get from people. Carrying five adults in comfort or hauling cargo (that wouldn’t fit in a 911), navigating a rough cottage road or trudging through the snow, the Cayenne fits the bill.

Now as an active member of UCR, I have been asked to put together Fun Runs for the Cayenne owners of the club. And, just from looking in Provinz every month I see a lot of new members with Cayennes. We had our first event last fall at Ganaraska Forest. Six vehicles, with 14 participants came out. We did some mild off-roading, so as not put the vehicles at risk. We got our vehicles dirty but that was about it. Everyone had a great time.

The story in the January issue of Provinz, by Kathrin Menge, of her experience with a new Cayenne’s delivery expresses a passion that I share, as I am sure many others do. Also in the same issue, Emily’s article, Going Alone, in her column, Objects of Desire, so completely describes how I feel about driving and I’m sure I’m not alone.

Cayenne owners can attend any club event and participate, but most seem to be shy and think they aren’t welcome. Au contraire! A Porsche owner is a Porsche owner. We all love the vehicles from the 356 to the new Macan.