Trying really hard at turn 17 – two wheels on my wagon

It is hot. Not just ordinary, common or garden variety hot, more of the vindaloo varietal really. With humid­ity to boot. I am at the track yet again and Sebring is awash in activity as preparations are well underway for the famous 12 Hour race, practice commences in two days. I have experienced Sebring in late April when the humidex reached 117°F and it was none too pleasant. Back then I had a 997 Turbo S with wonderful AC and cooled seats. Now I have Martini, no AC, solid seats, no interior comforts at all in fact. Save one. A couple of tubes that ap­pear from the tunnel and attach to my Cool Shirt. Flick the “COOL SHIRT” switch on the dashboard and it provokes in me a reaction not entirely dissimilar to that famous diner scene performance by Meg Ryan in When Harry Met Sally. Yep, it is that good. I cannot ad­equately describe the sensation of relief as the ice water surges around those little tubes sewn onto the shirt. This day that shirt is without doubt the single most effective item in the car for producing fast clean laps of the 3.7-mile circuit. I am no doctor but know first-hand how debilitating heat stress can be – so avoiding it by drinking plenty of fluids, replacing electrolytes and keeping your core cool is my number one priority as we get into spring down here.

Audi had some nice cars there – we did our best to keep them in their place!

I am at an event that is new to me, a David Murry Track Days [DMTD] weekend. It is open to drivers with substantial track experience and is run as an HPDE non-competitive event. The track goes hot at 08.30 and remains that way until noon when there is normally an hour lunch break followed by a further 3.5 hours of open track. I mentioned ‘normally’ because this weekend David is trying something new; a fair size herd (I think herd is an appropriate collective noun for the prancing horse) of Ferrari Challenge cars are here and will be running through the day. At the bar in the hotel the previous evening rumours had been rife that these cars would be having a race at some point and, horror of horrors, qualifying would take place during our event. Well, yes and no. Qualifying took place on the Saturday lunchtime and races Saturday after the HPDE closed and again on Sunday lunchtime. Still, it was a little intimidating to see the large expensive team set-ups for the Italian cars together with a smattering of 911 Cups.

DMTD do not require a tech inspection at the track or a tech sheet to be completed by a licensed mechanic beforehand. There is no explanation of flags – the expectation is that you will know them, intimately. At 08.00 there is a driver’s meeting which is mandatory and coaches are also required to attend. The meeting is short, to the point and simple with the overarching message being that we are all responsible for our own and other’s safety and this is to be a well-mannered and enjoyable event. Point bys are not required on straightaways but are required in corners and passing is completely unrestricted. Quite the recipe for excitement then. Particularly with a bunch of brightly coloured 360s and 458s in attendance.

The dynamic for this event is quite different from what you experience at PCA, Chin, BMW Club or similar events. Exit from the drivers meeting was leisurely – but then there were no run groups with defined times so nobody was in a hurry to get to a run group – or to be the guy drying the track for everyone else! 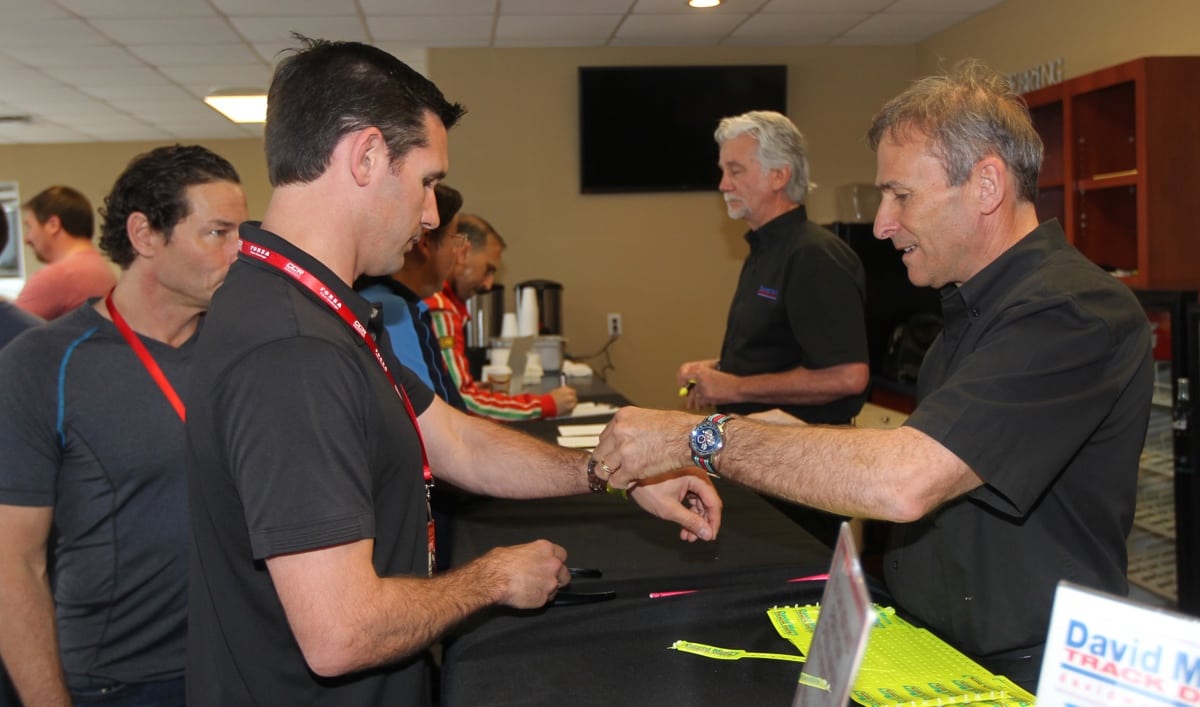 The scene at sign-in, just before the driver’s meeting. David Murray is front right (wearing my watch) and Mark Taylor’s in the right rear with the beard

This weekend I had a friend of mine come up to the track from Naples, he is a retired 747 captain with decades of flying under his belt but zero time in a race car. We both thought it would be interesting for him to compare procedures, checklists etc. Well, he arrived very punctually and at our precise rendezvous point – which was exactly what I expected. I proceeded to loan him a proper long-sleeved top and really didn’t think too much before answering his question about what made it ‘proper’ – “Oh, it is flame retardant”. He looked a little taken aback but I thought nothing of it.  Then I fitted him with a full face helmet and checked the intercom. Charles didn’t look too thrilled but said nothing except to ask how the straps un­fastened if necessary. Then came time to get him into the car. The crew helped him negotiate the roll cage but it was a bit of a struggle as he is quite tall and not as flexible as he once was, I guess. At one point, one of them was literally pushing his helmeted head through the frame opening. Then came the full-harness seat belts. Well, they would have done had poor Charles not had a complete panic attack and ejected himself from the cockpit with far more alacrity than had been evident a short while earlier upon entry! I helped with his helmet removal and he explained that he just ‘couldn’t do it’ and went on to explain that he hated the feeling of having no control and no easy exit in the event of emergency – such as having a heart attack! Which of course I found quite deliciously ironic and felt the need to point out that for decades he had subjected 300 plus souls sitting behind his cockpit to exactly the same emotions – no control and no way out if something went wrong! In the end Charles returned to Naples without venturing onto the track, a shame. Next time I sit on the tarmac at YYZ listening to the engines spooling up before the brakes are released I will inevitably be thinking of Charles leaping from Martini – and chuckling! 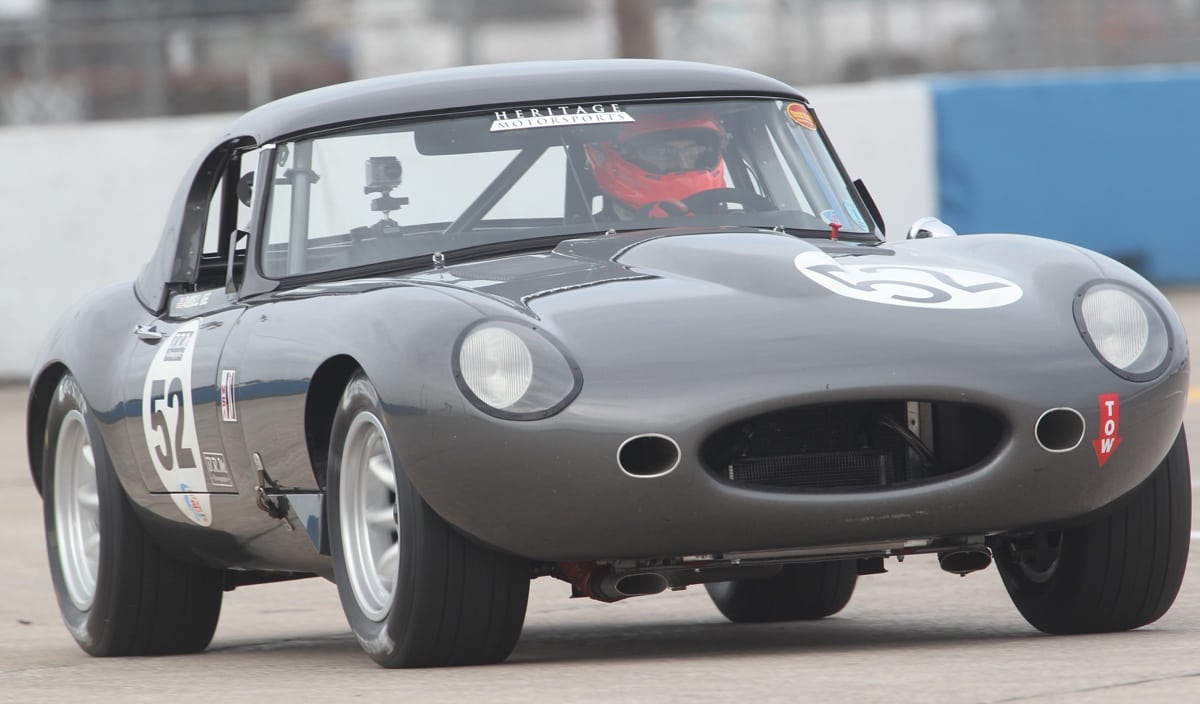 The action out on track was excellent. The no-nonsense pep talk given at the driver’s meeting by Mark Taylor had clearly sunk in and everyone was exceedingly polite, responsive to traffic coming up and drove well. Through­out the entire weekend there were just a small handful of full-course black flags for mechanical failures. In fact, it was one of the most incident free weekend events I have ever attended.

Over breakfast the second day I had a chat with David and Mark about their events and asked what they found to be the biggest headache when trying to run things smoothly. Unsurprisingly, they both find the increasing tendency of racers and race teams to use HPDEs as test and tune events to be problematic if – and the emphasis is on if – those teams and drivers have a different agenda than that of the event overall. In a recent case that exact scenario reared its head but just as quickly disappeared when several entrants were invited to go home. Like the rest of us David and Mark want their customers to have safe and en­joyable fun and on occasion that requires some very strict attitude adjustment.

Would I register for another DMTD event? In a heartbeat. It has, as I noted above, a very different feel to the tradi­tional HPDE that is split into rigid run groups. My view, for what it is worth, is that a DMTD event provides more [much more] track time and potentially more of that time is useable in the event you run into a technical problem with your car. The social scene is more limited because there is no natural grouping of participants into their respective groups. Let’s face it, in PCA we live by the creed “it’s not just the cars, it’s the people” and the social aspect here is noticeably less. But if you want to drive, hard, long and strong, this is your format. Oh, and those Ferrari Challenge cars? They looked gorgeous, sounded even better, but gave point byes as well as the rest of us. There was no downside and considerable upside to having them there. David Murry has found a winning formula.

This concludes the Winter Diaries for 2015/16. Later this spring and summer look for articles on UCR member Dr Fareed Ali and his entry into international racing, a travelogue on the best way to see the Monaco F1 GP, a report on racing in the Stuttgart Cup and, if the timing works, a test drive in the UK of the second generation Cayman GT4 Challenge car with PDK. It is shaping up to be an interesting year. So for now I will sign off with the same declaration that Mark gives at each DMTD driver meeting – “Have fun, be safe and…most importantly… take care of each other”. 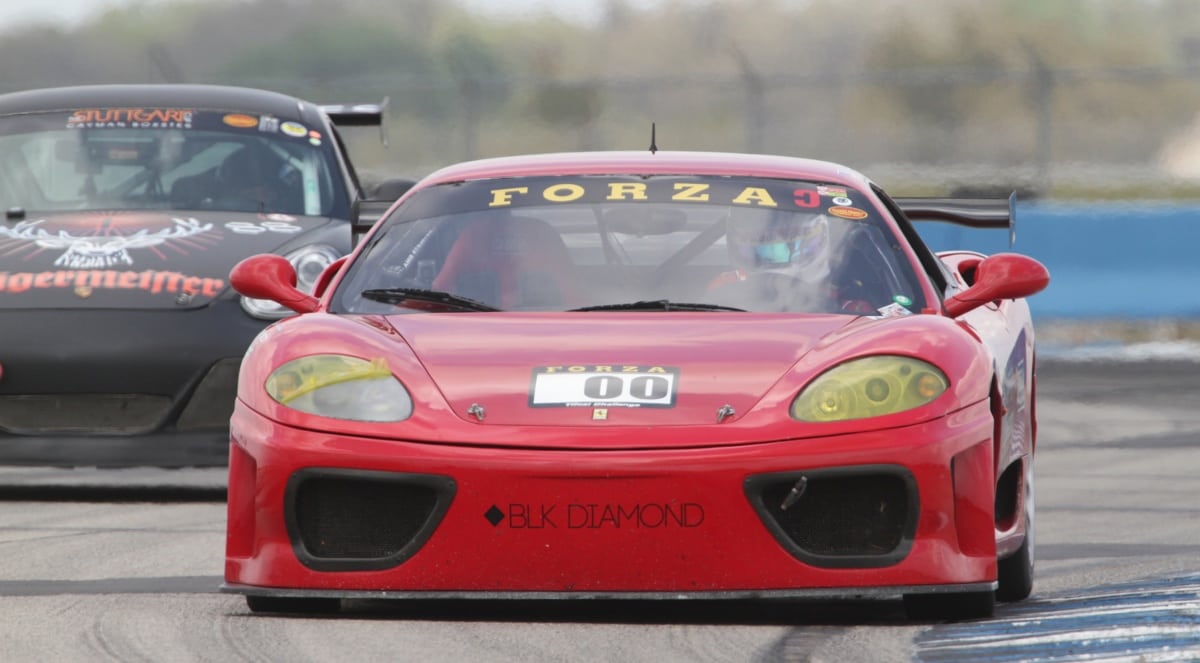 The Ferraris were out in force, but the Caymans were often quicker