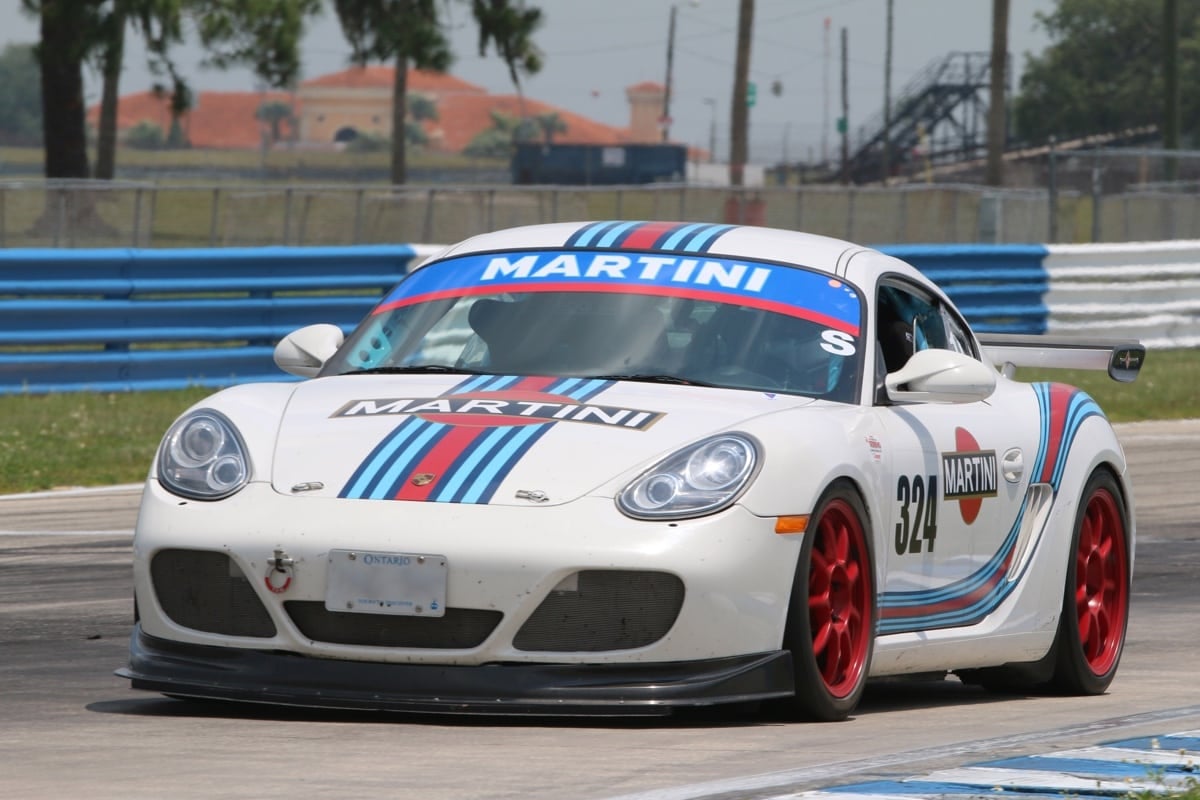 It is oft said that the best-laid plans of mice and men go awry. Sometimes though, things get lost in translation as it did for me last week. In last month’s issue, I’d written that this month’s article would cover the PBOC Winterfest at Sebring. And so it should have.  However, last week, my border collie Ben had other ideas and decided it was the perfect time to tear a small cyst—it then ulcerated and rapid surgical intervention was required.  Thus, the proverbial mouse was now a dog. No Winterfest for me.

So, I’m going to skip writing about Winterfest because I’d prefer to share a recent first-hand experience, rather than a memory from last year. This month’s episode from the land of sunshine and palm trees will focus on the first Chin Motorsports event I attended with my track car Martini this winter. It was just a regular Chin DE at Sebring but it was notable for several reasons.

First, the weather. For two days earlier this week, South Florida played host to some fairly spectacular weather, of the deluge variety. The first 24 hours saw my home area receive no less than seven inches of rain and we had almost as much the second day. Driving the 99 miles to Sebring was more an exercise in nautical naviga­tion than following the road signs. So I was very relieved to see a warm and dry track on Saturday morning. It is, after all, the dry season here.

I have previously noted that more and more drivers from north of the 49th paral­lel seem to appear at these events each year—and this weekend was no different, with a very distinct uptick. In all, there were probably well over 20 Canadian entries, many of them UCR mem­bers.

David and Mike Smith drove their new Cayman GT4s down from Toronto a few weeks earlier and this was the first time they’d been used in anger since the end of UCR track season. Jay Roth was there in his lovely 991 GT3RS (they are all lovely really, I guess), and I saw Brian Muir, and Bruce Trigg, who were “in between cars”. Lindsay Gillespie, a 25-year UCR veteran and current director of the Ferrari Club of America–Canada East Region, came along to the event photoshoot.

Jack Dertinger turned up, but without his Cayman S. He initially seemed pretty cheerful for a chap who’d clearly forgotten the prime reason for spending a few months in the sun, but by lunchtime, I believe he was drafting a speech to his wife with reasons why he should fly back home and just coincidentally get Mr. Cayman, who was (clearly and understandably) feeling very neglected at home.

Also in the paddock were Rick Morelli and Gerry Low from GTA-based DriveTeq(.ca). They travel to Florida with their clients during the winter—Rick says legendary Sebring is one of their favourite destinations. And then there were drivers who are not yet members of UCR but, after seeing what nice chaps we are, can­not wait to sign up. Yet another green Cayman R from Ontario was being ably piloted by Lindsay Rice—she declared not only that the event and the track were “unbelievable”, but also that she would definitely be joining UCR this year. I didn’t even have to twist her arm too much!

When you become a regular at the southern tracks it is not just the PCA friends you rediscover. I’ve come to make many new friends in all the groups I drive with in Florida. One such is René Meyer. Originally from Ger­many, he has lived in the US for many years and drives a blue 1973 Corvette that is the bane of my life. We’ve met at many Chin events. In the early days, we found that we were always running side by side—so each spring and summer I would work on my driving skills, improve Martini and come back to Florida hoping to see René in my rear view mirror and falling backwards. Unfortunately, René was not adhering to my plan as he spent his summers improving the ‘vette and his own ability. To this day, we still follow each other round Sebring as though we are attached at the hip!

Ring rust is a curious bedfellow, and he has visited twice in recent memory. Through personal circum­stances, I had a break from the track for some three months from April to July last year and then again from early October to this past weekend at the close of January. In my case, I find it takes about a half day to get completely reacquainted with the car and maybe a further four runs to get back to something approach­ing form. But having said that, I thoroughly enjoy the sensation of peeling away the verdigris of time-induced ineptitude—it’s a bit like revisiting your early track days, only with a very much accelerated learning curve.

At my request, on the Sunday at lunchtime, we herded together for a group photo. It was an eclectic mix with Cup cars, GT3s, Caymans of every variety, and a lone BMW 135i piloted by Trillium member Rick Clark. The banter was very Canadian of course, right down to Cup driver Gerald Panneton suggesting we needed something “typically Canadian” on show, and then hefting a sack of ice-melt salt onto the bonnet of his car for the group shot!

The track at Sebring is notoriously bumpy and rough (as I have mentioned before in my articles). This week­end, poor Martini was a victim of the beating given by the high-speed thumps and bumps. Turn 1 approaches you at well over 130mph if you are as good as Martini and as inept as me. You’re never going to negotiate the turn at that speed though. Depending on the car, your competence—and the track condition—somewhere between 80 to 100mph will be the max. In other words: not the sort of corner where, when approaching the upper quartile of that bracket, you’d want to hear a very loud bang from the rear of the car. And then experience the handling going to hell in a hand basket, at the speed of light! I absolutely refuse to accept that I was trying to put distance between myself and the Smith’s GT4 Caymans and thus travelling at an enhanced veloc­ity as a potential cause for the dilemma. I will accept that it took a feat of unbelievable skill to bring things under control. Oh, all right… I merely turned the wheel a few more degrees to compensate for the washout.  Coincidentally, we immediately went under black flag conditions for a heavy impact at Turn 5, so we exited the track.

A quick inspection by the Sick Sideways crew back at base revealed the culprit—a completely severed rear sway bar, or anti roll bar, for you Queen’s English readers.  An hour scouring the paddock turned out to be a fruitless exercise in trying to locate a replacement, so off came the whole thing—and with some trepidation, I drove without it. Well that was a revelation! It caused some looseness at the rear end around nearly all the course and increased the understeer quotient a little, but all that was to be expected. What I did not expect was the transformation of the bumpiest corner in the whole of motorsport—the infamous Turn 17—to be tamed!  Lap after lap, I found that out there at T17, Martini rapidly closed in on the very fastest cars, because she loves to take the corner with no control over the rear end. Nerve wracking, I grant you, but just one of those accidental discoveries that leaves you rethinking the basic tenets of car setup.

There is now a full three days to wait before Martini and I are on track again for PCA’s annual 48 Hours of Sebring. The event spans four days so I have no idea why the name remains mathematically incorrect. Brandon Comella, another CTMP Cayman regular, is flying in from Rochester for this great event and we plan to have a blast both on and off the track.  Stayed tuned for next month’s report.

Previous articleTake a Cayenne on a Fun Run or an Auto Cross? WHY NOT?!!
Next articleCONFESSIONS OF A PAST PRESIDENT

THE PORSCHE-PHILE – An interview with Auguste Lecourt of St Catharines, ON