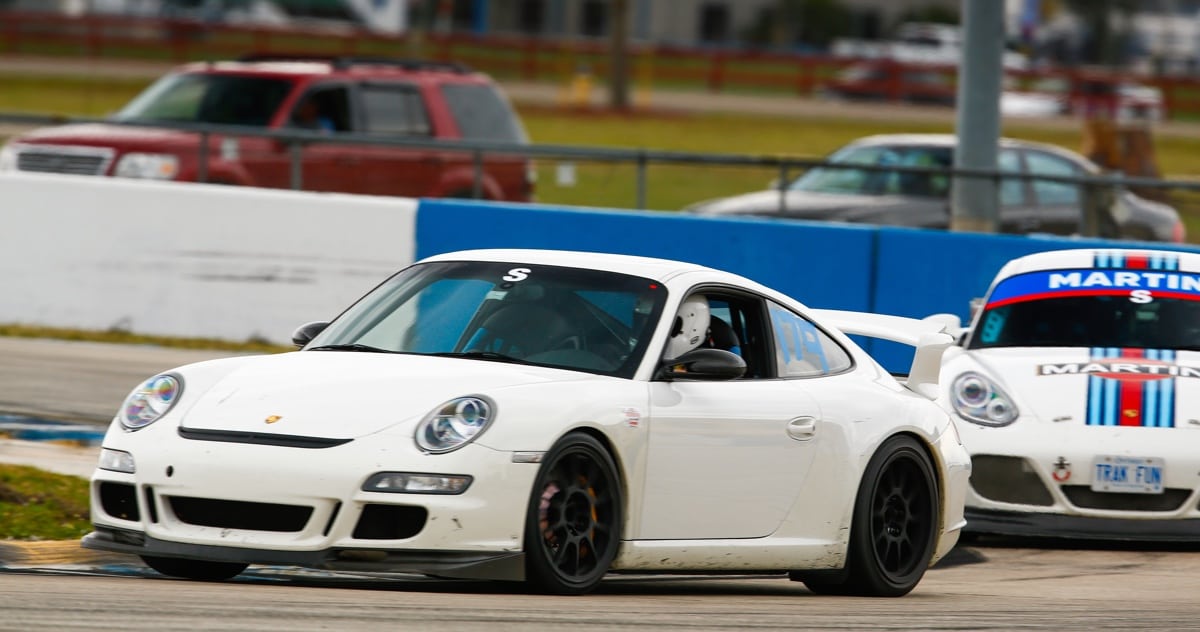 The PCA 48 Hours of Sebring followed hard on the heels of my first event back on track down here in Florida – just three days for the Sebring based Sick Sideways crew to check out Martini and have her fluids and everything else prepped ready for a fresh technical inspection. Brandon Comella, my Cayman driving friend from Rochester, NY flew in for this one and we traveled up to the track in time for registration on the Thursday lunchtime, and a one hour advanced DE session in the late afternoon. 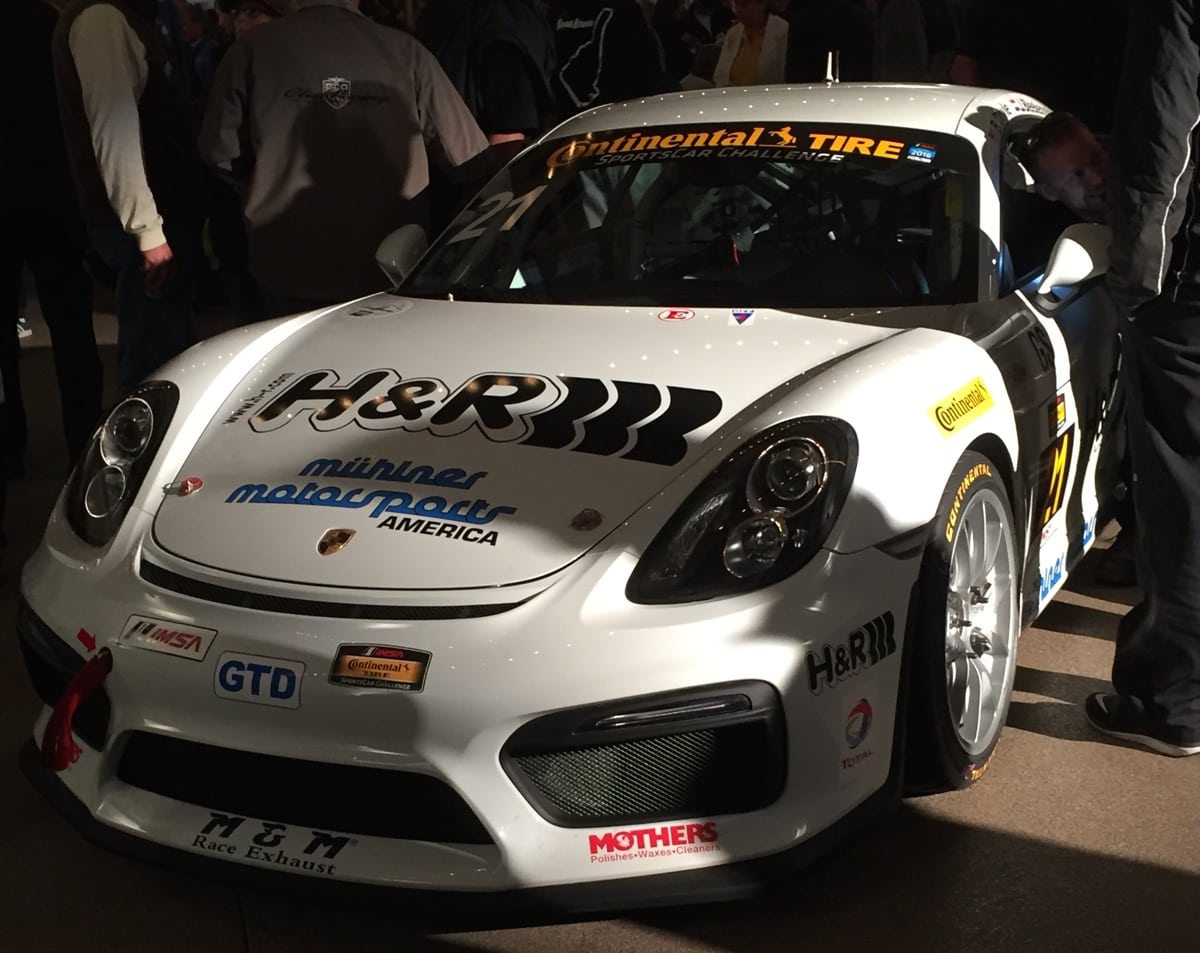 The event is ably organized by Suncoast Region – quite a feat given the size of the entry list. The paddocks are full to over­flowing with trans­porters and trailers and track cars of every shape and size from all corners of North America. One of the benefits of our Sick Sideways team taking 1st, 3rd and 4th in the Mazda MX5 Cup last season, is that they are now on a very different financial footing, are fielding no less than 7 Cup cars through the upcoming season, and have pur­chased a wonderful rig to provide support to the effort. If you have ever wondered what it is like inside of one of those huge 53’ tractor trailer rigs I can now tell you. Calm, cool, well lit, and spaciously serene. I for one was expecting to be mobbed for autographs when emerging from the sliding glass doors – and I was of course disappointed!

I have said before but it bears repeating, if you wish to take part in the 48 Hours be ready to sign up as early as possible – it sells out fast. If you want to stay trackside at the Château Élan you need to book in late summer or fall, well before the event itself opens for registration. The bar and restaurant become party central for the after hours socializing, and it is nice to be able to just wander up to your room when it gets late.

The cool of the new trailer rig was much appreciated that Thursday afternoon as temperature and humid­ity had even the locals sweating and commenting upon it. Brandon and I, and maybe 40 other Porsches from professional Cups to road-going historics, took to the track and had a great time on a good surface with tons of grip. I had thought that an hour would not really require my Coolshirt system and came to regret that decision about halfway through as I could feel the sweat puddles starting to form on my seat! It was over all too soon and the day continued with more race practice for a number of classes. 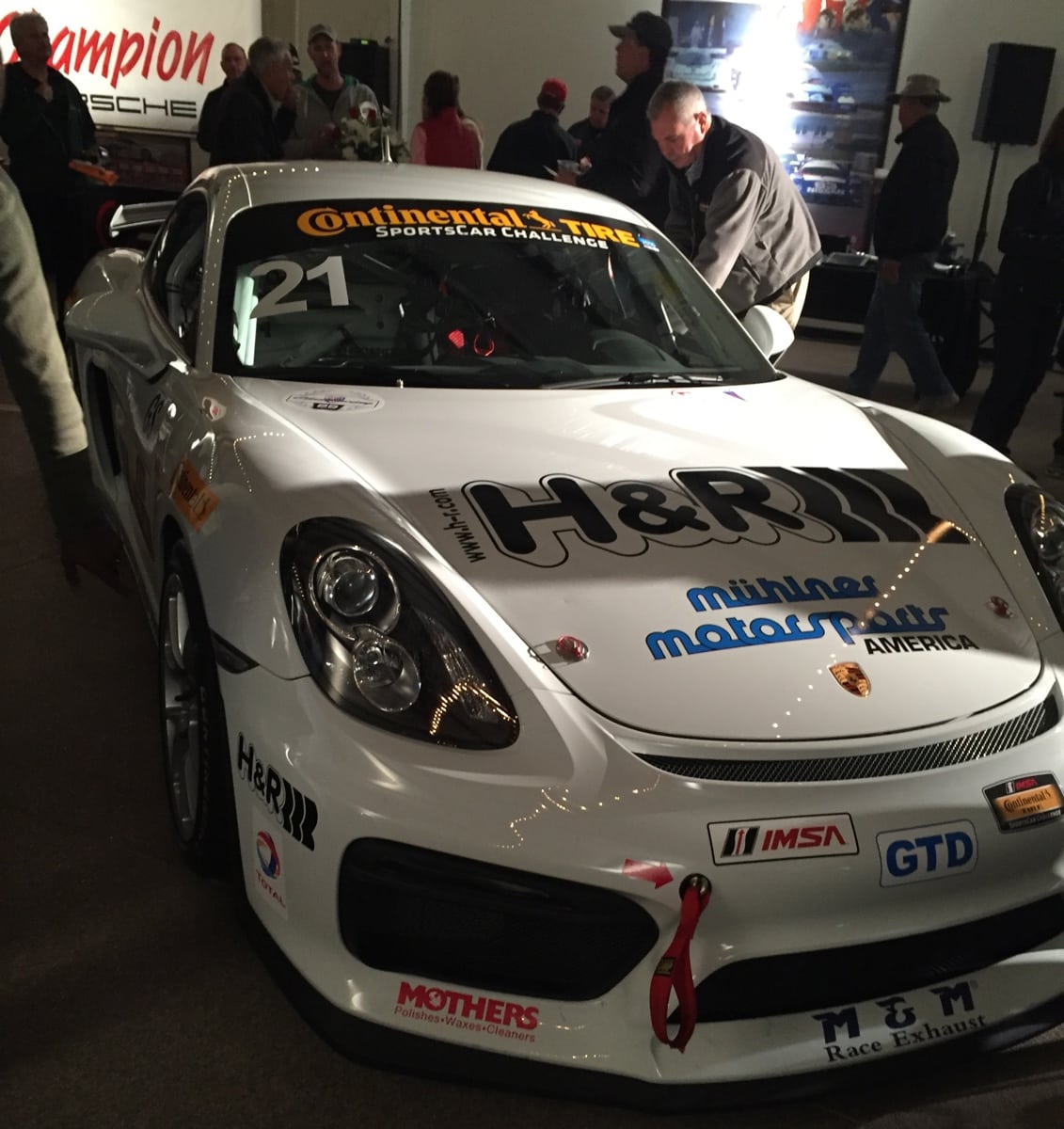 Friday dawned much cooler and damper. The DE group was out first each morning at 07.15 or 07.30 – no doubt to be used as a sort of very large and noisy track dryer. You don’t see too many drivers complaining, especially when the fog, which is so common in the early morning at Sebring, stayed absent the entire event. With 50+ cars on track in our group it was good to find most moved along quite briskly and a noticeable lack of ‘trains’. It was at once a fast, calm and polite session.

A first for the event this year was a vendor show in­stead of the traditional dinner in the Hall of Champions building. Lots of interesting stuff to see and vendors to chat with. But first, the star of the evening. On display was a brand spanking new Cayman GT4 Challenge car, and to talk us through the design philosophy Suncoast had brought in Bernhardt Müehlner of Müehlner Motor­sports. Also there was Justin Cockerham of Performance Friction C, the company that Porsche has chosen to develop the brakes for this race car. After his presenta­tion I took the opportunity to talk with him about the ‘ice pedal’ issue that plagues Martini and so many other Caymans that are used hard on track. The discussion and my on track experimentation has brought about some very interesting results which I will share at length in a later issue, watch this space!

Representation of UCR was pretty good again this year. Not so many drivers perhaps but Walter Murray and Neal Dowdell flew in to promote the UCR Club Race and the flyers for our premier event were everywhere. Ernie Jakubowski was in attendance and racing in SP3. That is worthy of a story in and of itself. At the same event last year Ernie suffered a heart attack and was hos­pitalized in Sebring before being medivacced back to On­tario for surgery. A year later and he was back and racing once again. A remarkable enough feat – but of course Ernie just had to be Ernie and so won his first race. Unfortunately, the second did not go so well and resulted in a detonated motor. I happened to pop over to his trailer as he came in with the tow vehicle in the pour­ing rain. We chatted as he stripped off his soaking wet gear and I could not help but notice that he was smiling broadly from ear to ear. The guy just loves his sport and refuses to be downhearted or despondent, true Canadian grit, eh?

As is usual at these big events I met with a lot of new faces and made some new friends. Some you meet in the paddock, some in the bar – but the best introductions are made as a result of some close driving on track. I delight in both seeking out a driver I have enjoyed watching and in receiving the same sort of approach myself. This time I met another driver as a result of an interesting incident. He was driving a beautiful bright red 991 Turbo S and coming up the front straight I gave him a point by. Into turn 1 and as I followed him round in less than ideal conditions the back of his car stepped out for a moment as we closed the apex very close to the inside wall. He made a great correction and when I came back in I went over to say ‘well done’. That sort of thing is what makes our sport great, recognizing the achievements of others and giving them credit – even in a non-competitive event. It is how lasting bonds and friendships are formed and underscores the PCA slogan ‘it’s not just the cars, it’s the people’. 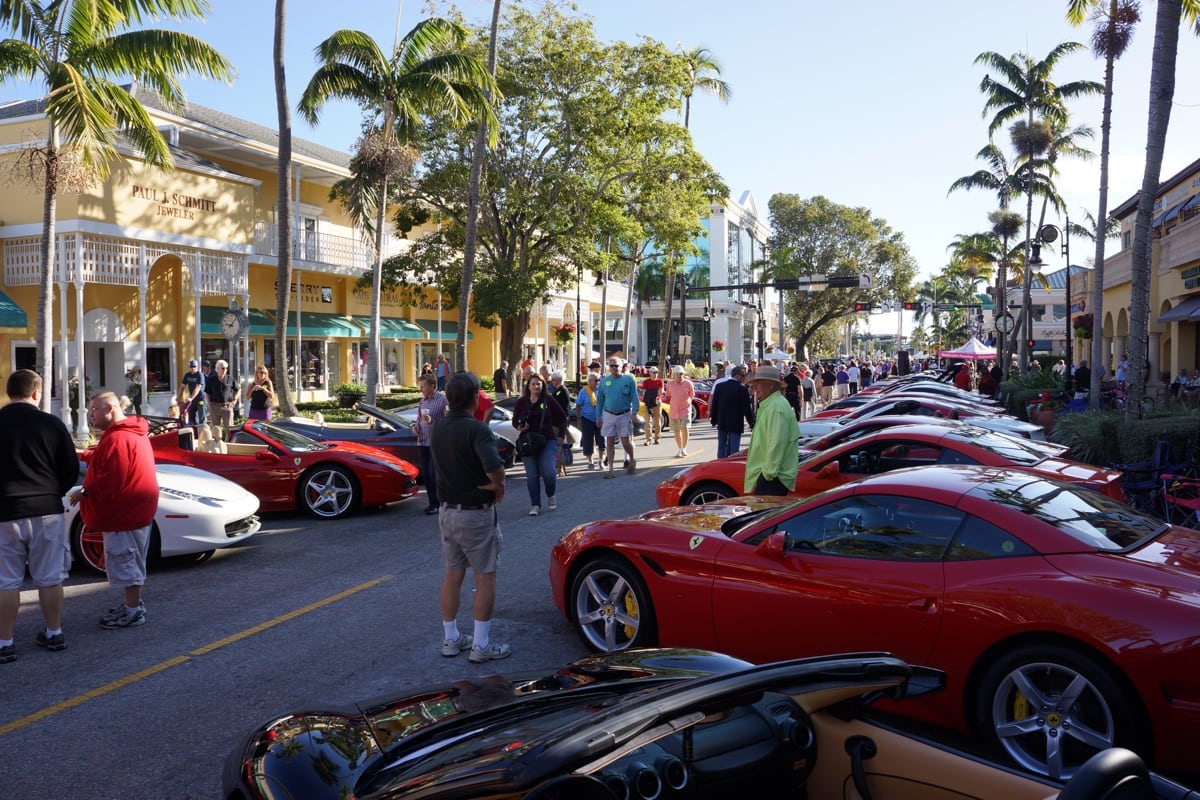 If you ever get bored with track activities while down here for the winter, there are other automotive distrac­tions. Take ‘Cars on Fifth’ for example. This is an annual event hosted by the Naples Ferrari Club which has almost the entire length of Fifth Avenue South closed off as it becomes one of the ritziest parking lots found anywhere on the planet. 400 plus exotics congregate to provide an open air show which features roughly half Ferraris and half a blend of Porsches, Lambos, Koenigseggs, BMWs and the like. A fabulous show and I ‘discovered’ it this year because UCR stalwarts Dave and Mike Smith were working the show as volunteers.

I am writing this as I sit waiting for my next run at yet another PCA DE at Sebring, my 10th track day in just over four weeks. Martini is getting to feel like an old and very comfortable glove with the amount of seat time I have in such a short period. Next weekend I will be here again for the HSR races as I am considering that as a way to enter racing in the most ‘gentlemanly’ way possible. The following weekend is a David Murry open track weekend here – I will write about that and the HSR races next month. Then there is a weekend off before another Chin event and then on the 22nd April my final event of the winter season.

Previous articleUCR SKI DAY
Next articleMY SPORTS CAR IS BIGGER THAN YOURS!

The Little Car That Could – Part II