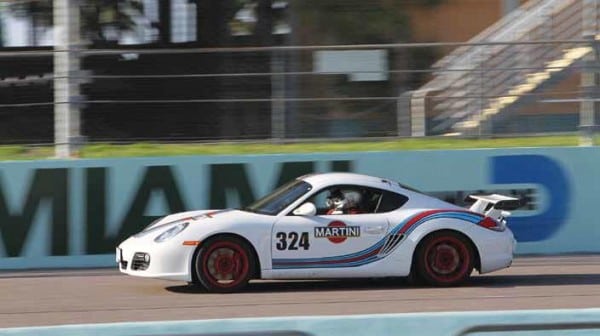 The end of the winter season approaches, the days are growing longer, and the temperatures in south Florida are rising. Soon it will be time to think about packing up and heading home. But before I do that there are another three track events for me over the next six weeks, all of them at Sebring. There is just so much track activity in Florida during the winter that most ‘trackies’ will find themselves limited only by their budget or spousal tolerance!

In the last two weeks I have attended a midweek floodlit evening ‘test and tune’ at Palm Beach International Raceway (PBIR), a weekend DE run by the Suncoast Region at Sebring and a DE run by CHIN Motorsports at Miami Homestead Raceway. Let me take you through this busy period. 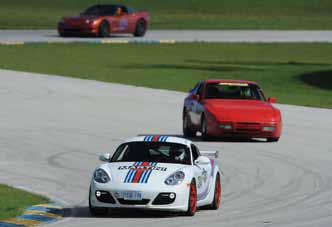 Before Christmas, the Cayman’s freshly installed X51 3.8 GTS motor was giving problems. Not the motor per se, but the ECU had been upset somehow and was having a little sulk. I could not engage Sport or Sport Plus modes, the intake manifold flap valves were not operating properly and although she never went into limp mode, it was clear Martini was not a happy lady.

After some research, I shipped her off to John Tecce at BGB Motorsports near Daytona. His shop pretty much makes a living from making manic Caymans—and to very good effect. Last year their number 38 car won its class in the Rolex Series and took third overall—all without factory support. Martini has benefitted enormously from their expertise and Tecce now estimates about 375hp at the wheels—or as Rolls Royce always used to say about horsepower in their sales literature, “sufficient”.

After some time sorting out Martini, Tecce and I met at PBIR for a shakedown. I had not been there before, had not driven a track at night and did not know what the new characteristics of the engine would be. It was an interesting evening under the floodlights with Palm Beach Driving Club. Tecce had somehow managed to get us in to an event that is normally open only to members of the club, and membership starts at $11,000 a year. It didn’t cost that much, but it was still expensive at $500 for a 2.5 hour session, which included a catered dinner. Let me say that no corner workers and less-than-stellar floodlighting on an unknown track, huge differentials in cars and driver abilities, and no point by system made for an interesting time!

We survived and it was clear Martini was running much better. She was accepting and holding the sport modes and sounded a whole heap better. Fun, but not something I am anxious to repeat. Cons: short course, limited paddock and facilities. Pros: got to meet Shane Lewis, excellent food, and a very interesting mix of cars. A veritable fleet of Radicals and a team of Ginetta G50 and G55s which were blisteringly quick. My Sebringbased shop that stores and transports the car, came and collected her from PBIR and agreed to have her ready for the following weekend at my Florida home track. 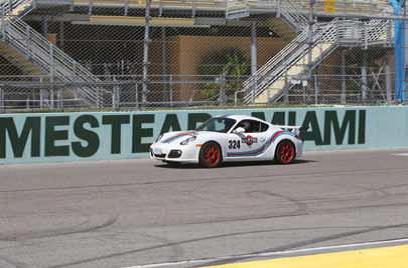 The next weekend was my first event with Suncoast PCA region. The club does not operate the tower; that is done by Sebring’s pro staff. There is no set volunteer rotation, just a general request for tech line assistance. Free beer and pizza were provided at Friday evening check-in and tech. This particular weekend they were implementing a new sign-off policy which had a lot of people—including the instructors—confused. I was required to run in the student group on the Saturday, which was frustrating given that one ‘run’ is in the classroom and on track the cars were pretty slow, but I like to think I exhibited that famous Canadian politeness at all times. I eventually had a check ride on Sunday morning. To say it went well would be an understatement—my checker had started with some fairly aggressive questioning on flags, stations and escape routes but enjoyed Martini so much he ended up whooping and hollering and exhorting me to go ever faster!

Sebring revealed just how quick Martini has become under BGB’s spanner. She now has torque with a capital T. I was short-shifting around much of the track to gently introduce myself to the new velocities—even doing so I could go much quicker because there is just a wall of torque. To quantify: T10—old entry speed 110mph hanging everything out, now 120-plus, short shifting; T13—105 vs 115; back straight—131 vs 143-plus. That is huge.

Brakes went off one time until I backed off a bit—Tecce agrees with me that Sebring is ‘brutal’ on brakes and is sourcing a GT3RS master cylinder to replace the GT3 unit. An ITC splitter has finally arrived and will be fitted before the March Sebring event. So, finally, the 3.8 conversion has been worthwhile

and Martini is a genuine pocket rocket. We reeled in all sorts of Porsches: 911S, no problem. GT3, no problem. GT3RS, count ‘em, four, I think. GT3RS 4.0—just one, but I am guessing a sleepy driver! Just to put myself back in the box, I have to admit I was no faster than one of the instructors in an ‘82 full race 911 with just 250HP. It was, however, about eight feet wide with the biggest wing and rear tires I have ever seen on a 911. 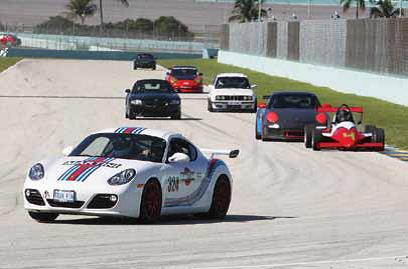 And so, on to Homestead. I had feared Homestead would be similar to Daytona, but it is not at all. The course we ran does not use any of the banked turns, so speeds are much lower. I didn’t see much more than 125mph. It is a whole lot more technical and all the more interesting for that. At 2.2 miles and 14 very interestingly mixed turns I will be heading back there again and looking forward to it.

Good facilities with lots of nice clean garages and plenty of power outlets provided. Worst thing about the place was the diabolical food, there was a choice of hot dog or cheeseburger, and no French fries because the fryer was on a work-to-rule. Instead, they provided chips which could have applied to the Guinness Book of Records for recognition as world’s most stale. The guys

from Sick Sideways did the smart thing and ran out to Panera Bread on Sunday to get lunch, unfortunately I was MIA when they took orders!

With Martini showing pronounced understeer at a couple of corners, the weekend saw my intro to trail braking, with coaching by Sparky, one of the pros at Sick Sideways. He won the NASA National Championship two years ago and now races in the Playboy Miata series

with Sick Sideways. I had been feeling quite good about my laps until he jumped into the left seat and immediately showed how slow I was compared to a good pro. Then he had me work on that trail braking technique and with very good results. Could I match his speed? Maybe, if I work on one car and one track for, oh, seven days a week for about 10 years. When Dave stands at Mosport giving his first drivers meeting of the season in a month or two I shall know exactly why he says we are not racing—at least in my case: it would be a total waste of time! 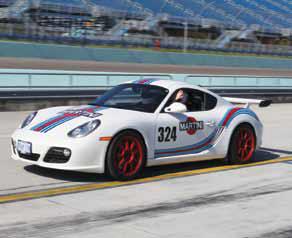 So I hope that this short series has perhaps whetted a few appetites to try out the Florida winter track scene. Apart from the suntans, they are just like us down here. In fact many of them are us! Remember I was MIA when the guys at Sick Sideways took the lunch orders? Well it was a moment of Canadian national pride that had me missing; I rounded up five Ontario drivers and had us pose our cars for a group photo shoot. And we didn’t mention the hockey gold medals once to our hosts—honest! Four of us are UCR members: Carl Kafarowski in his immaculate Dodge Viper, David Saunders in his Lotus Evora, Bruce McIntyre in his GT3, myself and also non-UCR John Barban in his Boss 302 Mustang. We caused quite a ruckus in the paddock!