Winter is red – Tracking in Florida

UCR members who know me will find the following statement hard to understand. There is a DE run by Chin Motorsports this weekend at Miami Homestead and yet I have decided to stay at home. Walter Murray will be there and can fly the UCR flag this weekend. Read on and you will see why.

Greetings from Florida are probably not going to win me any friends as Ontario residents remain gripped in the depths of frigidity and enforced labour courtesy of the town snowplow. But fear not, by the time you read this I will be back on Georgian Bay enjoying a dose of winter. Just long enough to remind me that winter really does exist before heading back down for April in the sun.

So what do I find to do here as a retiree and fully paid up member of the Canadian Snowbird Association? Those that read my ‘Winter Driving Diaries’ in Provinz last year will have a fair idea. I bring my trusty Martini Cayman and hit every track in the region. I have never spent very much of January in Florida—until now.

Well did I ever miss out! Just what I missed will be the focus of this little travelogue.

January in Florida has to be the most intense track environment anywhere at any time, there is just so much to choose from. If you like to watch motorsports up close and personal there is plenty to see, including the Rolex 24 Hours at Daytona where the stands are virtually empty as the crowd parties on the infield!

In the last month I have driven with two PCA regions, Chin Motorsports and PBOC. Given the time and inclination I could have also included David Murray Trackdays, Performance Drivers Group, Palm Beach Driving Club, Hooked On Driving and have added Daytona, PBIR, Road Atlanta, COTA and others to the repertoire.

But one only has so much time and Martini needs to have her consumables replenished; when you have this much track time the list of ‘consumables’ goes beyond the normal tires, pads and fluids to things such as wheel bearings, ball joints and rotors.

Had I elected to head down to Homestead this weekend it would have been the fifth weekend in six that Martini and I would have been on track. And that does not include midweek events! So in the course of a little over a month we have experienced the equivalent of an entire season of UCR DEs. You don’t need me to tell you what that sort of seat time does for your car control skills—or your bank balance.

This year we were not alone in representing the Mosport regulars. Winter Driving Diaries seems at least partly responsible for guest appearances by Wallace Bradley, Dave and Mike Smith, Jack Dertinger, Chris Bourdos, Ernie and Margaret Jakubowski and others.

Brandon Comella a regular Mosport visitor from NNJR even followed my path and sent his Cayman R to Sick Sideways for the winter. He has not regretted his decision and now flies down at every opportunity; we have a blast.

Our very own immediate Past President, Walter Murray, has also been seen at Sebring this winter driving his very nice new black GT3. Asked how he was enjoying himself he uttered something suitably Scottish which roughly translated to “Turn 17 has to be the bumpiest in the whole of motorsport”! Few would argue that observation.

Two events in particular stand out for me: the PBOC Winterfest and the PCA 48 Hours of Sebring. Both are multi-day events that include both sprint and enduro races, and Des, which include a night driving option and autocross. If you intend to try one next winter I heartily recommend the experience, but be prepared to book your hotels before registration opens and be ready with your finger on the ‘send’ button the moment registration does go live.

Personally, I had a wonderful time both on and off track, meeting new and interesting people, bumping into UCR stalwarts such as Bill and Hella Comat, and finding interesting old and new cars with owners only too ready to talk about them. What about an original Le Mans winning GT40? Check. A peerless 356 Cabrio? Check. A car I lusted after in my schooldays? Healey 3000 Mk3, check. A vendor of a brand new line of HPDE specific shirts? Check – I did buy some and they are fabulously comfortable besides being fire retardant.

At the events I sometimes get fired up to write to some UCR buddies that like to receive emails from the sun blessed tracks now and again [if you would like to be added to the distribution list just drop me a line to trakfun@gmail.com]. The following was from about two weeks ago:

I awoke this morning with a nasty feeling that one of those dreaded head colds was about to hit me. Tongue like sandpaper and the colour of Sebring’s run-off dirt, a woolly head and a general feeling that I was experiencing another age related reality check.

Probably it had more to do with the 110 percent humidity and the fact my noisy, through-the-wall air conditioner had run flat out all night, than any virus. Once again I was at Sebring for a Chin Motorsports event, just two weeks after the PBOC Winterfest which had taken a full four days of my time, one and a half sets of tyres and an amount of fuel that I do not wish to think about.

This morning it was WET; humidity sky-high and a cold front bringing bands of Florida-sized showers and squalls. For the first time ever in my experience the drivers’ meeting was held under cover and then when the rain on the tin roof drowned out the speaker, inside the Reeves hospitality suite!

Old Sebring hands know full well where the small lakes accumulate on track but it always bears repeating that the painted checkers for the start and finish line on the front straight are like ice in the wet. I have personally seen a professionally driven car total onto (yes, onto) the concrete barrier wall because he did not know that particular dirty little secret about this track.

Off to the cars, and there was a tangible reluctance to be the first to venture out onto the track. Sick Sideways are supporting a fleet of ten cars this weekend and they make an eclectic bunch – MX5 Cup cars, Honda S2000s (one turboed to 500hp), a brand new Z06, Lotus Exige Clubsport, Nissan GTR with variable boost to 1,200HP and Martini.

I creaked into the seat, strapped in and headed out for the warm up session. Yep, puddles, more puddles, small lakes, medium sized lakes and standing water all along the front straight. Lots of cars going very slowly but at least we got a decent look at the less than ideal surface conditions.

This morning there are no fewer than three McLaren MP4-12Cs out to play. Unfortunately one of them stuffs into a wall in the first Red Advanced Group run. Not terminal, but not something you want to do in a $300,000 car either. Clearly the deformable nose did its job. Unfortunately an Aerial Atom does not have a deformable drivers side suspension and the one that was next to us in the paddock did not survive the first run either. There are nearly 50 cars in my Blue Group run which prompts me to register for a check ride for a move to Red. My head feels no better after the first run, which was pretty sparsely populated out on track. I had declined fitment of my wet tires because the forecast and radar promised bright weather ahead. They both lied. So a slippery start to the day.

By the second run the weather had brightened some and with the very stiff breeze the track was drying nicely. A white Cayman R proved extremely entertaining to follow, the driver wringing every last ounce of it and working very hard to keep it between the curbs. I waved off the offered passes and just enjoyed watching some very nice driving. Only later did I discover the car was piloted by Chin’s chief instructor! Our tires and brakes were nearly identical which must mean that Martini is very well set up because I had no trouble following him lap after lap.

Lunch gave me time to head back to my hotel room gulp a couple of aspirin and gargle for a while with Listerine; that felt better. A call from Sparky (my coach) alerted me to a hastily scheduled written test at the Chin trailer to be followed by a check drive. Written test done and a suitable fuss made of Mark and Maria’s Labrador Trixie and it was out for the test drive. Well, Red Group is certainly quick and it made a refreshing change to have to offer some point-bys for a change! But we took advantage of a few that were offered and after 20 frenetic minutes I had earned my new wristband.

The first full red run was a LOT of fun. Martini showed herself more than capable of staying with some very quick machinery. I must say there was a particular satisfaction in catching and passing an MP4! There were three fully supported and heavily sponsored GT3 Cups out there putting in some blistering laps.

“OK”, I thought, “let me see if M can tag along behind the slowest of them.” And she did. Bit of a wild ride and we kept running out of brakes (even with the new ducts with electric fans) but a thrill ride nonetheless.

Yeah, I know, drive your own track, not the other guy’s…so I backed off and pulled into the paddock to discuss a change of pad type with Sparky.

The day finished for me with about 40 minutes driving in Happy Hour, the signature Chin feature of running the final hour on track open to all groups. That was not the end of the day however. Chin ran a two hour night session from 6pm to 8pm.

After my experience of Sebring at night at the PBOC event two weeks earlier I knew this held no interest for me. Sparky asked if he could take Martini out to give rides to two of the ladies of Sick Sideways and I was happy to agree. Watching the session from the hotel was fun and relaxing, Martini’s rotors glowing brightly as she braked hard for the hairpin.

I should perhaps add that in Sparky’s hands M blasted right by the slower of the GT3 Cups and managed to keep the quickest in sight, not too bad, not too bad at all. 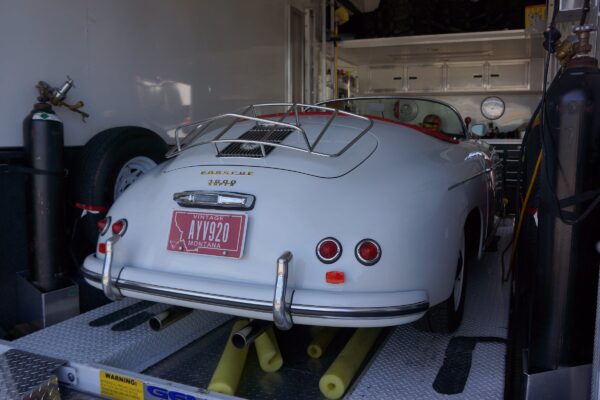