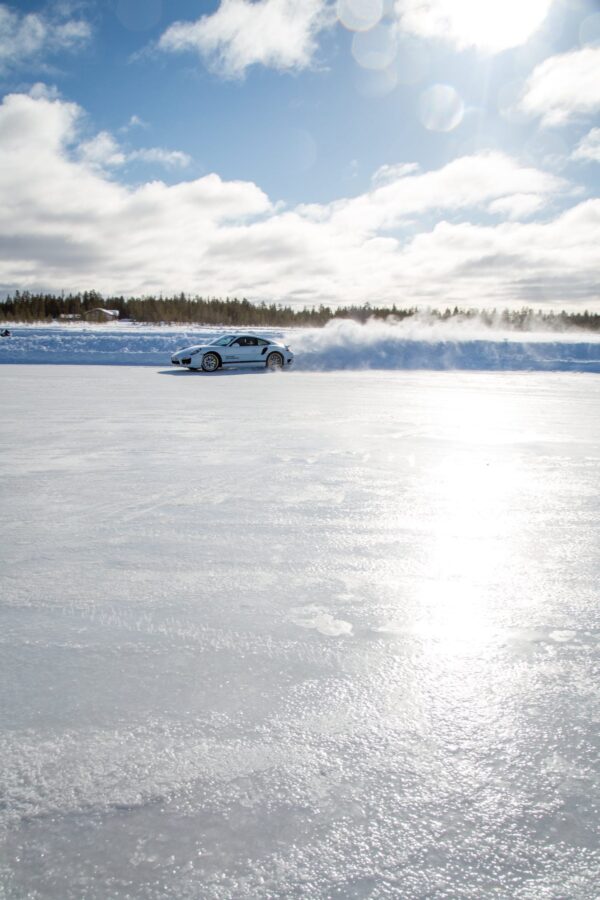 My winter track driving seat time was not south but north—north of the Arctic Circle, in fact. I was thrilled to be doing Ice-Force Master, an Advanced Winter Driving Experience, with Porsche Cars Canada and track buddies in Levi, Lapland (Finland) in March.

Howard Dexter of Dexter Autosports organized our group of nine from the GTA and Kitchener-Waterloo area and quarterbacked the trip. This was a committed group of track drivers, some with racing experience, Dexter Autosport drivers and dedicated UCR DE’ers. Our gang included: Brent Byers, Geoff Chandler, Howard Dexter, Barry Dickson, Doug Fregin, Abe Reinhartz, Brad Usherwood, Courtney Walsh and myself. We had so much fun at Camp 4S in Quebec last year that we put Finland in our calendars for winter track driving for 2014. And what a fantastic learning experience we had! 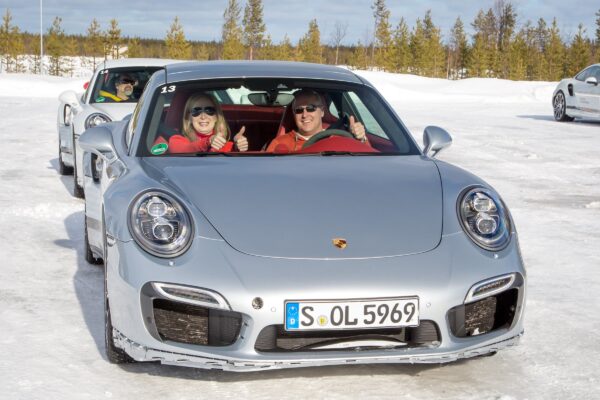 Porsche and track talk started immediately as we departed in the wee hours for Finland. I was pumped. A fleet of brand new Porsches awaited us to drive for the next three days on ice tracks that would be more challenging than our Camp 4S experience. I heard that the cars and the tracks would be faster and the speeds would be higher, thus taking the techniques of entering and exiting a skid and carrying a drift to a new level. I felt like the luckiest girl in the world.

The hotel where we stayed was truly Finnish, with Scandinavian decor and dinners of fondue and reindeer. The School had 40 students in all—from Australia, New Zealand, Germany, Canada and the US. The landscape was pine forests everywhere. The tracks were on a frozen swamp, which they start to prepare in the fall. There were seven different track configurations that I recall, with two being exact replicas with a ratio of 1:5 of trademark European tracks—Spa in Belgium, and Catalunya in Spain. We also had dog bone tracks and large-and small-circumference circles to tune up our constant drifts. 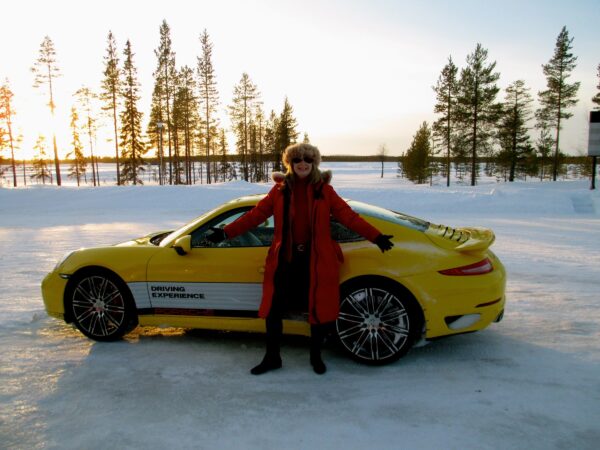 The Porsches—oh the Porsches—were beauties: 911 Turbo S, 911 Turbo, C4S, Cayman S and Boxster S—all 2014 models. All were prepped with 4mm spikes in the tires. Our mission was to learn the different car configurations with varying horsepower and torque, and how the handling of the Turbos differed from the C4S, and from the agility of the Cayman S and Boxster S. Blue, red, yellow, white, black, grey—we chose our favourite Porsche colours like candy. 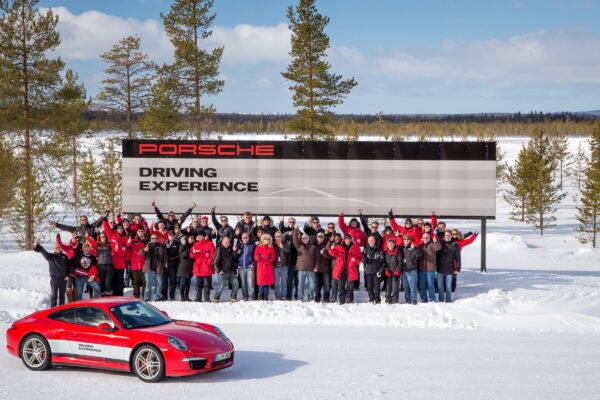 The difference between Ice-Force Master and Camp 4S was noticeable: more seat time and a higher expectation of skills. Last year we spent time practicing the rally flick and drifting techniques and incorporated them on the tracks. This year, we had to know how to do them in our sleep to successfully navigate the tight, narrow and challenging corners of the handling tracks. Sure, the first morning was tuning up on a slalom course to enter and exit a drift but the momentum picked up quickly to the next course to do a rally flick and then immediately drift a half circle and finish with drifts through a slalom course. The sessions had a very quick pace with constant movement and no line-ups or waiting. I knew I was in with a hard-core group of drivers, racers, instructors and I wondered how I would do.

My first challenge came when I got queasy after the first morning session. I excused myself from the next exercise while I hugged a tree. I’m sure everyone, including the instructors, thought the girl had folded already. I had some lunch and went back out with the gang. I found out I wasn’t the only queasy one and I handed out my organic non-drowsy gravol like crazy for the next three days. It worked like a charm.

I missed no more sessions. I listened attentively to the instructors on the radios we had in each car and to my co-drivers Brad, Abe or Courtney—they are exceptional drivers and give impeccable advice. I am a visceral person, so I know by the feel and the feedback of the car if my technique and line is right or off. We all helped each other and cheered each other on. The camaraderie was high. Of course, we teased each other on the radios when someone spun out with all eyes watching, stuffed the beautiful Porsche in a snow bank or beached it on top of a two-tier snow bank and had to get towed out by one or two Cayennes. Everyone heard everything on the radios, so egos were humbled quickly. The tradition continued—whoever had the worst snow bank stuffs had to buy a round of drinks that evening at the bar. 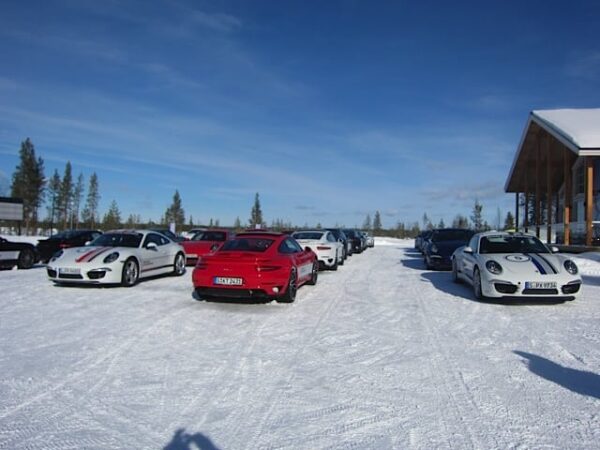 I had a blast of a time. I learned tons and hope to transfer these skills to my track driving and on the roads. I strive to improve. I am a car enthusiast.

How did this girl do? On the final evening at our Farewell Dinner I was recognized as “one of the guys” by our gang, perhaps the biggest compliment that could have been given. They complimented me on my commitment, facing my challenges, my successes, and frankly, nailing it in the final session. I got in the “zone” when I drove on my own in the last session and everything came together for me. I didn’t see this coming, it just happened. I felt a rhythm and flow with my flicks and drifts, transitioning right hand hairpin turns to left-handers with no time to think. I felt I could have done lap after lap on what was the fastest and toughest handling ice-track and two tracks combined. I felt great. I didn’t feel I was going fast, but I heard Lars, our instructor, and Brad who were in the car behind me come on the radio yeehawing saying I was keeping pace. I was proud of myself and I knew the guys were proud of me too. I received the Recognition Award that evening from the instructors for our group for showing the most improvement. A Porsche! Well, a 4-inch limited edition replica of the instructor Porsche Turbo, but I look at it with a smile. We all got advanced to Ice-Force Master S, the next and final level. 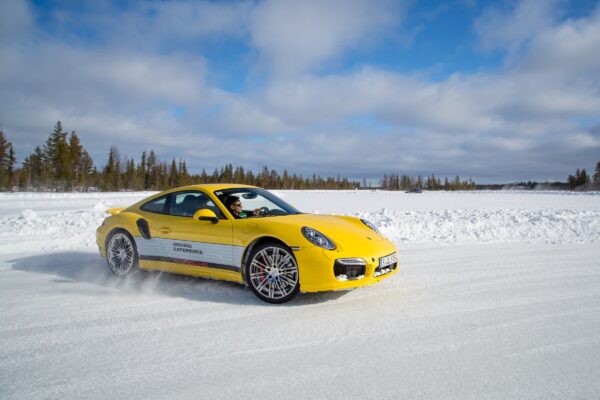 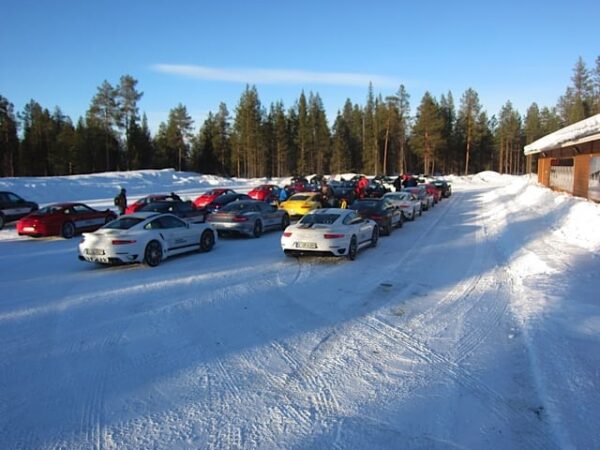 A huge “Thank You” to Lars Berg and Niko Castrup, our two Porsche instructors extraordinaire (and racecar drivers), who gave us precise feedback to challenge and push our skills. We appreciate their dedication to us and we hope to get them to CTMP someday. And a big thanks to Jennifer Cooper, Drive Event Manager with Porsche Cars Canada, who listened to our every lie on the bus or at the bar. Also, to Gus Haddad, the US member of our gang and we hope to see him again at a track here someday too. I was able to catch up with Neil Drew, of PCA Melbourne; I met Neil and his wife Phyl, on my Croatia Trip with Porsche Travel Club last fall. Neil brought his two sons to Ice-Force Master and was with a great group of Aussies and Kiwis who had way too much fun too. To Howard for organizing our group and Brad, Abe, Courtney, Brent, Doug, Geoff and Barry—I had a blast of a time and I think we all feel like the luckiest people on the planet to share such a great adventure. We love the Porsches, but it really is about the people. 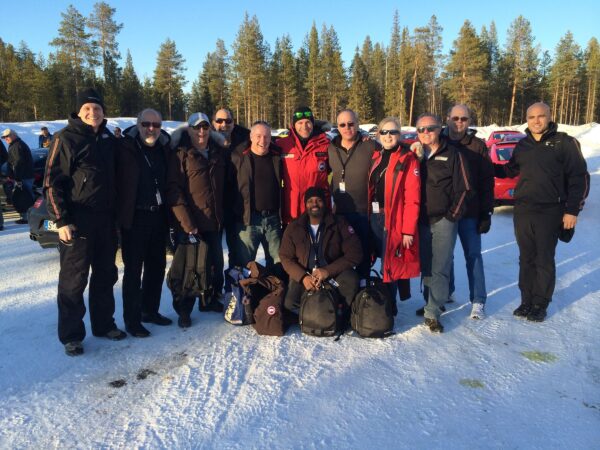