By Phil Downe, UCR Member and Founder of the Yorkville Exotic Car Show 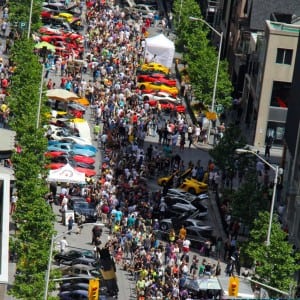 Oh, what a Day! On Father’s Day, Sunday, June 16, 2013 I awoke at 4am and peered nervously out the window to find the streets were still dry. “A glimmer of hope”, I thought as rain, at times heavy, was in the forecast. Perhaps our luck would hold and the 4th annual Yorkville Exotic Car Show would once again be saved with a lucky break in the weather. All those hopes were dashed by 6am when a consistent drizzle began to fall.

It’s a terrible feeling when you realize months of planning and the work of a dozen volunteers was about to get washed down the drain. There isn’t much we could do about it. You can’t control the weather and the city won’t provide a rain date for such a large-scale event on one of Toronto’s busiest downtown boulevards. All you can do execute the plan and hope it clears up.

Bloor Street, Toronto’s answer to Rodeo Drive in Beverly Hills, had been closed off at 6am between Bay Street and Avenue Road, so we started setup. The metal barricades and stanchions were dropped in place and we made a decision not to lay the red carpet. If you can’t get it to tape solidly to the ground in the wet it just turns into a trip hazard, wet or dry so we left $10,000 worth of carpet sitting in the back of the truck. 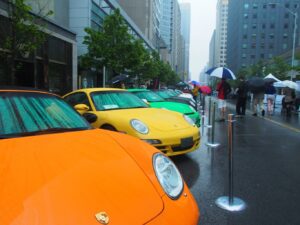 Staging in the rain, but then
the sun came out!
Photo by Ronan McGrath

The sponsors were reluctantly setting up and as I drove by each in my golf cart in what was now torrential rain. I tried to keep everyone motivated even if I wasn’t feeling so myself. “Don’t worry. It’ll all clear up by noon.”  “What a crock”, I said to myself, hoping I didn’t appear the fool.

The big surprise was that cars were showing up in their pre-staging areas on time. I assumed we might end up with 30- to 40-percent no-shows, but only eight of the 120 registered cars didn’t make the trip in, and some cases drivers just brought a worthy rain-day replacement.

Everyone just stuck to the roll-in plan and one by one the car corrals, a dozen in all, started to take shape on Bloor. Then, as if on cue, at around 11:30am the rain stopped. Yes, it was sheer luck but I heard people claim everything from the power of combined force of will, to good karma and Divine intervention. Whatever it was, the result was perfect. The sun came out and every driver just popped the trunk, got out their detail kit and started to wipe down their rides. 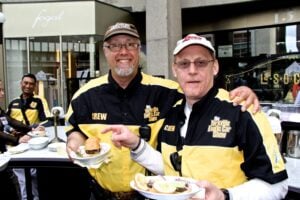 I can’t really explain the exhilaration of going from bust to boom with that abrupt weather change. Within the hour we were hosting the largest group of spectators in our history. The confirmed crowd estimate from Toronto Police and Special Events was between 70,000 and 80,000 visitors, which was simply astonishing for a five-hour event.

This was also the first year that a formal team was put together to run the event. I can’t thank these people enough for committing themselves doing such an incredible job. I’d like to introduce everyone else to the team now known simply as “the CREW”: UCR members David Elsner, Garth Stiebel, Ronan McGrath and Kye Wankum, plus Arnaud Majstorovic, David Biesinger, Dave da Silva, Robert Cutler and Ray Bedessee made up the core team. Thanks everyone. I’ve never seen such a willingness to take on assignments and cover each other’s back when needed. 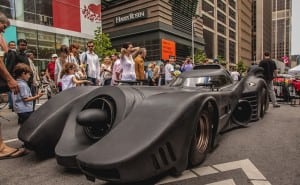 Of course, we would be nowhere without our sponsors. We don’t charge an admission fee and never have. It’s our sponsors that cover all the expenses and what’s left over goes to the charity. This year we were once again anchored by the Bloor-Yorkville BIA, who have a fabulous team led by Director of Marketing, Rick Kaczmarek. The Bloor-Yorkville BIA represents all the businesses and retailers in the Yorkville, area so they directly fund the lion’s share of the budget and have done so since our inaugural event four years ago.

Petro Canada’s Ultra 94 was the platinum sponsor for the 2nd year in a row. Gold sponsors included Porsche Cars Canada, Ltd, Grand Touring Automobile, Elite Custom Car Storage, Garage Living and the Hudson Bay Centre. Silver sponsors included McLaren Toronto, AutoOne Palladini and Porsche Design. We also set a new record with 23 Bronze sponsors this year, each of whom donated $500.00 in support of this event. That’s obviously too many to mention here but they are all listed on our website at www.YorkvilleExotics.com. 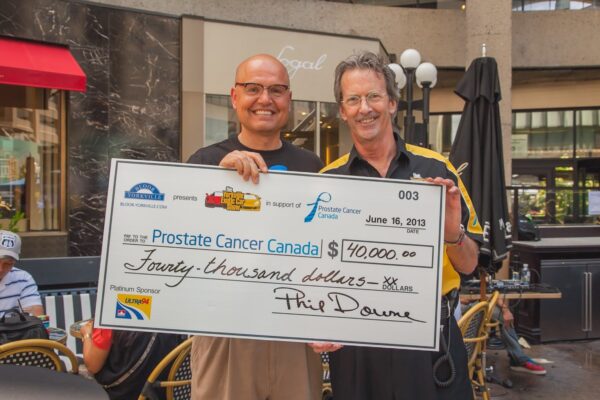 I’d also like to thank my sister, Heather Downe, who gave up her vacation time to fly up from Fredericton, NB to help out during the final critical week and also run the Paddock Club for the day. She and her hostess team of Alanna, Anna, Deja, Jacelyn, Mandy and Marsha did a fantastic job and I can’t thank you all enough.

Finally, a big thank you must go out to every driver who braved the storm that Sunday morning and made the drive despite the pouring rain. Thank you again for that commitment and to the forty-five of you who also donated $100.00 each, well that’s another big thank you. We raised $40,000 for Prostate Cancer Canada in a five-hour event, plus had a lot of fun doing it. What could be better than that?

So that’s a wrap for 2013. We’ll be back again next year, bigger and better than ever. You can check out our photo and video library for the 2013 Yorkville Exotic Car Show on our official website at www.YorkvilleExotics.com. Until then, thank you all once again and be safe out there.