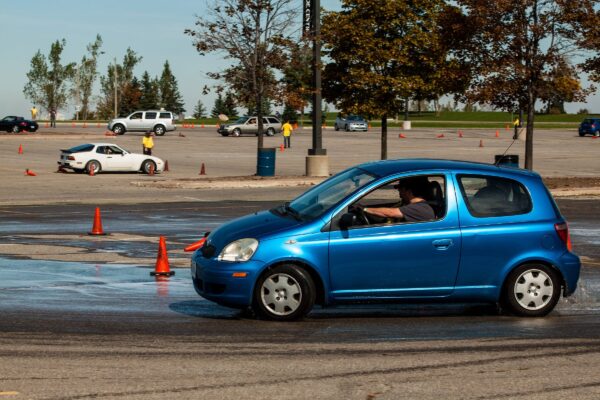 Continued from the March Issue of Provinz. Originally published on Autos.ca and reprinted with permission.

Visibility Inside a Transport Truck

Sit in the cab and get a first-hand look at what  a truck driver sees—not much. That pickup 100 feet  behind you? Not visible. Vehicles on your right? Nada.  Vehicles in the lane to your left? A sliver, if that. You’ve  likely heard that “if you can’t see the mirror on the truck,  the truck driver can’t see you.” After sitting in one of  these behemoths, you’ll want to add, “unless you can see  their face in the mirror, they probably still can’t see you.”

Gather around a small, innocuous looking box with  a couple of wires running to it. It’s just an airbag, it can’t  hurt us, it’s supposed to protect us in case of an accident.  Cue slow-motion crash test video with airbags blossoming  out of the dashboard, like fluffy down pillows. The  key term there is “slow-motion”. And those videos are  usually silent as well. In reality, that airbag inflates with  the sound of a shotgun blast. It’s essentially a balloon attached  to a bomb. In a collision, these protective devices explode in your face with deafening force. On a day of confidence-building exercises, this particular demonstration served as a sobering reality check – once you got past the “Explosions! Awesome!” bit.

Laid out on the ground were an array of tools: hydraulic cutters, spreaders, air pads, you name it. Members of the emergency response team detailed the process of getting people out of a wrecked car, what they use and when. It’s not like in movies where the cavalry rush in and disassemble the car like a NASCAR pit crew. In the real world, they must first secure the scene, examine the vehicle, even download a schematic so they know how to safely access the cabin (for example, to avoid accidentally triggering an uninflated airbag). Those who wanted to flex their biceps were welcome to go up and wield one of the hydraulic rescue tools. After lunch, the other group went inside for their second in-class session while my group finished up their rotation through the stations. An hour later we convened inside while they reconfigured the course in the parking lot for the combined exercises. It had been five hours of driving and learning, and the breather was welcome.

The third in-class slideshow was punctuated by a texting-while-driving documentary/PSA. It was the kind of video where the lights came on afterwards and everyone just sat there not saying anything for a while. Heavy stuff, but a necessary reminder that a seemingly trivial matter like responding to a text could have catastrophic consequences.

Our group went outside for the final time to tackle the combined exercises. The skid pad was now arranged as a figure-eight, leading to an expanded evasion course. The slalom station was now a full-on technical course, complete with a couple hairpin turns and a decreasing radius turn near the end that caught more than one driver off-guard.

Despite the tricky corner, there was a visible improvement with every driver I observed: overall velocity was increased from earlier in the day and cornering was tighter and more precise. However, the noise level was definitely higher. Whether it was driver fatigue, the higher speeds at play or the sheer exuberance being demonstrated on the skid pad, the parking lot echoed with the sound of engines and tires and the occasional cone being mowed down.

The course is not meant to be a replacement for regular driving courses such as those offered by Young Drivers. Rather, it’s meant as a supplement, to cover situations outside the norm. You don’t want to be caught in a situation where you have to engage ABS, but you practice so that you know what to expect. You’ll hopefully not be running into stationary obstacles, but now you’ll know how to maneuver around them. But they tell you in the classroom that the vast majority of these scenarios can be entirely avoided by staying alert and being aware of your surroundings, which is easy to say, but difficult to do. Which is why we practice.

One final time into the hall: the students received their certificates and the volunteers were recognized for their efforts. It’d been a long day – many were up well before dawn to ensure everything was in place for the students’ arrival at eight in the morning. Then it was a full day of standing in the sun or riding shotgun next to a relative rookie through a battery of emergency maneuvers – definitely not for the faint of heart.

This program is only possible because of the people involved. Not just because of the technical skill they possess (everyone I spoke to had autocross or Driver Education experience), but because of their passion for driving and their sincerity when they engage with students. I was absolutely gobsmacked to see so many volunteers in the hall that morning. But they’ve sat in the car with the students, they’ve watched from the sidelines, and at the end of the day, even a casual observer like me can see the improvement not just in their skills, but in their confidence behind the wheel. It’s incredibly rewarding—“get up at 5 a.m.” rewarding, apparently. 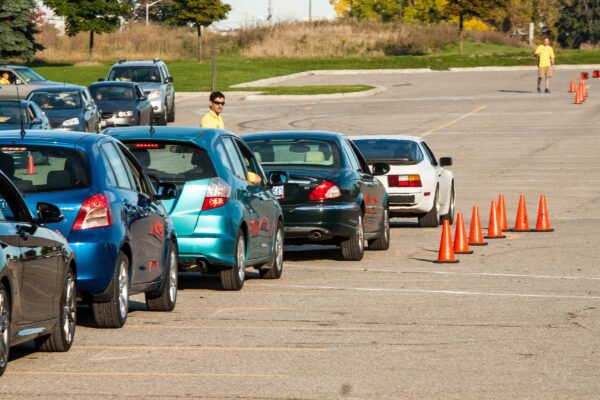 Glowing endorsement aside, I obviously have to nitpick because this is a proper review. I had a problem with some of the illustrative diagrams, mainly that they weren’t very illustrative. For example, a series of tire track imprints was used to demonstrate the levels of tire inflation and the resulting effect on grip. Since they’re photographs, the difference between the three images wasn’t immediately obvious. This was an instance where a line drawing would have served better.

To their credit, the organizers are very much taking student comments to heart and they do review and update the course materials. Which, by the way, are taken wholesale from the Tire Rack program based in the States. That means US statistics, and distances measured in miles. But units are easily converted by the instructor in class, and I don’t imagine there being a marked difference between US and Canadian traffic incident figures – we probably see more moose-related incidents.

The key figure here is 70 percent – in Canada, 70 percent of accidental deaths in the 15–25 age group is due to motor vehicle accidents. It’s the kind of number you hear that sounds absurdly high, but it’s the unfortunate truth. I had a good time on Sunday, everyone was in high spirits and enjoyed themselves, but this troubling statistic lurked in the background. It’s why they encourage young drivers to attend the program.

Lastly, I’ve talked about Martin Tekela and Mario Marrello, but I would be remiss if I didn’t also mention Isi Papadapolous, who handled the registration, and Hazel de Burgh, who plotted out the closed courses, marshalled the volunteers, and ran around with a camera taking pictures of the event. And of course the 50-odd volunteers who manned the stations and coached the students.

The Tire Rack Street Survival School currently runs twice a year: spring and fall. The cost of the program is $75, which, at the risk of sounding like an As Seen on TV infomercial, is an incredible value. Again, this is only possible due to the pool of unpaid skilled labourers otherwise known as BMW and Porsche Club members. You even get coffees, donuts and sandwiches, oh my! Students must hold a G2 or G license (or equivalent) in order to participate.* All cars are welcome, with the exception of older SUVs and pickups without traction and stability control since they have a higher centre of gravity and are otherwise prone to rollovers. Regardless, you’re going to have a more difficult time if you go in a 1973 Cadillac Eldorado. Further details are on the course website, and you can see photos from past sessions on their Facebook page. 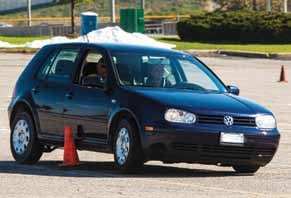 * Since I’m equipped with only a G1 under Ontario’s Graduated Licensing system, I was not eligible to participate in the driving portion of the day’s events. It meant I was able to observe the students as a group and was free to speak to the staff. I’ll be signing up soon though!

We Have a Plan